We spent the entire weekend packing and moving and unpacking and getting settled. We're still not completely finished, but I'm really looking forward to getting rid of all the boxes and feeling like we actually live here and not like we're making forts out of boxes like 5 year olds.

To top off the moving madness, this week has been a little {extra} crazy. My poor grandma has been in the hospital for the past few days {she's ok, thank goodness!}. The entire contents of my closet is still at our old apartment, so I've mostly been walking around in pajamas, possibly even to the store. {Not obvious looking pajamas... don't worry.} My phone has been acting all crazy and hung up on a prospective employer mid-conversation. Twice. And then on the representative from our cable company that it took me 10 minutes to get on the line in the first place. {I wish I was joking.} My Google reader is ridiculously backlogged with about 100 posts that I'm dying to read, but haven't had time to. {Ok, so this isn't a problem problem, but it makes me very crabby}.

Needless to say, the theme of this week has been WINE! : The Poor Woman's Alternative To Therapy.

But woman can't live by wine alone {I lie. Woman can, but husband definitely can't.}, so in the midst of my stress and pity partying I decided to whip up some homemade gluten-free gnocchi a few nights ago as our first "real" meal in our new place. Because, you know, making something ridiculously sticky and messy doesn't add to one's stress at all. 😉 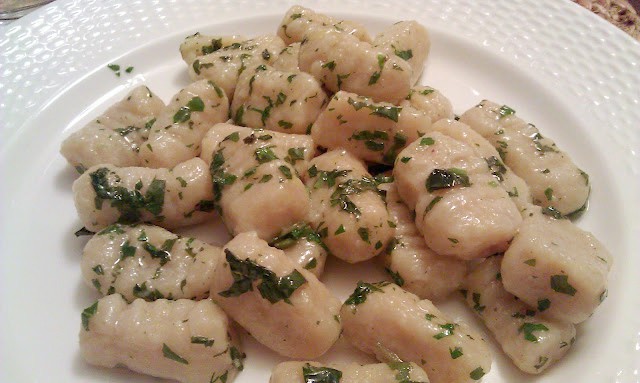 The reason I even attempted these Mascarpone and Lemon Gnocchi was because I miraculously had the exact ingredients I needed for the recipe in our nearly barren fridge. {And because I happened to see them on an episode of Giada at Home - while starving - during the 2 minutes I sat down that day}. What are the odds? That was enough of a sign for me.

Thankfully, they weren't as time consuming as you'd think, and didn't turn out to be nearly as messy either {which is probably a good thing because I may have just lost my $*#@ cool if one more thing went awry this week}. And, once again, the hubs completely cleaned his plate. Glad I didn't serve a Pinot Grigio dinner after all. 🙂

You should definitely give these a try. Because if I could do it with completely frazzled nerves and the majority of our belongings in boxes scattered around me, then you certainly can, too!

Mascarpone and Lemon Gnocchi
adapted from Giada at Home

For the Gnocchi:
1. In a large bowl, combine the mascarpone, egg, egg yolk, nutmeg, lemon zest, Parmesan, and salt. Using a hand mixer, beat on medium speed until light and fluffy, about 1 minute. Gradually beat in ¾ cup flour until the mixture forms a soft dough.

2. Sprinkle a pie pan or rimmed baking sheet with flour. Using 2 small spoons, drop 1 teaspoon-sized pieces of dough into the pie pan. Shake the pan gently to cover the dough with flour. Gently roll the pieces of dough into oval shapes. {I found it easier to flour my hands and pinch off teaspoon fulls of dough, rolling them between my hands to get them lightly floured. Then, using the tines of a fork, I rolled each ball of dough to give them their ridged appearance.}

3. Bring a large saucepan of salted water to a simmer. In batches, carefully add the gnocchi. The gnocchi should sink and then float to the top. As soon as the gnocchi begin to float, cook for 5 to 6 minutes. Drain and place in a large serving bowl.

1. In a small saucepan, warm the oil and salt over medium-high heat for 1 ½ minutes. Remove the pan from the heat and stir in the basil. Let the mixture sit for 5 minutes to allow the flavors to blend.

2. Add gnocchi to the pan and gently toss until coated. Serve with a BIG glass of wine! 😉