When I think back to my childhood, a few special treats stand out, but none quite as vividly as Croquettas de Jamón. Cuban Ham Croquettes were ever-present at parties and occasions, from birthday parties to weddings to christenings. I couldn't get enough!

A few years ago I tried my hand at making them at home, and much to my surprise, they weren't as complicated as I anticipated, but they were just as addictive as I remembered them.

While I grew up knowing these little delicacies as a savory Cuban appetizer, croquettes are a savory finger food that can be found worldwide with many variations depending on the region.

Making croquetas de jamón is a bit of a process, but none of the steps are terribly difficult. Maintaining an organized setup helps keep things running smoothly while making the filling, breading, and frying the croquettes.

First, make the béchamel mixture. Melt the butter in a large, deep skillet; add the flour and whisk until smooth. Gradually whisk in heated milk and continue to whisk and simmer the mixture until it is smooth and creamy. When it's thickened sufficiently, you should be able to run your finger through the mixture on the back of a spoon without the line running back together again.

Next, add ground ham (I used a package of deli ham and ground it in the food processor), lime juice, parsley, salt, and pepper. The mixture will come together like a paste. Cook it for 3-5 more minutes until the mixture is thick. It's ok if it doesn't look like it will hold its shape when rolled into croquettes; it will thicken as it cools.

Scoop the mixture into a heat-safe bowl -- I actually prefer a shallow cake pan for this so that the mixture cools faster. Let it cool to room temperature, then cover and refrigerate for 2-3 hours or until chilled and scoopable.

Just before the mixture is done chilling, set up a breading station. In a shallow dish, beat an egg. Place breadcrumbs in another shallow dish. Line a baking pan with foil.

Using a tablespoon sized scoop of ham mixture, create croquettes (about 1 ½ inches long, ¼ inch in diameter). Dip each croquette into beaten egg, then roll in bread crumbs. Set on lined pan. Repeat until all ham mixture is used (You may have to take a few breaks to wash your hands because breading is a messy business.). You should have about 45 croquettas de jamón.

Breaded croquettes can be refrigerated overnight until ready to fry. In fact, I think they hold up better in the frying process when they're allowed to "set".

Preheat the oven to 250 degrees -- this is going to be a warming station for fried ham croquettes so that they don't get cold while you finish frying the entire batch.

Heat about 2 inches of oil in a heavy bottomed skillet to 375 degrees. Line a sheet pan with paper towels.

Add croquettes to hot oil in batches of about 5-6 at a time, turning often, and fry until deep golden brown. This will only take about a minute for each ham croquette, so be sure to keep an eye on them and keep them moving. I like to take them out just before they're deep golden brown as they tend to deepen in color a bit more once removed from the frying oil.

Remove with a slotted spoon and place onto paper towel-lined pan to drain of excess oil. If not serving immediately, keep croquettes warm in the oven until ready to serve. (I like placing a cooling rack on top of a pan so that the hot air circulates around the croquetas and keeps them from getting soggy.

Some people like to serve croquetas with a squeeze of lime juice, but they're just as delicious without it.

Where did croquetas originate?

The original "croquettes" were first created in France, where they were made with a potato filling. However, as the best foods often do, their popularity as an addictive finger food gave them worldwide acclaim. Many countries have their own versions of croquettes, all with their own beloved fillings.

Sure! You can use gluten free flour or rice flour (or whatever you normally use for thickening), and swap regular breadcrumbs for gluten free breadcrumbs.

Can I make ham croquettes in the air fryer or oven?

Technically yes... although, when I tested them in the air fryer, they didn't hold their shape very well. If you're going to temp air fryer ham croquettes, I would either freeze them completely or make sure they are very chilled before placing them in the air fryer. Mist them lightly with oil and air fry for about 6-8 minutes or until golden brown and heated all the way through.

Can croquetas be reheated?

Yes! Place the croquetas on a baking pan (or a cooling rack on top of a baking pan for better heat circulation) and bake in a 350 degree oven for about 8 to 10 minutes until crisp and heated through.

Can croquetas be made with other fillings?

From bite-sized appetizers to hearty entrees and desserts, try out these recipes to satisfy your cravings for Cuban fare: 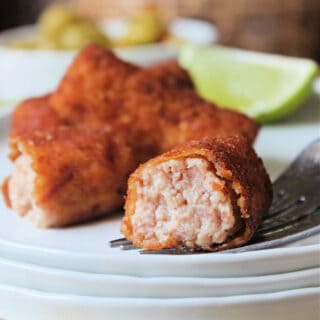 To reheat croquetas:  Place the croquetas on a baking pan (or a cooling rack on top of a baking pan for better heat circulation) and bake in a 350 degree oven for about 8 to 10 minutes until crisp and heated through.
« Bocaditos (Cuban Finger Sandwiches)
Asian-Inspired Stuffed Peppers »