Ah, it’s great to be able to breathe! And taste! And, well, move!

As I mentioned in yesterday’s post, I’ve been a bit under the weather. While I’m still not quite feeling 100%, I’m back and ready to share some new and exciting things. Ok… exciting to me, bearable to you. Whatev.

I know the 4th of July was over a week and a half ago, and while I’m obviously late to the party, I figured it’s better to post about it now rather than 6 months from now when it’s really obsolete. Although, honestly, when is cake ever obsolete? Never!

My mother-in-law asked if I would bake something to bring along to their 4th of July get together and I was more than happy to oblige. She had no specific requests, but I knew it had to feed over a dozen hungry party-goers, be tasty, and of course, look festive.

In true Dianna fashion, I chose to stress myself out challenge myself by trying out Swiss Meringue Buttercream, a frosting that I had not yet added to my baking repertoire. After doing the requisite research, I decided that I could – and would – master SMB for this project, as well as a new piping technique while I was at it. {As a side note, I should mention that unless you are prepared to fail miserably and start from scratch or come up with an alternate plan, you should probably not cook something for the first time when you are making other people eat it. Do as I say, not as I do. Just sayin’.}

So, back to my research. I already knew that I wanted an easy, predictable cake – one less variable. The 1-2-3-4 Cake recipe from the back of the Swan’s Down cake flour box makes for a simple, tasty layer cake that comes together quickly. I decided on a simple layer of fresh strawberries between layers. For the buttercream, I found a great tutorial from Sweetapolita, and got to work.

Like a good little baker, I read through the directions to make sure I had all the ingredients and understood all the steps before getting elbow-deep in egg whites and sugar. And then… I saw it. “It” being the amount of butter the recipe called for. And I couldn’t believe my eyes. {No, really. I called Steve over and made him look to make sure I wasn’t hallucinating.} ONE POUND OF BUTTER?! WTF?? {What The Frosting, obviously. Potty mouth! :P}

After the initial shock passed, I marched on with the SMB and said a little prayer that I wouldn’t kill anyone by bringing their arterial flow to a screeching halt with a butter barricade. Sometimes you just have to trust that people will have self control {or really good, heart healthy genes}. 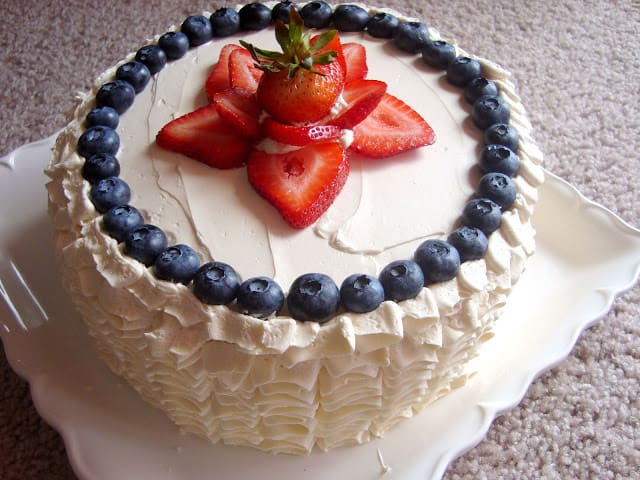 So, guess what? My SMB turned out great. And guess what else? I couldn’t bring myself to add that 4th stick of butter, so I only used 3 and it was still just fine. And my final discovery? I don’t particularly enjoy Swiss Meringue Buttercream. {Oh my, I feel like a mob of food bloggers may end up at my front door with torches, ready to oust me for muttering such blasphemy. Yikes.} 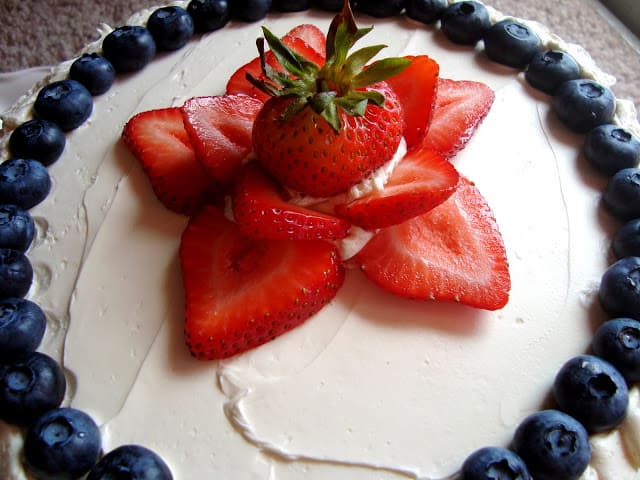 SMB isn’t for everyone. If you are the type that salivates at the thought of rolling a stick of butter in sugar and taking a bite, then by all means, give it a try. At the risk of sounding like an idiot {oh, wait… lol}, this buttercream tasted a lot like… butter. Sweet, light, fluffy and delightfully smooth butter. But butter nonetheless. And as I’m pretty sure I’ve mentioned before, I’d much rather take my calories in the form of cheesecake or sweetened condensed milk right out of the can. And that’s all there is to say about that.

{It does, however, make for a lovely frosting to decorate with I must say. Check out the quick tutorial on making SMB ruffles. So easy and SO pretty!}

The good news? Everyone loved the cake. Both the presentation AND the flavor. {Although I did notice about 50% of the crowd left the outside layer of frosting on the plate.} And the even better news? Everyone was still alive & kickin’ when they left the party. 😉

So, if you want to make your own layer cake with “killer” SMB, find the recipe I used here. {And remember you can leave out that last stick of butter.}

**P.S. This particular 3 layer cake required making 2 batches of SMB for filling & frosting. I only used about 1 full batch and a little over 1/4 of the second. 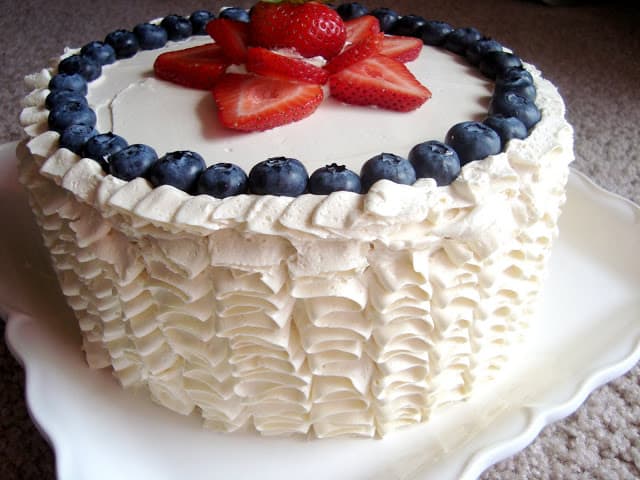