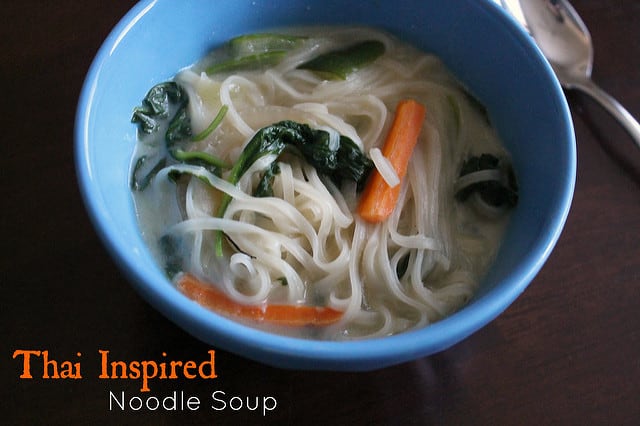 How were your holidays? Did you wake up yesterday feeling a little sluggish? Bloated? Hungover? {I know, those pretty little champagne bubbles somehow turn into bowling balls the next day...}

The time has come to step away from the cookies and fatty holiday foods, put the wine glasses back in the cabinet, and trade in the eggnog for egg white omelets... I know, it's hard to say goodbye, but I promise I'll try to share some recipes that will make it all worthwhile.

It seems like we've been doing nothing but eating and drinking and celebrating for weeks. {Oh wait, that's because it's true.} It all started with Thanksgiving, then a trip to New York in early December {which I will be telling you all about very soon.} where we ate, and ate, and ate and our diet pretty much went downhill from there.

While we were in NYC we ate lunch at a Thai bistro where I had some of the most delicious dumplings I've ever tasted. Well, it actually wasn't so much the dumplings themselves, but the sauce they were in. Ridiculously. Good.

I've been trying to recreate & perfect the recipe at home, but I haven't quite gotten there yet. What I have gotten is quite a craving for Thai food, which is why I made this "cure all ills" soup on New Years Day. {Just for the record, the husband was the one who needed some ills cured after celebrating NYE into the wee hours of the morning.} 😉 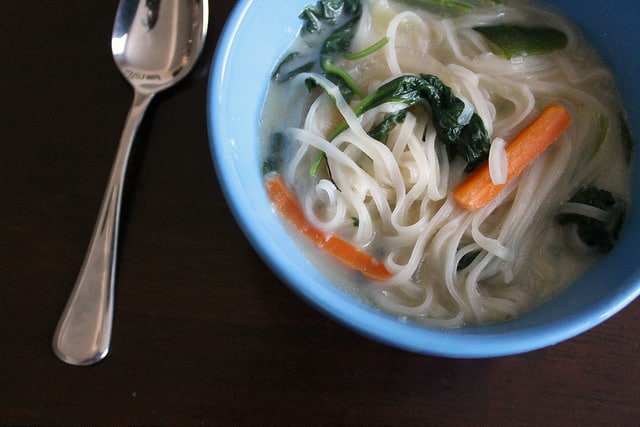 I didn't feel like doing any labor intensive cooking after our exhausting morning of laying around on the beach {it's a hard life,  I know.}, and we were both in the mood for something soothing and warm. {Even though it was 75 degrees out. It's winter in our heads. Whatev.}

Like chicken noodle soup, this Thai Inspired Noodle Soup is a bowl of comfort with an Asian twist. The ginger and sesame oil come through to give it an exotic flavor, and the light coconut milk gives it a silky richness without being unhealthy. We made ours with just veggies, but shrimp would make a great addition if you're looking for some protein. 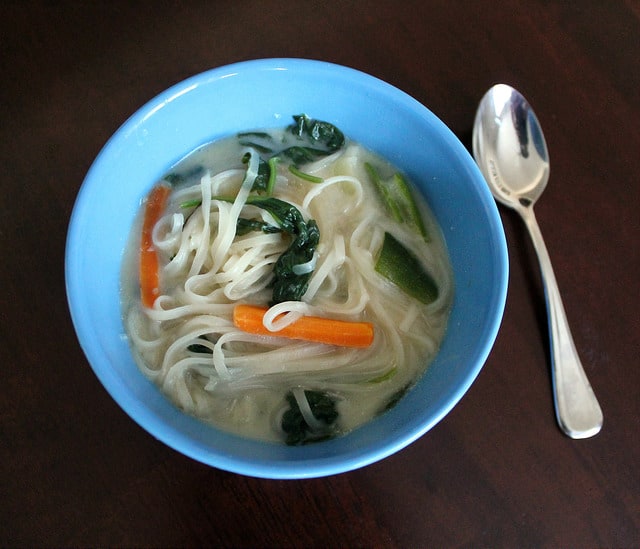 Now that the New Year has officially begun... it's time to detox. Why not do it deliciously?

1. In a medium pot over medium-high heat, add olive oil. Add onion slices and carrots, sprinkle with a pinch of salt, and saute until starting to become tender, about 5-7 minutes.

3. Add teaspoon of sesame oil, and stir. Pour in coconut milk, scraping the bottom of the pan to pull up any brown bits. Stir in chicken or vegetable broth. Cover and bring to a boil.

4. Add spinach and cook until it begins to wilt down. Add brown rice noodles to boiling liquid and stir. Reduce heat to medium and simmer until noodles are firm but tender, about 5-7 minutes.

5. Ladle into bowls and garnish with chopped fresh cilantro, if desired. Serve hot.