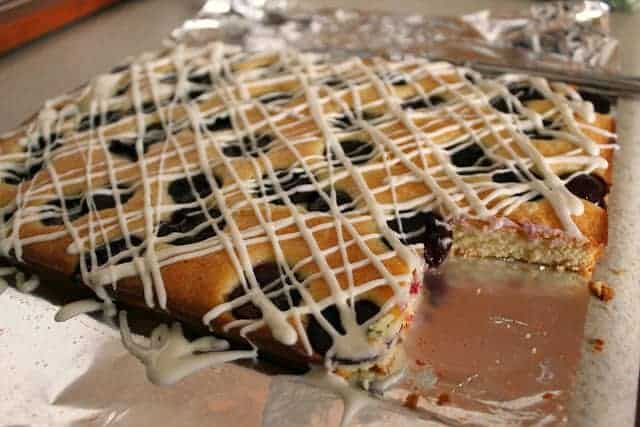 We had an interesting weekend. In fact, if it weren't for the picture proof, I would probably deny that the weekend existed because it went by so quickly. {Or it could be the brain cells that were killed by the second hand smoke of the hippies sitting around us at the Dave Matthews concert we attended on Saturday? Gave me a new perspective on the word potpourri.}

Despite the jam packed schedule, I still mananged to do some cooking on Saturday to bring along to the tailgate we were having before the concert. I brought Mustard Marinated Pork Tenderloin, Honey-Coriander Oven Baked Chicken Wings, and made a big Dutch oven full of Bourbon Baked Beans that never actually made it out the door with us because they weren't done cooking by the time we had to leave.

My brother-in-law, who bought us the Dave tickets as an anniversary gift and stayed with us for the weekend, shook his head at me when I decided to whip up a quick dessert to bring along to the tailgate. "Who brings dessert to a tailgate??!"

This girl, that's who.

Most boys don't have that nagging desire for a little something sweet at the end of a meal. But that sure doesn't stop them from digging in when it's put in front of them.

Being short on time, I needed a recipe that was quick, easy, and used ingredients I had on hand. I found all three of those requirements in these White Chocolate & Fresh Cherry Blondies. 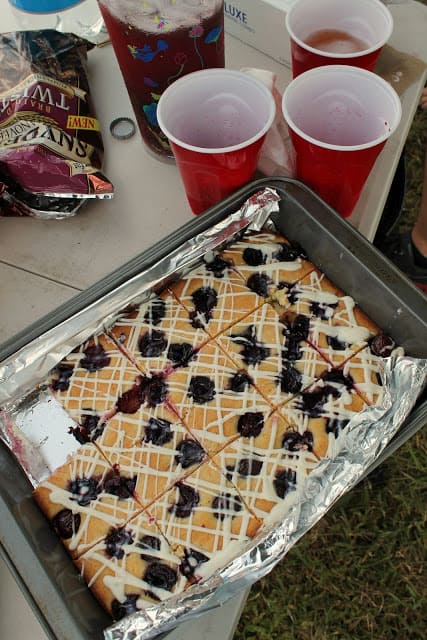 What I loved most about them was the fact that they're basically a one pot wonder. {Which obviously seems to be the theme of today's post. Love when it all ties in unexpectedly. Haha!} No muss, no fuss. {Except for all the cherry-pitting. But if you have a kitchen helper or have pitted cherries around, they do come together pretty fast.} They make a pretty yummy finished product, if I do say so myself.

If I made these again, I would try them out with a little less flour to try and create chewy texture I like in blondies. These were on the cakey side, which was still delicious, but made them seem more like a breakfast cake than a blondie. {Hmm... brunch item?!}

Now, to attempt getting back into the swing of things for the week. Let's see what these left over brain cells can do. 😉

In a medium pot over medium-low heat, melt butter, sugar, and white chocolate chips stirring often until smooth. {Be careful not to scorch white chocolate.}

Once melted, remove from heat and stir in flour and salt. Mix to combine.

Pour batter into lined pan and smooth out evenly. Top with cherries.

Bake for 18-20 minutes until slightly golden and a toothpick inserted in center comes out clean.