Apple Custard Bars! The autumnal answer to lemon bars, these Apple Custard bars consist of sweet and creamy apple cider-infused custard atop a brown sugar shortcrust, then smothered in a spiced apple topping. 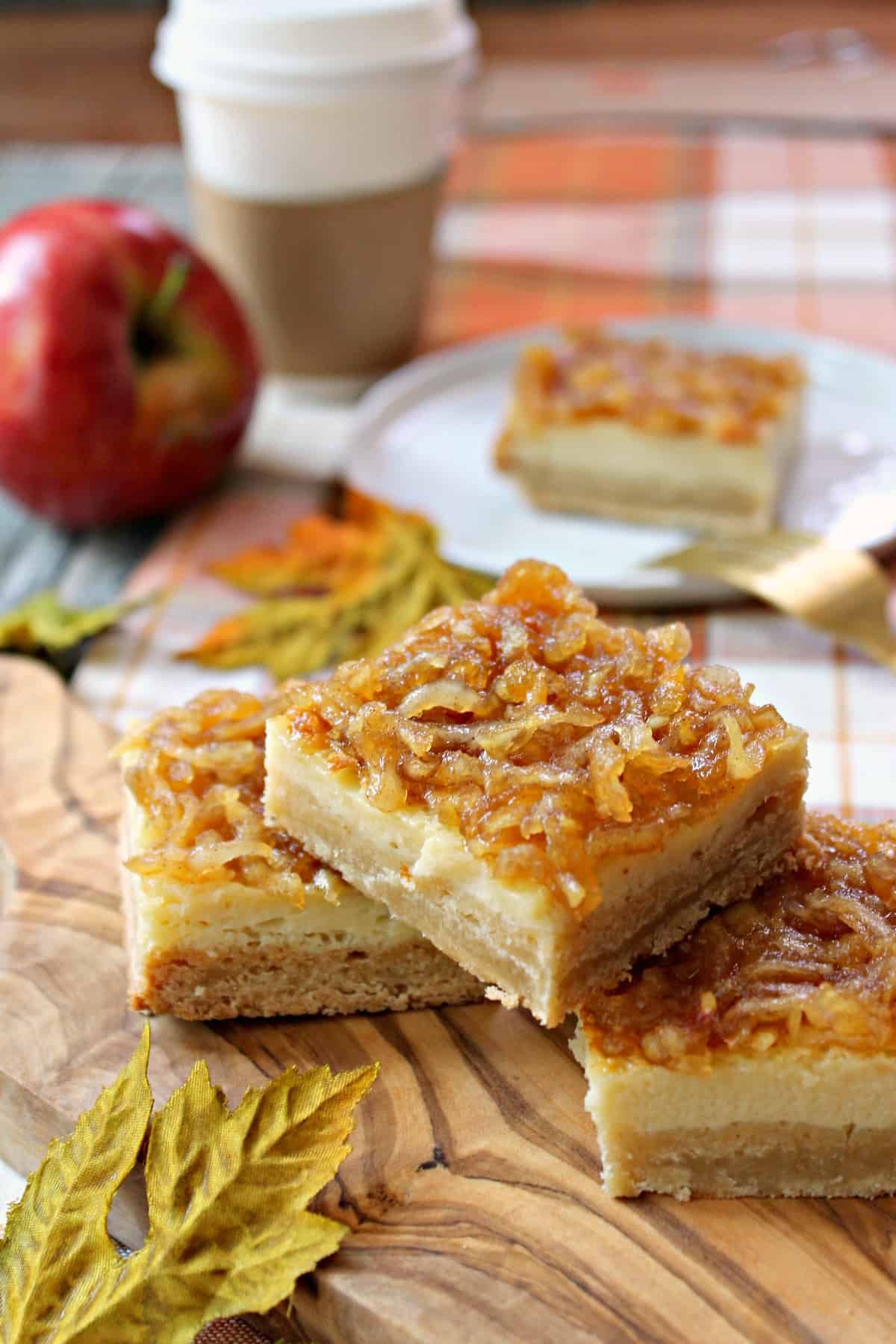 Quite often, I find myself thinking of popular or classic recipes and how I can adapt them for each season. That's exactly how these Apple Custard Bars came to be! A daydream about Lemon Bars {don't you have those??} gave way to thoughts of creamy bars with an autumn twist, and a few hours of kitchen experimentation later, I had these babies sitting in my kitchen begging for sweater weather.

Basically, they're lemon bars gone apple picking. A creamy custard base is infused with spiced apple cider for those warm fall flavors, and baked atop a simple brown sugar shortcrust. But the thing that really takes these bars over the top is the sweet and sticky apple topping made with fresh grated apples.

How to Make Shortcrust

When I was mulling over ideas of how to execute these Apple Custard Bars, I thought about maybe using a graham cracker crust, but ended up going with a shortcrust {barely adapted from here}  instead for the stability factor since the custard that goes on top is heavy and I didn't want the bars to crumble. 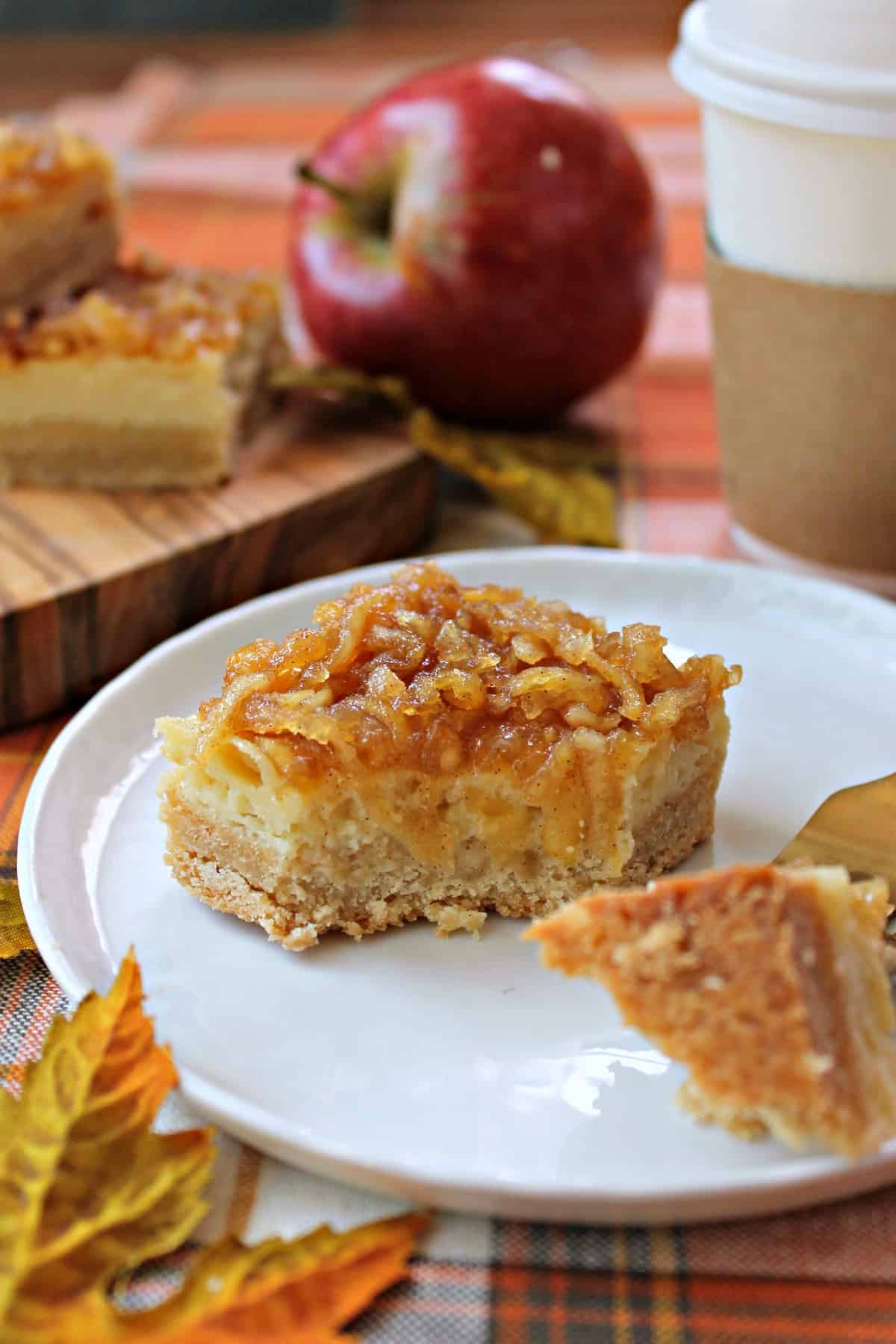 Shortcrust is actually fairly simple to make. It's the same type of pastry used in quiches, tarts and sometimes even pies. It's made by combining flour, softened butter and sugar, {either with a pastry cutter or in a stand mixer, as I did} and then pressing the dough down into the baking vessel of your choosing.

In this instance, I decided to use brown sugar instead of granulated sugar because I think it gives a bit more of that warm, caramelized flavor that's associated with fall, but you can use granulated sugar for shortcrust as well. For shortcrust that is going to contain a filling that needs to be baked, it's best to par-bake it until it's lightly golden before filling it.

The creamy middle of the bars is a simple custard-y mixture made of eggs, sugar and spiced apple cider for that apple flavor. A dash of flour allows the custard to thicken it up and have more structure while the baking soda helps it puff up a bit. If you like the custard layer a bit thicker, you can double the custard portion of the recipe, however, you'll have to account for the extra volume in the cook time.

I'm going to go ahead and come clean... I didn't plan for these bars to have a topping. The top didn't look pretty once it was all baked up, so I thought it might be a good idea to cover it up with an additional, equally delicious layer. 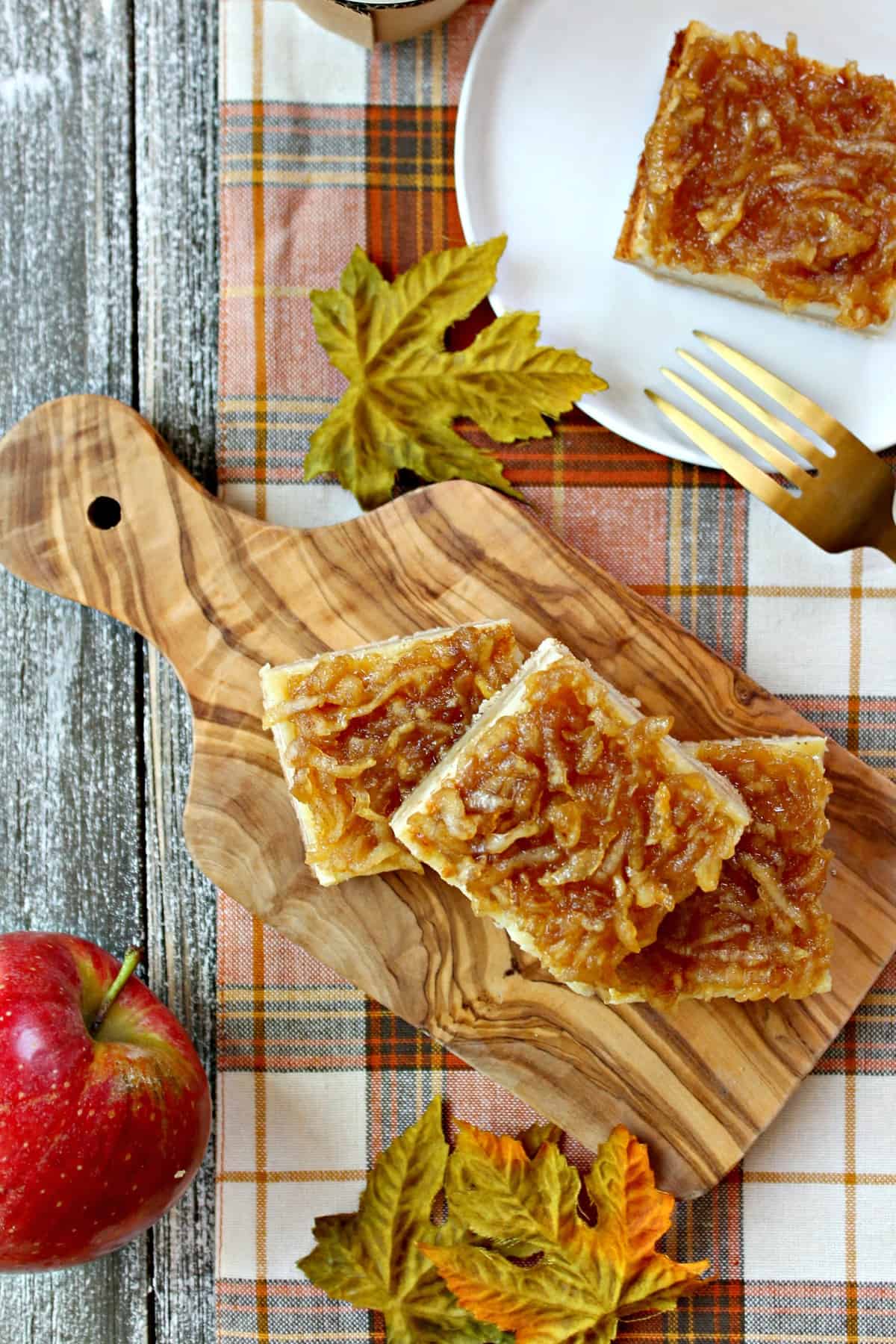 I threw together some butter, shredded apple, cinnamon, brown sugar and maple syrup in a saucepan and let it bubble for a few minutes to thicken up and allow the moisture to draw out of the apple. In the end? The mixture became a syrupy, caramelized treat that would be just as good on ice cream or pancakes as it is as a "toupee" on these bars. It may have not originally been intentional, but it sure was a good addition!

The key to getting beautiful slices out of anything with the texture of these bars is letting it cool completely and allowing it to chill before cutting. I know it's hard to wait, but that's the only way you'll get clean, satisfying slices! The edges, which become a perfectly mouthwatering golden brown during baking, should also be trimmed to expose the gorgeous layers on the side of each square. Just think of them as the cook's treat!

One the entire pan is cool and chilled, carefully pull the entire dessert out {I just used a spatula and carefully lifted it out} and place it on a cutting board. Use a large, sharp knife to to cut the entire square in thirds, then rotate it a quarter turn and cut it in thirds again to get 9 perfect slices out of the 8x8 inch square. Trim the edges if desired, and top each piece with about a teaspoon of the sauteed apple mixture.

It may sound like a lot of steps, but these Apple Custard Bars are really pretty easy to make! And they're a great way to use up some of the apples from your fall haul, if you're lucky enough to have some!

What other classic recipes can you think of that deserve a fall twist?? Let me know in the comments and maybe they'll be my next kitchen experiment! 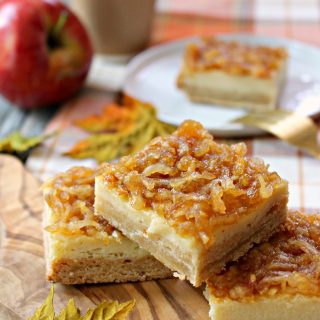 For the Custard Filling: