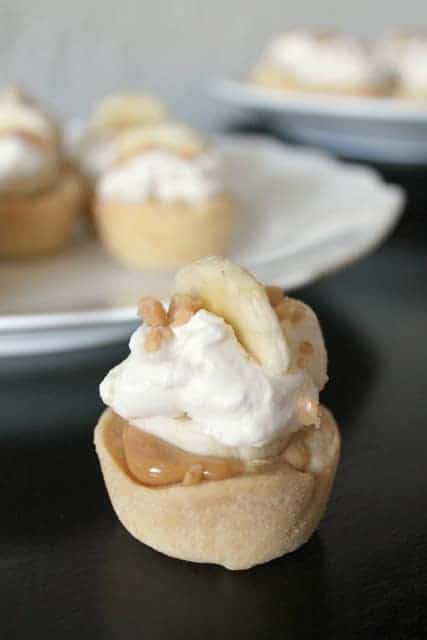 Yes, this is the second dessert recipe I'm posting this week. There may be a third. I've been giving you a lot of dinner/healthy/savory recipes lately, so I feel like I'm entitled to get back to the "make-my-teeth-hurt" sweets that make my heart sing. Get over it. 😛

Now that I'm done justifying all the sugar that's about to happen, let's talk Olympics!

Who is super excited about watching semi-superhuman athletes compete in amazing feats of strength and endurance while you sit on your couch and stuff your face?!! ME, TOO!

The Olympics always bring a palpable vibe of both patriotism and brotherhood of man {um, hello, can that phrase get anymore sexist? Siblinghood of people!} when it makes its rounds every 4 years. I have to admit that although I do get sucked into the magic of the games, what I most look forward to watching is the bulging biceps of hot male gymnasts opening ceremonies.

There is something very cool about watching individuals from 205 different countries come together, set aside their differences - their languages, beliefs, politics, and the like -  and take part in a tradition that has been taking place for hundreds of years. {Fun fact: We have a friend who will be participating in the Olympic games! Also, my brother-in-law will be there to watch some of the events live & in person! So cool!}

This year, of course, the games will be hosted in jolly old England. A place that has it's very own long standing history of tradition and culture. Surely, you are familiar with some very British things: Big Ben, Will & Kate, fish & chips, and high tea... but have you ever heard of Banoffee Pie? 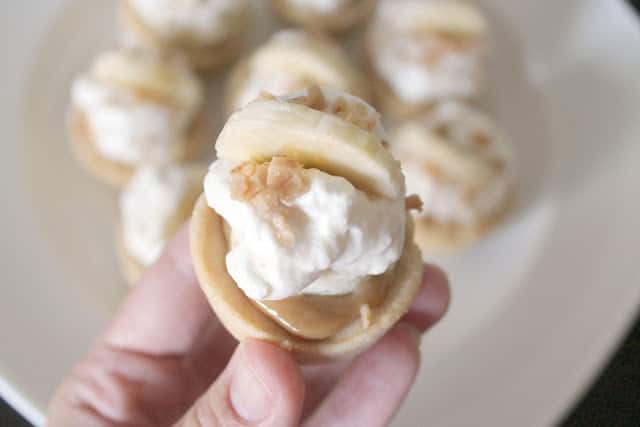 Banoffee Pie is said to have originated at The Hungry Monk in East Sussex, England around 1972. The rich dessert, consisting of bananas, "toffee" {a.k.a. dulce de leche}, and whipped cream atop a crisp pie crust {sometimes made of "biscuits" such as McVities} has created quite a name for itself, and one little bite will explain why. 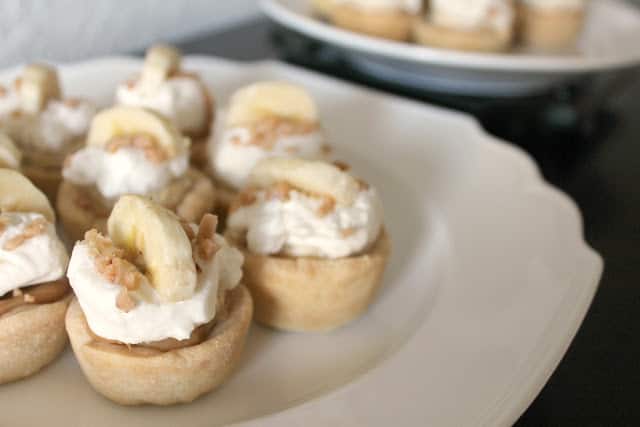 I made my own baby Banoffees as a nod to this year's Olympic host, and boy, are they delicious. The ooey, gooey toffee with the banana... the {brown sugar infused} whipped cream... the little pie crusts that make your whole house smell like butter when you bake them. They're a winner. Gold medal, I'd say. 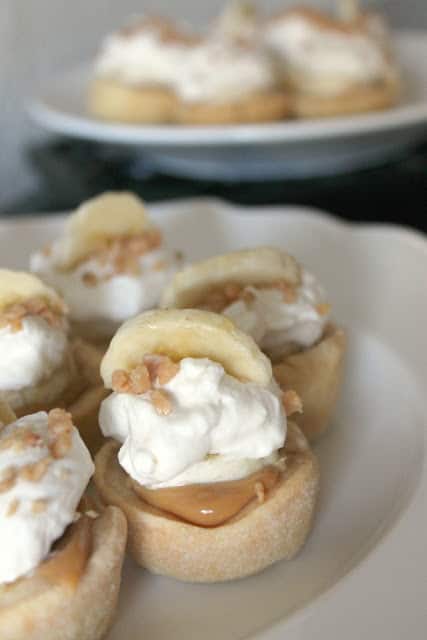 Even the hubby, who you know isn't very into sweets, said they were amazing {At least that's what I think he meant by, "Ohmnomgddnomnomnom" between bites.} These would make the perfect little treat to serve as you settle in to watch the opening ceremonies, or for any event for that matter. 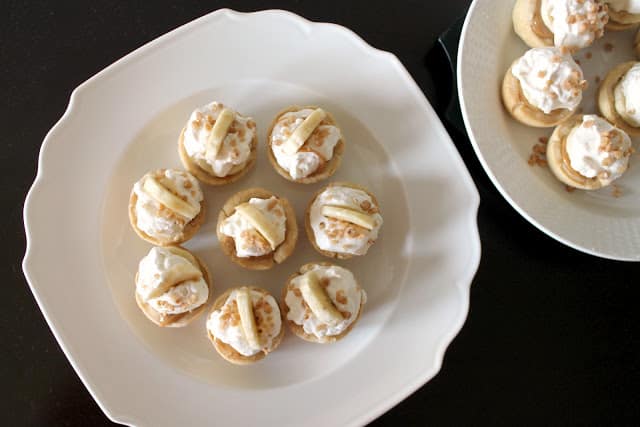 But unlike the Olympic tradition that has spanned the centuries... these little babies won't be around very long!

Pour 1 can of sweetened condensed milk into an 8x8 inch glass baking dish. Place the baking dish inside a larger baking pan with high sides. Carefully fill with hot water, reaching about half way up the sides of the glass dish. Tightly cover with foil.

Bake for about 2 hours, checking about half way through cooking time to make sure there is still water in the pan. {If not or running low, add more.} Whisk to smooth.

Remove pan from oven and whisk until completely smooth. {Should be thick and caramel colored.}

Place about 1 cup of cold heavy whipping cream into the bowl of a stand mixer. Add 2 tablespoons of brown sugar. Lightly mix until sugar begins to dissolve. Using the whisk attachment, whip until stiff peaks can be formed.

Set aside in refrigerator.

Roll out pie dough to about ⅛ inch thick. With a round cookie cutter {or an upside down drinking glass dipped in flour}, cut out 16 circles. {You may need to gather scraps and re-roll.}

Bake for 22-25 minutes or until just starting to turn golden brown.

Drop a heaping teaspoon full of toffee into each baked mini-pie crust. Place 1 piece of banana on top of each. Dollop each mini-pie with whipped cream.

{Optional} Garnish with toffee bits and half a banana slice. Keep refrigerated until serving.