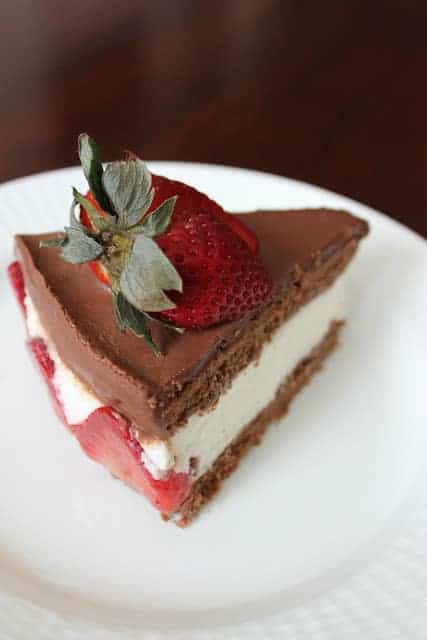 I have to confess: I buckled a little under the pressure of coming up with an Easter recipe post.

{It seems to happen to me every time a holiday comes around.}

I wanted to make something cutesy -- you know, bunnies and eggs and chicks and the like -- but sadly, all my plans of fluffy grandeur crumbled to pieces. {Literally. I was making Easter Oreo pops, but the darn things kept falling apart!}

Once those fell through, I figured I could share what I'd be making for the weekend... but my family and I are celebrating Easter Sunday with brunch at a restaurant, so the only cooking I will be responsible for is a cake for Saturday's celebration with my in laws. Since that cake won't be baked until tomorrow, that leaves me with... well... nothing to post about until after the fact. No good.

I have gone through this enough times now that I've learned not to fight it when things start to go awry in the kitchen. And since my pulse began racing the minute I woke up this morning as I started thinking about my list of things to do before the start of this very busy weekend, the solution became glaringly obvious: Share something not intended for Easter that could be made for Easter.

No one will know the difference. Except now I've just divulged my secret and the truth is out.

Regardless, I think you might forgive the manipulation after I give you the recipe for this cake because, despite the lack of bunnies and all, it is beautiful, impressive, and so very good. 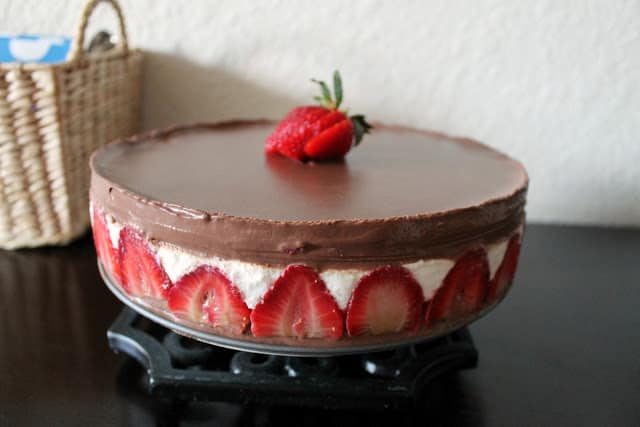 When I found this recipe on the Lindt website a few months back, it screamed "special occasion cake" to me. The gorgeous display of strawberries lining the perimeter of the cake; the pillowy center of coconut creme; the smooth, silky layer of ganache glistening on the top... there's no doubt about it, this cake is a showstopper.

I made this Strawberry Coconut Torte for my sister's birthday in March, and everyone loved it. {In fact, my sweet grandma - Queen of Moderation - had two slices! Here's photo evidence of her admiration of the cake that I posted on TKP's Facebook page.} It is surprisingly light and just the right amount of sweet. {And there's fruit involved. Bonus points.} 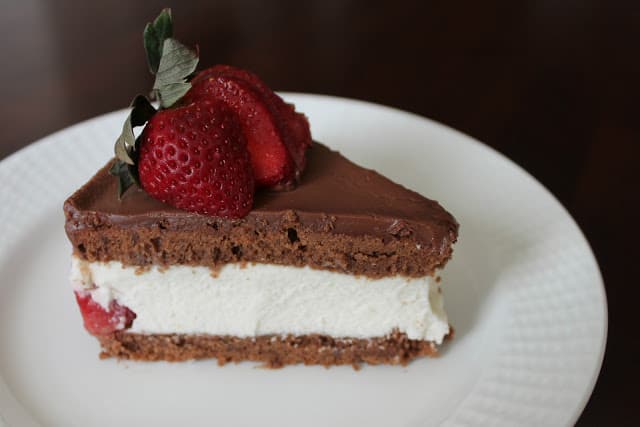 So, while this wasn't originally intended for my Easter post, I think it will make the perfect dessert for your celebration this weekend. And if you insist upon dressing it up to make it a little more "Easter", then heck, I can't see why a Peep wouldn't be perfectly content sitting atop this masterpiece. 🙂

Preheat the oven to 350°F. Spray an 8" or 9" springform pan with non-stick cooking spray.

In a mixer, combine egg yolks and powdered sugar and whip until creamy. Meanwhile, sift the flour and cocoa together in a small bowl. Slowly add flour mixture to the yolk mixture until just combined.
Fold in the melted butter and melted chocolate.

In a clean bowl, whip the egg whites until stiff. Carefully fold ⅓ of the whipped egg whites into the batter.Fold in the remaining egg whites. {This part might be tricky because the batter is super thick & sticky. Just take your time, it will incorporate eventually.}

Pour the batter into the prepared springform pan and bake approximately 25 minutes {keep an eye out, once the edges start to pull away a little and the cake springs back when touched lightly, it's ready}. Once baked, remove from springform pan and cool completely.

To make simple syrup: In a saucepan, combine the ½ cup sugar with 6 tablespoons of water and bring to a boil. Remove from heat. Pour half of syrup into a small bowl and set aside for later use. Stir vanilla & almond extracts into remaining half of syrup.

Cut the cooled cake in half horizontally {like a layer cake}. Spoon or brush the syrup equally onto both cut halves of the cake. Place half of the cake into the clean springform pan.

Cut half the container of strawberries in half and place along the edge of the spring form pan with the cut side facing out, touching the walls of the pan. {You will want to use like sized strawberries for this part, if possible, for a uniform look}. Slice the rest of the strawberries and arrange along cake bottom. {If desired, set aside a few strawberries to decorate the top of the cake.}

For the coconut creme: Heat 4 tablespoons of the coconut milk in a heatproof bowl until warm {about 30-45 seconds in microwave}. Sprinkle the granulated gelatin over the coconut milk and do not stir. After 5 minutes, whisk until completely dissolved.

Warm the remaining coconut milk, and stir in the gelatin. Cool.

In the bowl of a stand mixer {or with a hand held mixer}, whip heavy cream until until stiff, then slowly add the sugar. Fold whipped cream into cooled coconut milk.

Carefully pour the coconut créme over the strawberries in the springform pan, making sure to cover strawberry tops and smooth out evenly. Place the second half of the cake on top and very lightly press down.

Place in the refrigerator for minimum of 1 hour.

For Ganache: Bring the heavy cream to a slight simmer, remove from heat and stir in the butter and chocolate and let the mixture cool down. Stir remaining simple syrup into the chocolate. Stir in tablespoon of sour cream or Greek yogurt if desired. Pour evenly over the torte.

Return to the refrigerator and cool for minimum 2 hours.

To Serve: Carefully run a knife along the edge of the pan. {Take care not to displace strawberries.} Release the springform and carefully remove.Transfer the torte to a serving plate or cake stand.

Garnish with strawberries or Easter accouterments!