Yesterday I posted about the Italian Love Knot Cookies that I made as a part of my good friend's bridal shower gift. Alongside these yummy treats , I included a little nod to her fiance's Polish heritage as well: Faworki!

Faworki - also known as Angel Wings, Chrusciki, Chrust, or Polish Crullers - are basically strips of dough that are twisted into ribbons {the best way I can describe it is a "Topsy Tail". Ha!!}, deep fried, and sprinkled with powdered sugar. Like Polish funnel cake! 🙂 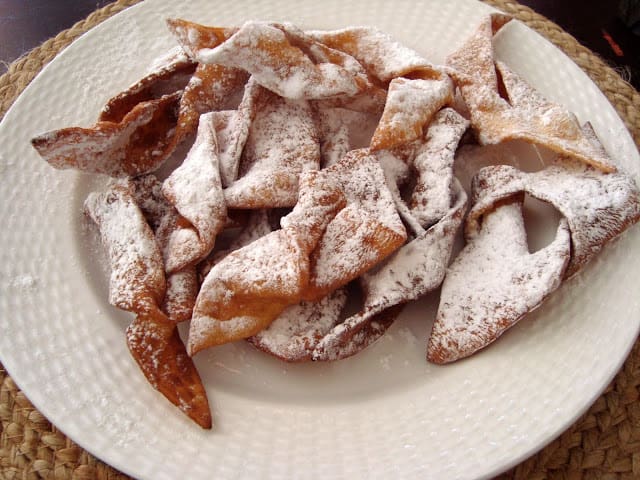 Similar to the Love Knot cookies, faworki take a little bit of time and a lotta bit of patience, especially if you're not the type to spend time in the kitchen rolling out dough and such. {Truthfully, I'm a fan of non-fussy drop cookies myself.} They're not called Faworki for nothin'. 😉 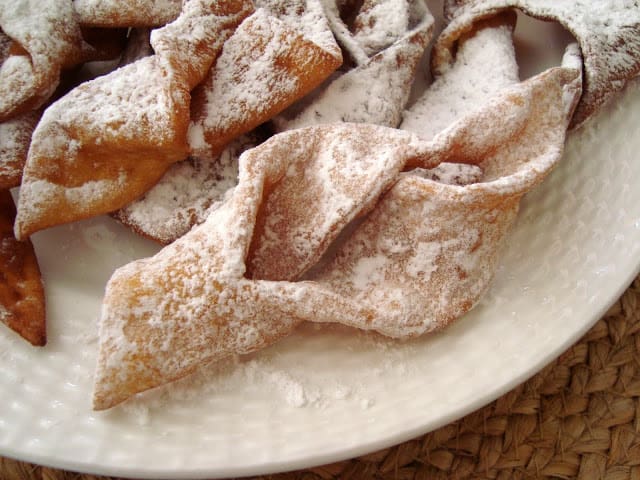 Now, I've gotta let you in on a little secret. Ms. Paula Deen, if you are reading this {hey, a girl can dream}, please avert your eyes for just a moment while I divulge this little nugget of information. 😉 Ok, here it goes...

Before making these Faworki, I had never really deep fried anything. Ever.

I don't know about you, but I avoid being exposed to high volumes of scalding hot oil at all costs. It just sounds like a kitchen nightmare and trip to the ER in the making. Aside from the fear of burning down my apartment and 3rd degree burns accidents occurring, vats of oil don't usually make it into my favorite ways to prepare food. {Unless we're talking the occasional french fry, which I have a VERY hard time turning down. Mmm...}

So, anyway, I was a little apprehensive about approaching this fried confection because I did, after all, want to attend the bridal shower without needing to stop in at the nearest hospital for a skin graft or two beforehand. I only had a small bottle of vegetable oil, so in the end I didn't actually "deep" fry because there were only a few inches of oil in the pot. The faworki turned out just fine anyway, even though they went for more of a shallow wade than a serious plunge. 😉

Some helpful suggestions for the frying impaired:

1. Be careful. It is still hot oil no matter how you look at it. Safety first! 🙂

2. Fry in small batches. Do not get in over your head and try to send them all in for a swim at the same time. Haste makes waste!

3.. Do not walk away from them even for a second. They fry up FAST. Fast enough to get too brown on you before you can realize it's too late.

4. Work as quickly as possible. The longer the oil was over the heat, the more time it had to brown any little bits that stayed behind from the previous cookies and make the oil "dirty". Nobody likes cookies that taste like burnt oil.

5. Try to make these the same day you plan on serving them. As with anything fried, they are best served fresh and don't do well being stored.

6. If you're more of a visual person, go to About.com's fabulous photo tutorial on making faworki.

Those are all the words of wisdom I can think of, but I trust that you'll be just fine if you decide to venture into the world of faworki. As a side note, it was mentioned to me that these were received very happily by the groom-to-be and that they were gone almost as quickly as they arrived. What a compliment! 🙂 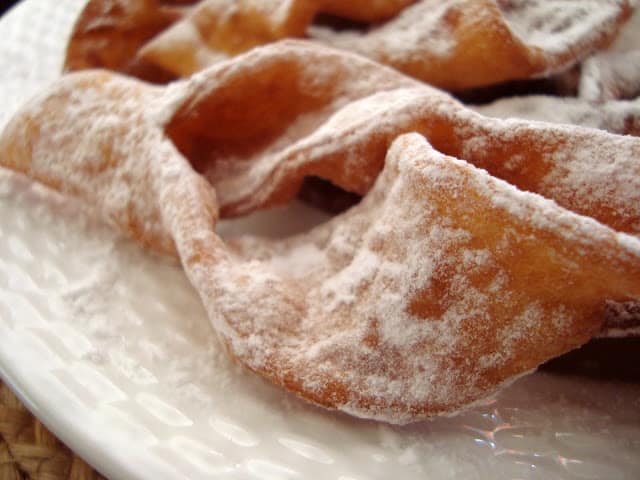 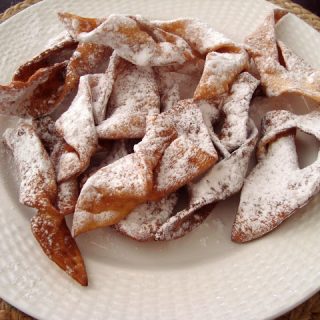