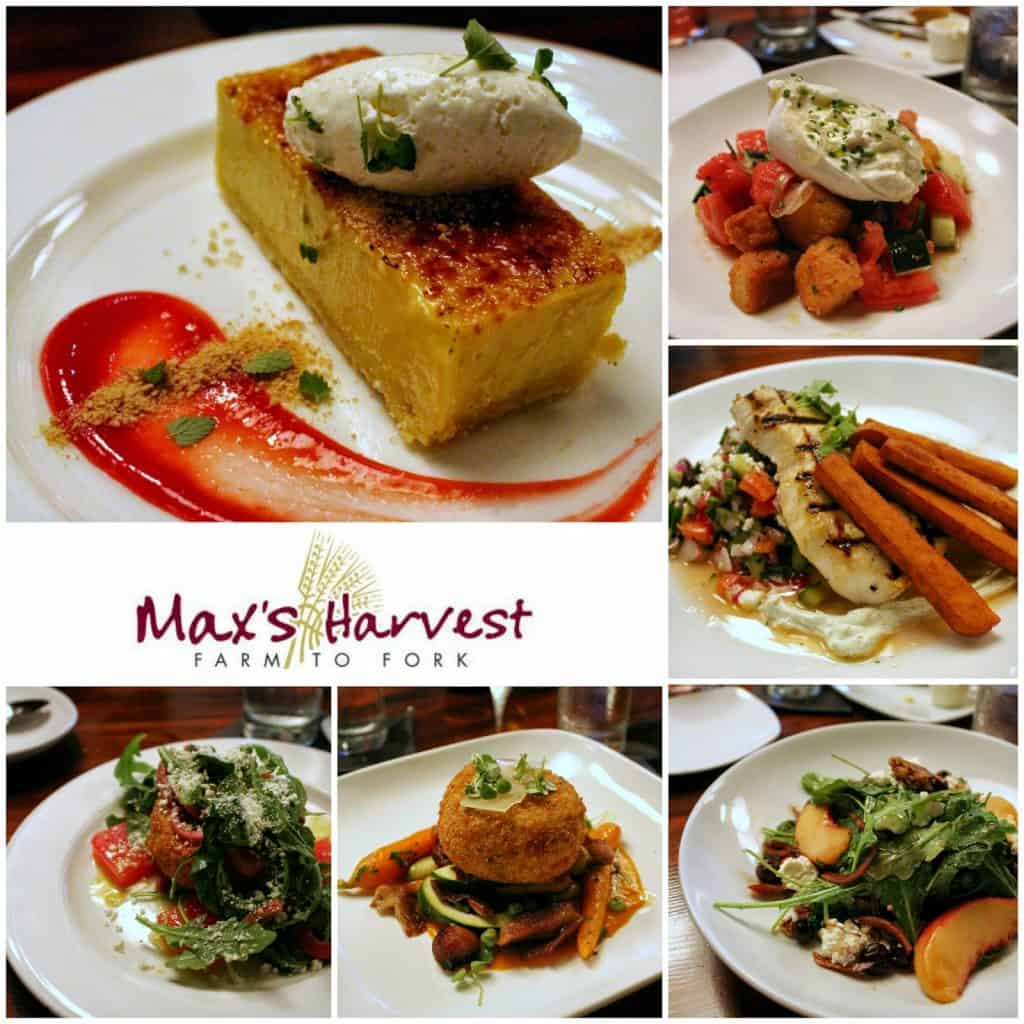 You know a meal is thatgood when you're a little sad you're taking your last bite. Even when you're stuffed to the gills, as I was when I dined at Max's Harvest in Delray Beach.

I was delighted to receive an invitation to come check out the restaurant, especially because I'd already heard such good things. So, I came hungry and let their dishes lead the way to an evening of "Farm to Fork" satisfaction. 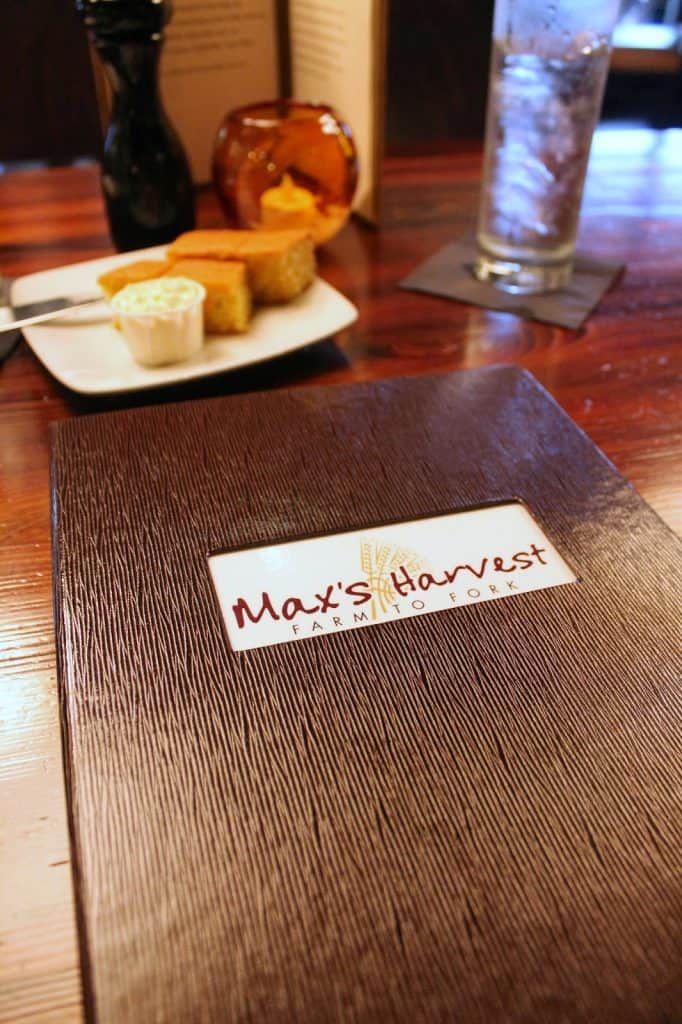 Max's Harvest has been around for 3 years and has become a popular spot for locals, which was evident from the bustling bar scene when we were seated at 7pm on a Friday evening. I loved the feel of the restaurant - modern yet rustic, with black and white images on the walls depicting its emphasis on local farm fare.

Our server was beyond knowledgeable about each menu item, down to knowing where each of the farm-fresh ingredients came from -- each locally sourced from nearby farms and throughout the state. With a focus on sustainable, seasonal and simply prepared meals, it's no wonder the ingredients seem to shine in a special way.

The first bite on this flavor journey started with the complimentary zucchini bread they placed on the table. I probably could have eaten an entire basket. I wanted to wander into the kitchen and see if I could catch a peek at how they made it, but I figured I'd sit tight as more food was sure to be on its way. 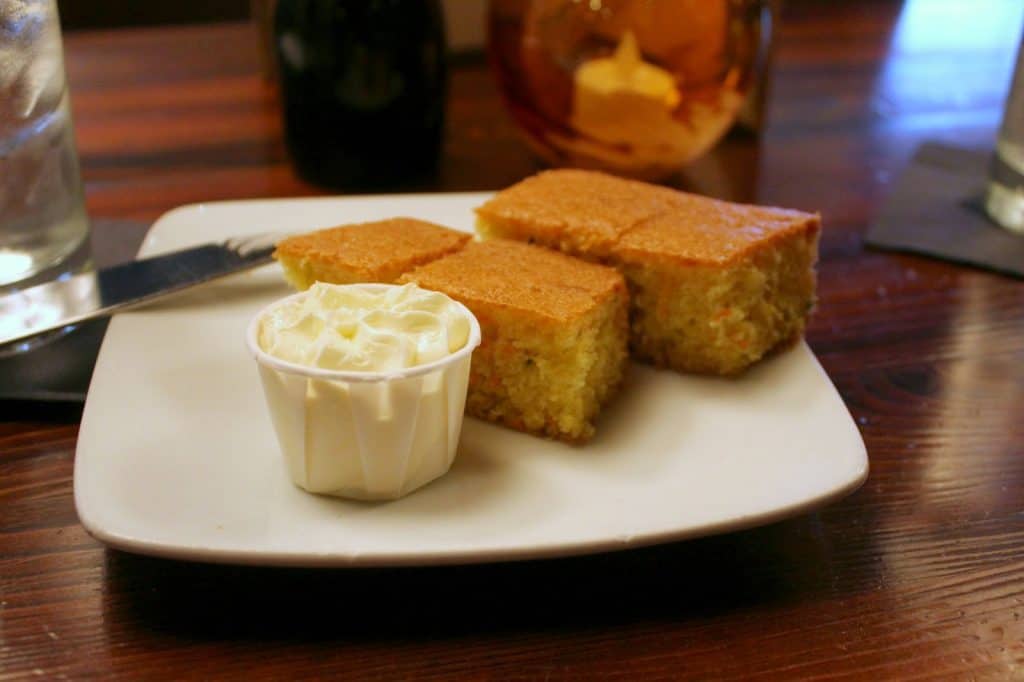 And sure enough, our server appeared with a dish sent out by the chef: A crispy, Breaded Pork Torchon over compressed watermelon and topped with fresh greens. As you know, I'm not usually a big meat eater, but I did like the combo of the light ingredients and the hearty pork. Steve polished off his half and most of mine, so I'm pretty sure he liked it, too! 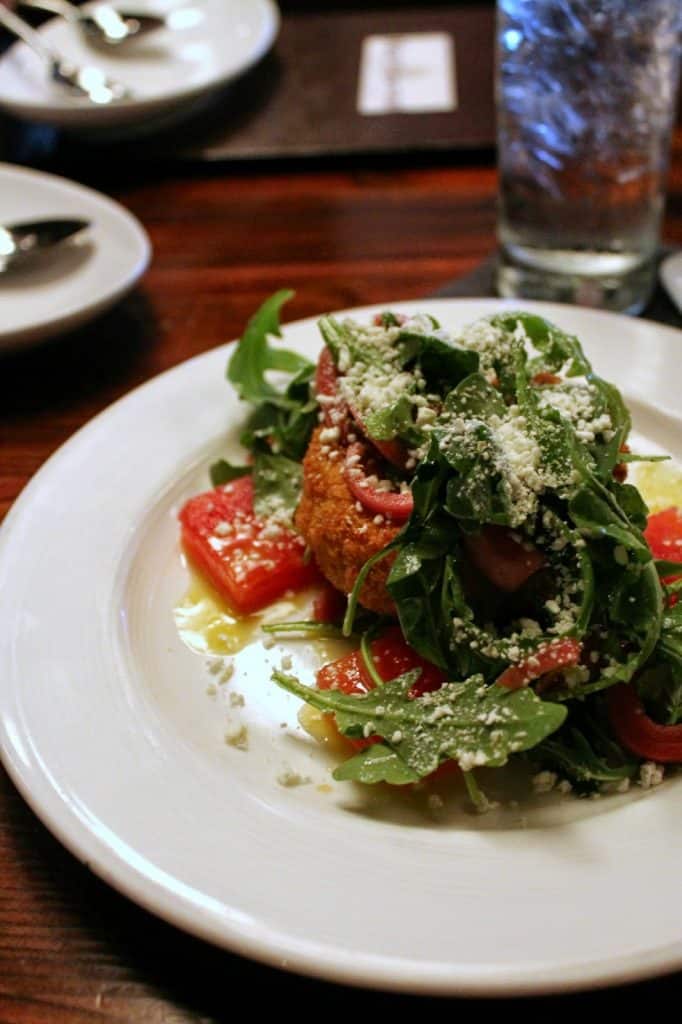 The bread had gotten us a little excited and we ordered two appetizers right out of the gate: the Peach & Blueberry Salad with Baby Kale & Arugula, Caramelized Peaches, Blueberries, Pickled Shallots, Ricotta Cheese, Walnut Vinaigrette {holy mouthful!} and Vito's Burrata with Croutons, Red Wine Vinaigrette, Florida Watermelon, Pickled Shallot, Heirloom Tomato and Cucumber. After my first few forkfuls, I knew these were things I could easily order as an entree {mostly because I was tempted to steal Steve's dish and not share} -- they were both so, so good. 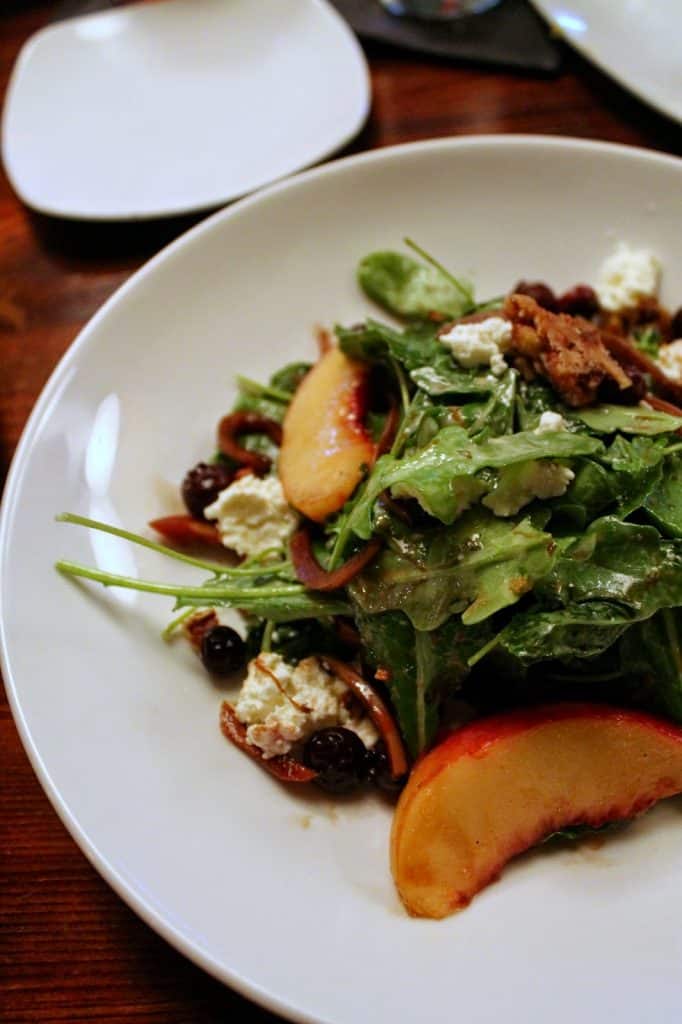 The salad was such a perfect combination of flavors: sweet, caramelized peaches and blueberries, savory and creamy ricotta, tart vinaigrette and pickled shallots, fresh and crisp kale and arugula. When the chef popped out of the kitchen to see how we were liking things I'm pretty sure I sputtered nonsensically with stars in my eyes over the salad alone. 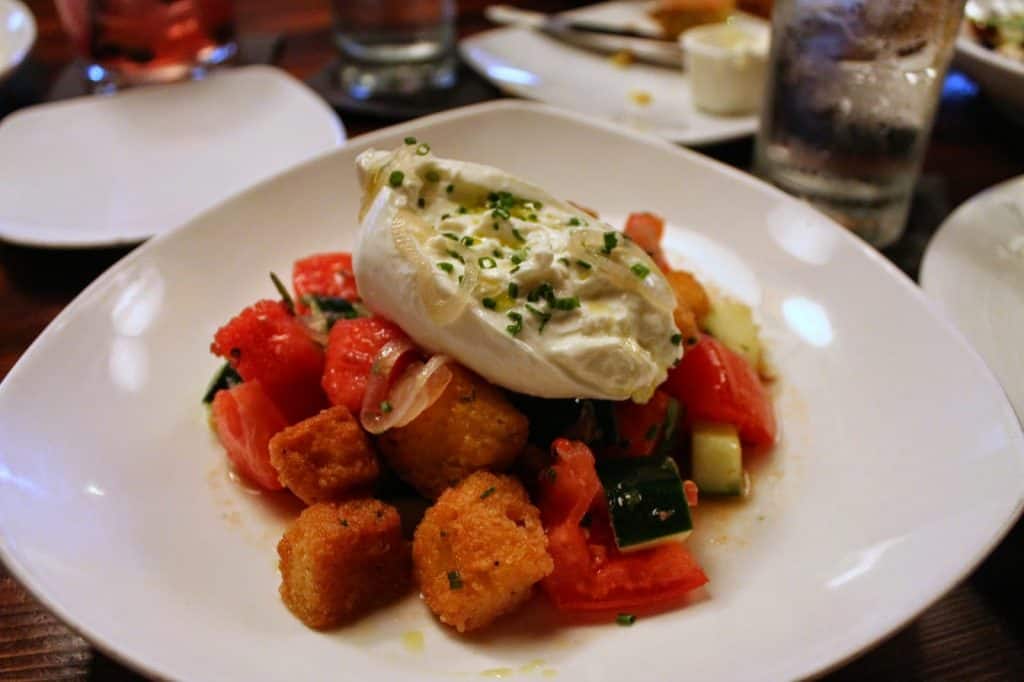 The burrata was also a perfect pairing of flavorful elements. Burrata, as it is, is probably among the things I would choose to be part of my last meal on earth. It is so decadent and delicious, and combined with sweet watermelon, fresh tomatoes and cucumbers, it seemed creamier and more delightful. My favorite part of this dish were the croutons that soaked up all the vinaigrette and juices from everything else on the plate. Oh, my.

Next up: Entrees. Our server saw me pat my {round, already stuffed} belly and reprimanded me for not pacing myself, but I ensured him that I'd find the room for at least a few bites. I ordered the Crispy Parmesan Risotto Cake with Mushroom, Favas, Baby Carrot, Zucchini, Pearl Onion, and Tomato-Pepper Coulis and Steve chose Grilled Local Swordfish with Greek Farmer’s Salad, Feta, Chick Pea Fries, and Lemon-Yogurt Sauce. 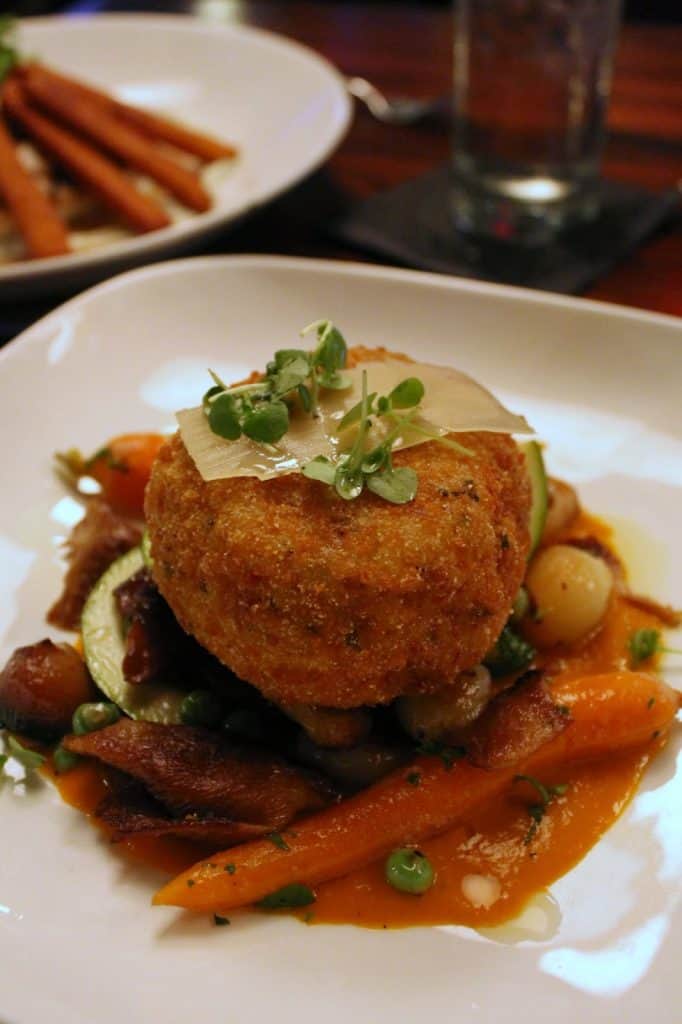 They were both so pretty it seemed a shame to deconstruct them, but we dug in anyway to get a taste. I really enjoyed the Risotto Cake with its crisp {but not overfried} exterior and contrasting creamy interior. The veggies gave a nice sweetness to the dish, specifically the little caramelized pearl onions, and though I definitely wasn't able to finish the whole thing right then and there, I still managed to have a few more bites. 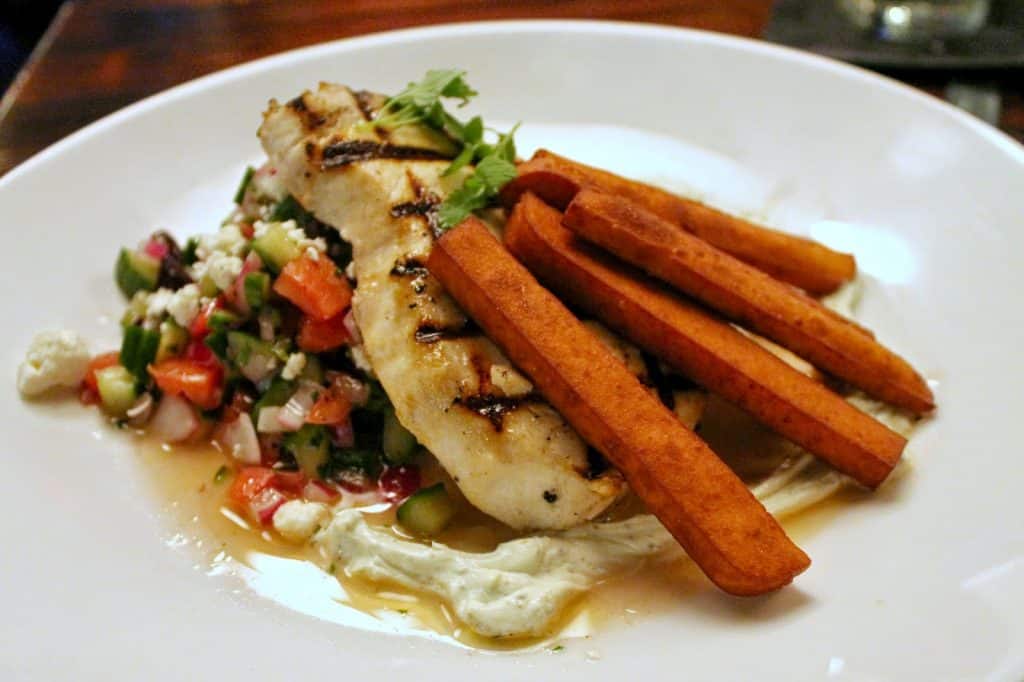 I didn't even get to taste the swordfish, but Steve assured me that it was good, as was evident by the fact that he was very excited to box up what was left to polish off as leftovers.

Ok, so I know I said we were both beyond full... but our server tempted us with their desserts du jour and we {well, I} couldn't refuse. They had so many amazing-sounding offerings -- from Blueberry Bread Pudding to Made-to-order Cinnamon Sugar Donuts {for real} -- but we went with a twist on a Florida classic: Key Lime Brulee.

It was a good choice. Tangy, rich key lime filling atop a buttery crust with a crackly layer of bruleed sugar and a beautiful little cloud of whipped cream perched on top. Mmm. 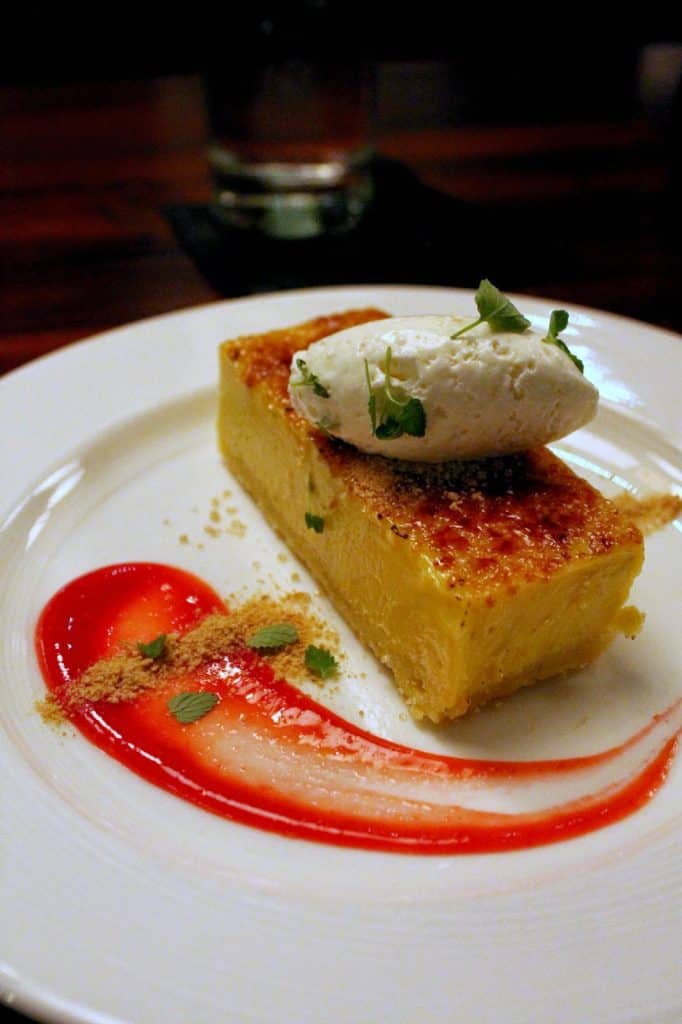 Overall, I couldn't have asked for tastier dishes or better service. If forced to find a downside, the only fault I could find would be noise level of the packed house keeping potential patrons from having a romantic or intimate dining experience. But, to be honest, you'll probably be doing more savoring than chatting, so this may not be a problem after all -- come with a lively crowd and a hungry belly!

A big thank you to Max's Harvest for a fantastic evening of fabulous dining!

Disclosure:  I was invited for a complimentary dinner for two at Max's Harvest to check out their menu. As always, all opinions seen here are my own! 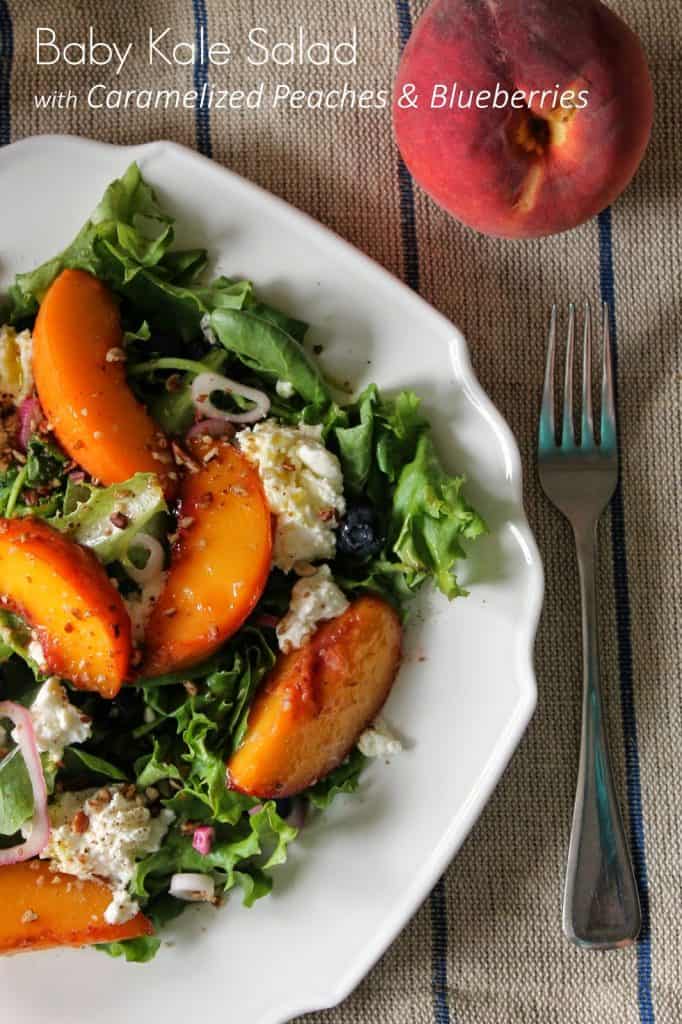 Of course, I had to recreate that crazy-good baby kale salad to share with you here since you couldn't join me at Max's Harvest. {And, let's be honest, I might not have hogged all of it at dinner.} 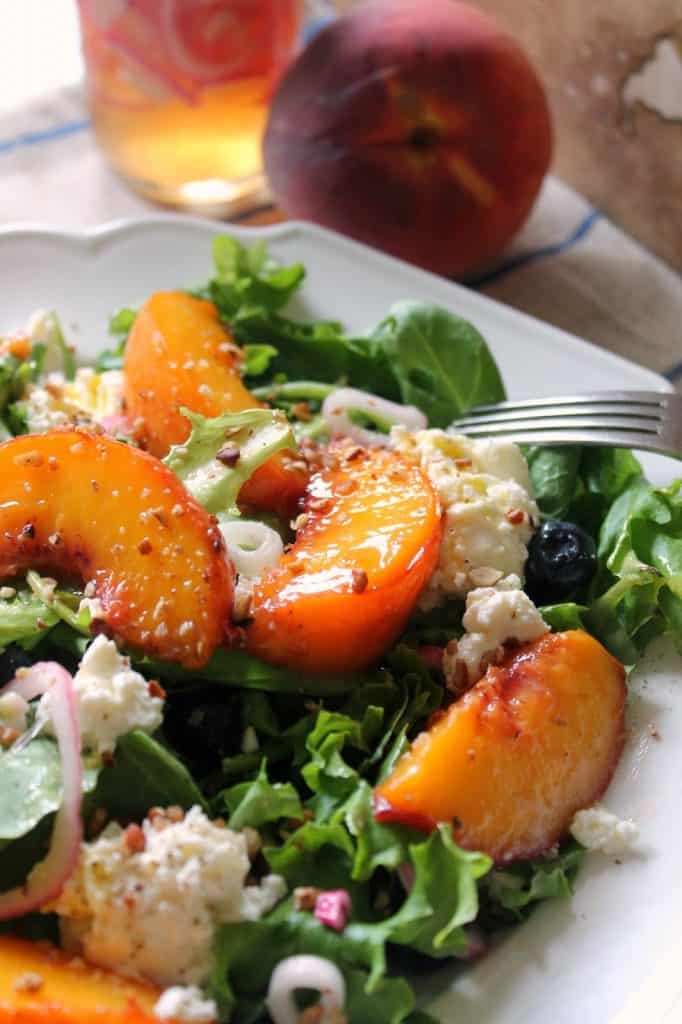 This salad has a few elements that take some prep, so it isn't exactly a "throw together at the last minute" kind of dish. However, after a bite I think you'll agree that it's worth the trouble to get the flavor combos found here. 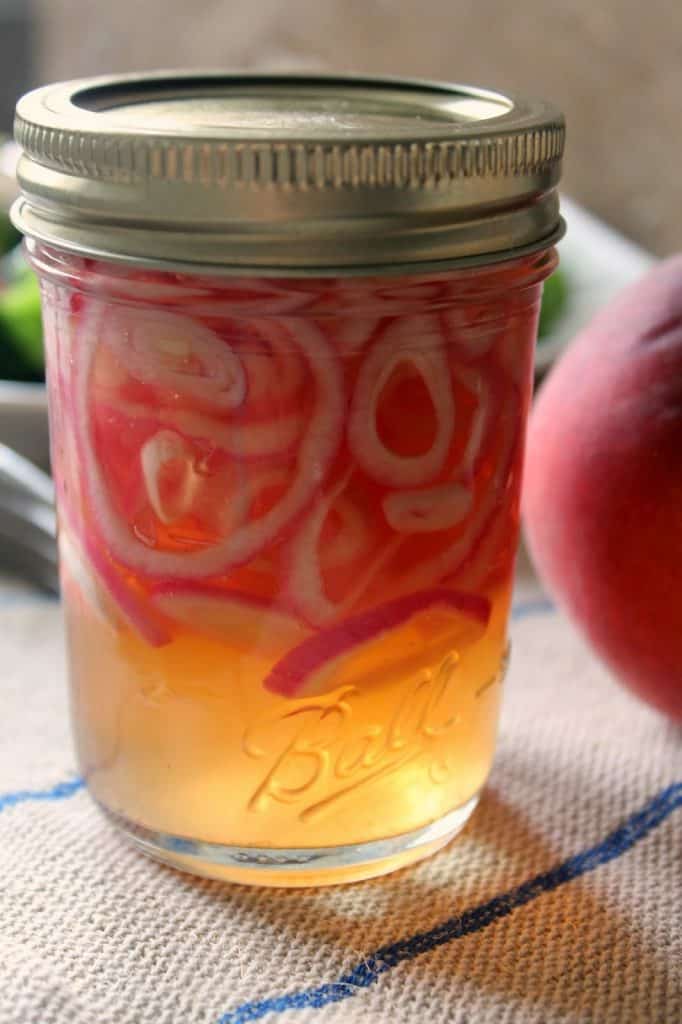 Pickled Shallots. Tangy vinaigrette. Caramelized peaches that you could easily eat as dessert. It's sort of magical. 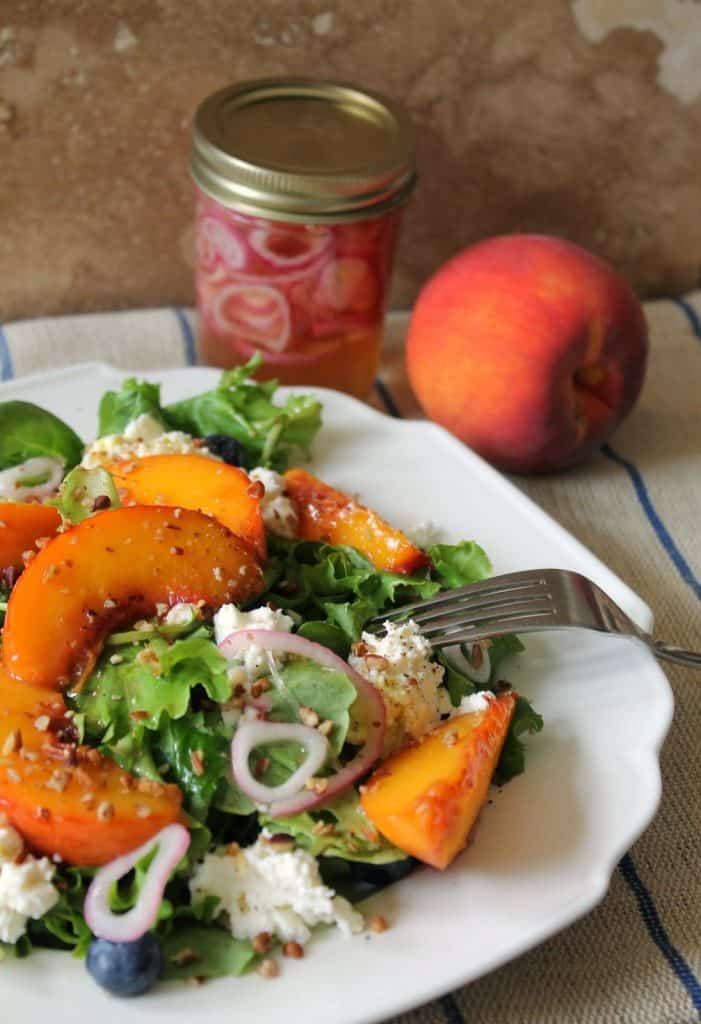 Baby Kale Salad with Caramelized Peaches & Blueberries
Inspired by Max's Harvest in Delray Beach, Florida
*Measurements will vary according to taste. Make it your own! 🙂

1. Divide ingredients between two plates. Drizzle with vinaigrette to taste.

1. In a small bowl, whisk together first six ingredients. Continue whisking while you stream in olive oil to emulsify. Drizzle over salad.

2. Pour hot liquid over sliced shallots in a small canning jar. Top with lid but leave loose. Let cool on counter top. {They will soften and absorb the pickling flavor in about an hour, but the longer they sit the better, so if you think to do this a few days ahead, you'll get the best results!}

3. Refrigerate for future use.

1. In a small skillet, melt butter over medium high heat. Add brown sugar and stir, allowing the sugar to dissolve and the mixture to become bubbly.

2. Add the peaches to the sugar mixture and cook until some of the juices begin to leak out and the caramel mixture begins to thicken, about 3-4 minutes.

3. Flip the peaches to cook and caramelize other sides, turning carefully as not to break them up. Swirl them around a bit in the pan to coat them in the sugar mixture and cook for another 2-3 minutes or until the liquid has become syrupy and the peaches are softened and caramelized.

Note: These would be SO GOOD over vanilla ice cream. Or with a crumble topping. Or alone. They're good. Did I say that already?