A review of our visit to Echo Restaurant in Palm Beach, Florida.

How do you know if you have a passion for food?

For Chef Josef Morera, executive chef at The Breakers Hotel owned Echo Restaurant in Palm Beach, it was pretty obvious. While his high school aged counterparts were wrapping up their nights on the town in the wee hours of the morning, he was headed to work in the kitchen under the tutelage of a renown chef. That's a tough path to choose for an 18 year old guy just out of high school.

Making that decision was an easy one for Chef Josef -- though he had never cooked a day in his life, he just knew he wanted to dedicate his life to the culinary arts. And after getting a chance to taste his creations, I'd say it was a wise choice!

Steve and I were invited to visit Echo after hearing endless praise about the restaurant, so we decided to make it our Friday night date spot last week. For us, going out to eat is kind of a big deal since we choose to eat at home more often than not, but our curiosity was piqued by the rave reviews about this Palm Beach hot spot that's been open since 1999.

Upon arriving for our 7:45 reservation {which Chef actually forgot to secure for us. Oops!}, we were almost immediately ushered over to a small table in the back amidst both large groups and couples noisily enjoying Echo's fare. Though you might think of Palm Beach as a little on the stuffy side, Echo's patrons seemed comfortable in the trendy yet laid back atmosphere. 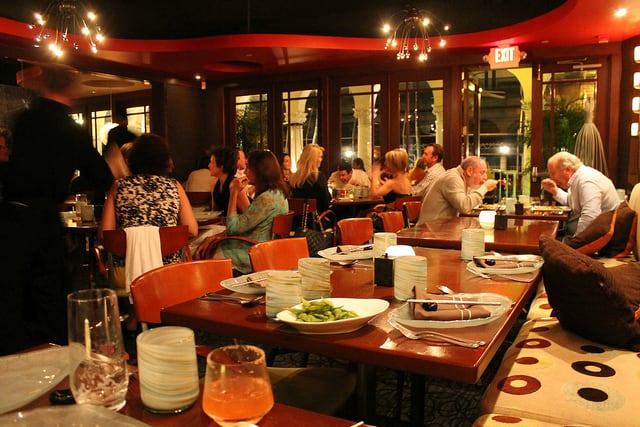 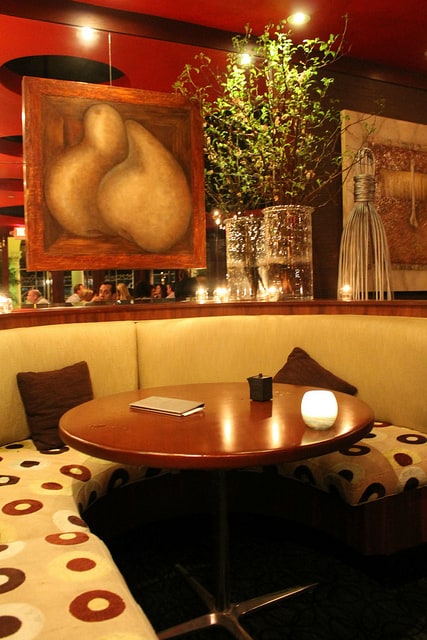 As we sat down I took in the vibe - the modern, yet organic setting set the stage for Echo's unique representation of the elements through food. {More on that later.} Being a girl who's all about the details, I was thrilled with little touches like the metal chopsticks which sat atop free form plates that reminded me of sea glass, and the earthy swirled water glasses. 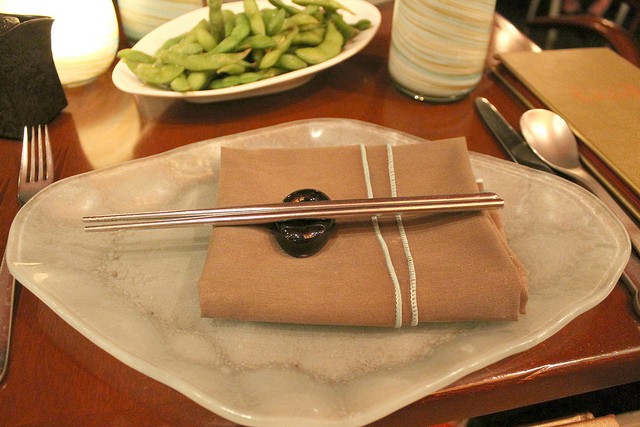 Once settled, our server {quite possibly one of the most adorable girls ever}, brought over a cocktail menu for us to peruse and some Edamame for us to nibble on. The descriptions of their creatively crafted libations made it difficult for me to choose {I get a bit giddy over a good drink menu}, but after counting out the vodka based drinks {vodka = imminent migraine/slow death for me}, I selected the Cardarum Cooler [$13], made with Mount Gay rum, Cointreau, Housemade Cardamom Syrup, Orange, Pineapple, & Lime juices and Coconut-Dusted Rim. {Um. Yes, please.} 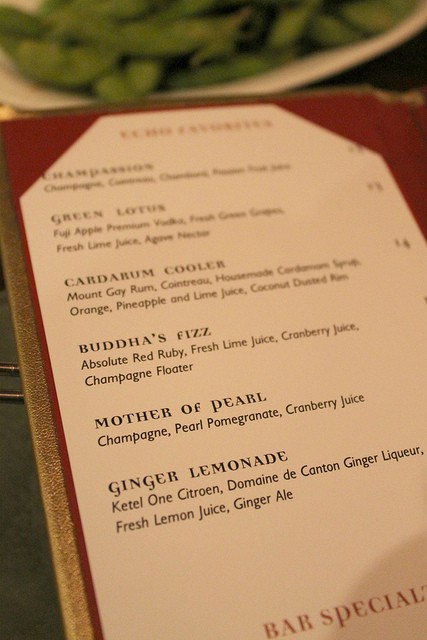 Our drinks arrived {Steve went the boring route with a Sapporo beer}, and we happily sipped while browsing the extensive menu. 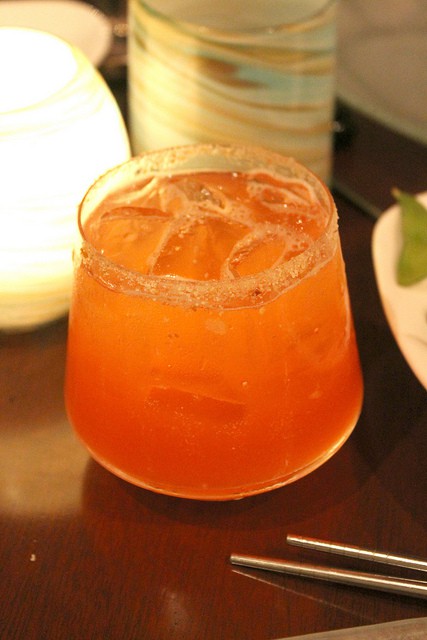 *Note: At this point I had a hard time concentrating because the noise level was a little out of hand, in part because we were seated directly next to an older couple whose conversation you could easily hear on the other side of the room. My favorite part of the night was when the gentleman loudly proclaimed, "That girl is taking pictures of all the food." Yes, yes sir I am. Haha! {As discrete as I was trying to be with no flash, it's hard to conceal a large DSLR camera.} 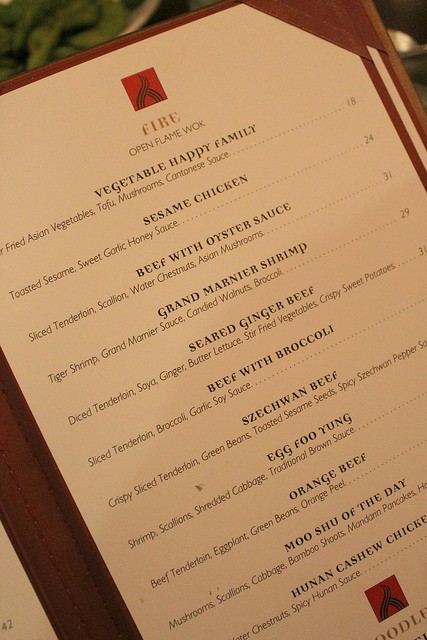 The menu is divided into sections by Element - Wind, Earth, Fire, & Water. Sushi & Sashimi, Dim Sum, & Noodle selections round off the menu and provide a little something for everyone.

Coconut with a Malibu Coconut Cream

**Steve's original selection was Thai Roast Duck, but after speaking with

Chef, his decision was swayed! 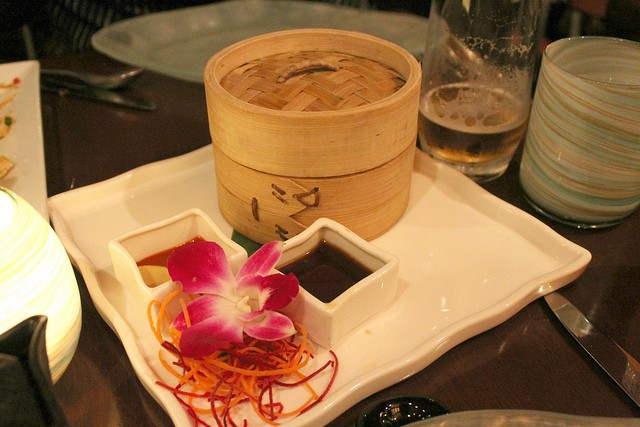 The Steamed Shrimp Dumplings [$11] were perfectly cooked little nuggets of fresh shrimpy goodness. I'm a huge spicy mustard fan so I dipped mine in the mustard/sriracha combo and had some happy taste buds! 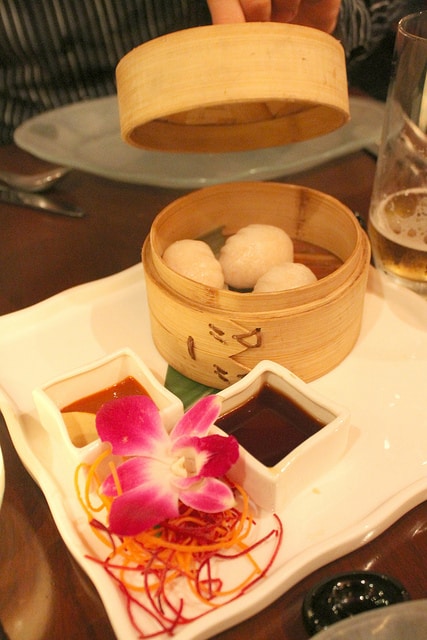 Chef sent out a plate of the Salt & Pepper Calamari [$13], which is quite possibly the best calamari I've ever had the pleasure of eating. Cut into small "planks" {which Chef explained comes from the fact that they receive large, fresh "steaks" of squid that they cut up}, seasoned to perfection, and fried with an super light & airy coating, this dish defies your notions of what calamari can be. {No round, greasy rubber bands here!} 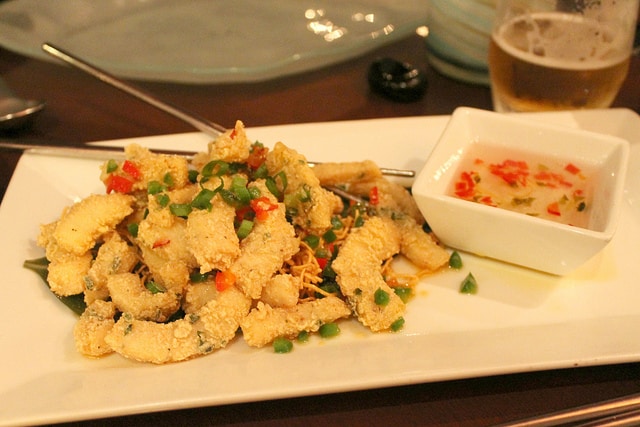 Another plate was sent out for us with a beautiful Seafood Cucumber Roll [$18]. Now, I like sushi, but I'm very unadventurous when it comes to rolls. {I'm talkin' California Roll & Smoked Salmon Rolls, folks.} I'm not one to choose expensive sushi restaurants as a dinner spot. But I have to say that this roll was the perfect palate cleanser before our entrees. I was surprised to enjoy the crunchy, refreshing texture of the cucumber "wrap" paired with the paper thin fish & crisp veggies. 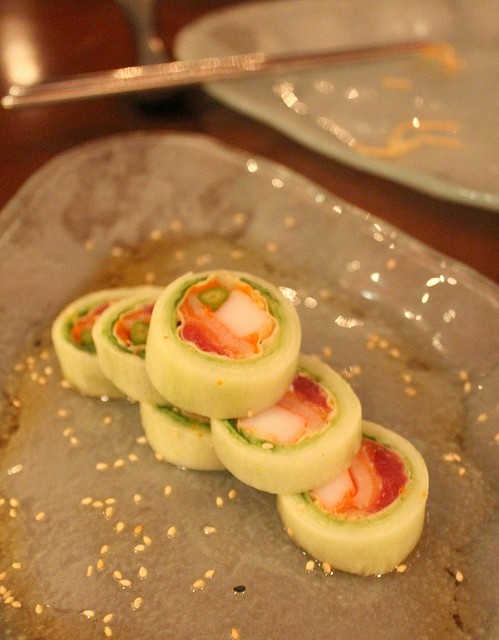 Though we were stuffed already, {Well... I was. Steve is never full.} we still had entrees waiting in the wings! Steve originally ordered Thai Roast Duck [$26], but was convinced after talking to both our server and Chef Josef to switch to the Peking Duck [$63] which comes almost in the same form as a fajita station. Neither of us had ever tried duck, so it was a fun experience. The shredded duck was served with veggies and a steamer basket of fresh "pancakes", which you smear with a rich, thick hoisin sauce and form into a little duck burrito. After one bite, Steve was sold! 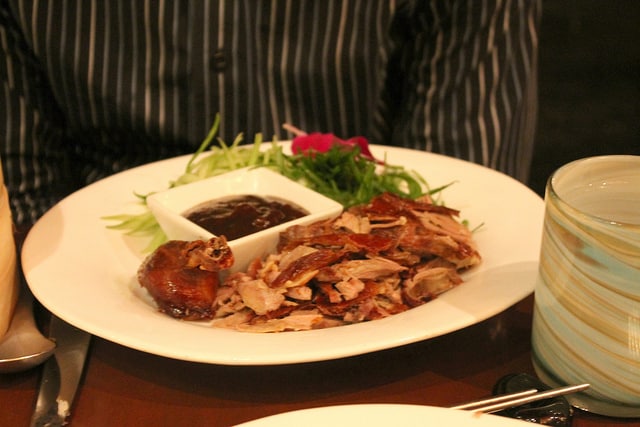 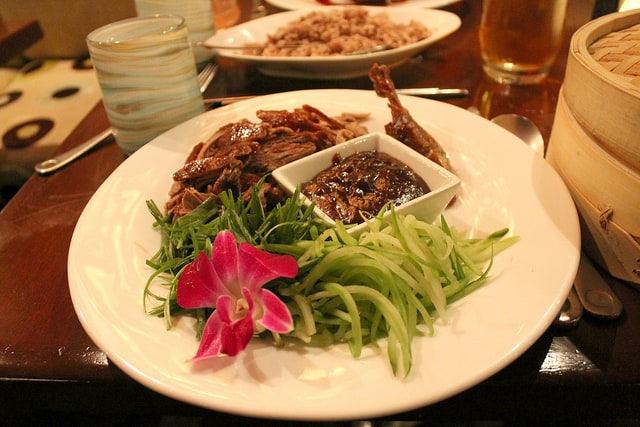 I chose the Sweet & Sour Halibut [$28] because it was highly recommended to me, and Chef agreed that it was a great choice. Presented in a crisp wonton basket, thick chunks of halibut lightly tossed in a delicious sauce give way under the crunch of a tempura coated shell. Though it was very tasty, I'm not accustomed to eating fried food and could only manage about 2 bites before I threw in the towel. If you're a fan of tempura, this is a great dish to try! If I chose fish again, I'd go for a steamed dish such as the Miso Sea Bass or Whole Red Snapper. 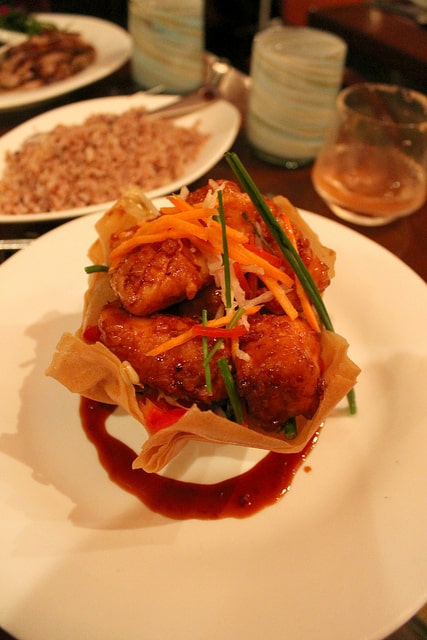 So... dessert. About 20 minutes into sitting at our table, our server {who, aside from being adorable was also extremely knowledgeable about the menu} came over to inform us that if we were interested in ordering the Souffle dessert, we needed to order it early as it takes 25 minutes to bake. I don't think I let her finish her sentence before I almost shouted, "YES!". Yeah, yeah... so I said I had no room left. But, LOOK at this thing! 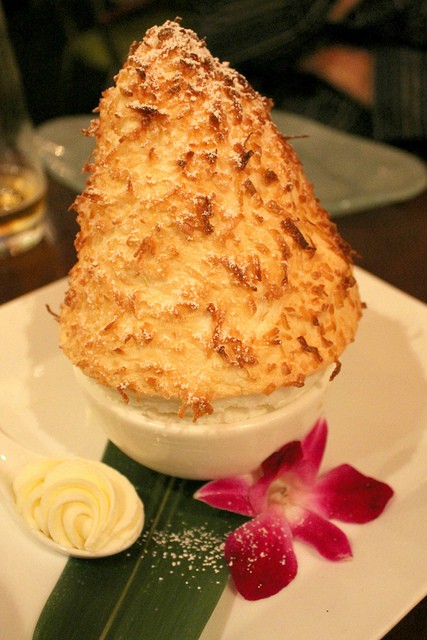 Imagine biting into a sugary cloud coated in sweet toasted coconut. That's basically what this is. A big puff of sweet, tropical air. Or, you know, Coconut Soufflé [$13]. Whatever. This dessert is all about the presentation. In fact, the new {less noisy} couple seated next to us ordered one immediately upon seeing ours arrive at the table. To be honest, I preferred the Malibu Coconut Cream on the spoon to the actual dessert, but I'm very glad we tried it and I highly recommend it to fans of meringue or soufflés.

At the end of our meal, Chef Josef stopped by our table for a visit and stayed long enough to tell us about his beginnings in the world of food; how he was thrown to the wolves by having to run a banquet sized omelet station... on one working burner. How he worked his way up from dish washing and food prepping to where he is now. To him, every grueling moment, every hour of insomnia, made worth it by seeing the faces of those who receive the dishes that he prepares with his hands but creates with his heart.

All in all, we left Echo stuffed fully understanding it's namesake -- something that continues to resonate  with you long after your first introduction.

Disclosure: Several of the dishes mentioned in this post were provided free of charge. No other compensation was received for this review. As always, all opinions written here are my own.