Guess what I did {or didn't do}? I wrote my Key West recap in one looooong post, then hit the "Cut" button to split the text into 2 separate posts {the first of which I shared yesterday}... and never "pasted" the second half onto anything. Nice job.

I left off yesterday at the end of our first day of restaurant & bar hopping. We woke up bright and early the next morning hungry {how, I'll never know} for a tasty breakfast, and decided to rent some bicycles from the Bed & Breakfast we stayed at to get around since my feet took a beating the day before.

Not far from our B&B, we found just what we were looking for at Croissants de France, a little French cafe with a big selection of pastries. Steve and I split a Ham & Cheese Croissant {SO good}, and he also had a Guava Pastry. I kept my eye on a Nutella filled beignet that was taunting me through the glass counter, but alas, decided to save my calories for later. I'm still regretting it. 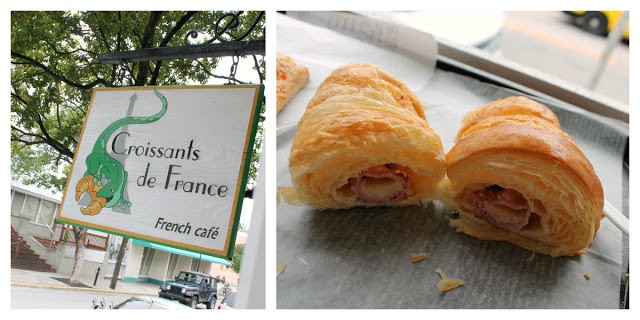 We did some more site seeing, biking, and browsing and before we knew it, we were hungry for lunch. {Are you really surprised?}

I had read some good reviews about a Cuban restaurant called El Siboney, so we biked our way there and each had a Cuban Sandwich for lunch {which was not 100% authentic, in my opinion, but was still very good!}. By the look of the lunchtime crowd, I'd say this spot is well loved by locals & tourists alike. 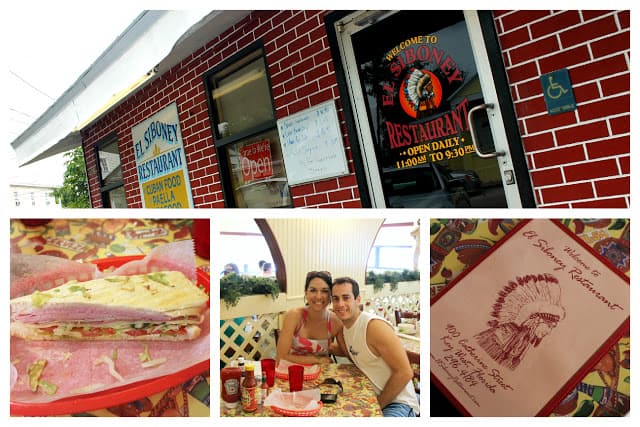 As the heat of the afternoon took it's toll, we decided to stop over at El Meson de Pepe, a charming vintage Cuba themed restaurant & bar, to continue with our Cuban lunch and cool down with some Mojitos... a must! They make them strong and delicious. {As is evident by our goofy behavior seen below. Sadly, I was too distracted by the fabulousness of the mojito to take a picture of it.}

I'll give you three guesses as to what we did next... That's right! More biking, more site seeing, more eating! You're so good.

Our next stop was obligatory, because you cannot come to Key West and not have a slice of Key Lime Pie. In fact, I'm pretty sure it's illegal. {Wouldn't that be funny considering all the other questionable behavior that is allowed in Key West?! Haha!}

So, we split a slice of KLP at Kermit's Key West Key Lime Shoppe and did our civil duty. It was good... and gone too fast. 🙁

At this point, we had been biking the whole day. In the hot, humid Florida summer. And I didn't care where we went, but it needed to be indoors, air conditioned, and close by.

Some live music, a snack, and a drink or two later...we hit the pavement again {not literally, the drinks weren't that strong}, and honestly, I can't remember what we did. {Ok, maybe they were.} But I know we wound up bar hopping and listening to a few live performances here and there...

And finally, perched on the balcony of Whistle Bar with a birds eye view of Duval Street. {Fun fact: Whistle Bar is the 2nd floor of Bull Bar. Just above it is a clothing optional rooftop bar called Garden of Eden ... enter at your own risk.} 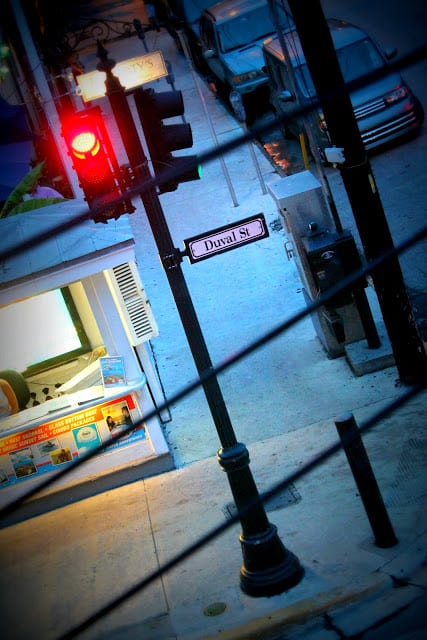 We got ice cream at Kilwin's {nothing like ice cream for dinner}, and headed back to the B&B for a good night's rest before the long drive home the next day.

The next morning, we {grudgingly} packed up our stuff, and considered our breakfast options before we hit the road. Steve was in the mood for diner food, and my only requirement was a cafe con leche. We found both at Harpoon Harry's, along with a really yummy egg & cheese breakfast sandwich served on Cuban bread. {Which I did not bother taking a picture of because I was in the mourning stages of dealing with our departure that day.} Another tip: Harpoon Harry's is cash only!

With only an hour or so left to spare, we biked off some breakfast calories around Mallory Square and made one final stop to pick up some souvenirs for the family. Even before we arrived in Key West, I knew what I as going to bring back for everyone... and no, it was not a trinket encrusted in seashells or a touristy t-shirt...

Because who would want one of those when you could have one of these:

These, my friends, are Mattheessen's half-pound cookies. These things are bigger than my head, no lie. I discovered them long ago and have been more enchanted by the thought of these magnificent creatures than I would have been if they sold unicorns and leprechauns.

Steve and I bought a big sugar cookie to share {I promise, one is enough} and nibbled on it all the way home... and still had some left over. If these don't say "I love you" as a souvenir, I just don't know what will.

Well, you can't say I didn't give you the lowdown on our trip. And that was just skimming the surface!

Sure, Key West is a great getaway if you're looking for sunsets and debauchery, but there's actually LOTS to do that doesn't involve eating and drinking, believe it or not. There's tons of shopping, museums {like the Ernest Hemingway House, which we didn't visit this time but did pass by and gawk at}, shows {if you are entertained by gentlmen who look better in a dress than most ladies}, water sports {if the weather cooperates}, and so much history.

If nothing else, you could spend hours just wandering up and down the streets looking at the beautiful cottages and eclectic inhabitants of this quirky island. 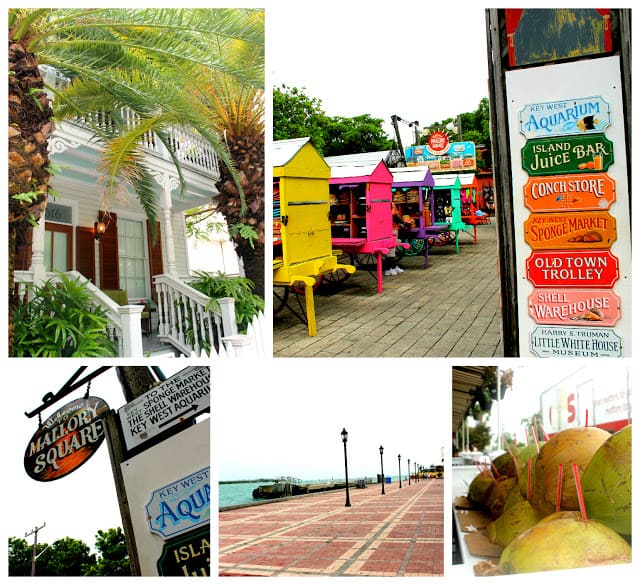 But until you can visit for yourself, make some Key Lime Pie and savor the flavor of Key West right from your kitchen. 🙂

Top
baked pie with the meringue. Bake an additional 10 minutes.