Jump to Recipe Print Recipe
Bacon & Asparagus "Risotto"! This may be "faux-sotto", but the flavor is REAL in this vegetable risotto -- made with spiralized summer squash and a creamy caulflower cheese sauce, this dish is loaded with veggies and springtime flavors that will keep you coming back for more. 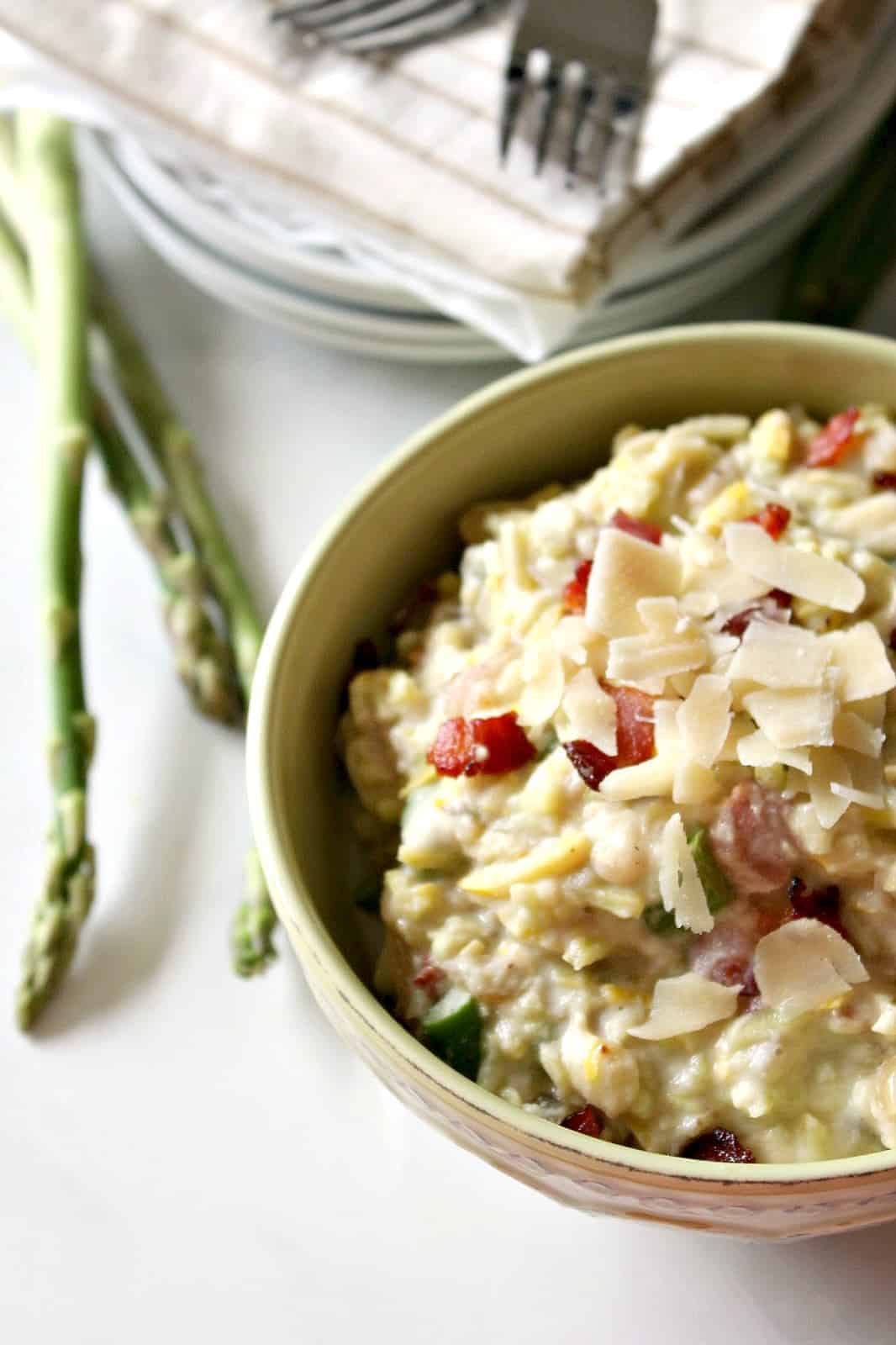 Here's a sad little truth: Bloggers do not get Spring Break.

Had someone told me this back when I was wielding a red pen as I graded neverending stacks of papers and biting my nails down to the quick during standardized test season thinking, "Whyyyyyyyyyy?", I may have stuck with that whole teaching thing... HAHAHA, Ok, I can't even say that with a straight face. So not true.

No, but really -- bloggers definitely don't get Spring Break. If anything, they work harder while other people are off so they can capitalize on all the fingers that will be Googling recipes and eyeballs that will be scrolling newsfeeds. With that said, I may have given myself a dispensation this year and spent the week going from story time to egg hunt to Easter activity with my little dude because, you guys, no one told me that 16 months is where it's at with kids. THEY ARE SO MUCH FUN. {And exhausting. Let's not forget exhausting. But mostly fun.} I mean, if you don't melt into a puddle of goo upon watching your toddler fill his basket with pastel eggs while wearing his spring best, then we might not be able to be friends. {Right now, anyway, because I'd be pretty annoying with all the "AWWW!!" Call me back when he turns 12 and I'm over it.}

Anyway, this is my way of telling you that I haven't made you anything in the shape of a bunny, chick or egg this year, and I'm sorry. But don't lose all faith in me just yet. You might love me even more for spending the limited moments I had in the kitchen this week creating this amazing recipe. 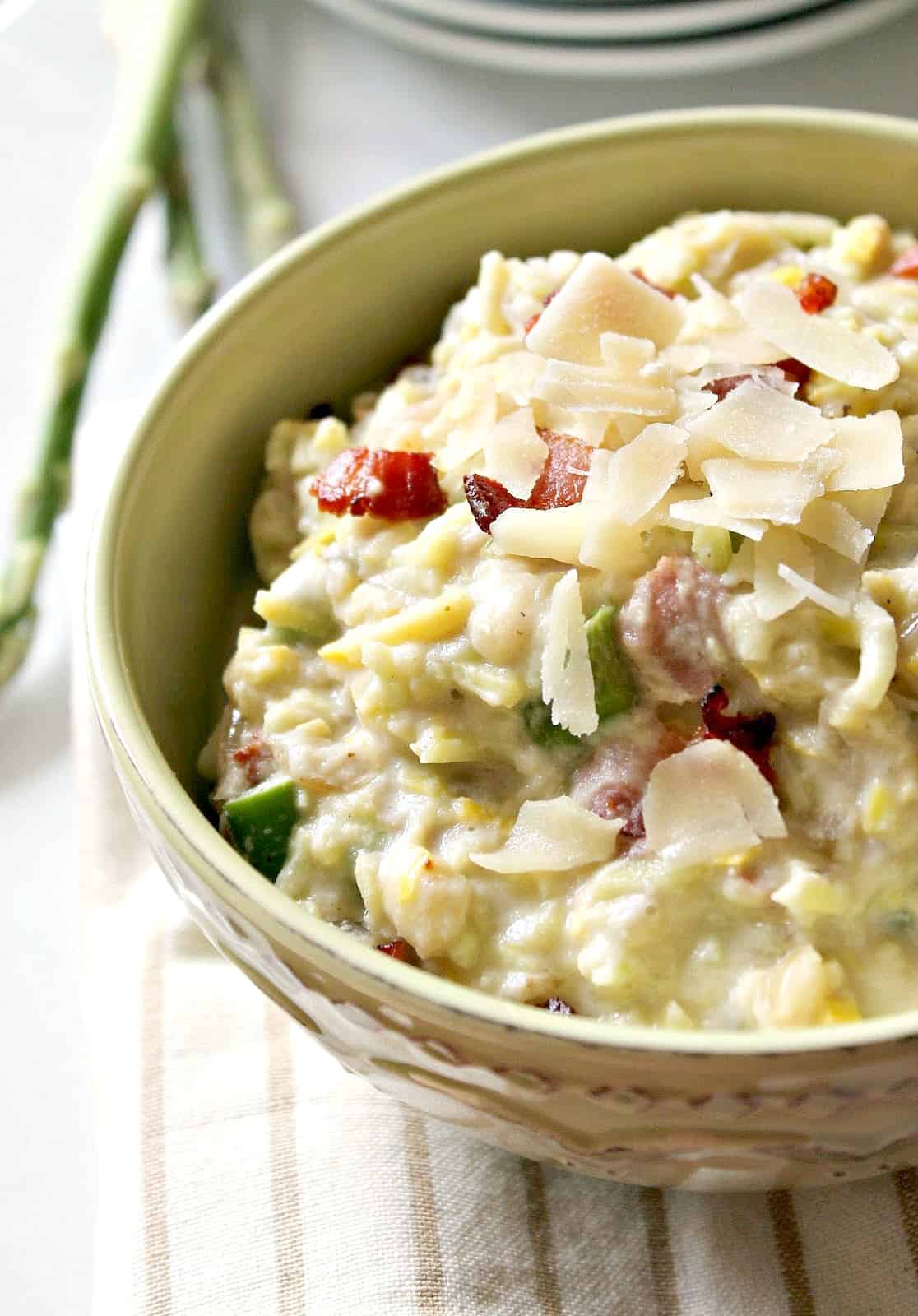 Would you believe me if I told you that this sumptuous bowl of "risotto" is really summer squash? And that that rich, creamy white sauce is made entirely of cauliflower?! Go ahead and sit down, I know you probably need a moment.

I can hardly believe it all myself. And I'm the one who made it. I did have a little help from my newest kitchen gadget, OXO's GoodGrips Spiralizer, which is probably one of the coolest things to arrive on my doorstep lately. While all you kids were sunning yourselves on the beach in Daytona {do people even go there anymore for Spring Break?! I'm so out of the loop.}, I spent Cole's nap times catching up with everyone else in 2016 who has already discovered the wonder that is a spiralizer. I'm a little late to the party, yes, but I think I've made a grand entrance with this recipe. 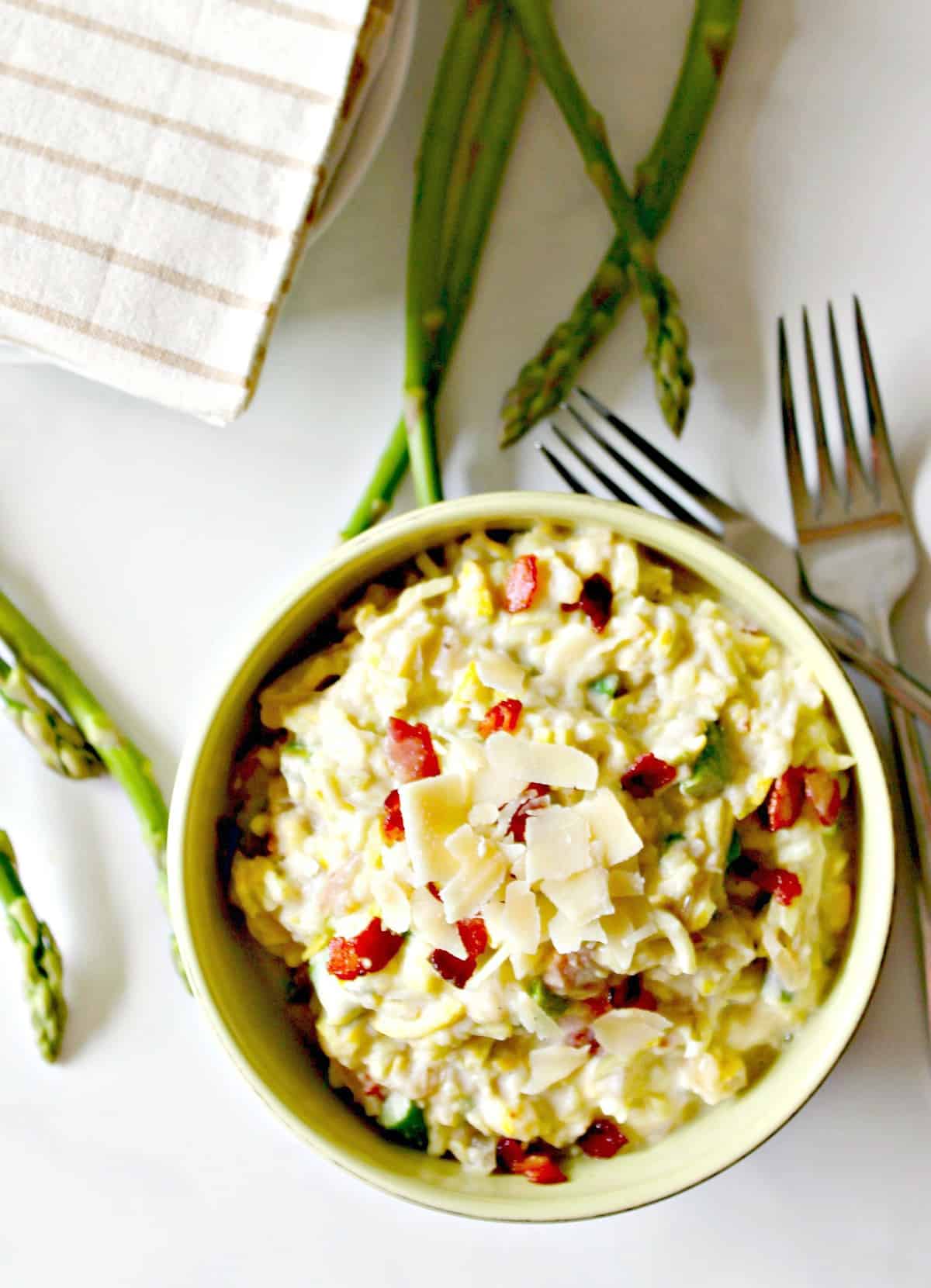 My veggied up version of risotto is as rich and luxurious as rice-based risotto, but without all the carbs post-meal heaviness! Save your trophies and medals of honor, though, because I went ahead and a little added bacon and cheese as a reward for not filling up on rice -- so, it's not all halos and six-pack abs, but LOOK AT IT. 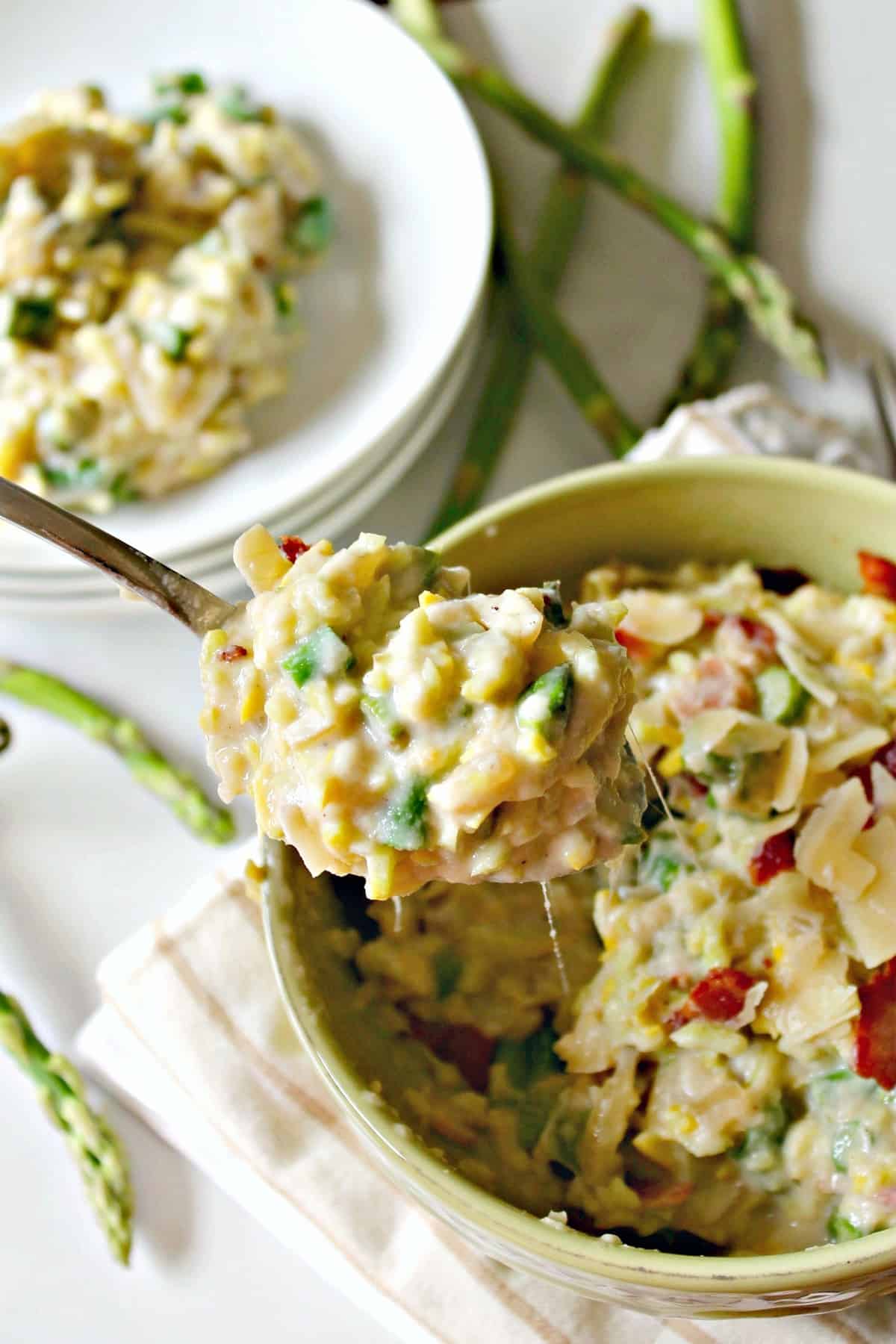 I'm so happy I stumbled upon this blog where the author spiralizes everything and anything, because that's where I learned that you can make "rice" out of vegetables other than cauliflower. {Though some of the creaminess here actually does come from riced cauliflower.} And in that moment, I just knew that my spiralizer and I were destined for great things.

So, after I ripped apart the box, took out all the pieces {and spiralized a zucchini or two just so I could see how the whole thing worked}, I got to work on coming up with something beyond zoodles. {Zoodles = Zucchini noodles for all you spiralizer noobs.} 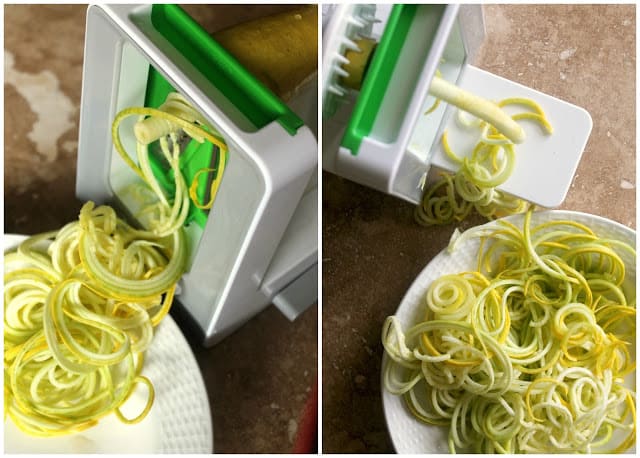 Gah. It's a thing of beauty. Buyer beware: You will definitely want to spiralize everything that will let itself be spiralized. You may be eating curly food for a while if you decide to invest in one of these gadgets, though in my opinion, that's a small price to pay for this wondrous tool that comes with several different blades and is super easy to clean. Can you tell I love this thing just a little bit?

Good news! Leftover Easter ham makes a great substitution for the bacon in this recipe, so now you'll definitely have an excuse to give it a try.

A Few Other Tips:

Whether you're "vegging out" this spring break or spending your time spiralizing veggies, I hope you have the best Easter weekend!

Disclosure: My friends at OXO sent me the GoodGrips Spiralizer for me to try out. As always, all opinions here are my own. 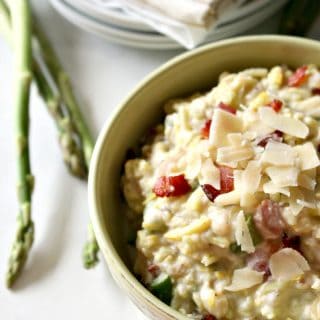 The Kitchen Prep
Bacon & Asparagus “Risotto”! This may be “faux-sotto”, but the flavor is REAL in this vegetable risotto — made with spiralized summer squash and a creamy caulflower cheese sauce, this dish is loaded with veggies and springtime flavors that will keep you coming back for more.
Print Recipe Pin Recipe
Prep Time 15 mins
Cook Time 20 mins
Total Time 35 mins
Course Main Course, Side Dish
Cuisine Italian
Servings 4 servings