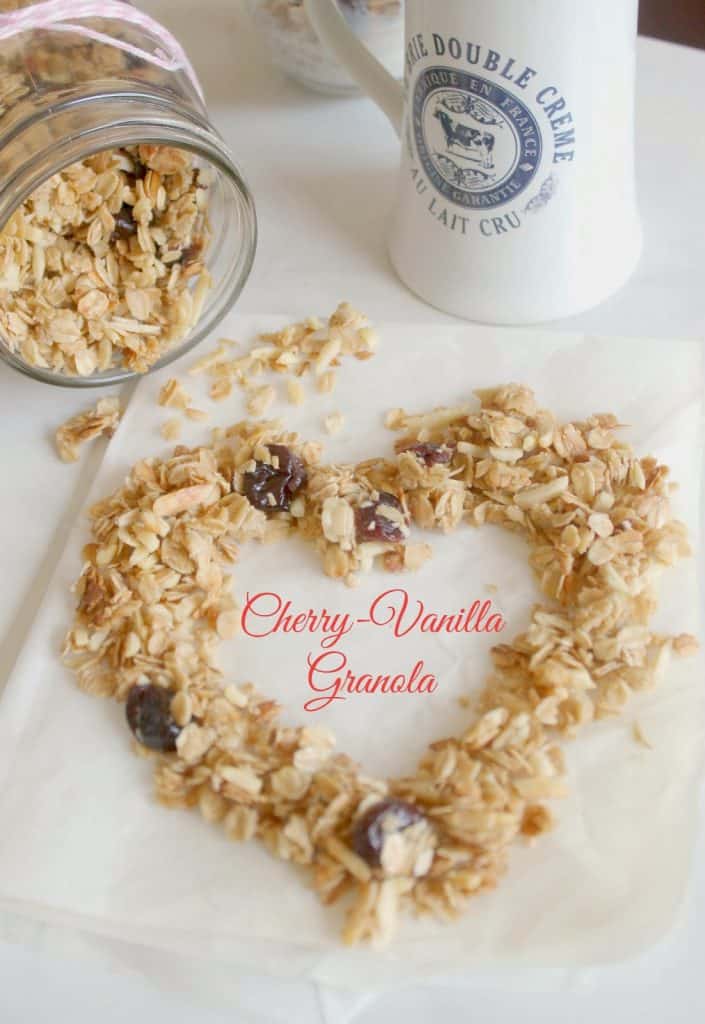 I'm about to tell you a really gross {albeit hilarious} story... somehow, I still haven't come to terms with the fact that the word "poop" has no place on a food blog. But, if you can hang in there, I hope there will be a little lesson that you can take away from my tale.

A couple of weeks ago, I witnessed a pure feat of determination that stuck with me long after it was over. And it all started when I took Farley, my lab, to the dog park to play.

Farley has forged friendships with all kinds of dogs in the dog park: A sweet, brindle Pit Bull mix named Stella; a lean, fast-as-lightning Greyhound named Dash; an amorous Black Lab named Lola. And then there's Tyson, a stocky little Boston Terrier with a jaw like a bear trap.

Tyson LOVES chasing balls. Well... to tell you the truth, the "chasing" is just a means to his true passion, walking around with the ball in his mouth and Never.Letting.Go. I'd say he may even be a tad bit obsessed. {I nearly lost a thumb while attempting to take it from him so we could play.}

In the midst of a rousing game of fetch the ball {which usually ends as quickly as it started because once Tyson gets it, there's no getting it back}, said ball landed right smack in a fresh pile of dog poo. Ew.

Tyson's owner, of course, carefully retrieved the tennis ball and placed it atop the bench and away from Tyson, who was already lamenting the loss of the prized object by growling and barking repeatedly at the soiled toy. But Tyson just couldn't come to terms with the fact that he would not be taking his victory lap around the park with that ball.

He defiantly walked over to the bench where the ball sat and stuck his nose through the slats, retreating violently when he caught a whiff of the offending odor. But guess what? That didn't stop him.

His owner and I watched incredulously as, again, he approached the ball. If dogs could pinch their noses, I swear he would have been doing so -- instead, I'm fairly certain he held his breath so he could get close enough. Tyson nudged the ball to the end of the bench where he could reach it more easily. With a swift and deliberate chomp, he retrieved the ball and pranced toward the other dogs, showing off the fruits of his determination.

Except, he only made it just a few steps before the stench {and I'm assuming taste} forced him to spit it out and re-access the situation. He shook his head. Hard, as if to rid himself of the smell that assaulted his sensitive little nose. But failure was simply not an option.

Again, the stubborn dog picked up the filthy ball and proceeded toward the other side of the dog park, dropping it every so often and "shaking it off", leaving us in fits of side-splitting laughter at his refusal to give up. This went on until he made it to the other side, safe from any potential ball thieves.

Eventually, when he noticed that no other dog wanted the ball and that their owners were laughing at him instead of praising his efforts, he shamefully walked himself to the corner and stood there looking sullen -- not sure of whether he should gloat with pride or hide with disgust at what he had just accomplished. His owner assured him that it was ok. No need for "dog shaming" here...this dog already looked so very ashamed.

Despite the somewhat nauseating scene, I held Tyson in high regard for his tenacity. Because let me tell you, there have been days when it's felt like I'm repeatedly attempting to retrieve a poop-covered tennis ball just to prove to myself that I can.

There are times when I choose to hope against all logic, because I want to believe that in the end, it will be worth it. Times when I've subjected myself to mental anguish because I know that I can get through it if I try hard enough. We've all dealt with things like this before.

Tyson reminded me that sometimes you just have to deal with sh*t {I'm sorry, but there's not a more appropriate time to use this kind of language} no matter how disheartening, embarrassing or frustrating. And when I get overwhelmed with the task at hand, I will simply pause, shake my head, and pick up where I left off because -- no matter how bad it stinks at that moment-- victory smells so much sweeter. 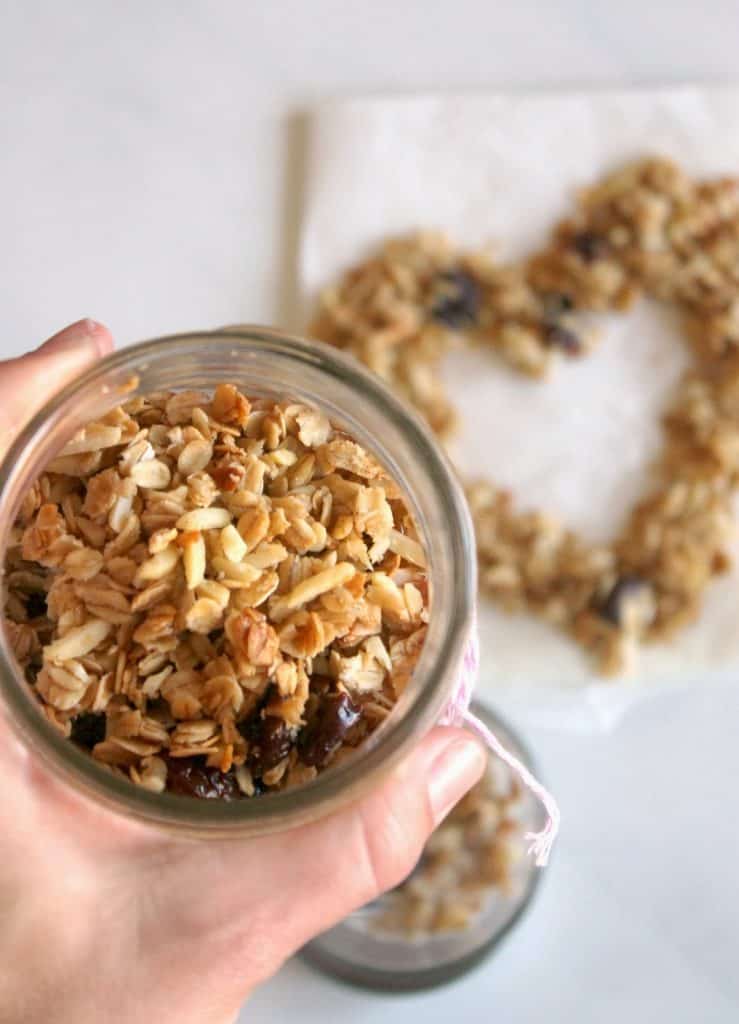 Earlier this week I attempted to make granola bars to take to work as a healthy snack. It didn't work. I didn't want use any sugar, which I think may have contributed to the crumbly results. 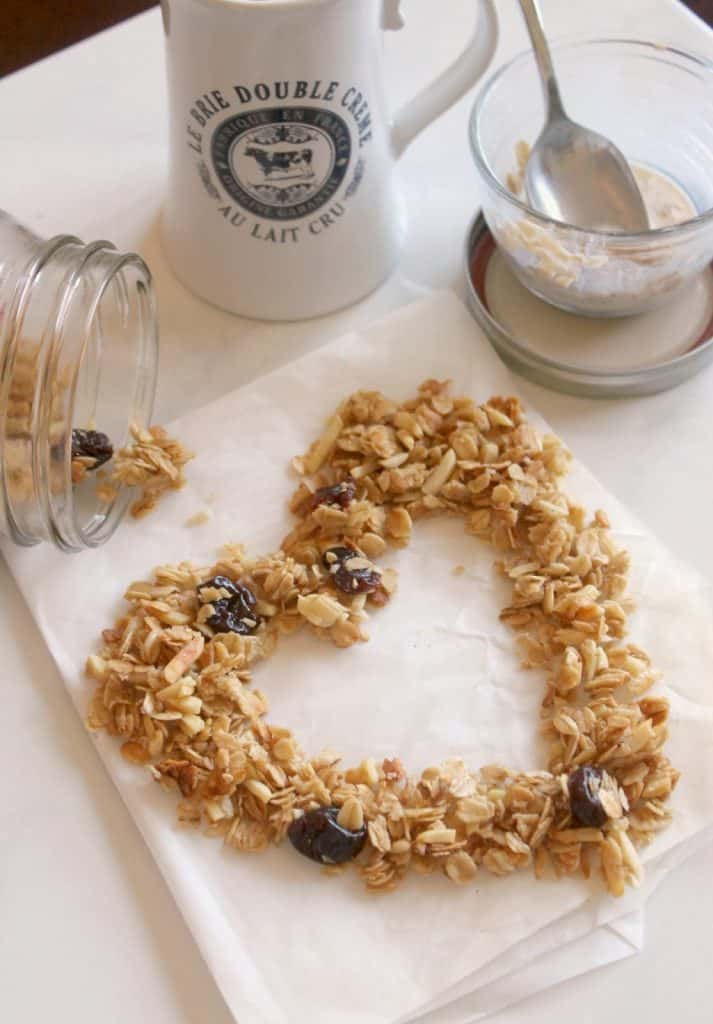 Like Tyson, the struggle didn't stop me. I scooped the delicious granola crumbles into a mason jar and I've been enjoying them with a little almond milk or straight up as a snack. Sometimes the things that don't work out quite as you expect turn out to be a happy accident. 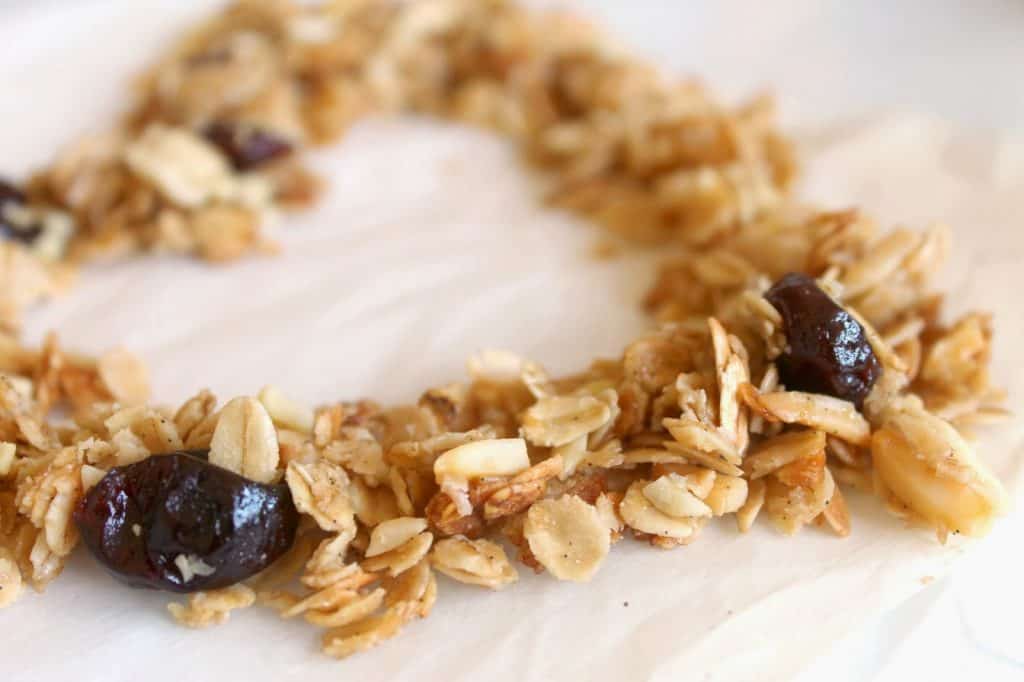 This Cherry-Vanilla Granola is what granola-filled dreams are made of. Tart, chewy dried cherries and crunchy slivered almonds are sweetened with a combination of honey and maple syrup infused with fragrant vanilla bean. One of my favorite parts of eating this granola is the vanilla bean-flecked milk that's left over at the end... it's the grown-up version of the thrill you got as a kid when you discovered Cocoa Puffs created its own chocolate milk byproduct. {Not that I wouldn't be just as thrilled if I allowed myself to eat Cocoa Puffs today.} 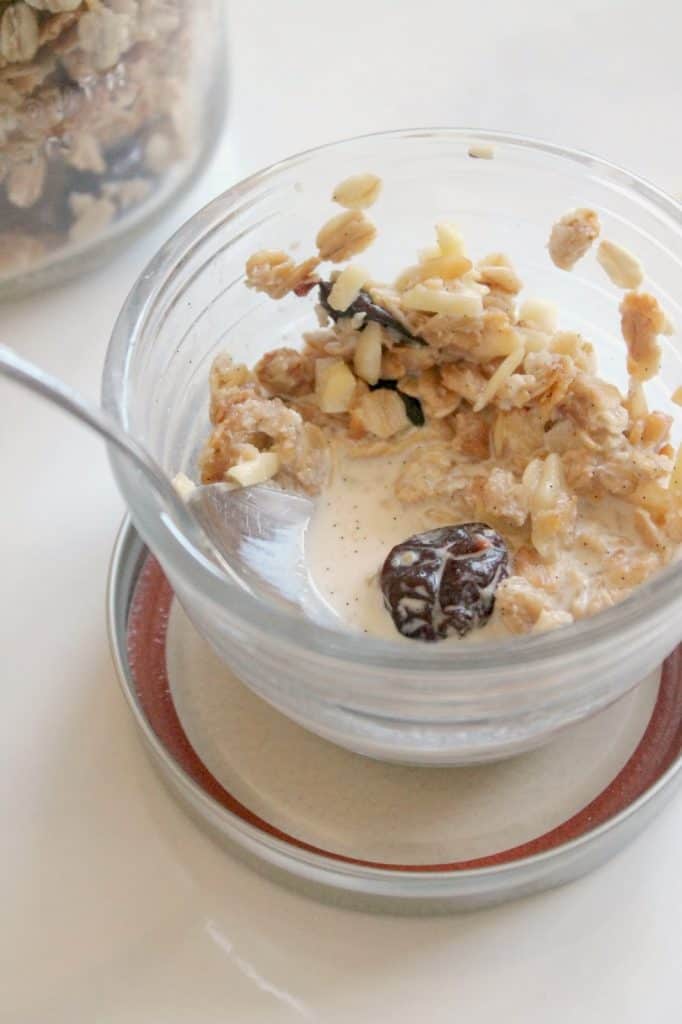 Whether or not this granola was intentional, it is most definitely a treat.

1. Prepare a sheet pan or 8x8 inch pan {that's what I originally used when I thought I was making bars} with parchment paper or foil. Preheat the oven to 375 degrees.

2. In a large bowl, toss together oats, salt, almonds and cherries. In a small pot over medium heat, stir together coconut oil, maple syrup, honey and vanilla bean seeds along with the vanilla pod. Bring to a bubble and allow to simmer on medium-low heat for about 5 minutes.

3. Remove the vanilla bean pod and pour the syrup mixture over the oat mixture, stirring until well-coated. Pour into prepared pan and bake for about 15 minutes until slightly golden and fragrant.

Cool completely and store in an air-tight container. 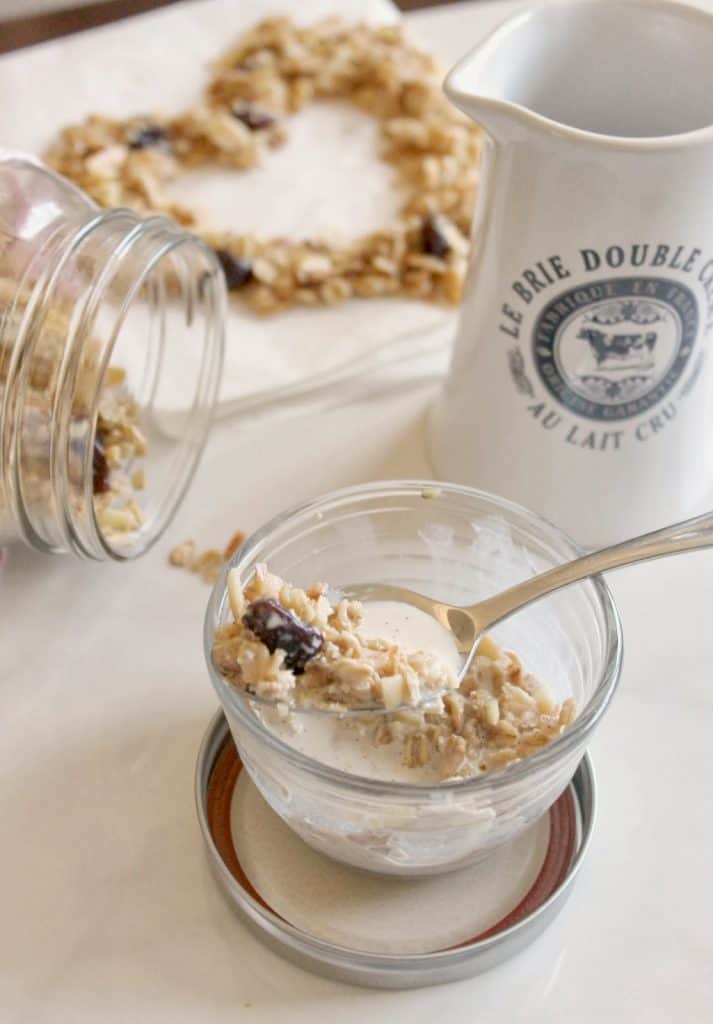