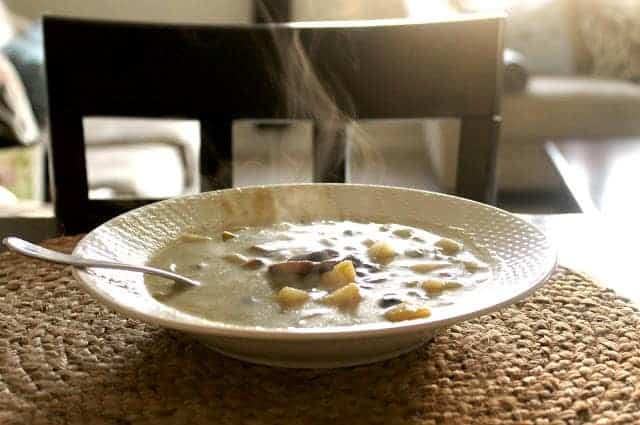 I am loving our little trips to the produce store I mentioned a few weeks ago. Loving.

Half the time I don't even have plans for what I'm going to make with the things I buy. I just wander up and down the {two. Yes, two.} aisles and pick up whatever tickles my fancy.

"Why, hello, weird looking vegetable. You will be very happy in my kitchen. Hi there, pretty leafy green. In the basket you go."

I'm like a kid in a candy store. {With less risk for cavities.}

It's been kinda fun buying produce that I've never cooked with before. For one, we've upped our veggie intake quite a bit. And our meals have gotten a lot more exotic and creative.

Normally, once the mercury starts rising {and around here, it already has}, the dishes I'm inclined to make are lighter, cooler, and as simply prepared as possible. {Sorry, oven, we're already roasting without your help.}

But when I bought some poblano peppers last week and then found a recipe for Creamy Potato Soup with Poblano & Mushrooms, my craving beat out the sweltering temps and I made up my mind to crank up the air conditioning and making a pot of steaming hot soup for dinner.

It was a good decision. 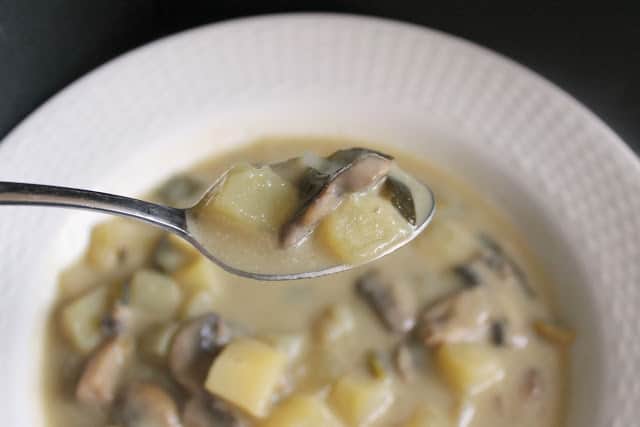 The charred poblanos add a spicy kick to the soup, and I love the heartiness of the potatoes and mushrooms.

Step outside your comfort zone and pick up some veggies that catch your eye next time you're in the grocery store. If it turns out half as good as this soup, you'll be glad you ventured outside the "broccoli zone". 🙂 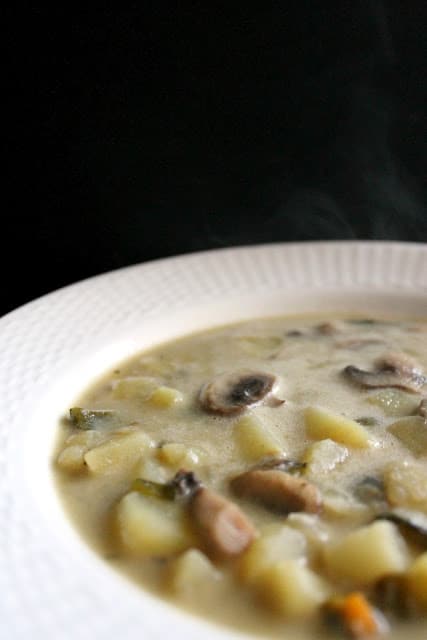 In a medium skillet, heat oil over medium heat. In a medium pot, add chicken broth and water and bring to a boil.

Add onions to skillet and saute until translucent, 3-4 minutes. Add garlic and peppers, saute for another minute or two. Finally, add mushrooms, and saute until slightly cooked down.

Add skillet mixture to pot with boiling broth, followed by potatoes. Reduce heat and simmer for about 15 minutes or until potatoes are fork tender.

Scoop out about half the vegetables and about ½ cup of broth {less vegetables if you want your soup more chunky}, and puree in a blender. While blender runs, add ½ cup of half and half.

Return the puree to soup and stir well.

Reheat the soup to a simmer and season to taste with salt and pepper.
*To char peppers: Set oven to broil. Move oven rack to highest spot. Line a small baking sheet with foil. Place whole peppers on baking sheet and put on highest oven rack. Allow peppers to cook until skin blisters {about 4-6 minutes}, then flip and broil other side. {Keep an eye out, the broiler is powerful}.

Remove peppers from oven and allow to cool enough to handle.  You should be able to easily remove charred skin from pepper. If not, place peppers in a brown paper bag or plastic bag and allow steam to loosen skin until it is easier to peel off.