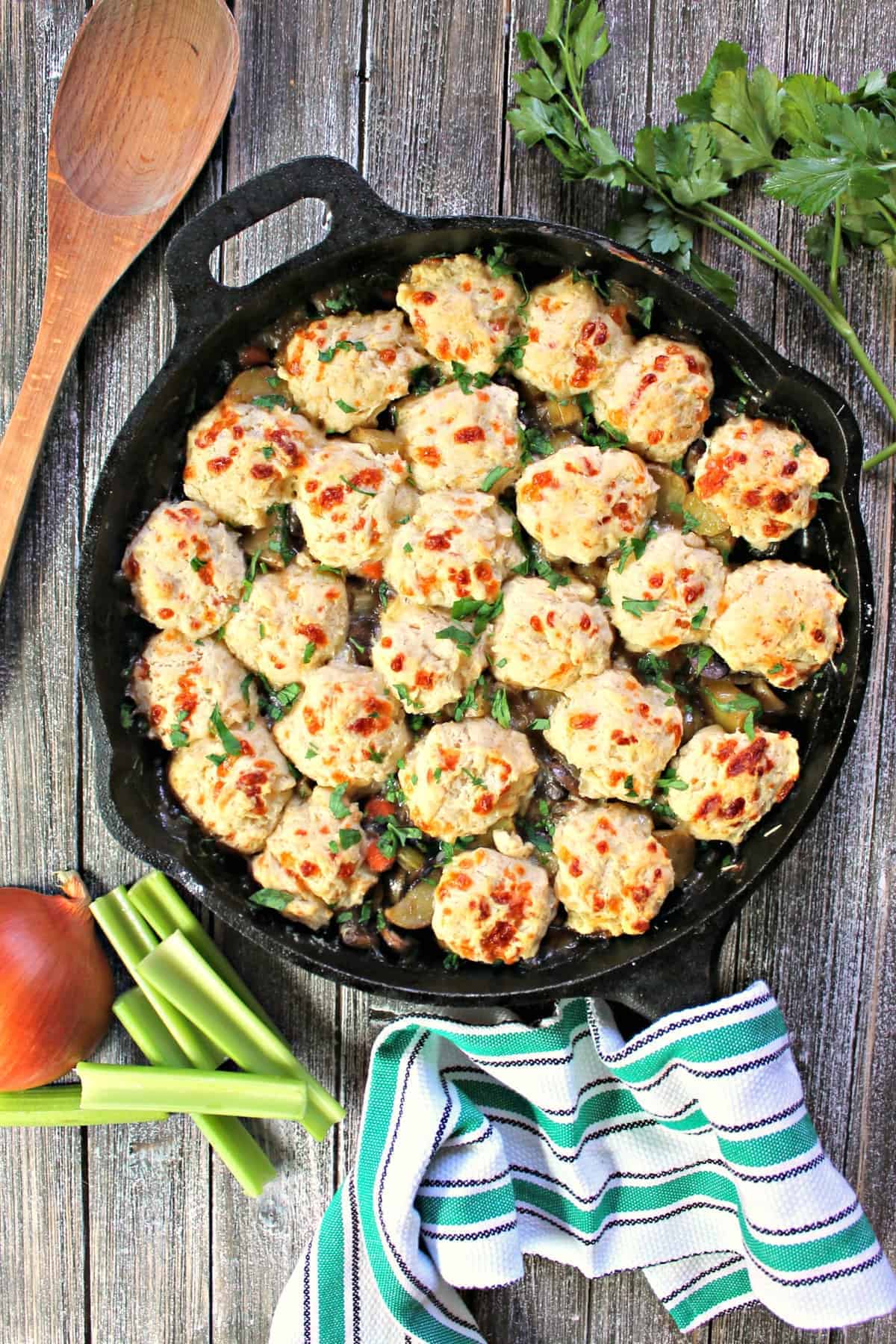 Note: This post was originally created on March 3, 2013. The recipe was updated on March 5, 2019.
I attended a small Catholic school as a kid. Our school "mascot" was The Shamrock. Exciting/menacing, I know.

Anyway, because of our obvious ties to the emerald emblem, I grew up with a strong appreciation for St. Patrick's Day & figured that everyone else in the world celebrated it as enthusiastically as we did. {For us, it was "Spirit Day". Read: Pep rally, fun activities, and the biggest thrill of all -- getting to come to school dressed in non-uniform attire.}

Imagine my surprise when I discovered that adults liked celebrating St. Patrick's Day, too... just for different reasons.

As fond as I am of St. Patrick's Day festivities & fare, I've never really been one to dye food unnatural {and unappetizing} colors for the sake of thematic authenticity. Maybe that's the reason I've never hopped on the Red Velvet bandwagon; but I digress.

Now, beer, on the other hand. That's a celebratory tradition I can stand behind. {Again, minus the dye.} 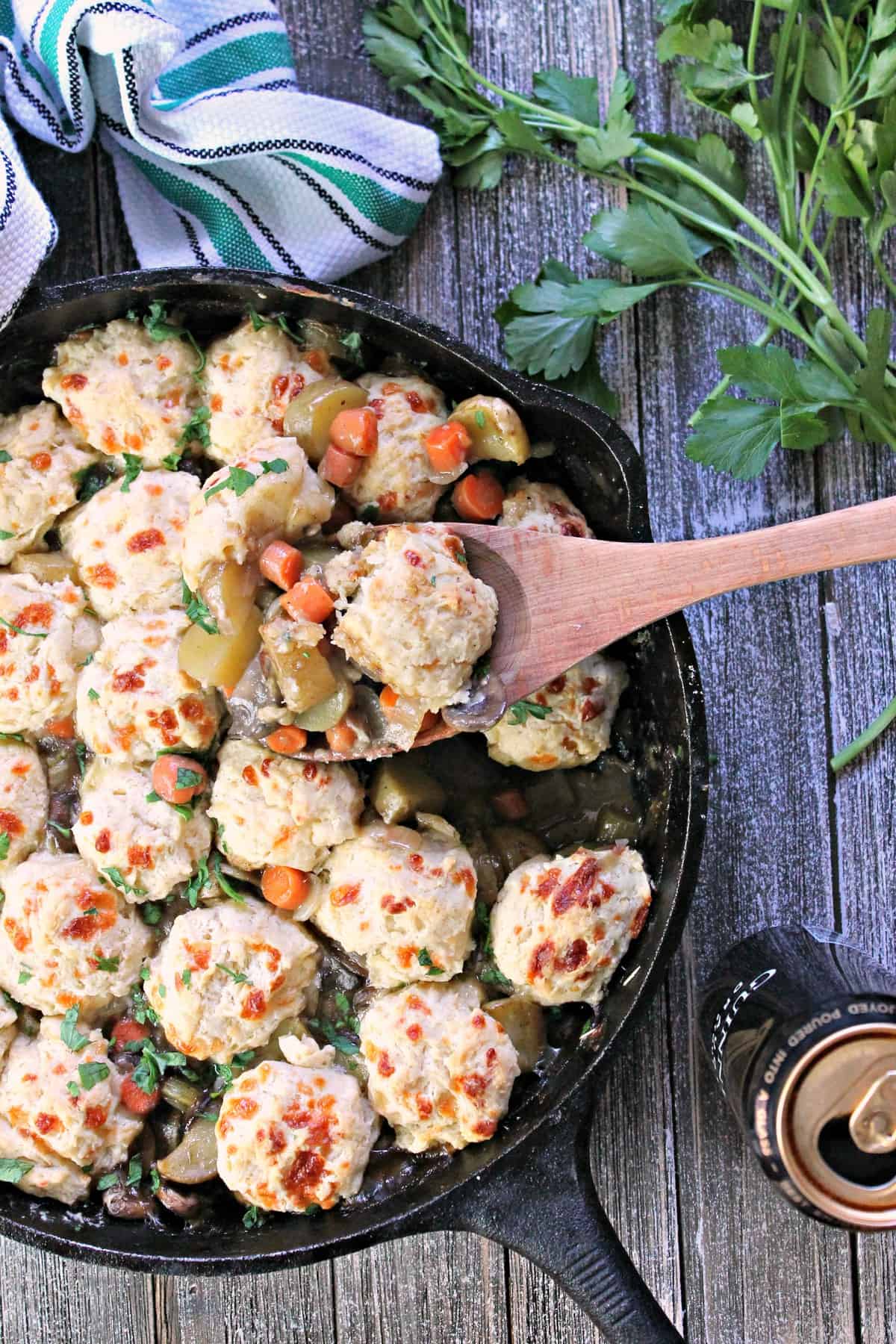 This recipe idea for Savory Guinness & Veggie Cobbler came to mind out of nowhere {after my initial idea drought}, and I just had to try it out and see if it would work. It did! Though sadly, it didn't look as pretty as it tasted the first time I gave it a try. {See original photos from 2013 below. Yikes.} However... if you're the type that wouldn't let a perfectly drink/meal/dessert go to waste just because it's tinted a funky green color, then maybe you can overlook the aesthetic flaws of this dish, too. 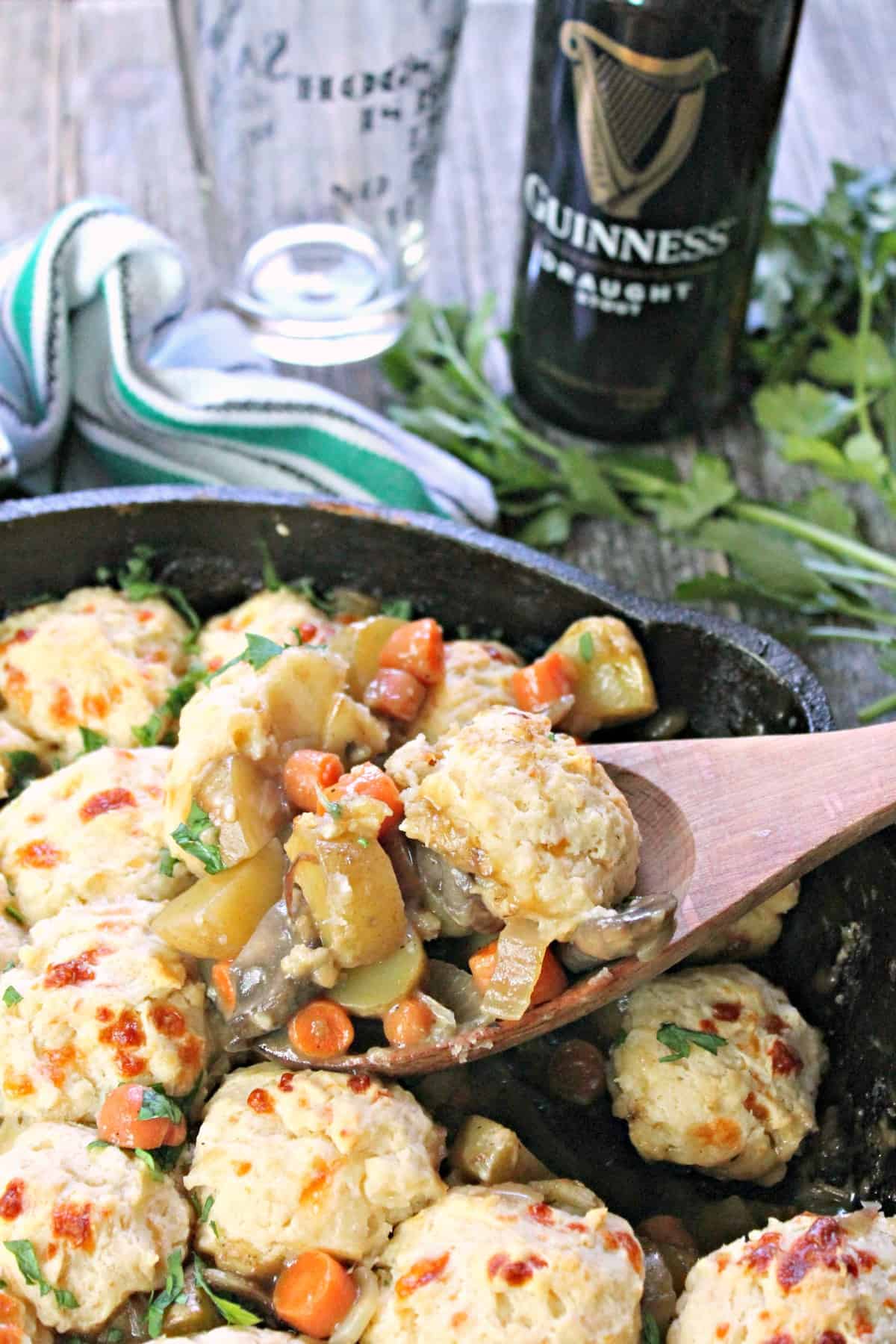 While Guinness is perfectly fine on its own as the star of the show for an evening of carousing, it plays a great role in the background of this rich, hearty meal as well adding deep flavors the "gravy." I made mine a vegetarian version, filled with onions, carrots, celery, mushrooms and potatoes, but I bet it would be good with beef or chicken for the meat-eaters among you.

The top of this savory cobbler of sorts is dotted with the most delicious, cheesy little drop biscuits. They come together quickly as you're finishing off the filling, and are dolloped atop the stewy mixture before being baked to golden perfection in the oven, giving them almost a dumpling-like texture. I used Irish cheddar to go with the St. Patrick's Day theme, but you're welcome to use whatever cheese you like best.

Another "lucky" element to this dish? It all comes together in one skillet so there's less cleanup and more fun to be had. A large, deep cast iron skillet works well here, but any deep skillet that can go from stove top to oven will do.

If you're looking for something a little less "shamrocky" to make for St. Patrick's Day {or need something to help soak up those pints of green beer}, give this a try. It's a nice, savory alternative to many of the sweeter Guinness recipes that are popular this time of year. Otherwise, check out these other boozy delights from past posts!

Or these cute Pot O' Gold Favors for the kiddies. 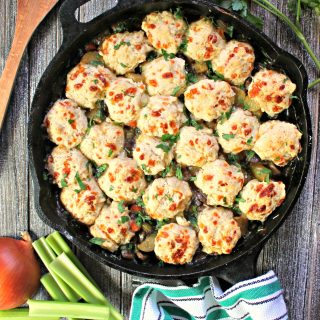 Biscuit Topping recipe adapted from The Salty Marshmallow *I used a 1 pound bag of Teeny Tiny Potatoes from Trader Joe's, quartered.
** If you prefer more gravy, increase the broth to 1 ¼ to 1 ½ cups

Here are the original {terrible!} photos of this dish for your viewing/mocking pleasure! 🙂 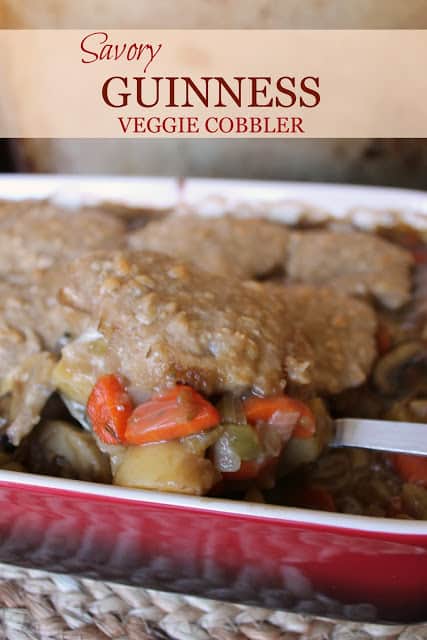 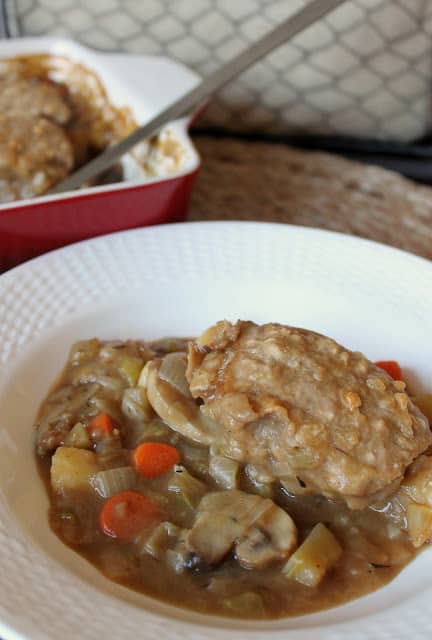 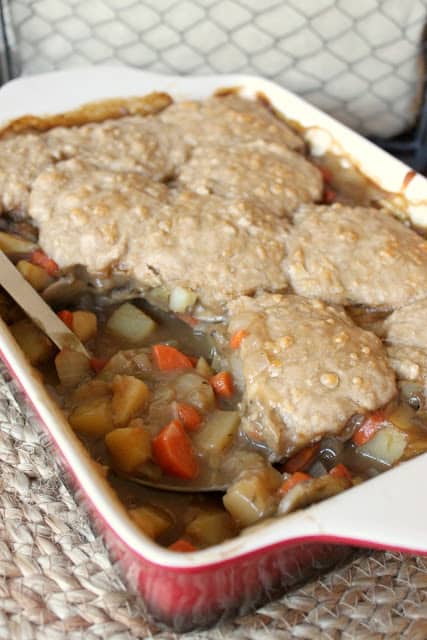