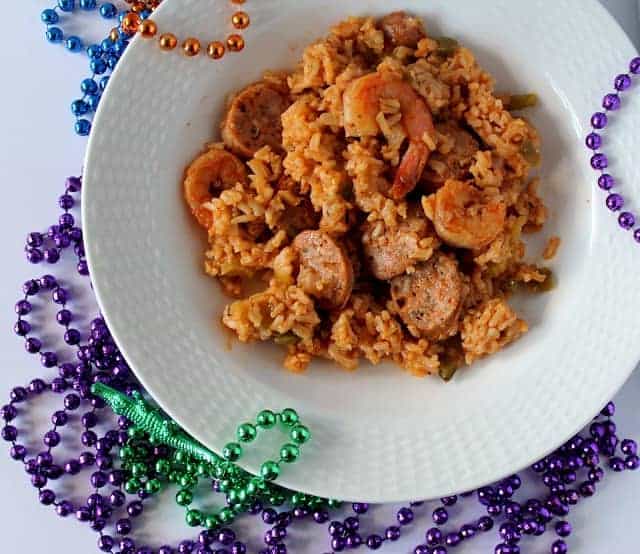 This week kicks off Mardi Gras, the gluttonous and debaucherous festival that is celebrated near and far; from revelers on the streets of New Orleans to homes, bars, and restaurants nationwide. Like St. Patrick's Day, Cinco de Mayo, and various other festive days on our calendars, many have jumped on the celebratory bandwagon though most have no idea what or why they're celebrating to begin with.

Let's face it: We like to party. And we don't need a reason.

Since I'm down with any occasion that calls for food and drink{s}, I thought I'd pull out my feathered mask and don my Mardi Gras beads {purchased, not "earned", of course} and post a few recipes this week that will get you into the spirit whether Bourbon Street is down the road or on the other side of the world from where you live.

But first, some history about Mardi Gras. {I never said these recipes wouldn't come with a price.} Literally translating to "Fat Tuesday" in French, Mardi Gras preceeds Ash Wednesday {imagine that, a Tuesday that comes before a Wednesday.} which commences the Lenten season on the Christian calendar. Basically, Mardi Gras is the last chance to get sinful behaviors out of your system before the start of Lent - a time of fasting, repentence and prayer - in the weeks days leading up to Easter.

In New Orleans, Mardi Gras is synonymous with "PARTY!" and the rich tradition of music, food, and celebration has been around for ages. {Since the 1700's, in fact, according to this source}.

Sadly, I've never been to New Orleans, though it is on my list of places to visit soon. {Hint, hint hubs!} I have to admit that now that I'm well beyond my college years, I don't feel like I'm missing out on too much by not attending Mardi Gras. {If I want to trip over intoxicated people, I would rather do so in the comfort of my own home after a few bottles of wine on girl's night. But thanks.} I do hope that one day I'll get to make my rounds in the Big Easy and check out all they have in store for foodies as they're known for some good eatin' in those parts. 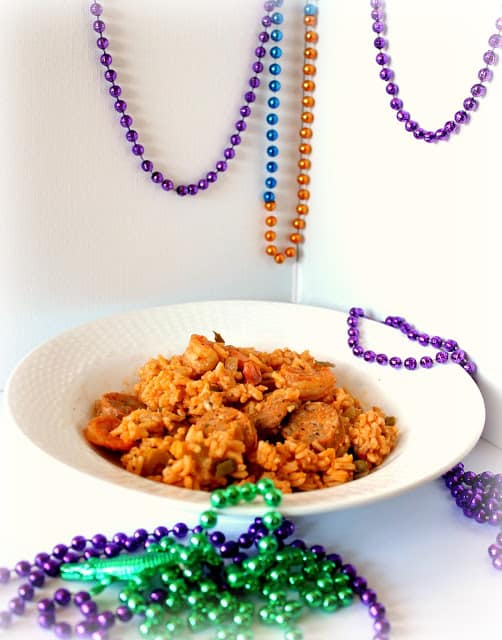 I can't vouch for the authenticity of this Cajun Jambalaya recipe {aside from the fact that it's adapted from Emeril's recipe}, but I can say that it definitely isn't lacking in the flavor department. It's rich, spicy, and delicious. And not all that difficult to put together, which makes it a winner in my book. 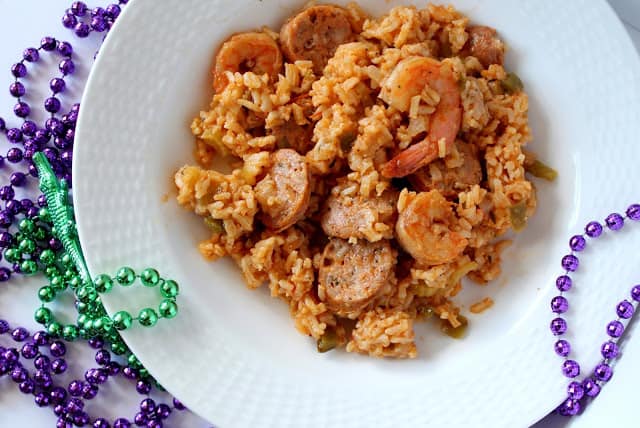 So, get into your kitchen and, in the words of Mardi Gras revelers..."Laissez les bons temps rouler"! {Let the Good Times Roll}

Creole Seasoning
Combine all ingredients thoroughly. Store in a cool, dry place.
For Jambalaya:
In a bowl combine shrimp and Creole seasoning well, set aside.
In a large saucepan heat oil over high heat. Add onion, pepper and celery,  and saute, 3 minutes. Add garlic, tomatoes, bay leaves, Worcestershire and hot sauce. Stir in rice and slowly add broth. Reduce heat to medium and cook until most of the liquid is absorbed and the rice becomes tender, stirring occasionally, about 15 minutes.
When rice is just tender, carefully stir in shrimp and sausage. Cook until meat is done, about 10 minutes more. Season to taste with salt, pepper and Creole seasoning if desired.