Cubanelle peppers make the perfect vessel for stuffing with savory filling! Packed with flavorful, Italian-inspired sausage and rice mixture and baked until tender, these peppers will become a favorite.

These Italian Stuffed Cubanelle Peppers are the real deal when it comes to flavor! Packed with Italian sausage, rice, herbs and more, don't be surprised if these become a favorite in the weekly rotation.

The first time I laid eyes on cubanelle peppers, I remember thinking they looked fake; like shiny, plastic vegetables for a kid's Fisher Price kitchen set. I was so intrigued by their size, shape and color that I knew I had to buy them and experiment with them in my (real) kitchen!

What are Cubanelle Peppers?

Cubanelle peppers, sometimes known as Italian Frying Peppers or Cuban peppers, are a variety of sweet pepper popular in both Latin American & European cuisines. They have a long, sometimes twisted shape and can be found in shades from bright yellow-green to red when allowed to fully ripen.

Their thin skin makes them a good option for quick-cooking meals. Mild in flavor, they're often found in sofritos, the aromatic base for many Mediterranean, Latin American, Spanish and Portuguese recipes.

Whole, fresh Cubanelle peppers will last for weeks in the refrigerator. Cooked peppers should be stored in an airtight container and used within a few days.

The star of this recipe is, you guessed it, cubanelle peppers! But the flavorful filling ingredients are really what make it pop. A few notes about the ingredients used here:

Prep your Cubanelle peppers by slicing off the tops. Using a sharp knife or your fingers, remove the seeds and membranes from the pepper. Set them aside until you're ready to fill them.

Make the filling by browning up the sausage with the onions and garlic. Add the marinara sauce or crushed tomatoes and the stock. Let the mixture simmer until it thickens a bit and the liquid is somewhat reduced. (If you are using uncooked rice, then add it after the broth and allow it to simmer in the liquid.)

Next, add the fresh herbs, rice and cheese. Mix it until fully combined. This mixture can be used for regular stuffed bell peppers, too.

Once the filling is made, it's time to stuff the Cubanelles. Using a spoon or a mini cookie scoop (one of my favorite kitchen tools!), carefully fill each pepper all the way to the top. It's ok to pack in the mixture a bit.

Place the stuffed Cubanelle peppers in a baking dish and pour in the remaining ¼ cup of stock (this will help to steam and soften the peppers while they bake). Cover the dish tightly in foil and place in a preheated 400 degree oven. Depending on the thickness of the peppers, it should take about 45-50 minutes for the them to become tender.

Cubanelles are considered mild or low heat peppers. On the Scoville Scale of measuring the spiciness of peppers, Cubanelles measure 1,000 SHU. For reference, however, a regular bell pepper measures 0 SHU and a mild pepperoncini (banana pepper) measures 900 SHU.

What is similar to Cubanelle peppers?

Anaheim Chiles are said to be similar to Cubanelles and make a good replacement, though they offer a little more heat. Otherwise, sweet bell peppers make a decent substitute.

What are Cubanelle peppers used for?

The long, hollow shape and thin skin of Cubanelle peppers makes them ideal for stuffing! They can also be sliced and used as you would bell peppers, for sautéing, frying or roasting and adding to just about anything.

Can I make stuffed Cubanelle peppers ahead?

Yes! These stuffed Cubanelles are a perfect make-ahead meal. You can either prep the filling and store in an airtight container in the refrigerator a day or two before and then prep and fill the peppers just before cooking, or go ahead and stuff the Cubanelles with the filling, place them in a well-wrapped baking dish and keep refrigerated until you're ready to bake them.

What are some substitutes for Cubanelle peppers?

If you can't find Cubanelle peppers in your local grocery store or farmers market, you can simply use sweet bell peppers, Anaheim peppers or Poblano peppers if you don't mind a little heat.

Looking for more ways to enjoy stuffed peppers of all kinds? Check out these recipes! 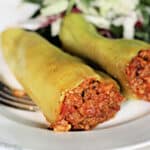