Spicy Thai Eggplant Stir Fry! Spice up your midweek meals with this simple dish made even quicker by using a Trader Joe's freezer item! Turn one little package into a hearty meal by adding just a few extra ingredients. 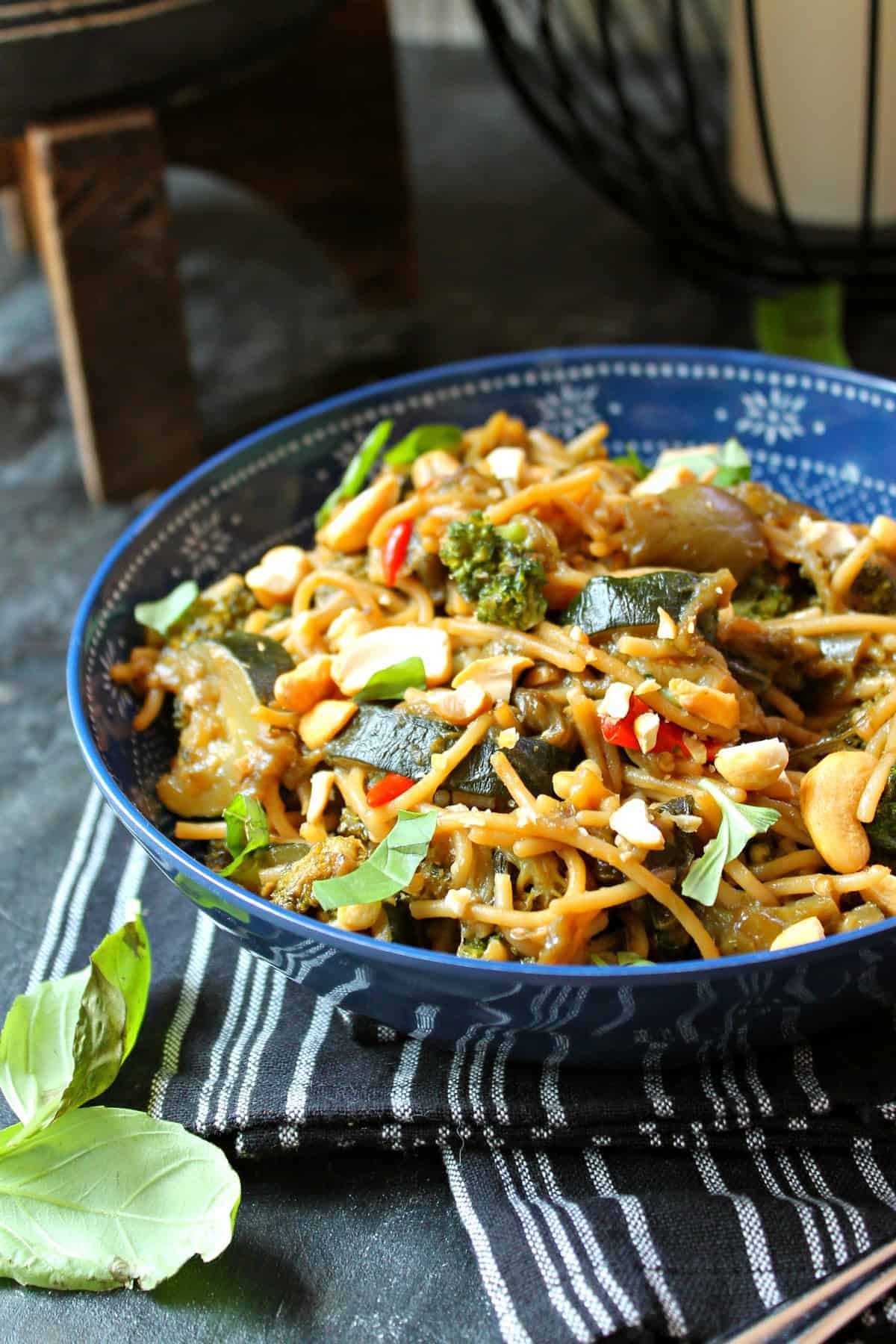 Happy Trader Joe's Tuesday! {I'm making it a thing, although I can totally hear Regina George saying, "Stop trying to make 'fetch' happen."} Last week, I shared my first recipe of the series, and showed how I often take a few simple ingredients from TJ's and turn them into a full-fledged meal for the family.

Today, I'm sharing a recipe that has become part of the weekly menu rotation -- Spicy Thai Eggplant Stir Fry. Using Trader Joe's Spicy Thai Eggplant with Thai Basil frozen meal as a foundation, I'm able to toss together a simple and fairly nutritious stir fry in minutes on even the longest of days.

You might be wondering why one would bother to add anything to one of the items that is sold as a stand-alone meal and not just zap that sucker in the microwave and call it a day. For us, it all boils down to serving size and nutritional value.

If you're not familiar with Trader Joe's Spicy Thai Eggplant frozen meal, let me tell you about this piquant powerhouse; it's a fairly simple dish made of green eggplant, Thai basil, soy sauce, and red chili peppers. Though the description on the package insinuates that it's mildly spicy, Steve and I have both agreed that it packs a fiery punch. {Meanwhile, I find that their "spicy, spicy" Zhoug Sauce lacks in the heat department, so I'm not sure who is in charge of rating the spiciness of their products!}

One thing that is doesn't pack, however, is heft. While there are supposedly 2 servings per package, I've found that unless you plan on adding on a side dish, it isn't enough to fill one hungry man... let alone a man and his {also hungry} wife. After buying it several times, I finally came up with a way to transform this dish into a meal for two that keeps everyone satisfied and also adds flavor and extra nutrition to the mix.

As I mentioned, the portion size of this meal is minimal, in our opinion, so here's what I add to bulk it up: 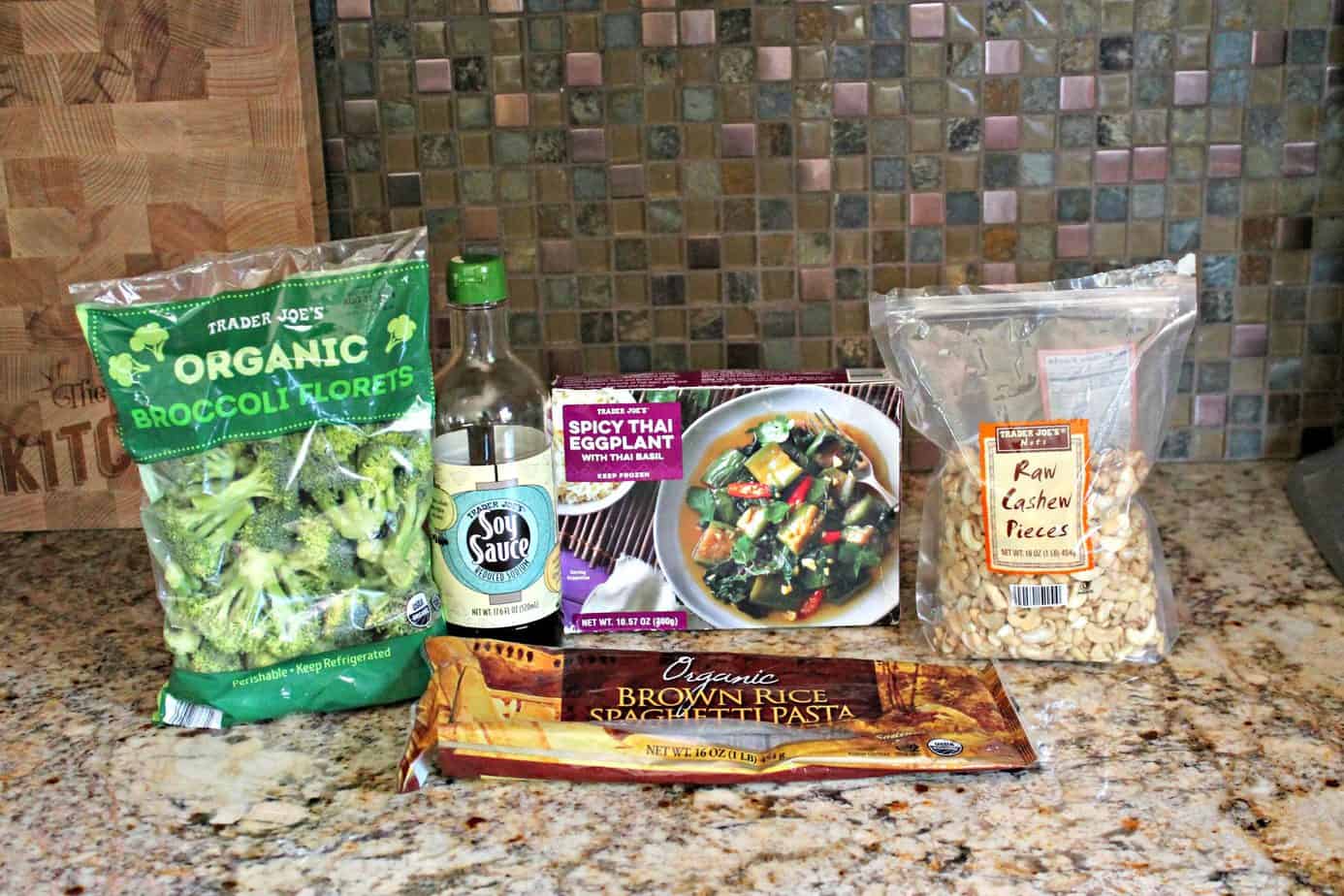 As far as alternatives go for those of you who don't have a TJ's close by, I'm not quite sure what to recommend in place of the Spicy Thai Eggplant. I'm sure you could cook up some fresh eggplant and toss in some chili peppers and it wouldn't be terribly difficult, but I can't say I've ever personally tried it. If you happen to give it whirl, please report back!

Admittedly, "semi-homemade cooking" is not exactly "on brand" for me, BUT, I know that many of us -- even those of us who strive to put home-cooked dinners on the table every night -- can use a helping hand from time to time {or all the time} when we're in a time crunch or are just plain exhausted. One of the reasons this particular frozen meal caught my eye was because the ingredients don't include a bajillion chemicals and weird things, which I appreciate.

The method I use to cook this is quite simple: I put the frozen block in a skillet with a few tablespoons of water, and let it thaw out. I then add the soy sauce to create a bit more sauciness, and then toss in the fresh veggies and let them simmer/steam until they're fork tender. Meanwhile, I make the brown rice pasta or rice noodles if I'm using those. {Pad thai noodles take just a few minutes to cook, which is nice if you're dealing with a hangry crowd.} Once they're cooked, I stir them into the eggplant and vegetable mixture. The starch from either type of noodles actually helps to thicken the sauce a bit, which I like. If it remains too watery, I crank up the heat and let it reduce until the right sauciness is achieved. 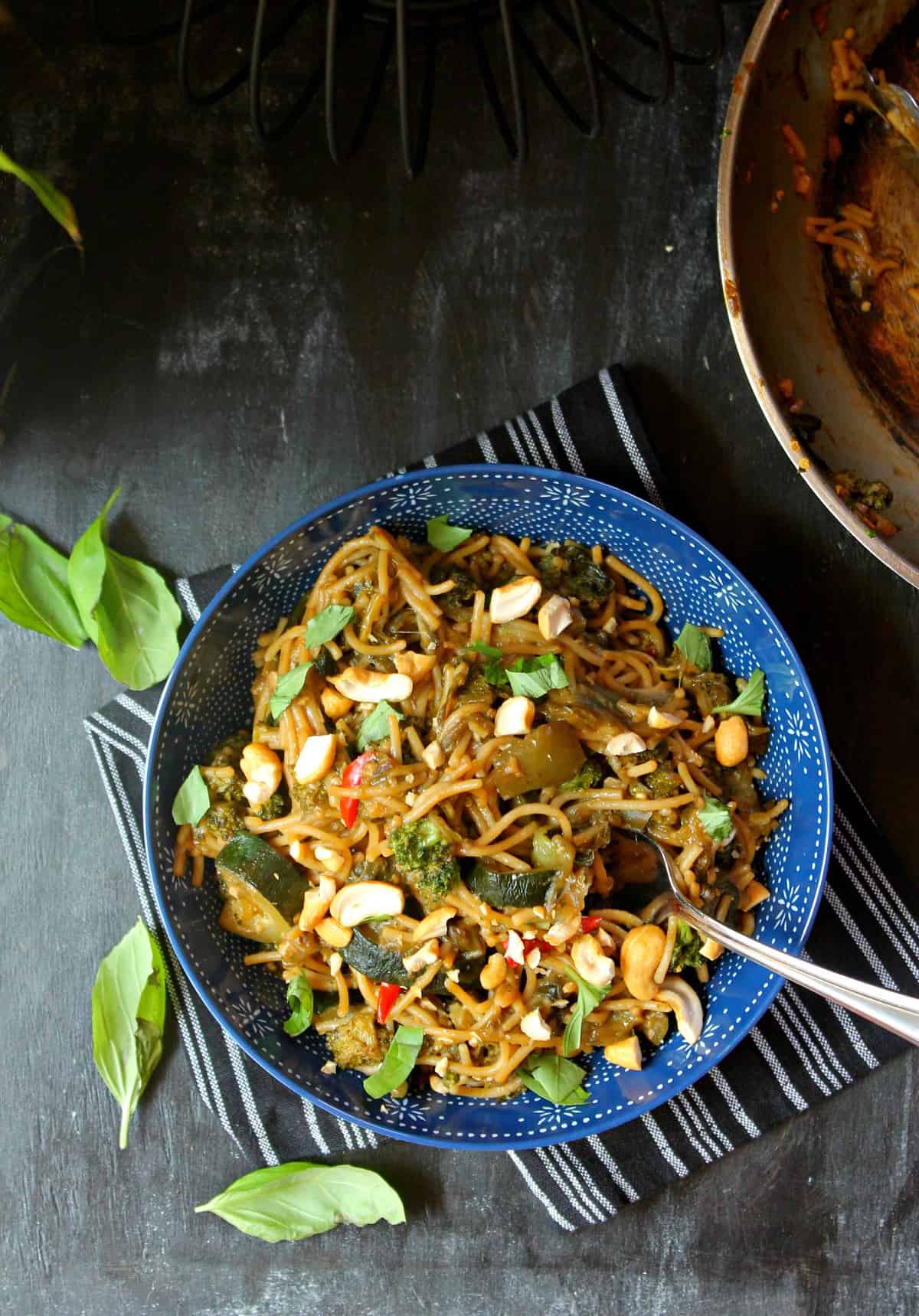 Right before serving, I add some chopped cashews and fresh basil and voila dinner is served. Doesn't get much easier. {Unless you don't add anything to the frozen meal and zap it in the microwave. Ha.}

Feel like you need some protein on your plate? This happens to go great with cooked shrimp {you can actually toss frozen or fresh shrimp in at the same time as the vegetables and cook them all together}, grilled chicken or pork, or even tofu. 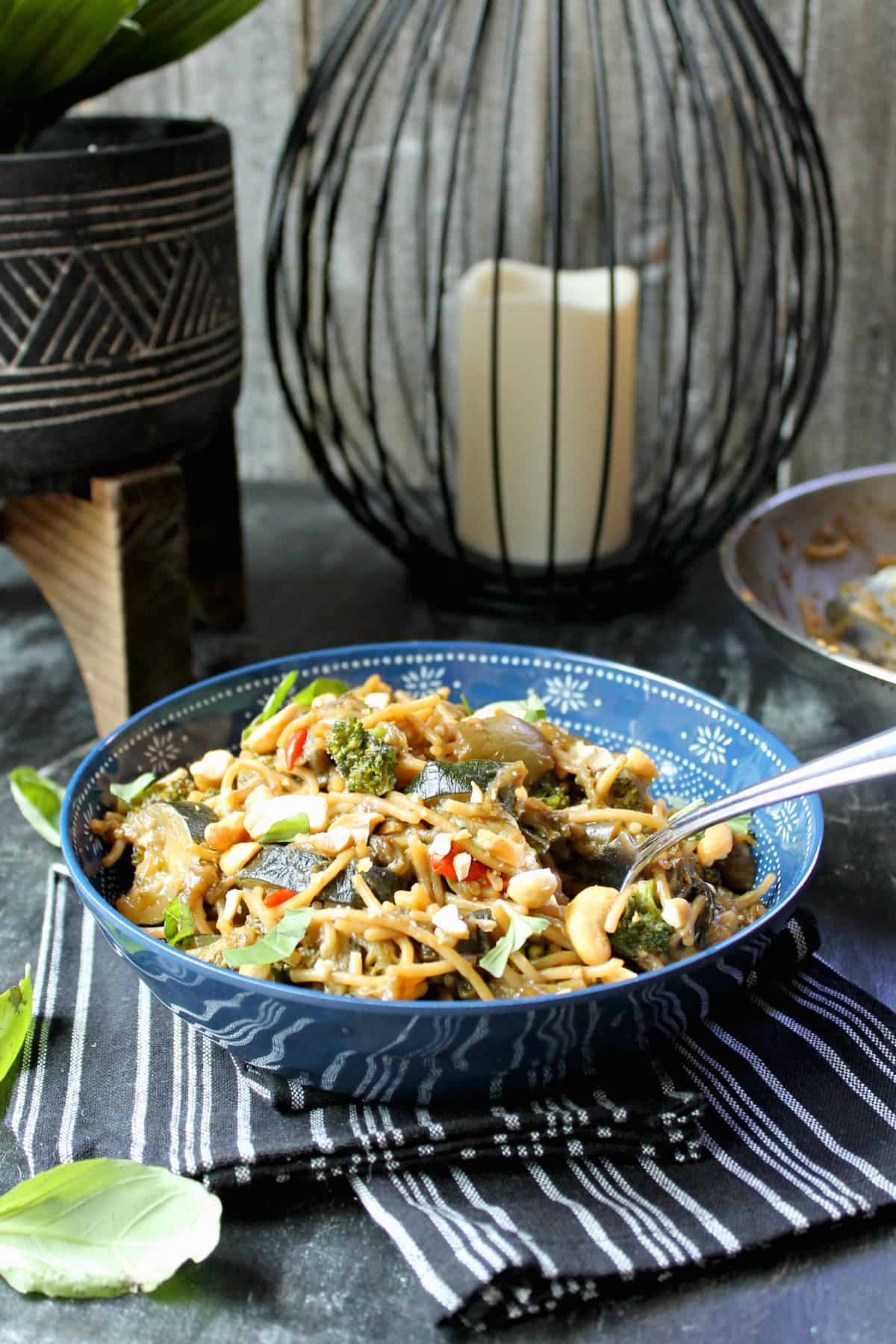 For next Trader Joe's Tuesday, I think I might do a completely "from scratch" recipe using their ingredients, but don't worry: I promise not to stray too far from the two words that keep you coming back for more of these -- quick and easy! 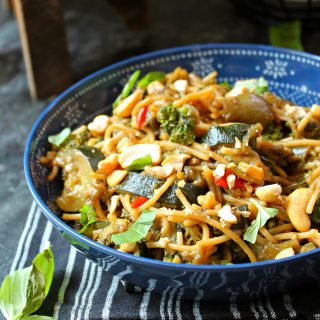 *This recipe is easy to double for a larger family. Simply add another package of frozen eggplant and increase the amount of spaghetti.
« Easy Skillet Gnocchi in Roasted Red Pepper Sauce
Apple Custard Bars »