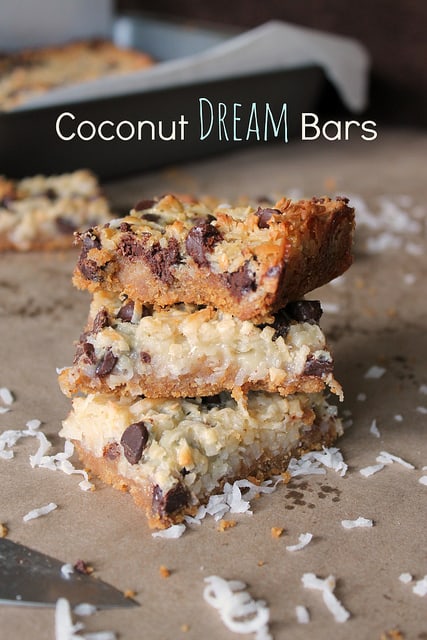 To get caught up on my travels {in order!}:

Remember when I first started my travel recap and I thought it would be a 5 part series? Yeah, well... I totally underestimated how much stuff I had eaten and seen and done on my visits to New York. It could be because every time I'm in the city I feel like the trip is over in the blink of an eye. Or maybe because NYC is so saturated with amazing foodie experiences.
Regardless, I have more to tell you about. And today we're getting really foodie!
Ok... food-loving friends. There is a wondrous place where all of your culinary daydreams can go run wild. And it's called Chelsea Market. 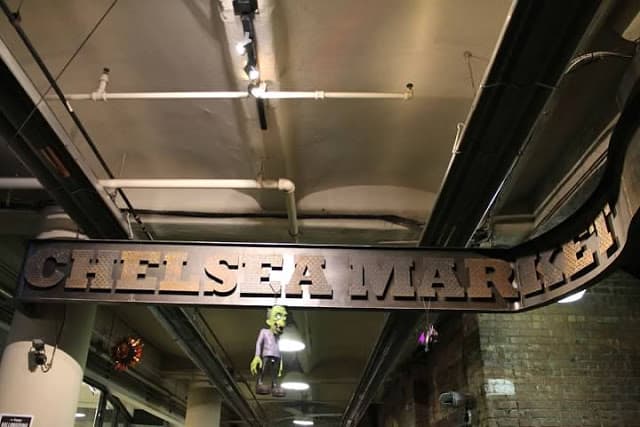 I LOVE Chelsea Market. I loved it so much that I almost had a mini-meltdown of happiness when I walked in. Steve was worried for a second that he might have to fan me to keep me from passing out into a little puddle of joy like the girls you see in those old clips of Beatles concerts. There's just SO much to see and taste!

Not only is CM filled with storefront after storefront of tasty delights, but it also has a really cool history that makes it all the more intriguing. {In short, it used to be an old factory.} The architectural details of the market make it engaging to walk around and browse, even if you're not hungry. {But seriously, how could you not be with all the yummy stuff going on in here??} Plus, Food Network's office is in here. Squeeeee!

Anyway, we got there around lunchtime and it was packed. We did a sweep of the place to check out our food options, then split up to grab a bite and were lucky enough to eventually snag a table right in front of Amy's Bread. So that's where I'll start the "tour". 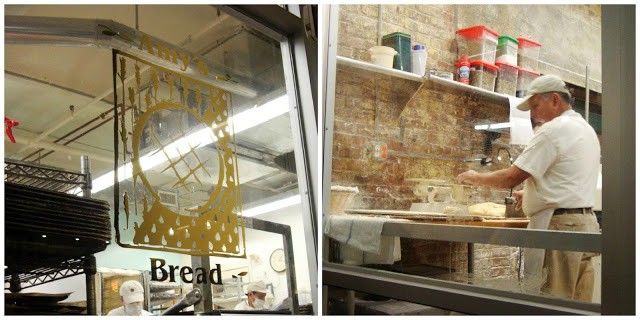 Our spot was perfect for lunchtime entertainment -- Amy's Bread has a large glass windows that lets you see the behind the scenes action of the bakery, and it was mesmerizing. I sure hope this fellow didn't feel uncomfortable with me gawking at him while I ate my sandwich!
I had read all about Amy's Bread when I was researching spots to visit, and the reviews had been nothing but flattering for this well-known NYC bakery. We did buy some bread {it was a funky-looking baguette}, but I have to say, I don't think we got it at the peak of freshness. There is crusty bread, yes, but then there is also "nearly rip your teeth out of your head" bread, and sadly, I don't think the bread we tried was worth removing a layer of skin from the roof of my mouth. I took a Coconut Dream Bar to go & hoped that maybe that would give me a better impression of Amy. {It did.} 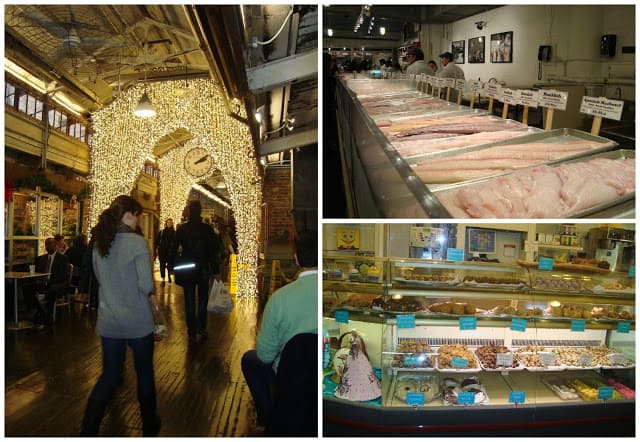 Next, we strolled along, making stops at Sarabeth's, Ruthy's, Eleni's, and Fat Witch, and I even convinced Steve to let me spend some time in the Bowery Kitchen Supply & Buon Italia, which are easy spots to get lost in for long periods of time if you have an affinity for the kitchen!

Like Central Park, Chelsea Market is another place that could take up hours of your day if you let it, but we had lots more to see so Steve pried me away we left to do some more site seeing.
﻿
We had been invited to check out Steve's buddy's band, Le Mood, who was playing at Spike Hill in Williamsburg that night. {If you watch Two Broke Girls, you know all about Williamsburg and it's hipstery vibe}. Before the show, we made plans to meet up with my very good friend, Lourdes, who happens to live in NYC {I've known her since Kindergarten!} & her boyfriend for dinner at a place called Sweetwater.  Between catching up with my friend and diving fork-first into their amazing food, I can't remember what I ate, nor do I have pictures to show you... but I guarantee, it was good!
﻿

After the show, a group of us headed over to a charismatic little bar/restaurant called Surf Bar, a spot I'd expect to find in South Florida, not in Brooklyn! {Those funny little hipsters, they do have a sense of humor.} This place had it's own striking personality... from its sandy "floor" to the surfboards hanging overhead, its checkered tablecloths & haphazardly decorated walls, Surf Bar is never a dull moment. {Heads up: I had a run-in with a cockroach the size of a matchbox racecar in the bathroom that was most definitely memorable!}

At the end of the night, Lourdes mentioned that she wouldn't mind giving us a little tour of some food spots the following day. And since there are few people I know who love food more than Lourdes, I happily accepted her offer! Be prepared to tag along on our whirlwind food tour in my next post... and to be amazed by how much food my husband can put away! 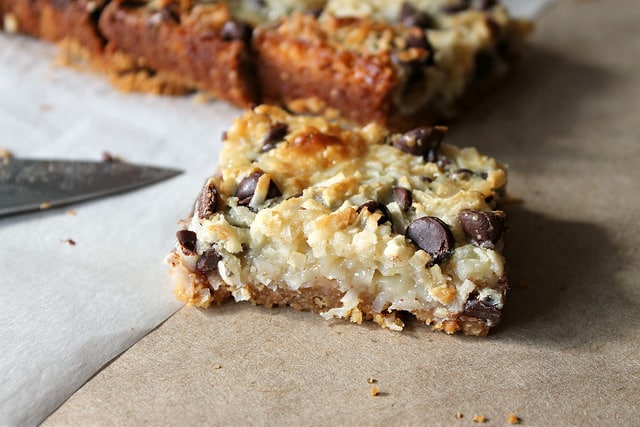 So, maybe we didn't have the very best first impression of Amy's Bread's namesake... but it was hard to find fault with these "Gooey Coconut Dream Bars" that I brought home for later. Also known as "Magic Bars" or "Hello Dollys", these layered dessert bars combine sweetened condensed milk, coconut, and chocolate on a buttery graham cracker crust. They're rich and satisfying and do have a magical way of eliciting a dreamy, "Hello!". 😉 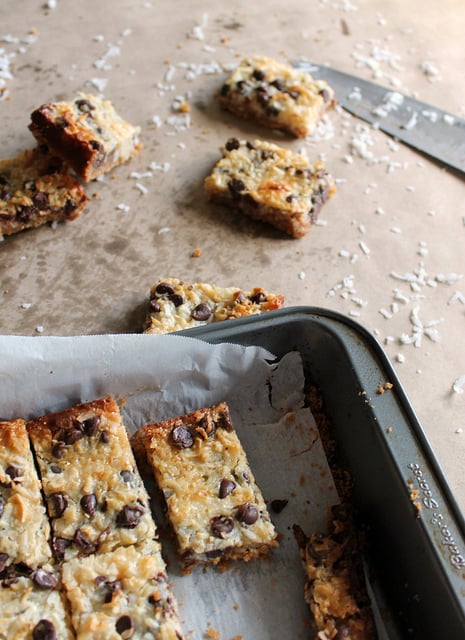 1. Preheat the oven to 350 degrees. Prepare a 9x13 inch baking pan by spraying with non-stick cooking spray {or buttering it}, lining it with a sheet of parchment paper with flaps hanging over the edge so the bars will be easy to remove once they're baked.

2. In a bowl, mix together the melted butter, graham cracker crumbs, and salt. Pour it into the bottom of your lined pan and press it to pack down the crust into an even layer.

3. In another bowl, mix together the chocolate chips and coconut, then sprinkle it over the crust evenly.

4. Pour the condensed milk over the top of the filling as evenly as possible. Bake it for 28-32 minutes. {Seriously, it's that easy.} Keep an eye on it to make sure it isn't browning too much or bubbling over. {Amy's recipe suggests turning it mid-way through the baking time to ensure an even browning.}

5. When it's done baking, remove from the oven and cool it completely. Then, using the nifty little overlapping flaps you created with the parchment paper, lift out the entire thing. {You may need to carefully go around the edges to loosen it from the pan.} Cut it into desired size bars.

Keep bars refrigerated if you're not serving right away, and bring to room temp to before eating. 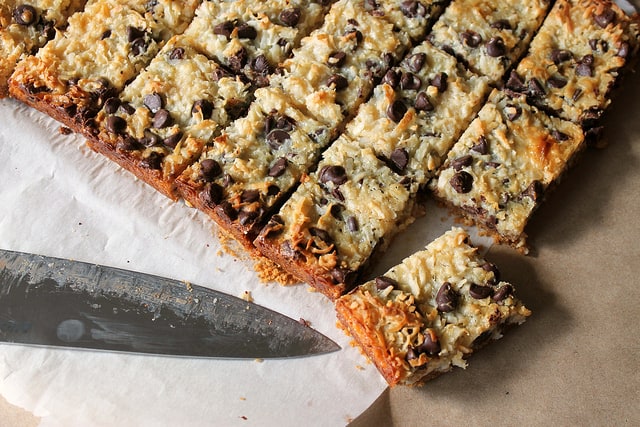