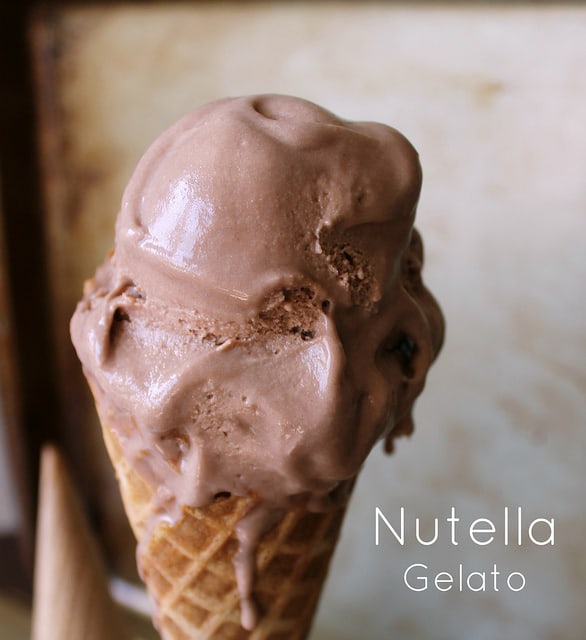 When I travel, I love to take note of the places to go and things to eat so I can come back and be a good recommendation resource for anyone who might be visiting the same place. I've done a few travel recaps for you guys from my trips to Key West {Parts 1 and 2}, and Chicago {Parts 1, 2, and Bakery Edition}, and while it certainly took me a while to put them together, I managed to get them posted in a reasonable amount of time.

And then I went to New York City. Like, 4 years ago {and then again twice at the end of last year}. And I was SO excited about it, and did SO much stuff, and was SO overwhelmed by the city {in a good way} that I never sat down to write about my experiences. {I did do a little photo essay type thing here, but that barely breaks the surface!}

Well, my friends, the time has come for me to finally tell you a bit about my adventures in NYC. We'll call this segment, Prep in the City. 🙂

But, before we go back to the end of last year {one of my best NYC trips yet}, we're going to rewind way, way back to 2009, when I took my very first foray into the Big Apple. Steve and I were visiting his family in Ossining, and planned to spend some time in the city during our stay. So, after a few days in Westchester, we ventured into The Bronx to check out a place that I could only describe as a mecca to his family: Arthur Avenue.

I had heard of this elusive food-lover's paradise for years from Steve's relatives {they lived in New York until the 70's when they moved down to South Florida}. Whenever they'd talk about it, they'd get this dreamy, distant look in their eyes... like they were being transported back to a time and place they were trying to recapture. Whenever they had the chance to visit, they would come back bearing plastic bags filled with gifts from this magical place: loaves of crusty artisan bread wrapped in butcher paper and tied with red and white striped bakers' twine, hunks of Parmgiano Reggiano the size of my head, and links of sweet and hot sausage with a smell so potent it could knock your socks off.

These gifts were highly treasured: They might as well have been blocks of gold excavated from King Tut's tomb.

Anyway, you can imagine how excited Steve and I both were to see this with our own eyes. What we found was definitely a site to behold.

Very quickly, I formed an opinion about this incredible place. Arthur Avenue is a beautiful assault to the senses: smells, tastes, textures, sights that take you back to a place in history where food was a craft that took time and patience and know-how. They do things old school. They are legit. There's no showboating, glossy exteriors, or false facade -- what you see is what you get. And that's exactly what makes Arthur Avenue, Arthur Avenue.
{Steve's little cousin wasn't as charmed as we were by all this... she held her nose pretty much the entire time we were there. I don't know how the kid didn't asphyxiate herself. I'm not gonna lie, though, that pork store was pretty stinky.}

This spot, Addeo's Bakery, was much more our speed!
So, armed with an understanding of why Arthur Avenue is referred to as "the REAL Little Italy" {and about $100 worth of bread, cheese, and cured meats}, we went along our merry way and continued our New York adventure. {But not before stuffing our faces, of course.} 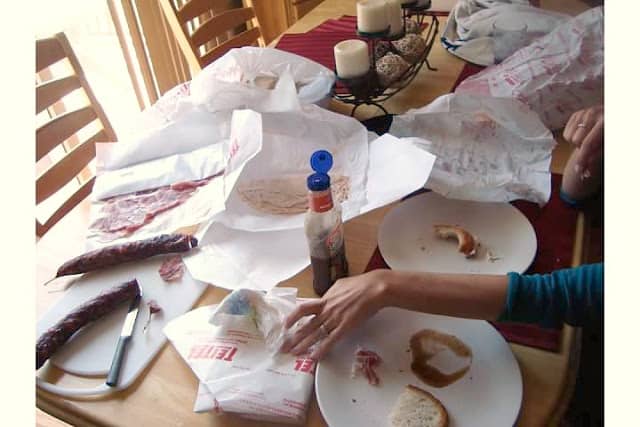 Feasting.
The next day, we took a train into the city to meet up with some friends. The plan was to spend the day exploring while everyone was at work, then enjoy an evening out, and possibly gain a tour guide to help us see the sights the following day. Luckily, our friends were ready for us and took us to a great spot for a Korean barbecue lunch.

Now, this was pre-foodie/blogger days, so these are the only two pictures I have. And I don't know the name of the restaurant. I also have no idea what we ate. My, my... how times have changed! What I do know is that I was completely enamoured with the experience. The little dishes of sauces, the "barbecue pit" in the middle of the table, the way the food just kept on coming... and eventually covered then entire table. It was magical.

Granted, I had no clue what I was putting in my mouth at the time. Soon after I discovered that this was where I had my first taste of kimchi {which, since then, has become a wildly popular condiment} and my first experience with haemul pajeon. {"Is that a tentacle in my pancake??"} One thing was certain, if Arthur Avenue hadn't already done it, this sealed the deal: I was in love with New York City.
With full bellies and our curiosity piqued, we parted with our friends and decided to take on the city, tourist style. To say 'we walked' is a gross understatement. Steve and I, and our friend Ryan who was also visiting that weekend, covered an immense amount of ground in just a handful of hours. We saw Times Square. The Statue of Liberty {from Battery Park}. Wall Street. We payed our respects at Ground Zero. Saw the Empire State Building {though we didn't go up to the top}. An artsy little underground market heaven knows where. We navigated the subways {inefficiently, but still}. Walked Chinatown. And finally, made it to the "other" Little Italy. 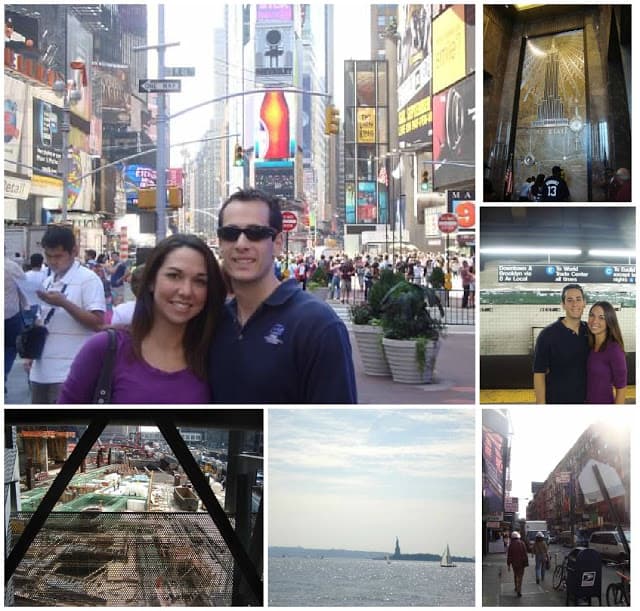 This, dear friends, is where I had the absolute best gelato of my entire existence. I don't know if it was the exhaustion that made it taste so good. Or the fact that I was love-drunk with the city. Or the copious amounts of Nutella that swirled throughout the sweet, creamy treat. Right there, standing in the middle of Mulberry Street, I took a little bite of heaven. {And it came from Ferrara Bakery.}

Steve literally asked me if I was ok because, for the duration of my gelato experience, I didn't speak one word. Which is rare for me, y'all.
I am still amazed when I think back to how many miles we must have trekked that day.
As spent as we were, there was no way were were going to get away with laying low for the night. Nope, not with our friends. They were raring to go and ready to show us a good time. And they definitely followed through with their plans.

We arrived at McSorley's Ale House, and I wondered what in the world they were thinking. When I pictured "going out" in NYC, I envisioned swanky lounges and sleek bars. McSorely's was the polar opposite. But, never being opposed to new experience and a good bar {which is more my style than a pulsing night club, anyway}, I willingly went along for the ride and, as a result, has one of the most entertaining evenings of my life.

McSorley's is the oldest continuously run bar in New York City. Within its walls is one big, drunken history lesson. When we visited, there was a layer of dust about 3 inches thick covering just about ever surface that was out of arms reach. Dust that had been accumulating since its opening in 1854. The walls were plastered with historic memorabilia, the floors sprinkled with sawdust, and the tables full of patrons sipping light or dark beer {that's all they serve, folks} out of miniature beer mugs. {Since then, McSorley's was bullied into "cleaning" up, which oddly made me very sad.} P.S. Please do yourself a favor and read their History Page & Timeline.

Anyway, I could go on about this place because there truly is so much to talk about, but I will suffice it to say that what transpired that night was something out of a movie: a drinking game that had each of us doubled over in side-splitting laughter various times throughout the night, "challenges" that consisted of cramming McSorley's famous saltine cracker appetizer into one's mouth in record time, and an impromptu performance of The Star Spangled Banner that roused the entire bar to its feet.
I can't tell you too much about the rest of the night... there were lots of laughs, a stop at a hipstery lounge {pre-hipster mania}, and some late night ramen. I can tell you that the next morning was rough. And that were were awakened bright and early and informed that we were heading to The Hamptons.
Wait... what???
TO BE CONTINUED... 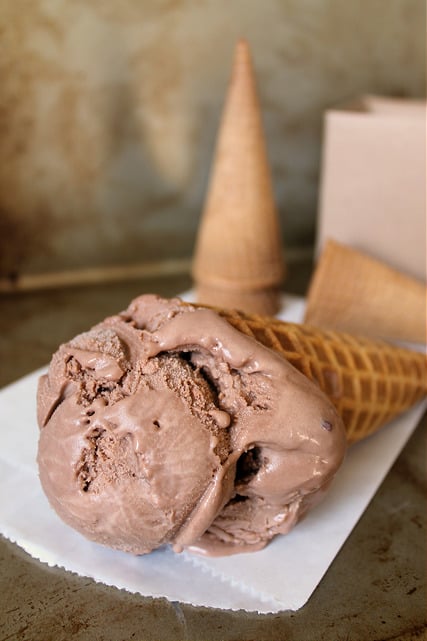 Until we pick up where we left off, here's a recipe for Nutella Gelato, inspired by my delicious snack in Little Italy. I can't say it's as good as the one I had from Ferrara, but as far as I'm concerned, you just can't go wrong when the words "Nutella" and "Gelato" are uttered anywhere near each other. I think you'll agree. 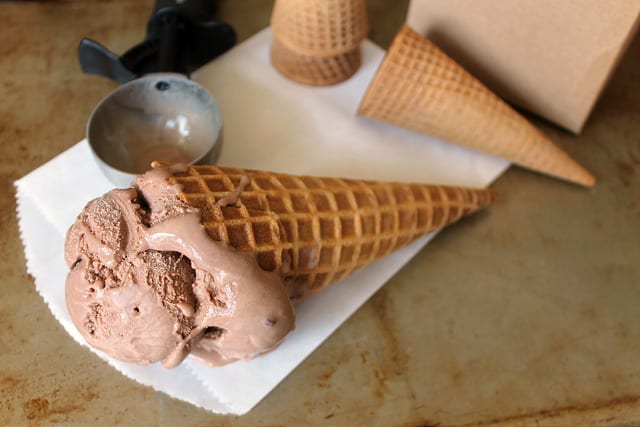 1. Mix cream, milk, and ½ cup of sugar together in a saucepan and warm over medium heat until the sugar is dissolved, about 5 minutes.

2. Meanwhile,  add ¼ cup of sugar to the egg yolks. Using a hand held mixer, beat the sugar & yolks until it's thick and pale yellow. It'll take about 5 minutes. You can do this in a medium bowl or whip it {whip it good! ha!} in the bowl of a stand mixer fitted with the whisk attachment if you're feeling lazy.

3. Stream about a half cup of the warm milk mixture into the eggs, whisking the whole time. Add the entire milk/egg mixture back into the saucepan. Continuing to whisk often, cook it on medium-low heat for about 8 to 10 minutes, or until it's thickened. {You should be able to coat the back of a wooden spoon, draw a line down the middle with your finger and have the line stay visible. Careful not to make scrambled egg custard!}

4. Combine the Nutella and vanilla extract in a medium bowl and pour the warm mixure into the bowl, whisking together until it's uniform and well-mixed.

5. Refrigerate the mixture for a few  hours to cool it down. If you're in a rush, you can speed up the process by placing the bowl with the custard over another bowl filled with ice and a little water {an ice bath}, and whisking it in there for a while, but honestly, it's kind of a pain.

6. When the mixture is cooled, pour it into the canister of an ice cream maker and follow the manufacturer's instructions. Churn it until it's a soft serve consistency, then transfer it into a freezer safe container {if you haven't eaten it all at this point}, and freeze to achieve a scoopable consistency. 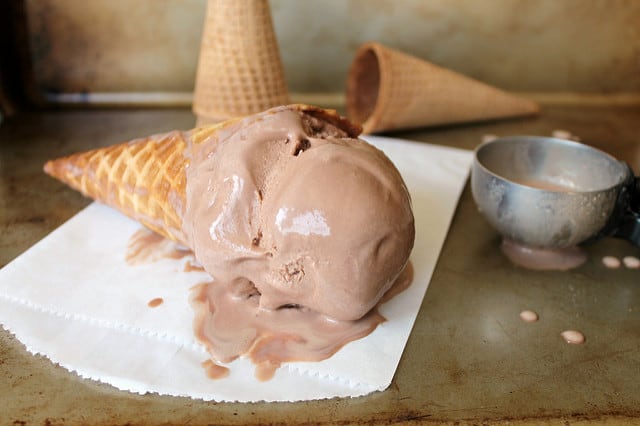