Is it weird that I missed you guys this weekend? Because I totally did. Even though I was having tons of fun gallivanting around Chicago and gorging myself with cupcakes taking in the sites.

But I am super excited to recount my {foodie} tales of the Windy City so you can feel like you were there, too, because if you haven’t been before, you’ll definitely want to add it to your list of places to see.

My first visit to Chicago was 7 years ago. My college roommate, Emily, moved there after graduation and had been living there for a whopping 4 months before my other roommate and I decided to bombard her for a weekend.

Except, we chose January {of all months} to take our little trip. Frigid, snowy January.

Aside from the fact that I literally had to wear 6 layers of my Floridian clothing to equal 1 layer of Chicagoan clothing, we managed to have as much fun as a bunch of 23 year olds could in a city that they knew nearly nothing about.

Seven years later, and long overdue for a visit, I hopped a plane to see {a now well-versed in city living} Emily. Luckily, I thought it through and returned during the summer this time. I’ve got to tell you, Chicago weather is into extremes… it’s hotter there than it is in Florida at the moment. But ‘hot’, my wardrobe can handle. Especially if there is the promise of sampling some of the city’s best bites.

My first night in town, we headed out to Public House to grab pre-dinner drinks to celebrate Emily’s friend’s 30th birthday. The Friday evening happy hour crowd was still lingering making for a busy, crowded, and energetic atmosphere. With their extensive beer selection {over 103 types!}, taps built into the tables, and a slew of flat screens tuned in to the sports event du jour, Public House knows how to draw a fun crowd.

Next, we made our way to Sunda, a high end “new Asian” restaurant, for dinner. Sunda is what I expect for the city: Packed, trendy, loud. The menu featured some exotic sushi rolls {but not “I’m-not-so-sure-about-that” crazy} as well as some fancy entrees, cocktails, and dim sum. I went with Miso Soup and a Sweet Potato Caterpillar Roll. The presentation was beautiful, but I have to admit, I wasn’t that impressed by the taste. 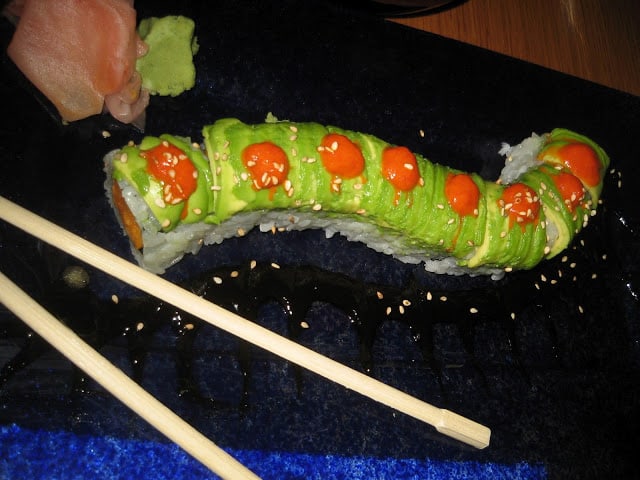 Sunda seems like the place to go to see and be seen {just check out their News page for a list of celebrity sightings}, and it definitely has atmosphere appeal. {I have to say, what really stuck out to me was the excellent service we received from our fabulous waitress. She handled the large crowd expertly and cheerfully, and made sure to highlight menu favorites, even though she had to literally yell above the background noise.}

We were up bright and early on Saturday to grab breakfast at a cute little diner called Stella’s. The decor was retro-fun, and the patrons looked right at home, like it was second nature to start the weekend in Stella’s cozy booths. The service was friendly, the food was standard – though generous – diner fare {I had hash browns & scrambled eggs even though I was dying to try the Challah French Toast with Strawberries and Creme} for great prices. Though my meal was nothing to write home about, there was something about Stella’s that would make me want to visit again. {Sadly, no pics. You’ll just have to use your imagination.}

With our tummies full, we were ready to take on the day. Emily decided a good way to see the city would be to take a Wendella Boat Architectural Tour, and I have to say it was a fantastic way to see the sights and learn the history behind many landmark buildings that make up the Chicago skyline. The tour starts on the Chicago River and makes it’s way through the Chicago Lock to Lake Michigan and back, packing every second with tons of fun facts, city history, and picturesque views.

When our tour was over, we hit a few stores on Michigan Avenue to wait out the downpour that had started outside. {And here I thought I escaped Florida’s afternoon showers.} Once it cleared up and we could shop no more, we headed home to get ready for another night out.

Tomorrow, I’ll be sharing a few more of our stops that evening, including a bar that young singles wouldn’t want to miss and a “piggy” cocktail treat… and then a detailed post on hitting Chicago’s cupcake motherlode.

Have you ever been to Chicago? What were some of your favorite sites and bites?