Yesterday, I recapped my first 24 hours in Chicago. And a fun-filled 24 hours it was.

My second evening in Chicago, the girls had planned to try out a place called Benchmark for dinner. We arrived to find that it was pretty much packed wall-to-wall with 20-somethings that looked like they stepped out of an Abercrombie ad. {Not that I – a happily married woman – was looking or anything… but it was sort of hard not to notice.} The guy to girl ratio was way tilted in favor of the bachelorettes I happened to be dining with, so crowd watching was definitely entertaining. 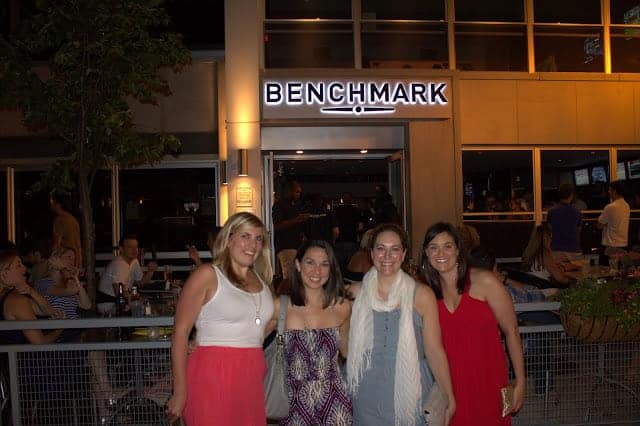 When we finally managed to snag a table, we settled in and grabbed some drinks. Looking around, it was easy to see why the place was popular with it’s open air seating {they have a retractable roof, which I imagine comes in handy during the blizzardy wintertime}and bustling bar scene. The Blackened Shrimp Wrap with orange, mango, & Asian pear and Sriracha-Citrus Vinaigrette I picked out for dinner was super flavorful {and I was semi-obsessed with the Sweet Potato Fries} and it went perfectly with the refreshing Summer Shandy I had to drink. Two thumbs up for Benchmark… one for the food & drinks, and one for the “scenery”. 😉

After dinner, we wandered over to Old Town Social, a dimly lit restaurant and bar with tons of character. As I browsed the drink menu by candlelight, I could tell that they take their handcrafted cocktails and housemade cured meats seriously. {Um, take for example, the “Piggy Back”… a shot of Maker’s Mark with a Bacon Consomme Back} I was sort of smitten with the brick walls, antique-ish decor, and how they managed to make the large space so cozy and comfortable. Definitely a place I’d want to visit again.

We were on a roll with picking fun spots, so we headed back towards Emily’s neighborhood and stopped in at Galway Bay for a game of darts or two. Despite seeming like a hidden basement bar, I was surprised to find that it was buzzing with activity and full of young people. {Am I just used to going out in South Florida where the majority of the patrons are of Social Security check-receiving age??}

Exhausted from all the fun, we called it a night and headed to bed since we had all of Sunday ahead of us.

The next morning, Emily took me to see the Wicker Park area, and we had brunch at a place called Feast. As much as we wanted to sit outside in the adorable patio area, we stuck with indoor seating since the temperatures were still on the warmer side. Luckily, the inside is just as charming as the outside, and we settled in to a corner booth in the back and enjoyed the air conditioning. 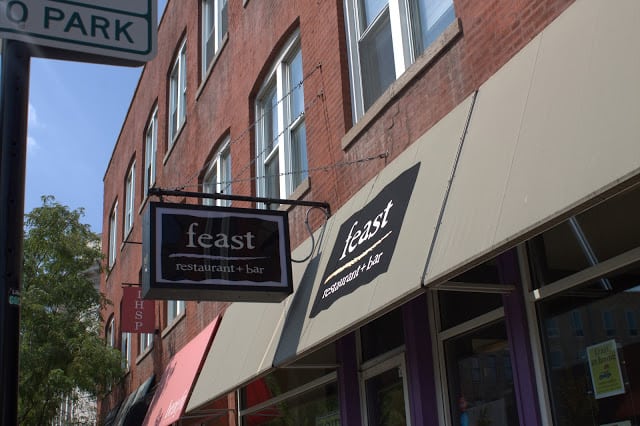 I ordered the Breakfast Croissant {egg, mozzarella, roasted tomatoes, prosciutto, and arugula on a buttery croissant} and it. was. awesome. So were the crispy “feast potatoes” that came alongside them. While I was most definitely satisfied with my meal {I actually only ate half & saved the rest for the next day’s plane ride home}, I couldn’t help but eye the stack of blueberry oatmeal pancakes on our neighbor’s table and wonder if they were as delicious as they looked. Stuffed, we headed out to get our Sunday started.

{P.S. I did a TERRIBLE job taking food pics on this trip! I was just to eager to dive in, I guess!}

A few hours later, I was a little sorry I had taken Feast’s name so literally, because as it turns out, I was about to embark on a foodie fantasy: A bakery tour of Chicago, hosted by Emily’s good friend Alli. {P.S. Check out Alli’s blog, Fetes, Food, & Fashion where she talks about… well… all three of those things!}

As fabulous as all of my meals had been during my trip so far, things were about to get taken up a notch and I was totally up for the challenge!

So… tomorrow, be prepared to drool a little bit as I share Chicago’s sweetest stops. And, don’t you worry, I definitely took some pics of all the goodies for you!