Remember a while back when I mentioned that my taste buds tend to trend with the season? Well, today's recipe is a perfect example of that. Bright, citrusy flavors, fresh fish, light flavorful slaw... can we say sunshine on a plate?

Unlike yesterday's dinner {which was worth every single semi-fussy step & dirty dish}, Tuna with Citrus Gremolata sounds kinda fancy but is really pretty simple.

The ingredients are simple & cheap and most of the directions are along the lines of "chop & toss into a bowl". {Who doesn't love that?}

You will need that zester again, but if you don't already have one, I urge you to go out and buy one anyway because it's quickly making it's way onto my list of favorite kitchen tools.{Watch your back, citrus press!}

The Rainbow Kale slaw that I served alongside the fish is just another way for me to incorporate some of the less "go-to" veggies that should get more recognition.

Lately, I've been hearing a lot more about kale's nutritional fabulousness, and I'm excited about that because it makes it easier to find more creative recipes that incorporate it.

(As a side note, the original recipe from Whole Foods includes a red bell pepper, which I omitted because I nearly passed out when I saw the '$4.99 for 1' price tag at the grocery store. I think my rainbow will just have to lack in the red department for today, thankyouverymuch. However, if you're willing to shell out some extra dough {or find a yummy looking bell pepper at your local farmer's market that won't break the bank}, then by all means go for it.)

Ok, enough of the chatter. Here's the good stuff! 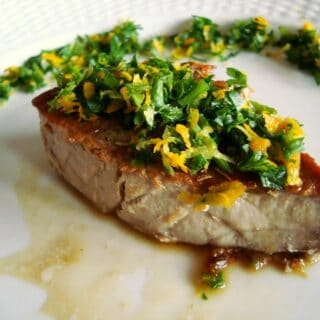