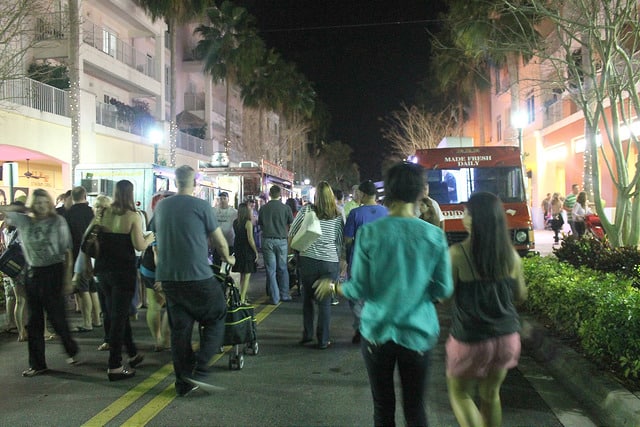 I live in a quaint little area in South Florida. I love so many things about living here. The weather. The proximity to the beach. The laid back vibe. Heck, it was even named one of America's Happiest Seaside Towns by Coastal Living.

Yes, delicious, fresh food {especially seafood} abounds in this coastal town, it's true. But, I never really stopped to think about the fact that this area is a bit "sleepy", culinarily speaking, until I began to travel to big cities.

City life just has a way of doing the food scene well.

Sure, I live about an hour drive from Miami... but truth be told, it takes a lot of prodding to get me to spend time there of my own will. {The traffic alone. Ugh.}

So, that leaves me with my little corner of the world. And visits to the same restaurants over and over again.*

Enter the Food Truck Invasion. Odds are that where you live, the food truck thing is SO yesterday. {When reality shows are made about something, it's likely that something has been done.} But like I said, it takes a little longer for things to make their way to us and take hold, so I was giddy at the prospect of having the Food Trucks invade our tiny Town Center.

The husband, the pup & I, picnic blanket in hand, wandered over to the "Invasion" fashionably late {I wanted to be there early but we had to close the office & feed Farley first!} to find that the lines had already started to snake around Main Street, which was lined with over 20 + food trucks. The cuisines ranged from the classic burgers and fries, to BBQ, to seafood, to a mobile self-serve frozen yogurt truck.

Overwhelmed doesn't even begin to explain the feeling of being famished hungry and trying to navigate the truck-laden terrain. So, we did what made sense at the moment: Picked up some beers and started the task at hand.

If I could sum up the experience of a food truck rally in one phrase, it would be, "Hurry up and WAIT.", which is understandable considering that most of them were manned by a maximum of 3 people serving made to order meals to throngs of hungry patrons. 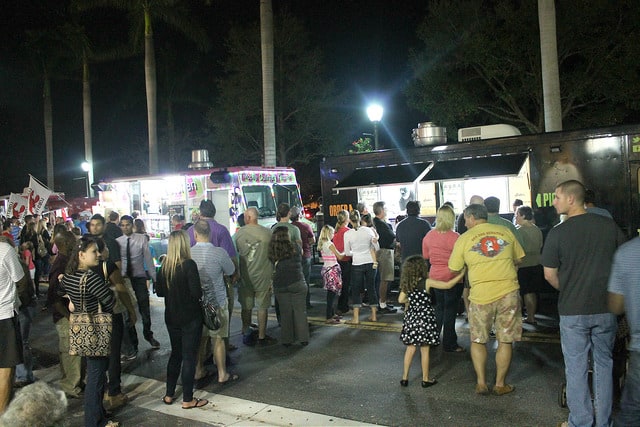 Steve and I quickly developed a system once we set up our picnic blanket on the grass near friends who had already made their rounds: Scout the trucks, make a selection, split up, order & meet back in the middle. Even with our organized approach, we only got to sample the fare from 3 trucks. 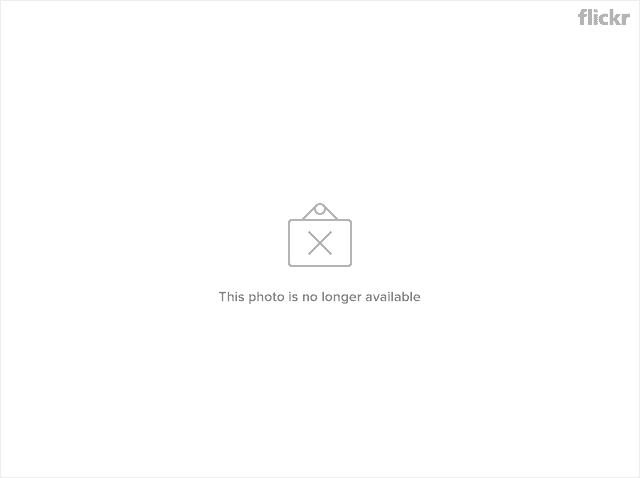 Our spring rolls from Spring In, Roll Out were crunchy & flavorful {albeit a bit burnt} and were probably one of the best buys I saw at 4 rolls for $5.50, so we got two orders {one turkey, one pork} in case we weren't able to get to the front of any other line the whole night. They came with sides of sweet & spicy dipping sauces that added a little zip to the already tasty bites.The truck had run out of the summer rolls I wanted to try, but I think I'd like those even better as I prefer fresh flavors over fried. 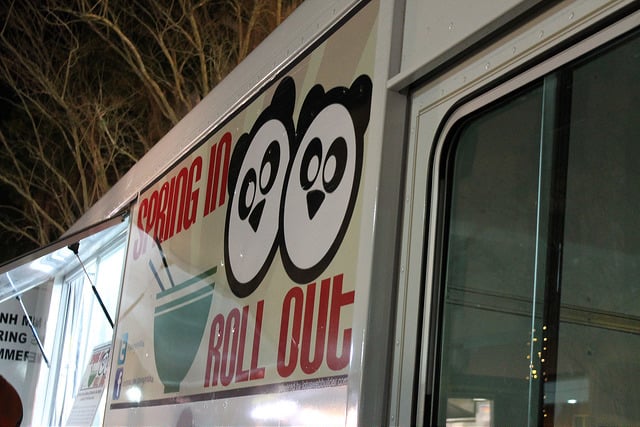 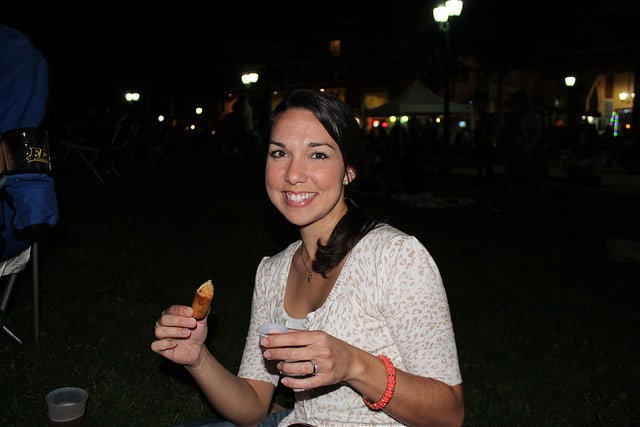 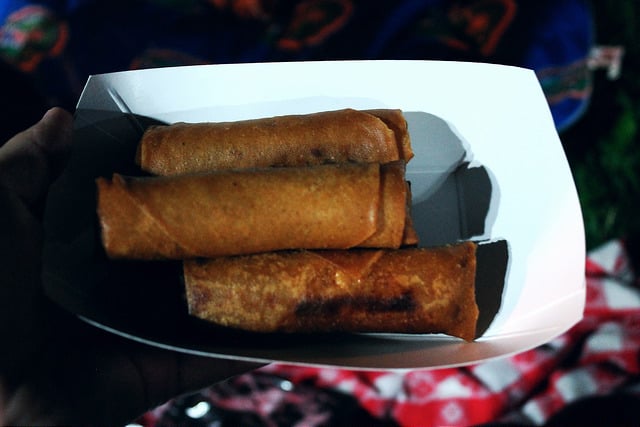 We also got to sample the Pork Bao from International Classic Cuisines {again, one of the last things they had available once we got to them}, which Steve really enjoyed {I literally only had one bite, but they were good}. They were basically a piece of sweet glazed pork tucked into a fluffy "bun" {which Steve kept on looking at incredulously saying they were like a super fluffy pancakes. Haha.} with sprigs of cilantro. One order came in at $9 for 4 buns.

Finally, we had to attempt my favorite round: Dessert! My friends and I walked over to Dolce Gourmet Cupcakes to see if the lines had subsided since our last run. But to our dismay, they were still long and winding. So we sampled a tiny taste of Joji Frozen Yogurt instead. A while later, Steve showed up to our picnic area with a big cup of Joji's "Hazetella" for me! {Does he know me, or what?!} I enjoyed the Nutella-flavored fro-yo, but he wasn't a fan of his pick {Orchid Vanilla Almond} due to the texture. It was a little hard and grainy as if it had been overprocessed. Maybe we hit the dessert trucks a little too late. 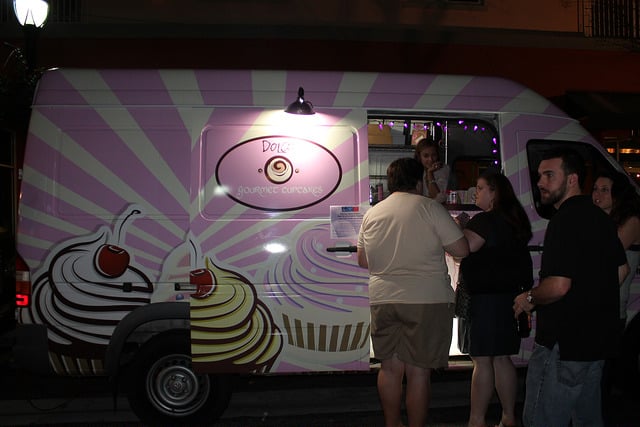 There were so many other trucks that had interesting offerings that I was curious about. The tacos from BC Tacos looked like something both Steve & I would enjoy. I heard great things about the burgers with truffle oil at Bite Gastrotruck, was amused by the clever "Pulled Pork Parfait" {check out what it looked like on Sloane's post over at Life Food and Beer!}  from Big Mike's BBQ, and definitely wanted to check out Best French Fries {BFF} where you can get white potato, sweet potato, and yucca fries either baked or fried with a choice of over 25 gourmet dipping sauces! 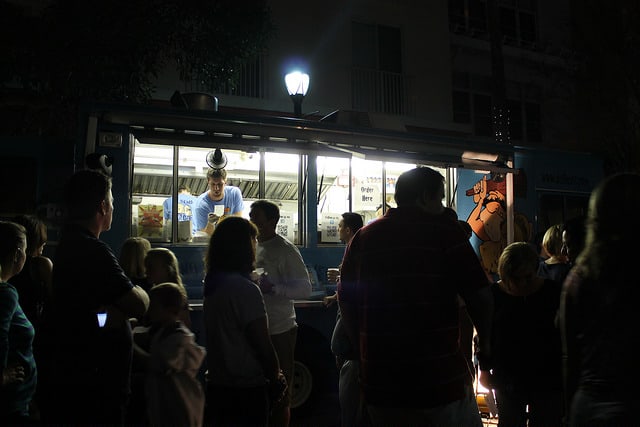 Luckily, the Food Truck Invasion will be a monthly occurrence this year, so I'm looking forward to seeing how they improve upon the inagural experience and am hoping to come armed with a game plan next month so that I can nab a taste of some of the other goodies I spotted!

*Thinking of visiting Jupiter, Florida? There are actually some fantastic eats in our area. Keep an eye out for a post coming very soon highlighting some local favorites!