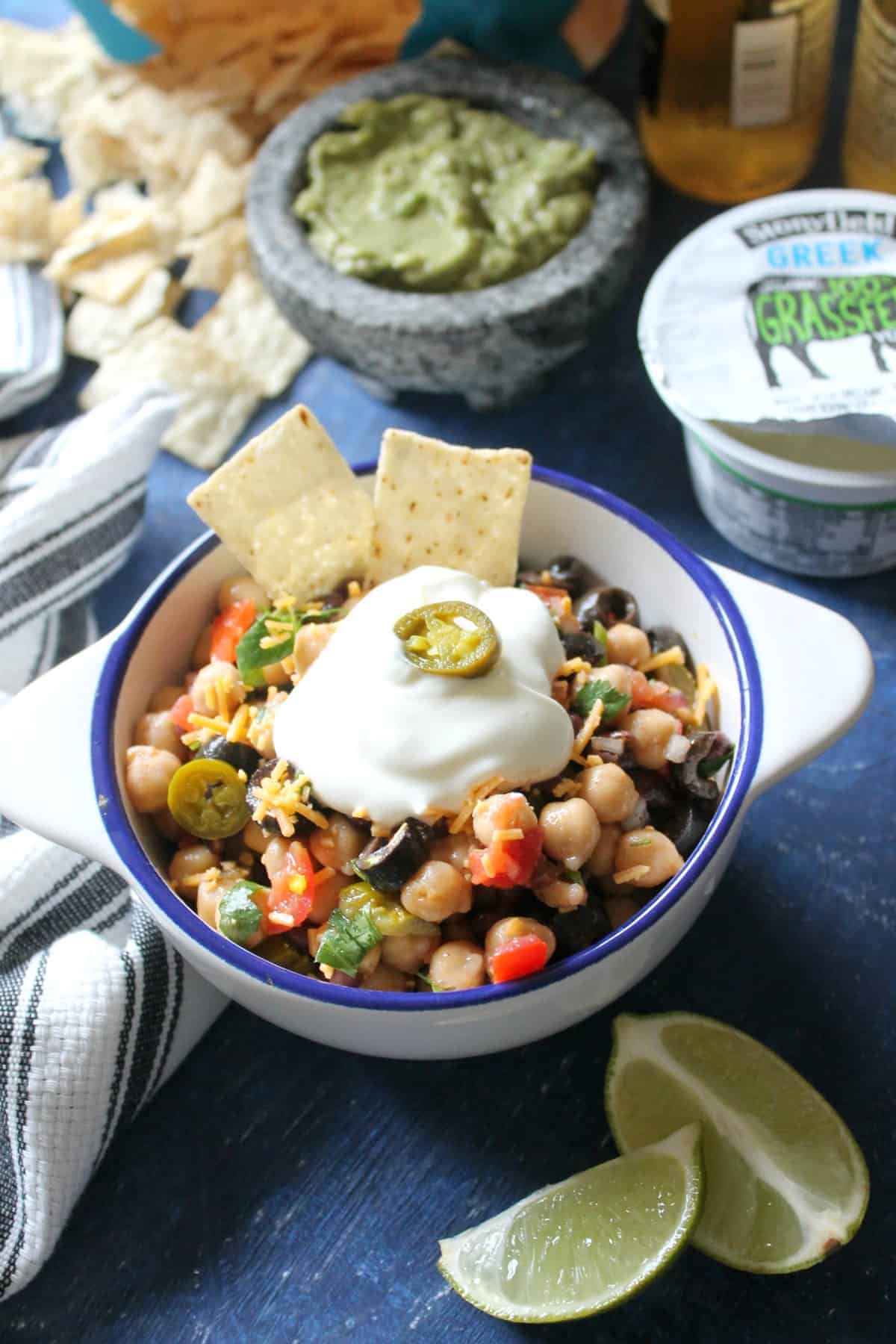 Disclosure:  This post is sponsored by Stonyfield Organic as part of an ongoing partnership. As always, the opinions here are all my own!

With all the cooking I do for the blog and my family, I feel like I rarely come across new things anymore in my weekly trips to the grocery store. I load Cole up the shopping cart, walk through those automatic doors and let the autopilot setting take over.

But a few weeks ago, somewhere between "applesauce pouches ::hang a right:: hummus", I saw something out of the corner of my eye that I had never noticed before. Balela.

The package described it as, "A savory Middle Eastern salad with chickpeas, black beans and tomatoes." It sounded good to me, so I threw it in my cart and moved on to "Eggs. Half & half. ::turn left into aisle 2::

I wasn't expecting much when I opened it up at home and tried it for the first time, but after a few bites I was hooked. I love the chunky texture of the whole beans and juicy tomatoes and the flavorful mix of onions and fresh parsley. I've been eating it on top of everything.

It's no wonder that when I was mulling over recipe ideas for playoff season, thoughts of this dreamy bean salad popped into my mind. As delightful as the traditional recipe is, I wanted to give it a game day twist and, well, does anything scream "game day" more than NACHOS? 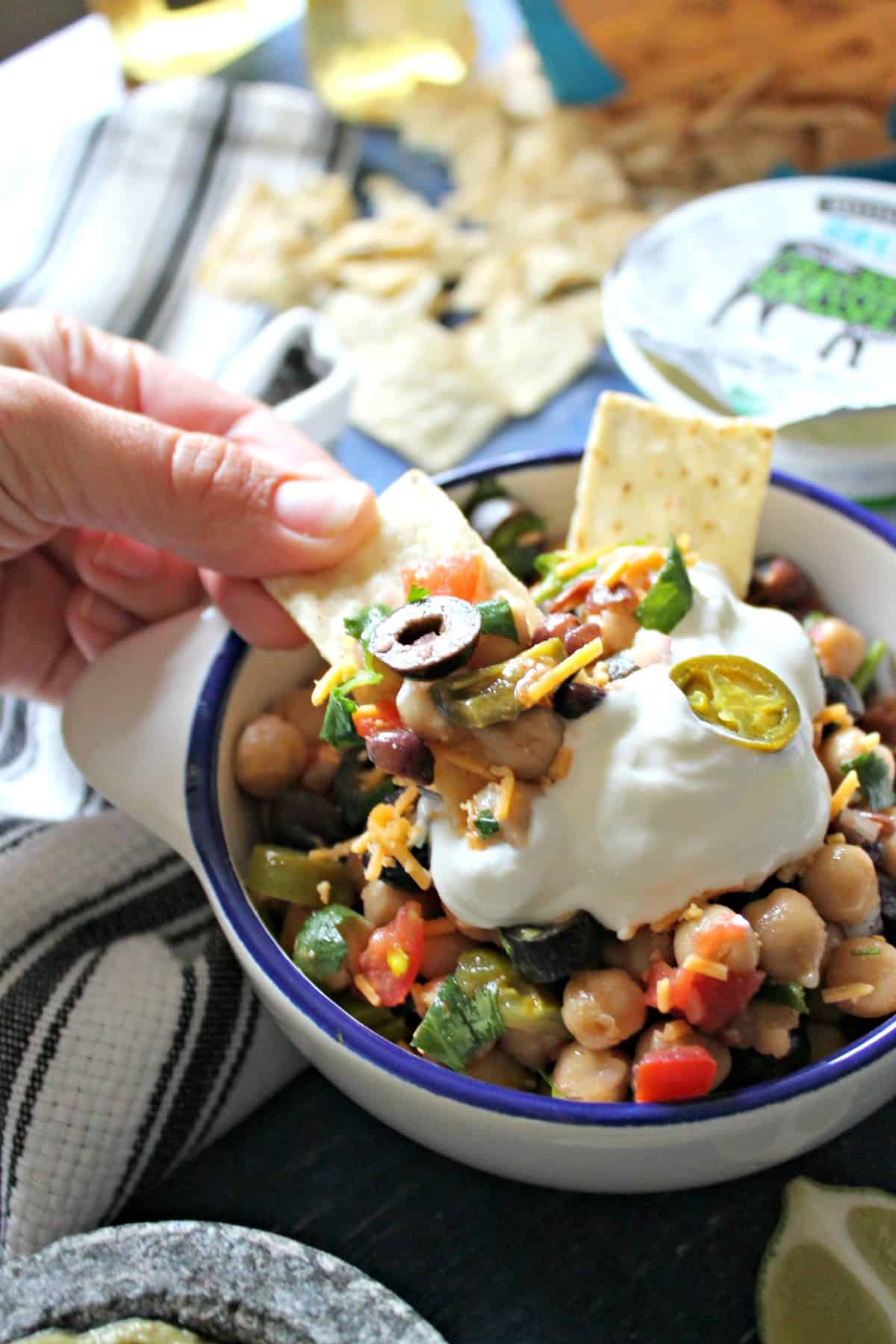 You wanna know what's really sad? My husband hates nachos, so I rarely ever make them or order them anywhere {which may or may not be a good thing} because then I'd be forced to polish them off all by my lonesome and risk clogging an entire artery. But this? This "Nacho" Chickpea Salad is something I could take down all by myself without any such concern, because while it most definitely contains some of the ingredients that make nachos super tasty, it's so much better for you.

Packed with protein and fiber, chickpeas are an ideal snack for that snacky feeling that tends to creep up while game-watching. By loading up the salad with nacho-esque toppings like black beans, chopped tomatoes and onions, olives, jalapenos, and even a bit of cheese, you're getting all the flavor without the regret. A dollop of Stonyfield Whole Milk Greek Yogurt adds a healthier version of that sour cream-like tang that is often the crowning glory of a plate of nachos! Serve with your favorite dippers like pita chips or whole grain tortilla chips for an irresistible Super Bowl snack or, heck, gobble it up with a fork for lunch! 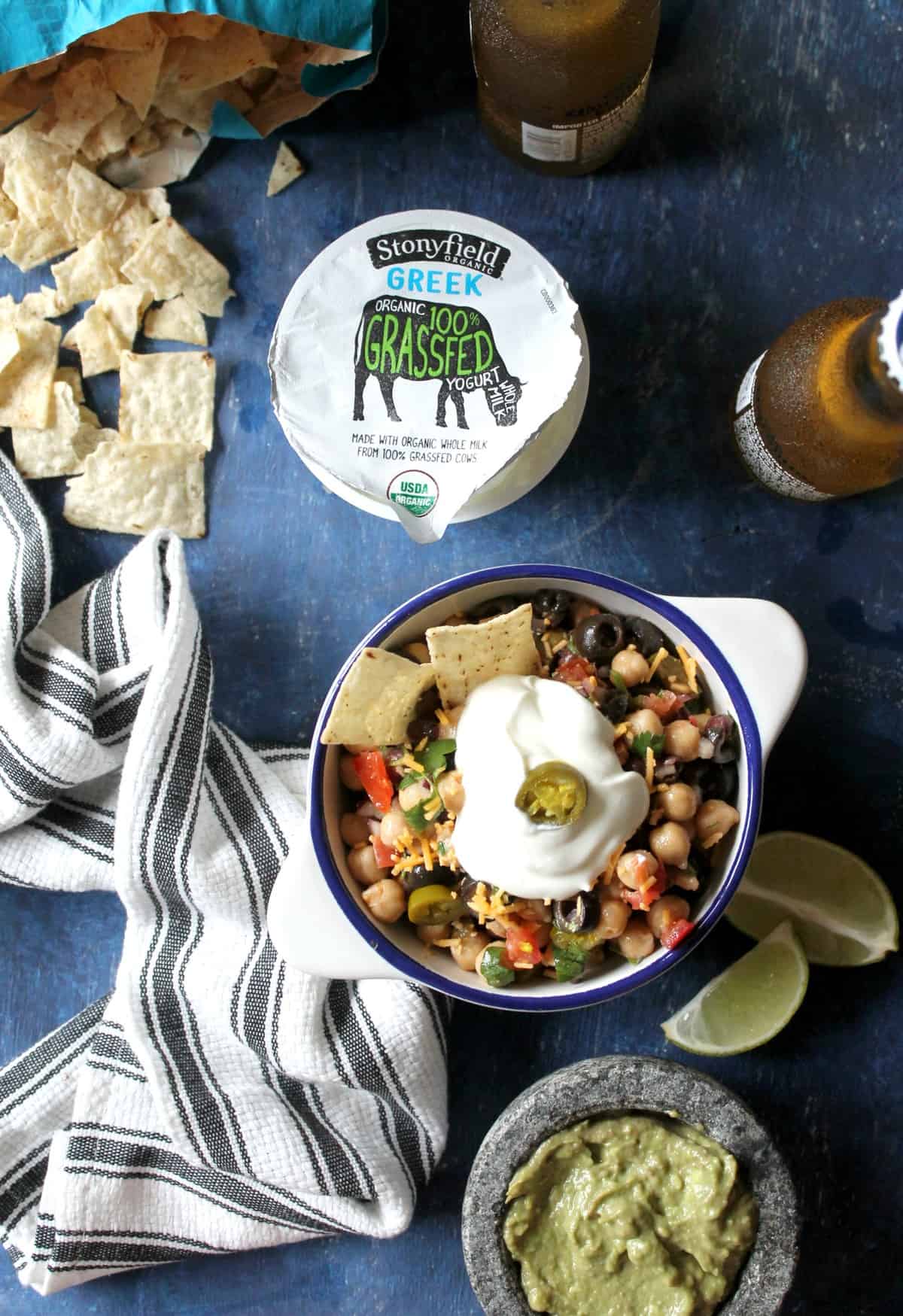 I'll definitely be keeping my eyes open for more supermarket inspiration, but in the meantime, you can find me diving right in to this superb salad.

P.S. The amounts in this "recipe" are purely a suggestion -- add as much or as little of each ingredient as you like or make swaps based on your preferences. 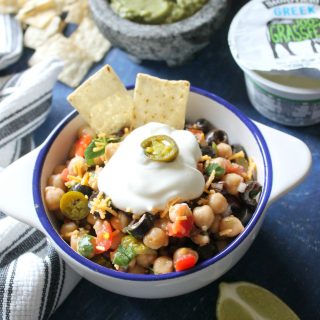 The Kitchen Prep
By loading up the salad with nacho-esque toppings like black beans, chopped tomatoes and onions, olives, jalapenos, and even a bit of cheese, you’re getting all the flavor without the regret.
Print Recipe Pin Recipe
Prep Time 5 mins
Total Time 5 mins
Course Appetizer, Sauce
Cuisine American
Servings 4 servings

If raw onion is too strong for you, chopped scallions make a nice, milder alternative.