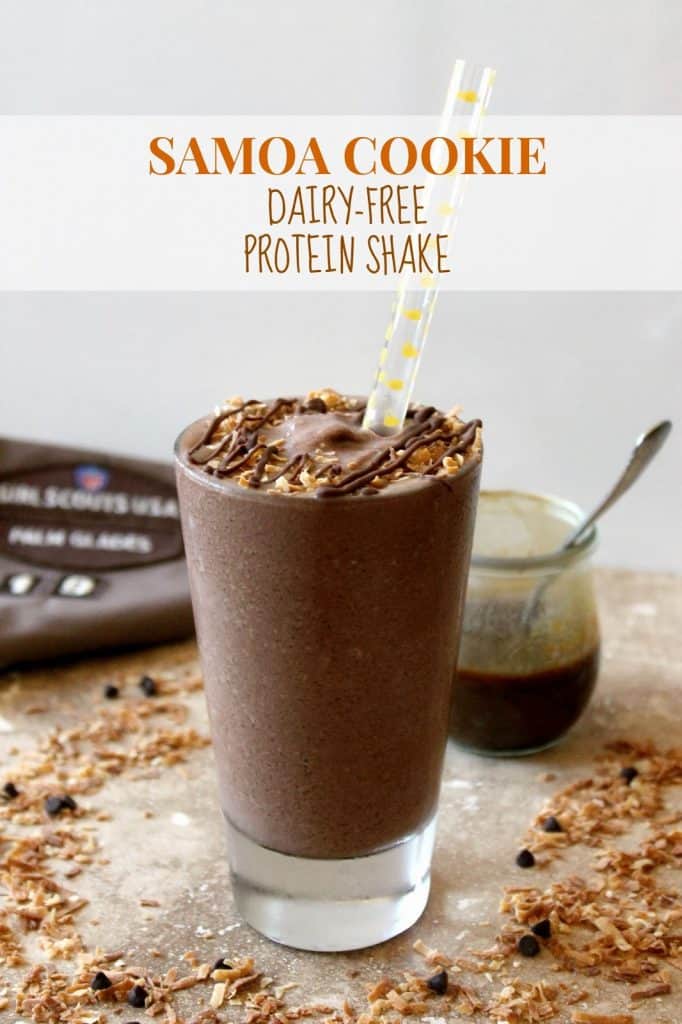 Lately I've been feeling a bit conflicted. Caught between two worlds of food.

I love my naughty baked goods made with tons of butter and sugar. But recently, I started experimenting with healthy treats and have begun to find myself scouring the archives of paleo blogs for hours on end. This is not something I ever thought would happen. The word "Paleo" was pretty much a swear word around here -- not because I wasn't into the healthy eating lifestyle but because I was so.very.sick of hearing people use the word. And because every recipe I'd come across seemed to contain bacon. That just can't be right. {Note: I love bacon. But what the heck?}

I blame my change of heart on a friend's Paleo potluck where I first brought these chocolate chip cookies. I'm not going to lie, they weren't the absolute best thing I've ever tasted. But they weren't bad, either. They just needed... something. Which made me want to spend more time looking into different versions and testing them out for another try. {Side note: This is a great recipe. Everyone I've made these for has raved. I'm not putting the recipe down, I'm just saying they're not a dead-ringer for the real thing.}

The thing is, I don't want you to think I'm having some sort of food blog identity crisis or something. Because I'm not. I just like lots of different things and I don't discriminate if it tastes good. But then there's the whole "positive reinforcement" thing where I notice that recipes resembling cupcakes and other ridiculous concoctions {ahem, Chocolate Whiskey Caramel Marshmallow Bacon Bark... there's bacon, does that make it Paleo?} run laps around other perfectly respectable and delicious things like Individual Strawberry Crisps.

It's enough to send a girl into a panic attack, yelling, "What do you want from meeeeeee?" But that's not going to resolve anything, now is it?

Except I don't call it that. Because we know how I feel about that word.

My recent transition to working in my husband's office has also had a bit of an impact on the things I want to admit to making, baking and eating. When his patients find out that I have a food blog and say, "So, you must post all kinds of healthy things!", I find myself in a bit of a predicament.

But, I don't see anything wrong with letting the two worlds collide, do you? 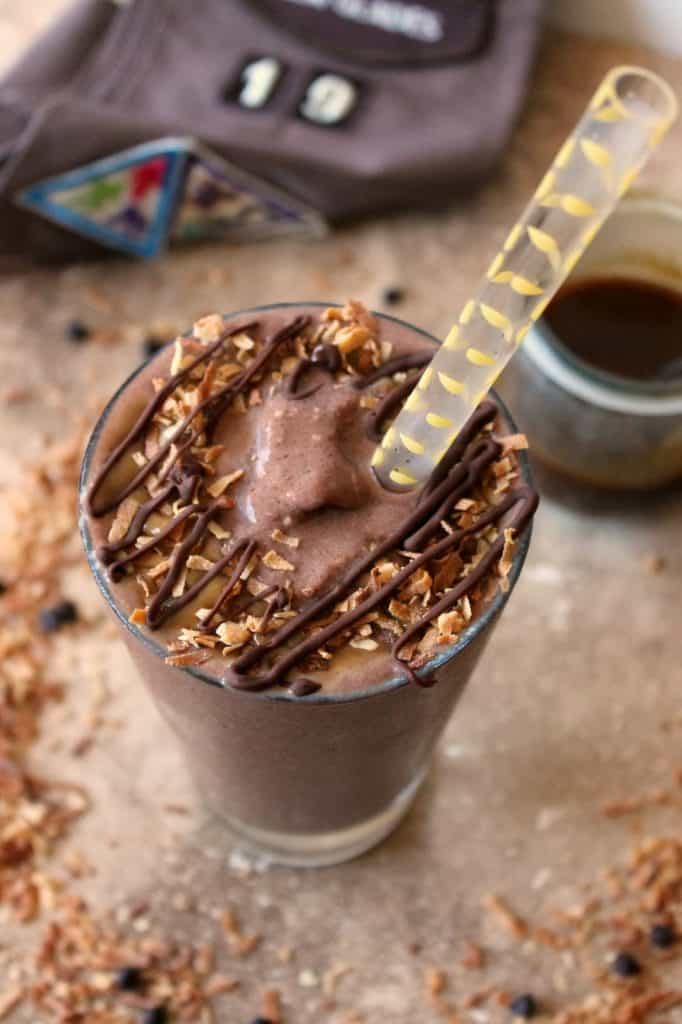 This "Samoa Cookie"- inspired protein shake is something I could easily share with both food camps without a drop of guilt. Modeled after the flavors of the celebrated Samoa Girl Scout cookie {yes, I totally busted out my vintage Girl Scout Sash circa 1988}, luscious notes of chocolate, coconut and caramel give the illusion of sinful delights all while delivering a healthy dose of protein. P.S. I'm kind of in love with the caramel sauce recipe I discovered that uses coconut sugar and coconut milk for a healthified version. 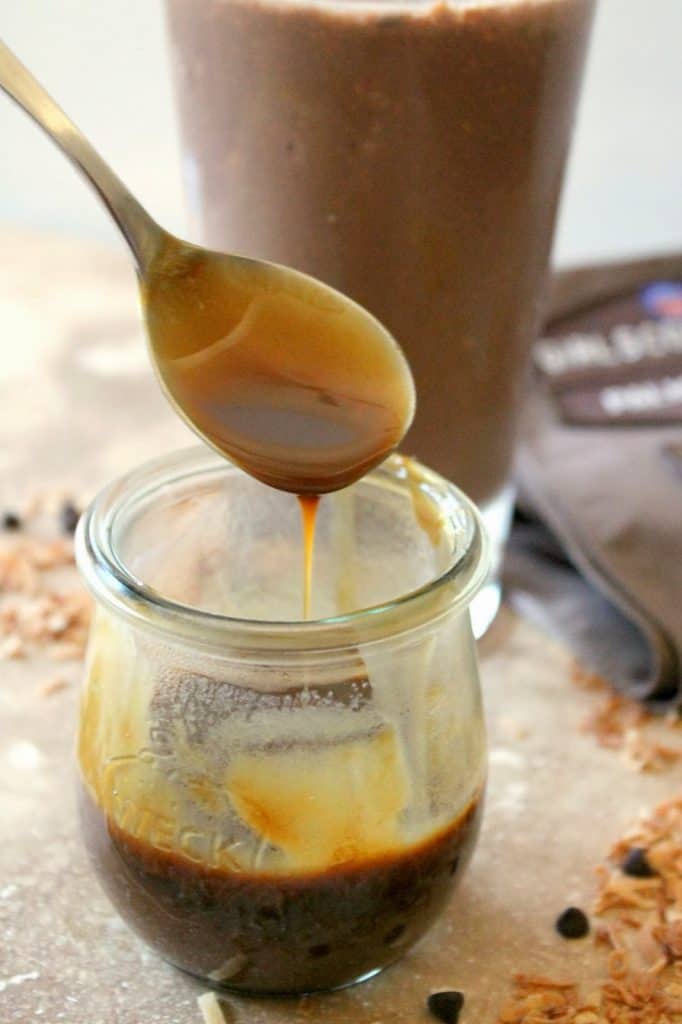 Here's a little secret: I totally used the dairy-free protein powder we sell in the office because 1. It's a brand my husband created and, you know, support and 2. I have to know what to tell people when they ask me what it tastes like and what to do with it. So, there. Disclosure. 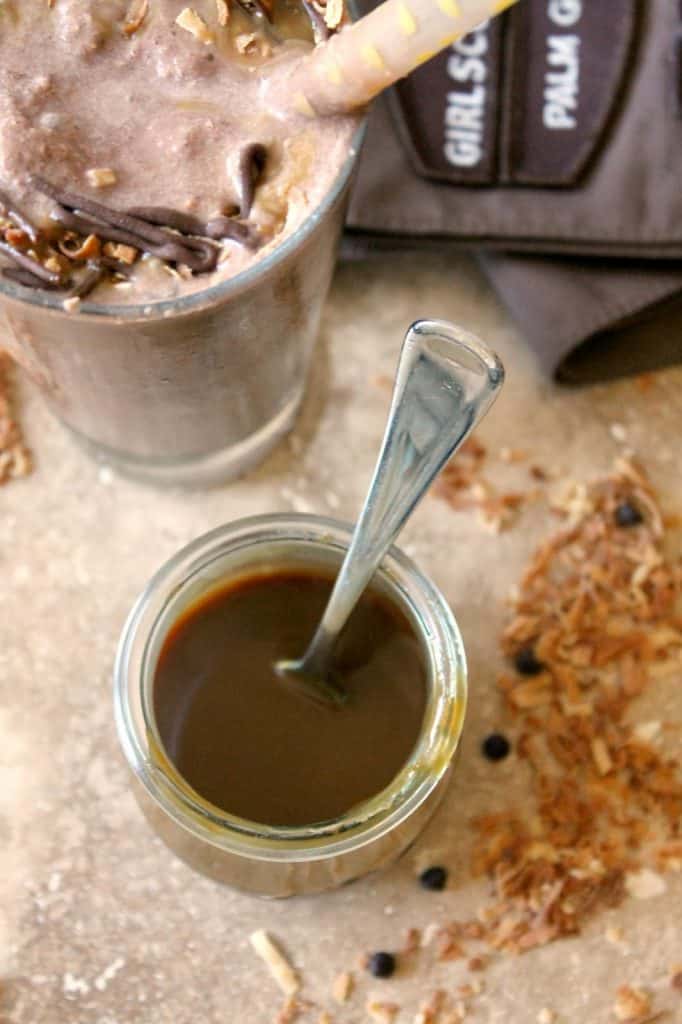 With a "protein shake" this good, it's hard to know what category to file it under. I'll just go with, "Delicious."

2. Pour into a glass and garnish with toasted coconut flakes, extra caramel sauce, and a drizzle of melted dairy-free chocolate chips, if desired.

*I found that the coconut flavor was very mild. For a coconutty boost, consider adding about ⅛ teaspoon of coconut extract.