Looking for a delicious Miami food tour during your visit? Check out my review of Miami Culinary Tours in South Beach! 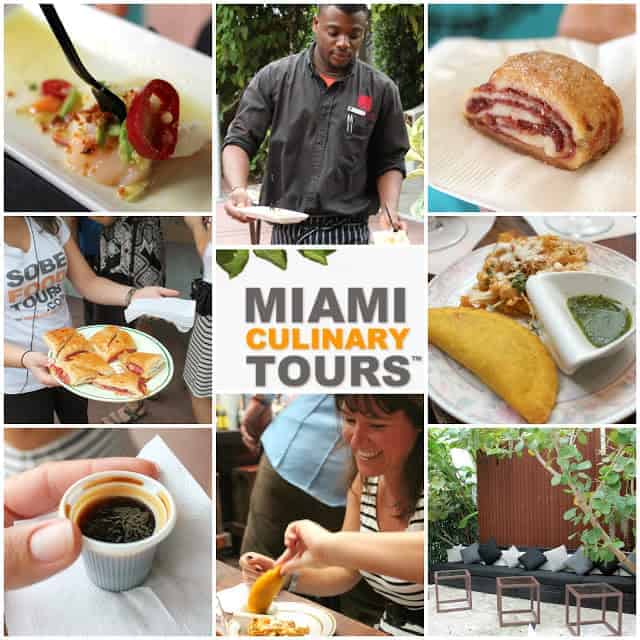 Sometimes I forget that the area where I live is where people choose to spend their time vacationing. I guess being a South Florida native can make you take warm weather, sandy beaches and turquoise waters for granted.

Another thing I often overlook? My close proximity to Miami! I mean, people from all over the world fly in to spend time in a place that's just a little over an hour from my home... driving distance. And here I am, complaining that Miami is too far away for more visits. {By "far away", I obviously mean outside the invisible force field that keeps me from crossing the Palm Beach County line.}

When I got an email from Miami Culinary Tours inviting me to come check out the local cuisine, I decided it was high time I venture down to the place that beckons to sun-worshipers, culinary enthusiasts and celebrities alike. {Did I mention I was actually born in Miami??}

Miami Culinary Tours offers several different tasting experiences from Little Havana to the artsy Wynwood neighborhood. I decided to take the South Beach Tour since my last visit to the trendy locale was over 10 years ago! 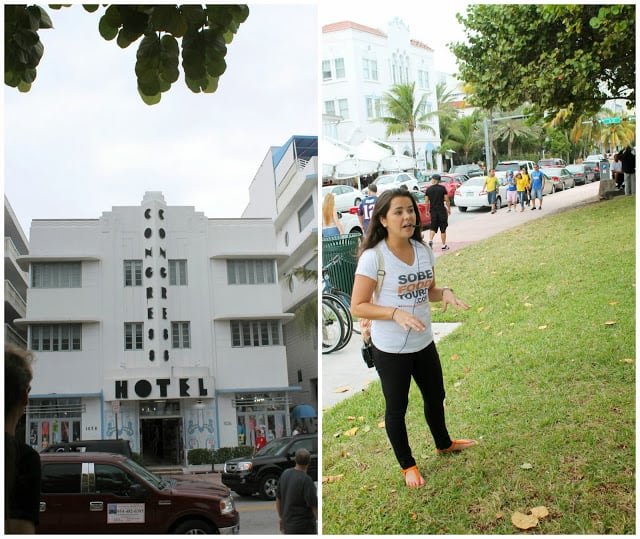 Our tour guide, Cassie, was cute as a button and full of all kinds of information about the area, the history and, of course, the food! We got to the good stuff right away at our first stop...

Steve and I had some time to take a peek around The Angler's Boutique Hotel before the tour began and it was charming. The chic restored Mediterranean revival resort had features like dreamy vine-covered walls and cozy seating areas tucked away that make you want to stay a while. {Or, you know, forever.} 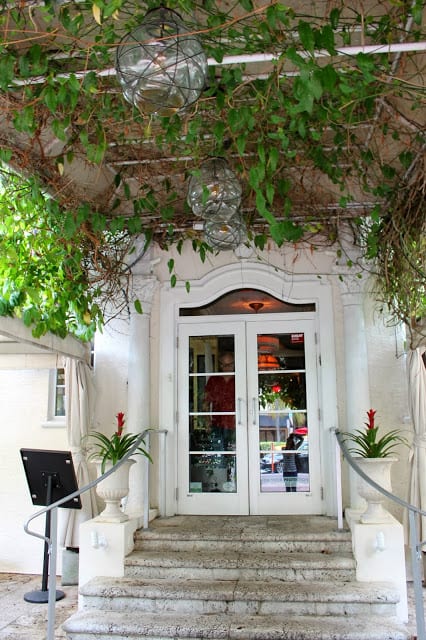 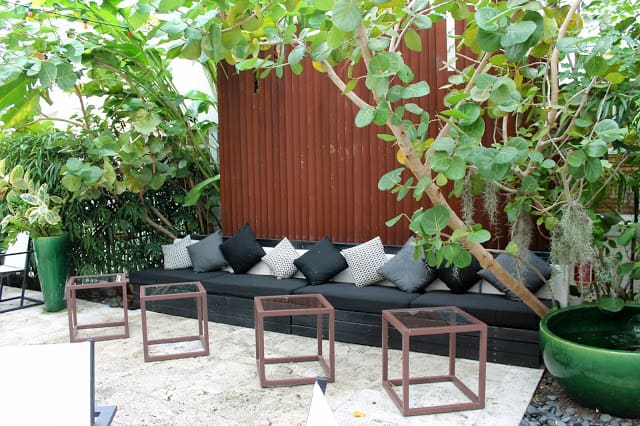 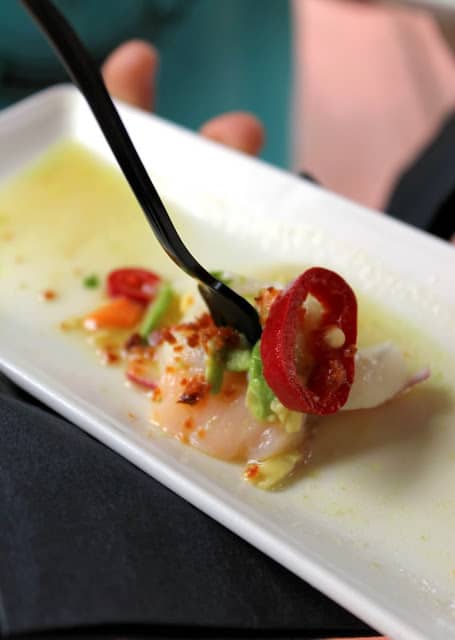 Chef Carlos Torres spices up the menu with mouthwatering items with a "Floribbean" flair. The Scallop Tiradito was bursting with flavor {and a touch of heat} and it definitely whetted our appetites for all the food to come!

We walked over to Bolivar where the vibe quickly changed from relaxed to energized. The bright, quirky space had a fun feel to it and the food followed suit! 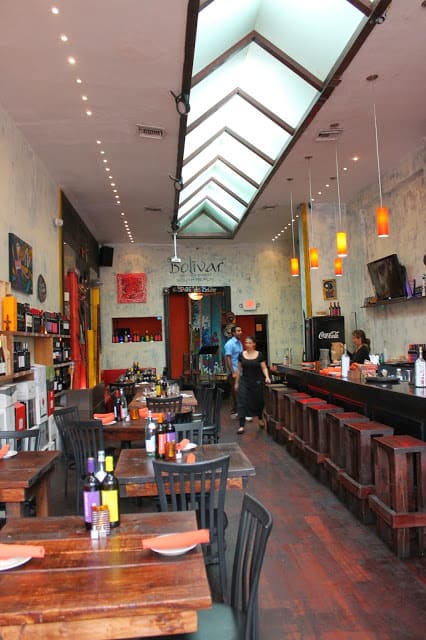 Though I'm not a huge fan of deep fried foods, the Columbian-style empanada and crunchy plantain with shredded chicken paired with a spicy chimichurri-type sauce were both too flavorful to refuse. The most surprising part of the sampling came when we were served "Refajo" cocktails, made from a combination of soda & beer! A bit odd, yes, but refreshing and pretty tasty! 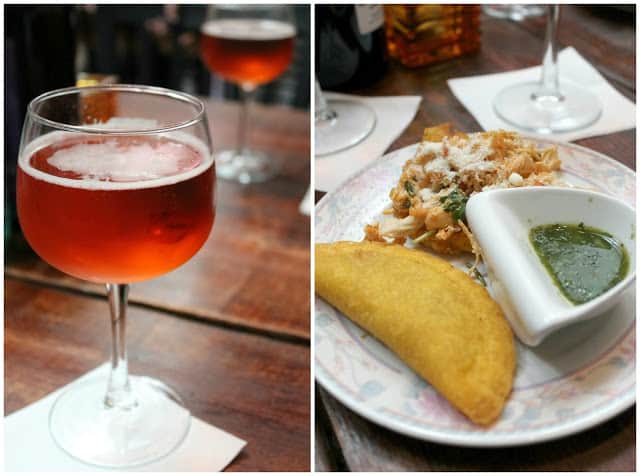 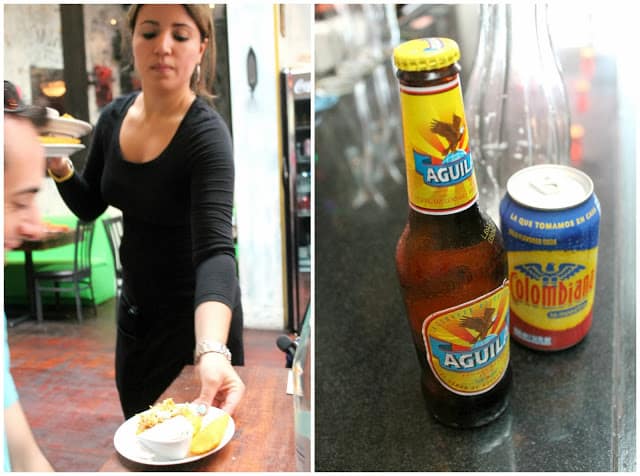 You simply can't experience Miami fully without Cuban coffee and guava pastries. It's a law, I think. So, our next stop at David's Cafe was abiding by the rules of South Florida. We strolled up to the ventanita {window} at David's for our little taste of Miami. 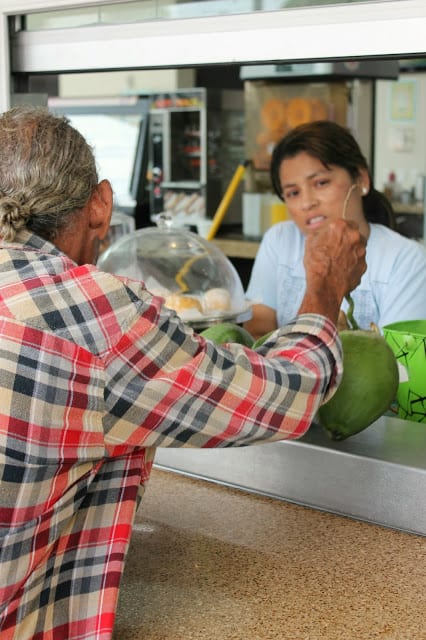 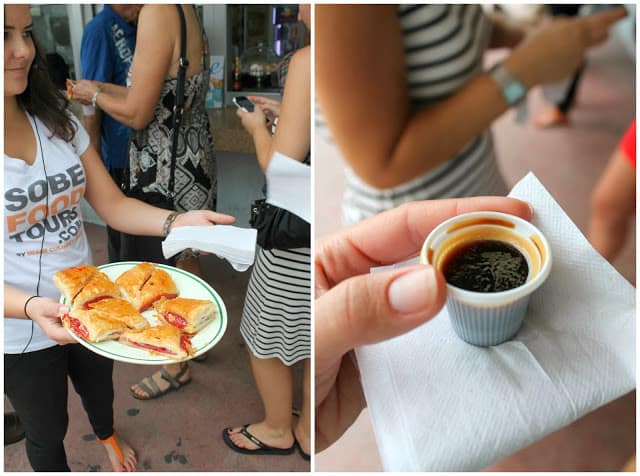 I have eaten many a guava pastry in my life. David's didn't disappoint with its flaky pastry and sticky, sweet guava filling Truthfully, I think it's hard to make a pastelito that I don't like. The thimble-sized shots of Cuban coffee counteracted any lethargy that might have been taking hold at this point in the tour. Syrupy sweet and s.t.r.o.n.g. Definitely not for the faint of heart, but exactly how I like my coffee! It's the Cuban in me, what can I say.

Because we weren't on enough of a sugar high after our Cuban treats, we headed over to Jerry's Famous Deli for another sweet bite. Jerry's wasn't at all what I expected -- quite an expansive space! Though it was large, it still maintained that definitive delicatessen feel with menu options to match. Classics like matzo ball soup and pastrami on rye mingled with unexpected additions like flavored martinis and "SoBe Mex" options. 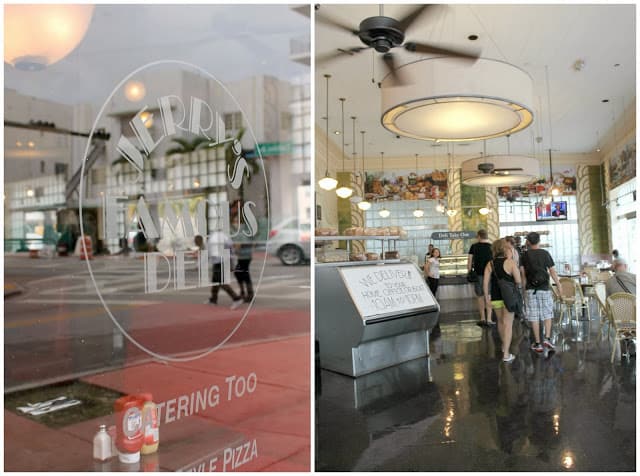 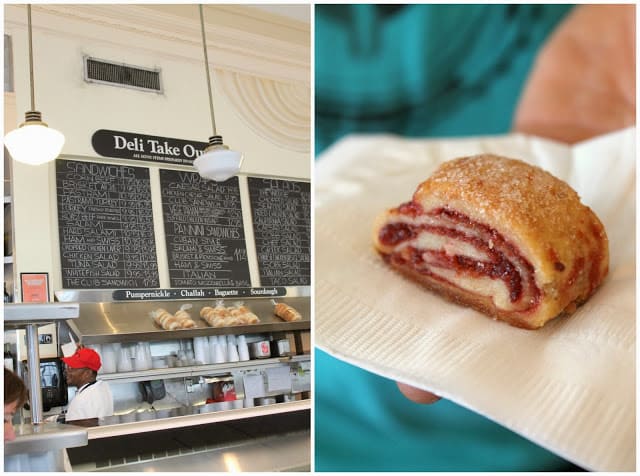 We each sampled a delicious Raspberry Rugelach, a traditional Jewish favorite. I really enjoyed the cookie {though I was starting to feel pretty stuffed!} with the rich dough and fruity filling with cream cheese adding a creamy cheesecake-like addition. I want to recreate these at home!

I couldn't believe we had a few stops left, but I marched on to our next location, Block's Pizza Deli. I'm not going to lie, I initially thought that this particular stop was a little out of place. You could tell it was a newer location, and I personally don't identify pizza with South Beach. But my questioning was soon halted when I took a bite of the "Sundried Hippie" Pocket, a delicious combo of sundried tomatoes, feta, baby spinach, pesto, and kalamata olives. 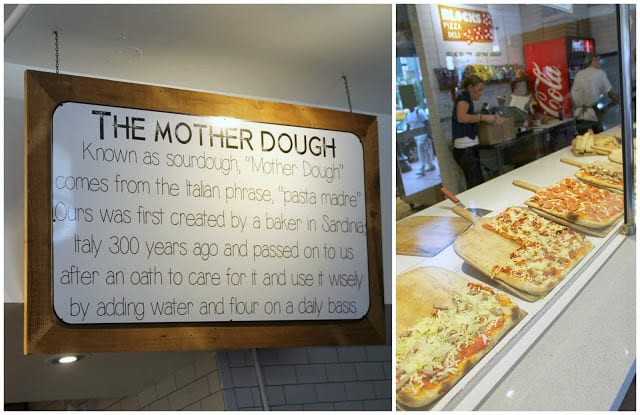 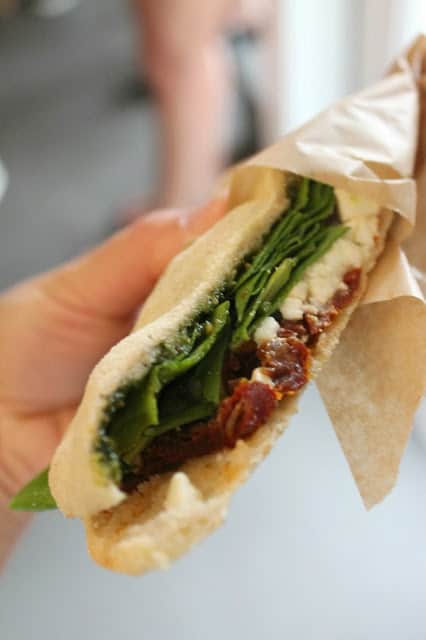 While we ate, I looked around and got a better understanding for what sets Block's apart from "just another pizza place." I found the concept of the "Mother Dough" fascinating, and I loved the fact that they really do focus on fresh, quality ingredients -- they don't even have any freezers! I would definitely want to check this place out another time.

I could have happily curled up on a bench somewhere and drifted away into a food coma by this part of the tour, but we still had more eating to do at Charlotte Bakery.

As soon as I walked in, I just had a good feeling about this spot. A family-owned and operated location, Charlotte's offers something I just adore: A smorgasbord of cultural delicacies served under one roof {and in this case, inside one bakery case}. I loved the fact that each empanada and bite was labeled with the country of its origin {as each country has its own unique approach}. 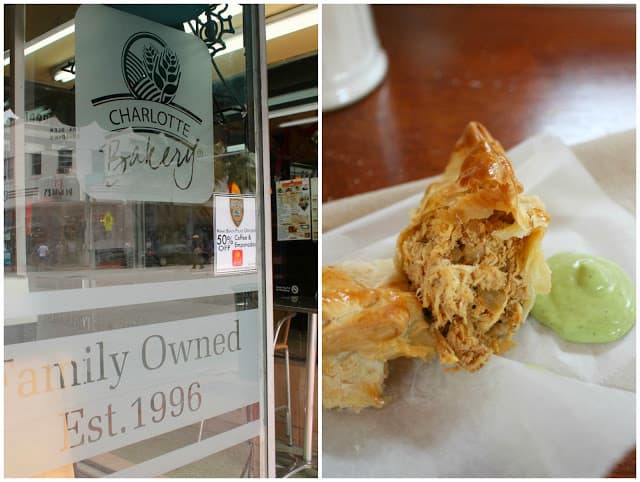 The Argentinian empanada we were served differed greatly from the deep-fried, corn tortilla-enveloped version we had earlier int the day. This baked empanada was bundled by a soft, flaky pastry and filled with seasoned, shredded chicken. Bottles of creamy avocado-cilantro sauce were passed around {and I seriously wanted to stick one in my purse to take home with me. So good.} for dipping, and the two flavors went together perfectly. I had all of 3 bites and had to throw in the towel because we still had one more stop before the end of the tour...

As full as I was, there was no way I was going to turn down gelato. And upon seeing the rotating roulette {click for an Instagram video} of flavors at Milani Gelateria, I was mesmerized.

Milani is located in what I thought was the cutest area of all the places we visited, Espanola Way. It's sort of adorable. And romantic. It made me want to find a table to sit at with Steve and enjoy a glass of wine. But alas, we had gelato eating to do. {And obviously, that's way more important.} 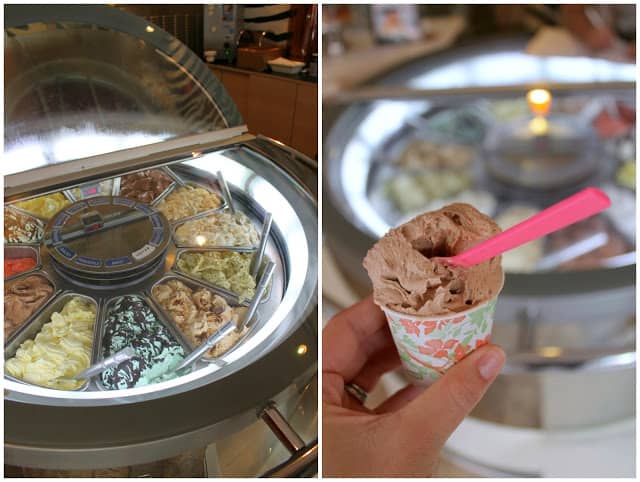 We each got to choose a flavor {I picked Bacio which tastes like Nutella, no surprise there}. The gelato was just what I hoped it would be: smooth, silky, rich... pure perfection. The perfect way to wrap up an amazing day of gluttony!

This Miami food tour gave me such an appreciation for the beauty of South Beach and made me want to come back for more. There wasn't one stop that I wouldn't return to, which I would call a success. It was way beyond what I expected, and I think it's a great way to get a feel for the area whether you're a visitor or a local.

The next time I feel like trying something new, I think I'll head back down to South Beach and do some more exploring! A huge thank you to Miami Culinary Tours for the reminder that there's an epicurean adventure right in my own backyard! 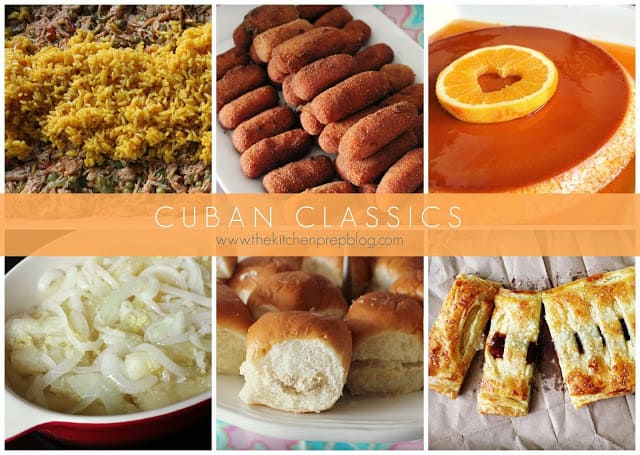