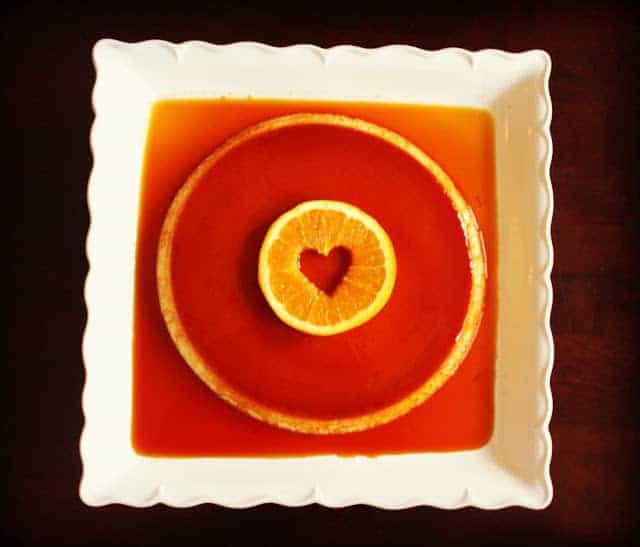 When I think of flan, I think of Abuela in the kitchen coaxing dry sugar into the pefect shade of amber for the molten caramel that got poured into the bottom of the dish. No matter how quickly she moved, strings of hardening caramel always appeared as she scraped the last of it from the pot, creating the illusion of gilded strands of thread.

I think of the vessel she always used for the flan - so well worn that it was slightly warped - and how it looked a bit like it had barely survived culinary combat.

I think of her skillfully flipping said flan onto it's serving dish with a flourish, the look on her face indicating a silent little prayer that it would stay in one piece and refrain from covering her and the entire kitchen in sticky syrup {which did happen on more than one occasion, as I recall}.

The audible "plop" of the flan belly flopping onto the serving plate, caramel syrup bathing the finished product and pooling around the bottom was confirmation that it was, indeed, a success and dessert was near. 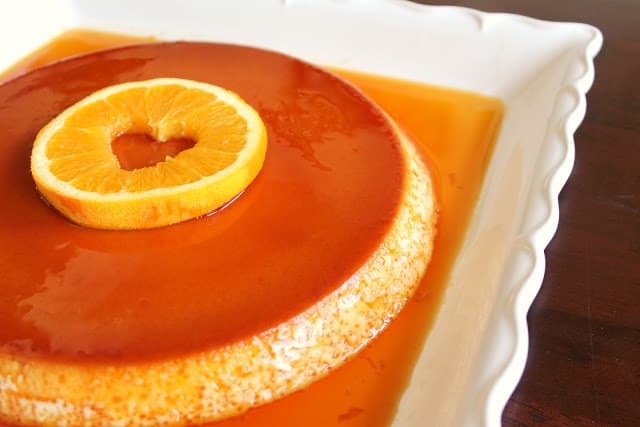 Yet, despite being witness to the production, flan {like the yuca con mojo I mentioned earlier in the week} was one of those foods that it took me a while to warm up to. I kind of have this thing about gelatinous foods. Jello and sometimes even pudding sort of ick me out. And flan, with it's eggy consistency, can fall into that category depending on who makes it and how it's made.

I never had the heart to turn down Abuela's flan, perhaps because I saw how much attention she gave it. Even in serving it, she seemed to coddle each little slice, carefully tilting the dish and dipping a small spoon into the caramel syrup, and drizzling each piece as if she was preparing it for it's big debut. How can you say "No, thanks" to that? 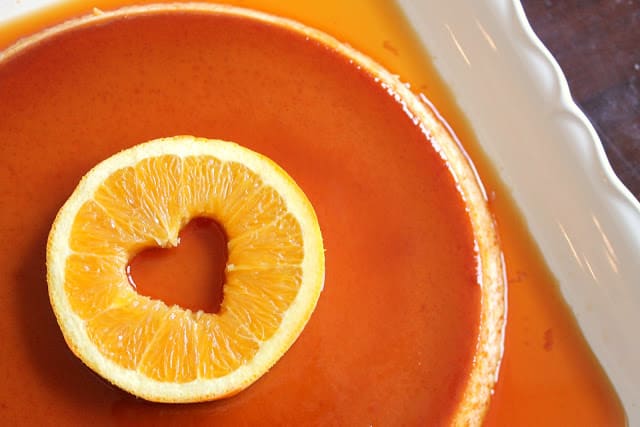 This flan is given a little pizzazz by infusing it with orange zest for a subtle citrusy flavor. I liked the addition because it took some of the focus off of the texture for me {which isn't so bad now that my palate has matured a bit}. Hands down, my favorite part of making this flan was thinking back on the memories that come with taking a bite of a dish from your past.

This week of sharing my family's favorite Cuban recipes has been so wonderful. Like browsing an old photo album or watching home videos, bringing out recipes and flavors from your past is one of the best ways to both reminisce and explore your family history. And as always, sharing a meal brings family and friends together to create even more memories to add to the collection.

Thanks for being a part of them!

Preheat oven to 350 degrees. Have your 2 quart oven-proof glass dish or mold on standby since you will have to move quickly with the caramel.

In a small, heavy saucepan, cook ½ cup of dry sugar over medium high heat until starting to bubble. Cook for about 3-5 minutes, stirring frequently, until it is light amber in color, careful not to burn {which can happen very quickly, so remove from heat as soon as the color gets to where you want it}.

Carefully {and quickly} pour caramel into oven-proof dish and swirl to coat the entire bottom and a little of the sides. Set aside to harden.

In a small saucepan over medium heat, stir together cream and ½ cup sugar until steaming, but not boiling, stirring to dissolve sugar. Remove from heat. Add vanilla extract.

In a mixing bowl, combine eggs, orange juice, orange zest, and salt, and whisk until smooth and lightened in color. Slowly add the cooled cream mixture a little at a time, and stir until completely incorporated.

Prepare a water bath - Place your baking dish in a roasting pan or another larger pan. Fill with lukewarm water until about ⅔ of the way up the sides of the baking dish {careful not to get any water in your dish}. Using a fine mesh strainer, pour egg and cream mixture into baking dish. Discard solids.

Bake for 1 hour or until the tip of a knife or a toothpick inserted in the center comes out clean. {Will still be jiggly, but set.} Remove from oven and allow to come to room temperature. Cover and refrigerate until cold.

To unmold: Run a knife along edge of dish. Place a serving dish or platter upside down on top. Quickly invert {over a sink, preferably, so you don't cover your kitchen in syrup}. Garnish with orange if desired.