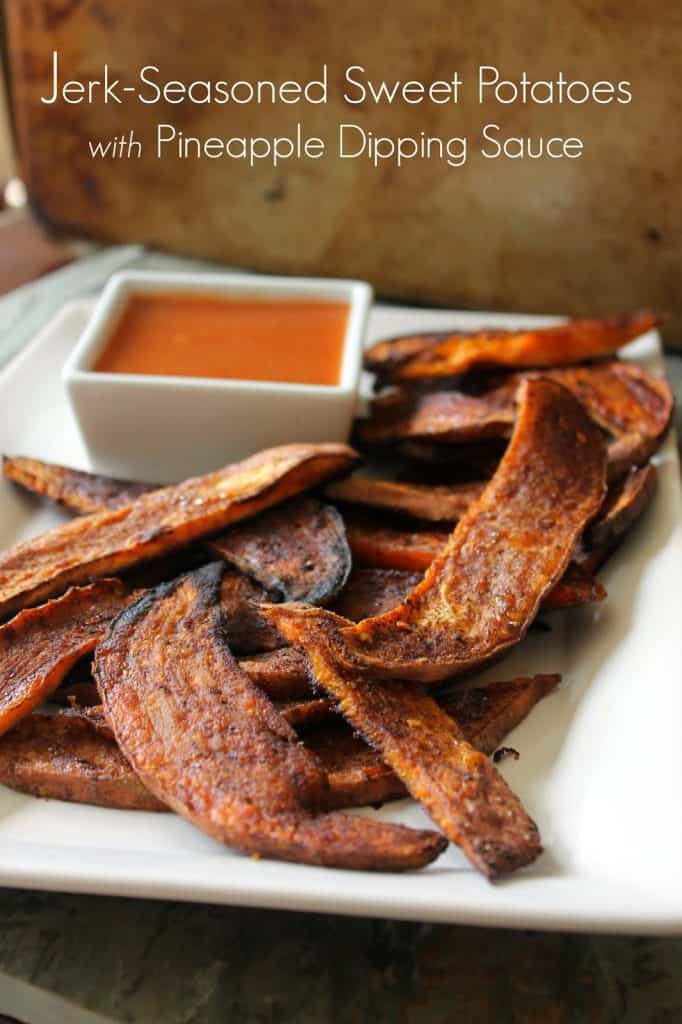 {Not interested in baby talk? Scroll to the bottom for the recipe!}

Well, I've officially reached the half way point of pregnancy: 20 weeks! Now that I'm closer to meeting our little guy {!!!}, I feel like I have gained some perspective about this whole thing. I'm far enough in to have minimal some hindsight, and have enough time left ahead of me to still know that feeling of uncertainty.

But as you'll find out soon {if you haven't already}, pregnancy is one of those things that people like to talk about like they have it all figured out... whether they have gone through it once, 12 times, or just have a friend who did. Everyone is an expert.

I can't claim to be anywhere near a guru, but I CAN tell you what I've learned so far in my own pregnancy:

1. Pregnancy may exacerbate hypochondria.
Are you a person who often blows little symptoms out of proportion? Do you find yourself WebMDing the heck out of every freckle, ache, sniffle, etc. you experience? Well, guess what? Now there are TWO of you to Google diagnose. That's right. And there are a multitude of NEW websites that will allow you to indulge your irrational {and sometimes rational} fears.
Pregnancy comes with lots of fun new feelings and physical changes, some that you'd expect and some that you'll swear were caused by exposure to some sort of alien disease. I'm learning not to freak out over every little thing. Until the baby arrives. And then I'm sure we'll be back at square one again.
2. Cravings are for real.
In the very beginning, I didn't have very many symptoms {which is probably a good thing since, you know, hypochondria}. But one of the first things I experienced was that hankering for something. For me, the cravings have been savory, vinegary, sour and bitter. For example, it was not uncommon to find me standing over the sink eating my way through an entire jar of pepperoncini. Or sauerkraut. Or sauteing up entire bunches of broccoli rabe to eat in one sitting.
Before I shared the news with my family, I had lunch with my mom and sister and proceeded to eat the pickles off everyone's plates. I'm apparently that pregnant girl. It could be worse. I could crave really bad for you things. Or things that are inedible altogether. So, I'll take my cravings without complaint!

However... I also feel like people use pregnancy "cravings" as an excuse to eat poorly. There's nothing wrong with indulging every once in a while, but giving yourself the go-ahead too often can definitely start some bad habits early on and create an avalanche of undesirable things. {i.e. Excessive weight gain, poor nutrition, extra symptoms, etc.}

I've found that I can stave off cravings by thinking about what I'm craving and figuring out why I want it so badly. Got an itch to eat ice cream? Fruit smoothies and slushies are cold and sweet, just like ice cream but minus the extra calories and fat. Dying for some potato chips? Get your crunch from veggies and healthy dip like hummus, or get a salty fix from a handful of olives. Can't stop thinking about french fries? There are lots of baked, healthier versions of those greasy goodies!

Eat smart -- you're eating for two! And that doesn't mean double the amount. 😉

3. The labor of love of motherhood begins with giving up coffee. {And wine.}
So, back before I was even pregnant, but knew I could potentially be soon, I decided to go ahead and wean myself from caffeine. And what I discovered was this: I can take or leave caffeine. But don't mess with my coffee.
That routine of fragrant, sweet, creamy {yes, I add half & half and sugar, sue me} coffee in a nice hot mug is precious to me. And though I stocked up with lots of delicious decaf teas, they weren't the same. So I've not given up my morning cup completely -- just switched to decaf. {Which, by the way, is not completely free of caffeine. I just keep it to one cup.}
I'm not gonna lie, there were some drowsy mornings for the first few weeks. I think I was more tired from lack of caffeine than from early pregnancy symptoms. It wasn't fun, but it was worth doing before actually having to.

Some moms-to-be don't stress too much about the caffeine thing, and it's really a personal choice. In fact lots of doctors will tell you that you can enjoy a regular cup of coffee a day if you'd like and that it will most likely have no effect on the baby. I felt most comfortable keeping it very minimal or non-existent, especially in the first trimester. Do what works for you & stay strong if you decide to decaffeinate... it DOES get better!

4. Pregnancy tests do, indeed, have an expiration date.
This may be TMI, but it is a tale that needs to be told. Years and years ago, I purchased a home pregnancy test kit as a precaution. It was one of those cheap 3 packs. I used one and had two more that sat untouched... for about 5 years.
Come February of 2014, I really did need to use them. Except, at this point, they were several years past their expiration date. But, of course, that didn't stop me. Because if I was going to toss them, shouldn't I just go ahead and pee on them anyway? {Like I said, TMI.}
Anyway, if you ever wondered what happens when you are, indeed, pregnant and you do decide to use an expired test, I am here to solve that mystery for you. This particular test had a window that would show "+" for a positive result and "-" for a negative result. To be 100% honest, I didn't even think I was pregnant, so I was expecting to see a clear "-". What I got was neither of the above. What I got was this: "|".
A solid vertical line. Talk about confusion.
Clearly, I made the time to stop by the store and buy a current pregnancy test with a very easy-to-read digital screen that simply states either "pregnant" or "not pregnant"... just in case there was any more doubt thrown into the mix. The new one worked {shocking, I know.}. It worked better than I even anticipated. With a big fat, "PREGNANT" splashed across the screen. I almost passed out.
Which brings me to my next point...
5. Do not believe what people tell you about pregnancy.
"It's not going to happen on the first try," they said. "It'll probably take a while," they said. Well, maybe it does for some people. But sometimes it doesn't. {Like, "first try" doesn't.} So don't start trying unless you're really, really ready to get that + sign. {Or a vertical line, as the case may be...}

This is also true for any unsolicited advice you receive about: weight gain, morning sickness, eating habits, bodily changes, mood swings, stretch marks, etc. etc. etc. I would say that the majority of the things that I've been told would most definitely happen have not. I still have 20 more weeks to go, so I'm not completely doubting all those gems, but I'm also not proclaiming them Gospel truths.

Don't listen to people. Not because they don't know, but because every person is so very, very different that no pregnancy is "textbook." And people will try to be so sweet and helpful and brimming with information. Smile and nod and take it with a grain of salt. What they said may be true. But then again, it may not. And that's the only surefire piece of advice I will be offering you about the whole thing.
{As a side note, everything else I've mentioned above has been my personal experience, not a guideline for you. Because you're not me. And clearly you wouldn't want to be now that you know how neurotic I am.}
6. Like weddings, babies are a business.
First and foremost, babies are a blessing. But don't be fooled -- they are also a huge opportunity for companies to prey on doe-eyed first time parents and milk you {no pun intended} for all you're worth.
From the moment you find out you're expecting, you can also expect to be bombarded with things you NEED for baby. Things that parents CAN'T do without. Because, let's remember that cavemen totally had Boppies. {I'm not hatin' on Boppies. I'll probably get one. But I'm just saying...} I have been trying to remind myself that the most important thing I can give my baby is my attention, care and love. Because those are the things that really matter the most. And are conveniently portable, convertible, ever-available and longest lasting. 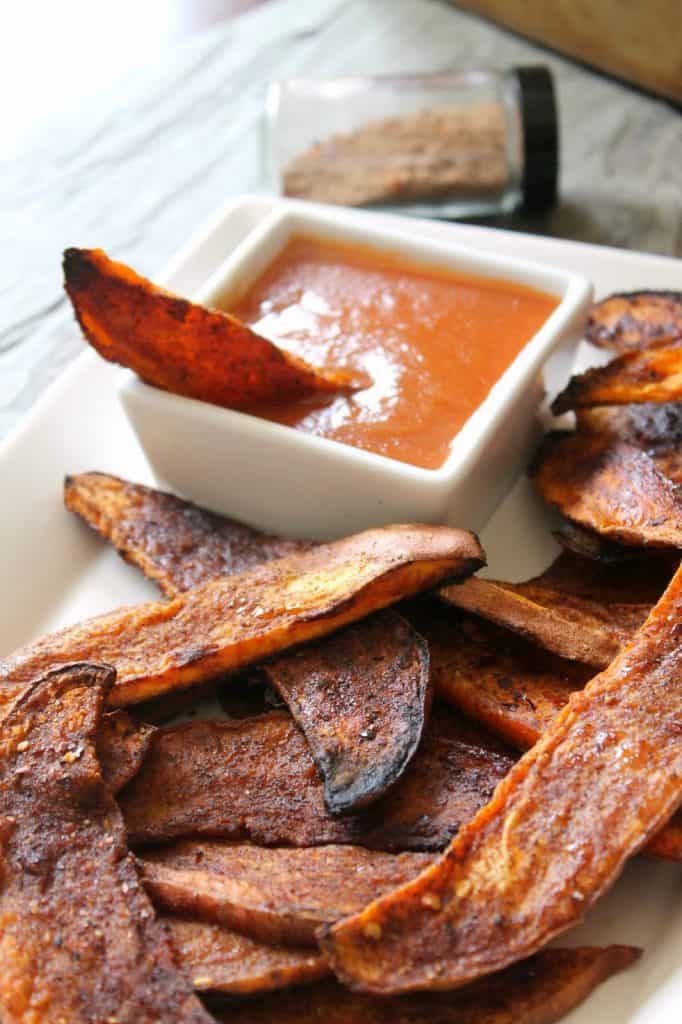 I'm pretty lucky that most of my cravings have been pretty healthy. Currently, I can't get enough fruit -- even fruit that I'm not usually fond of! But when those salty cravings hit, I want something full of flavor, but not full of bad stuff.

You know what packs a one-two punch? Sweet AND salty things. Like these sweet potatoes with spicy jerk seasoning and pineapple dipping sauce.  These are pretty addictive, especially if you like some spice in your snacks. 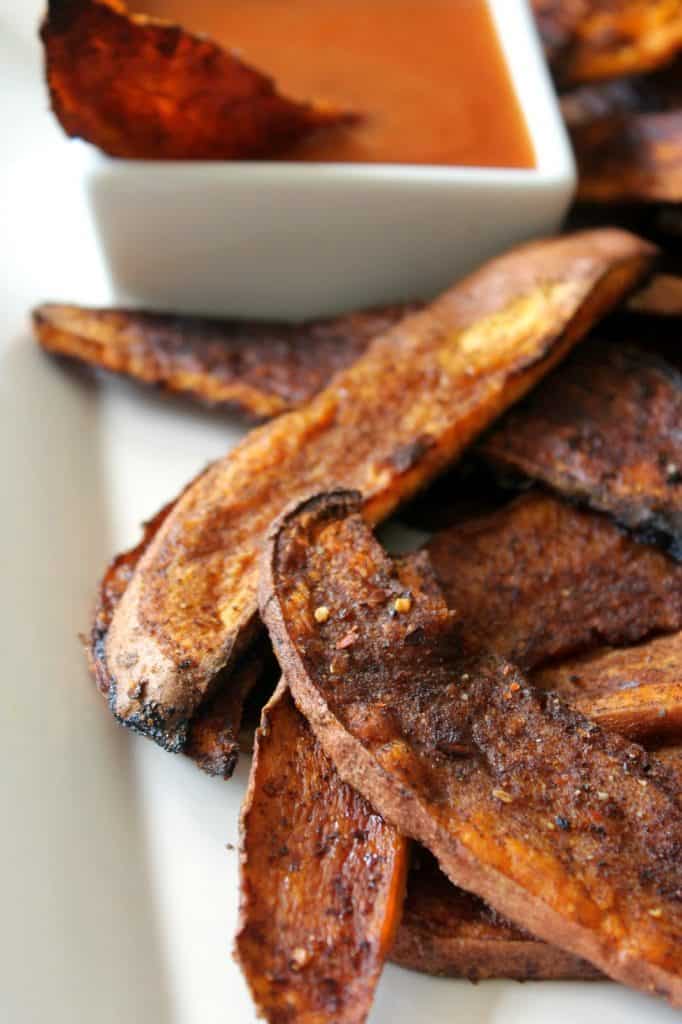 I slice my sweet potatoes into about ¼ inch pieces and roast them after sprinkling them with homemade Jerk seasoning. Jerk seasoning is full of all kinds of spices that taste amazing together -- cinnamon, cloves, cumin, allspice and red pepper flakes. The brown sugar helps create a caramelized outside on these zippy bites. 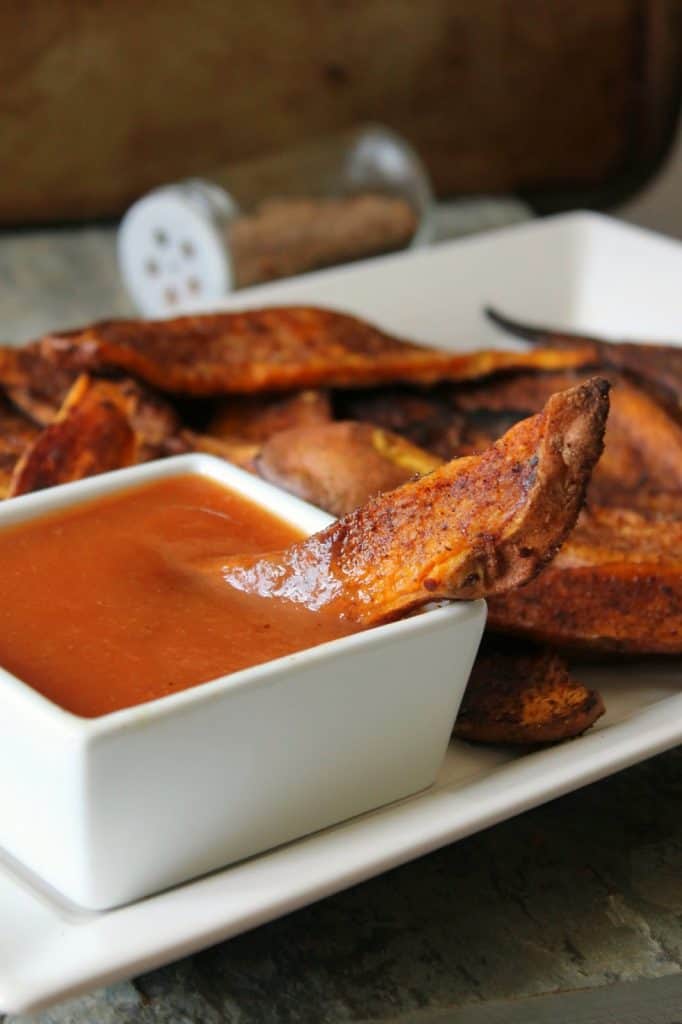 Warning: If you're experiencing heartburn during your pregnancy, you may want to skip the copious amounts of red pepper flakes. They've definitely got some heat. I haven't had any issues, but I'd hate for you to feel like a fire-breather after eating these! 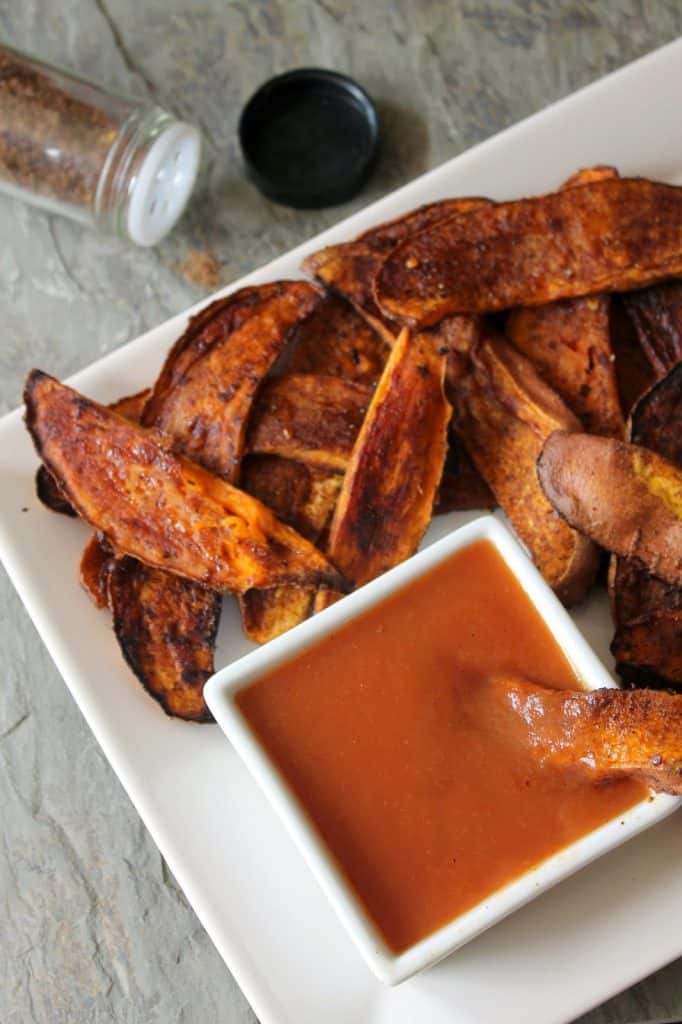 Pregnant friends: What kind of cravings have you had? Do you indulge them or find suitable substitutes?

1 medium to large sweet potato, scrubbed, sliced in half & then cut into ¼ inch slices {or however you prefer}
Olive oil

For Seasoning:
Slightly adapted from Aaron McCargo on Food Network

1. Preheat oven to 425 degrees. Prepare a large baking pan by lining with foil and drizzling with olive oil.
2. Place sweet potato slices on baking sheet, rubbing both sides with olive oil.
3. Sprinkle with desired amount of seasoning, then flip slices and sprinkle other sides.
4. Bake for about 30-35 minutes or until the slices are tender and browned. {Keep an eye on them as sugar has a tendency to scorch.}
5. Remove from oven and cool slightly {they'll be sort of floppy when they first come out, but will firm up a bit as they cool.} Transfer to a serving platter. Serve with Pineapple Dipping Sauce.

1. Blend ingredients together in a blender or food processor. Transfer to a small saucepan.
2. Bring to a bubble over medium-high heat, whisking until slightly thickened.

Pour into a serving dish and set aside to cool.