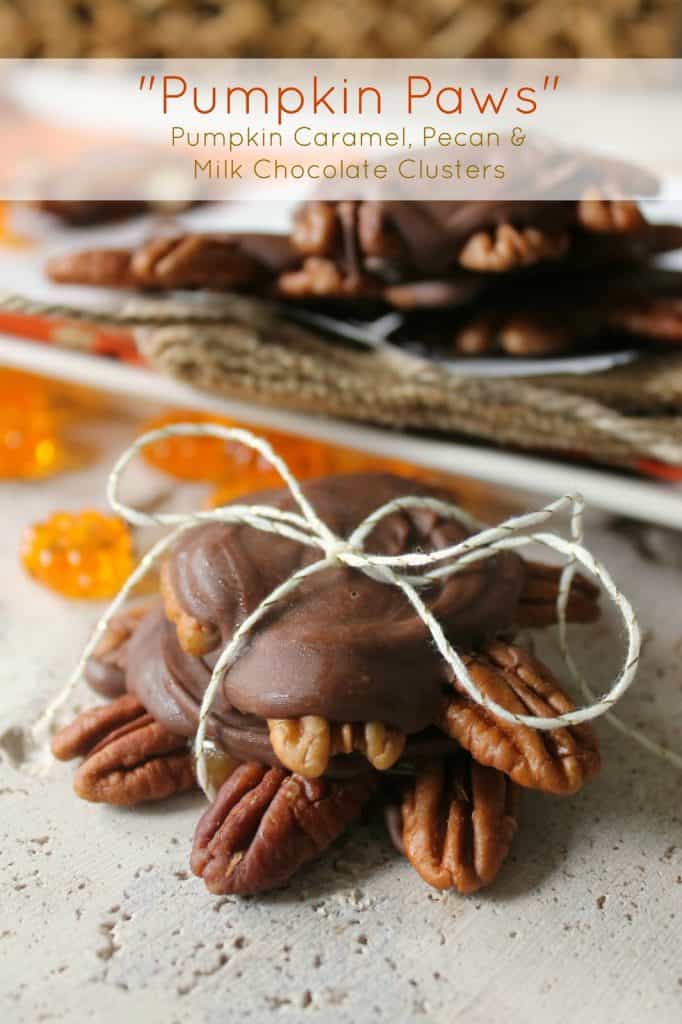 Let's talk for a minute about the {brief} bout of guilt that I felt when I made these Copycat "Pumpkin Paws." They are in no way, shape or form healthy. Like, not even debatable. And then it dawned on me that I am far too pregnant to care about such things at this moment, and I went right on with my self-indulgence. And I'm happy I did.

I know it's been "all preggo, all the time" around here as far as talk goes, so I'm trying to appease those of you who might be getting all eye-rolly on me with treats that will make you forget that I can't talk about anything else at this moment because it has taken over my life.

I've reached the highly uncomfortable portion of the show at 37 weeks. The other day, I texted one of my friends, "If you ever decide to have a baby, I highly suggest planning nothing for the final 3-4 weeks of your pregnancy. And I do mean nothing. Like, hire someone to come wave palm fronds and feed you grapes kinda nothing."

Except, I can't seem to follow my own advice. Trying to continue normal life with a 6 pound weight in your gut and ever-widening girth isn't as easy as one would think it is. I mean, aside from feeling completely off balance and like I might actually bust open at the seams, all is well. So I keep on attending events and engagements like nothing is particularly off. My RSVPs, however, have become very conditional as I have to temper my enthusiastic, "I'll be there!" with a tentative,"... If I'm not in labor." Minor annoyance.

My clothes don't fit over the belly. {See, I knew there might be a little problem down the road when I was all, "I'm barely buying maternity clothes. It's just silly.} It's even more frustrating because they fit everywhere else. It's just that midriff baring isn't as adorable with a Buddha belly. So, I basically have 3 outfits left to wear until this child enters the world. Cute.

I have also been reduced to sleeping on the couch surrounded by a nest of pillows because it is the only place I can get anywhere near comfortable. The only issue is that Farley isn't fond of mom & dad's separate sleeping arrangements; he spends half the night scaring the crap out of me checking on me or sleeping on my feet, which doesn't lend itself to much rest.

Because I don't understand the word "rest", I sent myself into a Braxton-Hicks tailspin over the weekend and had crazy contractions that lasted for 2 days straight. In a panic that this kid was going to make an early appearance, I cranked preparations into high gear and am now pretty much as ready as I'm gonna get for him to join us, so that's a plus.

It was after this incident that I decided that a little bit of candy is not going to kill me. It might actually prevent me from killing anyone else. 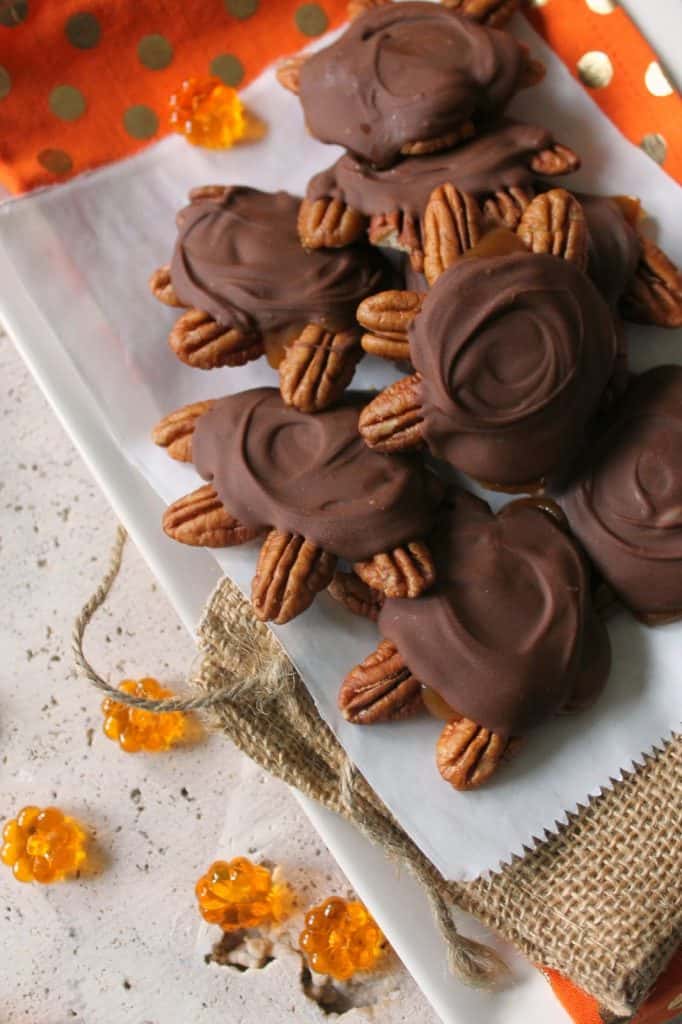 Since Halloween is around the corner, I thought some homemade candy might actually be fitting. But honestly, I would have justified such a thing even if it were just Groundhog's Day... because chocolate.

While lustfully browsing Williams-Sonoma's fall products a few weeks ago, I saw something that stood out to me: Pumpkin Paws. "Clusters of spiced pumpkin caramel and crunchy almonds covered in Guittard milk chocolate." I liked the sound of it. 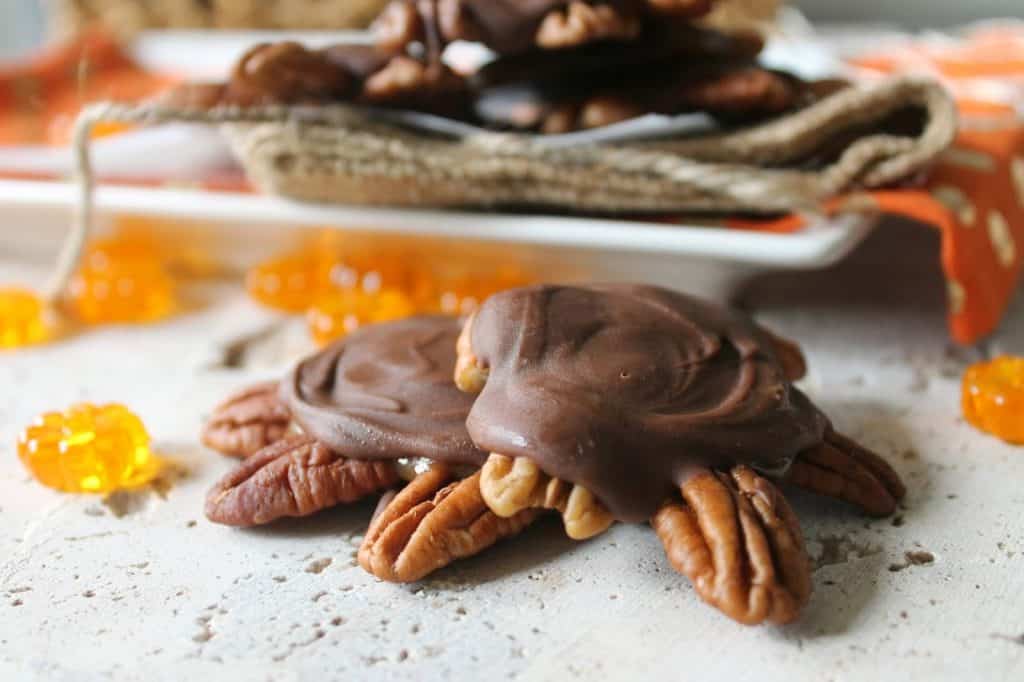 In my own version, I swapped out the almonds for pecans, which I think taste more Fall-like. I didn't even use fancy milk chocolate. Just melted Publix chocolate chips. And guess what? They turned out pretty darn amazing. 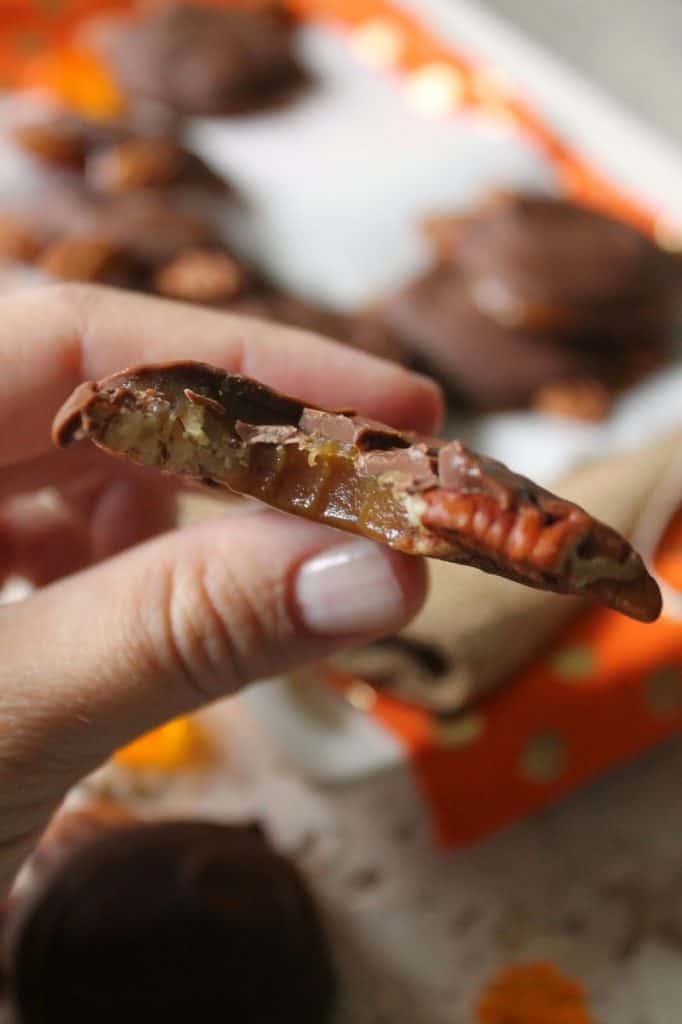 A word of warning -- the recipe for the pumpkin caramel makes a lot. Like, enough that unless you are accustomed to eating straight up chunks of caramel on the daily {which honestly doesn't sound like a horrible thing, if we're being real}, it's going to take you a while to go through. So... I used half the leftovers to turn into homemade chewy caramels and the other half for something that you will have to see to believe. If you thought this treat was naughty, then you may want to avert your eyes. Stay tuned... 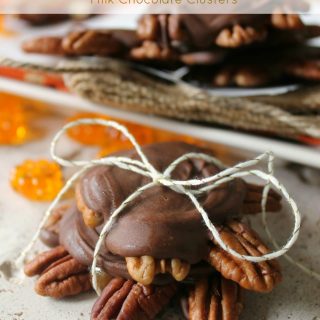 The mixture will be super-duper hot. You don't want to mess with molten caramel. Don't be tempted to stick your finger in or lick a spoon -- you'll be sorry. If using for Pumpkin Paws, allow the caramel to cool slightly {it'll start to thicken and get less liquidy} and spoon over pecans. This would also be the time to pour the caramel into a buttered or parchment-lined pan if you plan on making homemade caramels. One the caramel cools completely, it'll hold its shape but retain a soft and chewy texture. Remove from the pan and cut into small squares; wrap individually in waxed or parchment paper.
« Baby Prep: Gifts for Parents That Say, "Life Isn't Over" + Apple Cider Caramel Sauce
Eau Spa | Manalapan, Florida + Turkey Meatball Flatbread Sandwich »