Let party-goers take the fiesta "to go" with these adorable Margarita Party Favors! A few margarita-making essentials all bundled up in a festive little bag. Bust them out at your Cinco de Mayo party or summer barbecue and there will be "cheers" all around! 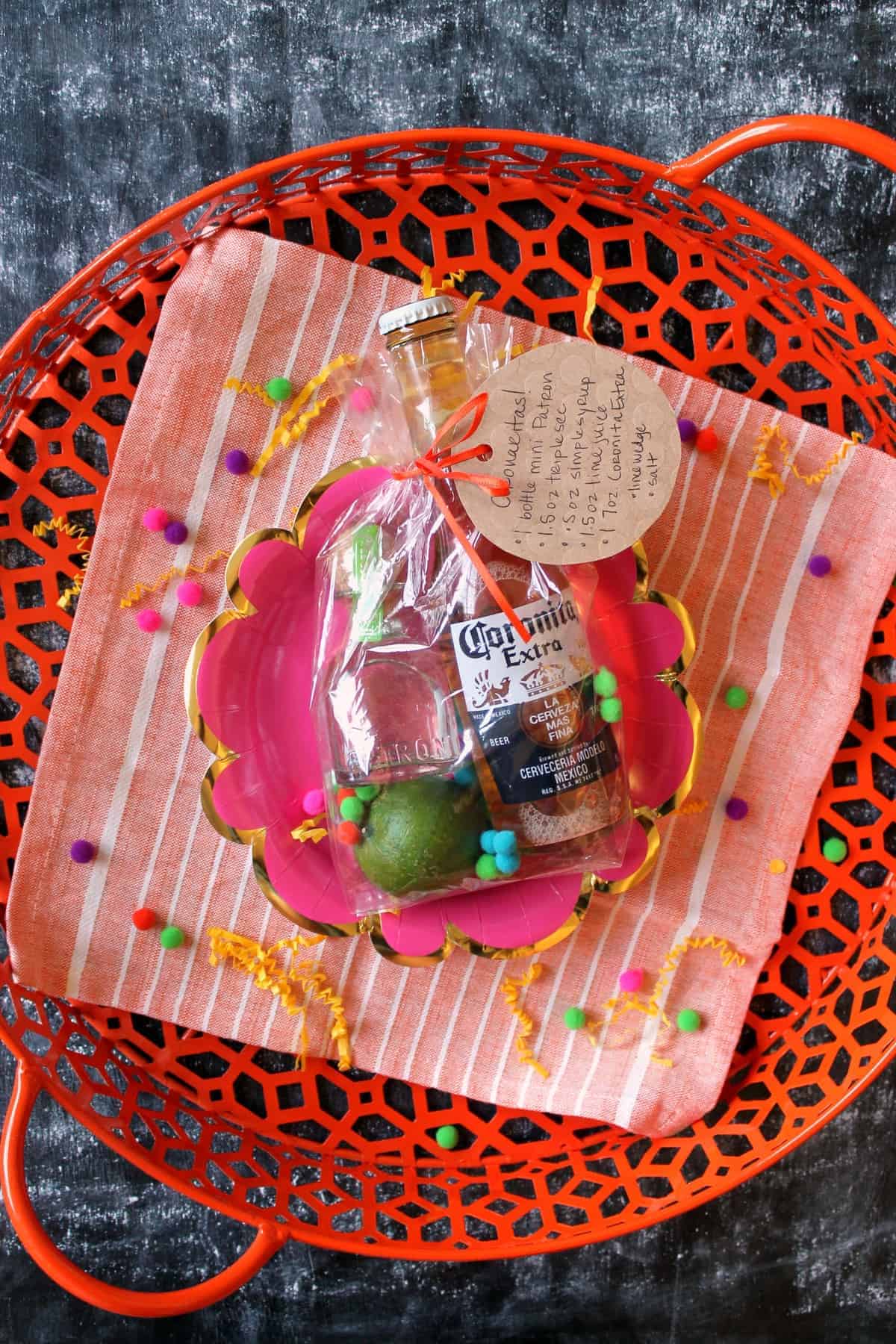 I'm not sure when Cinco de Mayo became a "thing", but I do know that margaritas have been a beverage I've celebrated with forever. {And by "forever" I mean the 5 years I've been able to consume alcohol legally. ::Ahem:: ok, 14 years... but who's counting?? STOP COUNTING.}

In college, we lived right down the road from an On the Border restaurant, and my roomates and I were regulars on Fridays when they had their 2-for-1 margarita specials. Sitting at a high top surrounded by fraternity guys swarming the free burrito station was the first time I felt the "buzz" of a margarita. It was delicious and delightful. We celebrated birthdays, holidays, the end of finals -- you name it! -- over pitchers of margaritas.

When my husband and I moved to Texas, margaritas once again became a celebratory cocktail. Only this time, they were MUCH better. It was over margaritas {once again at On the Border... we were new.}  that we celebrated my landing a teaching job only days before the start of the school year. {It was a major relief as we had moved before I had secured a teaching position.} We discovered the glorious margaritas at Chuy's in Dallas, and three years later when it was time to leave my Texas "family" and head back to Florida, my girlfriends and I met at Cadillac Ranch for drinks, guac and lots of hugs.

Years later, we visited our old college stomping grounds just a few days after my younger sister, who was attending at the time, turned 21. Oddly enough, they had opened a Chuy's in Gainesville, so it was like a little part of Texas had followed us home to Florida. We took her out and initiated her into margarita-drinking at the place that held so many fond memories for us.

So to me, any occasion where there is the promise of a margarita is one to look forward to, because it usually means being with friends and having stories to tell afterwards. {Albeit edited ones.}

Many a margarita will be poured tomorrow in celebration of... well, whatever most people that know nothing about Cinco de Mayo celebrate. So, I made you a drink. Sort of. 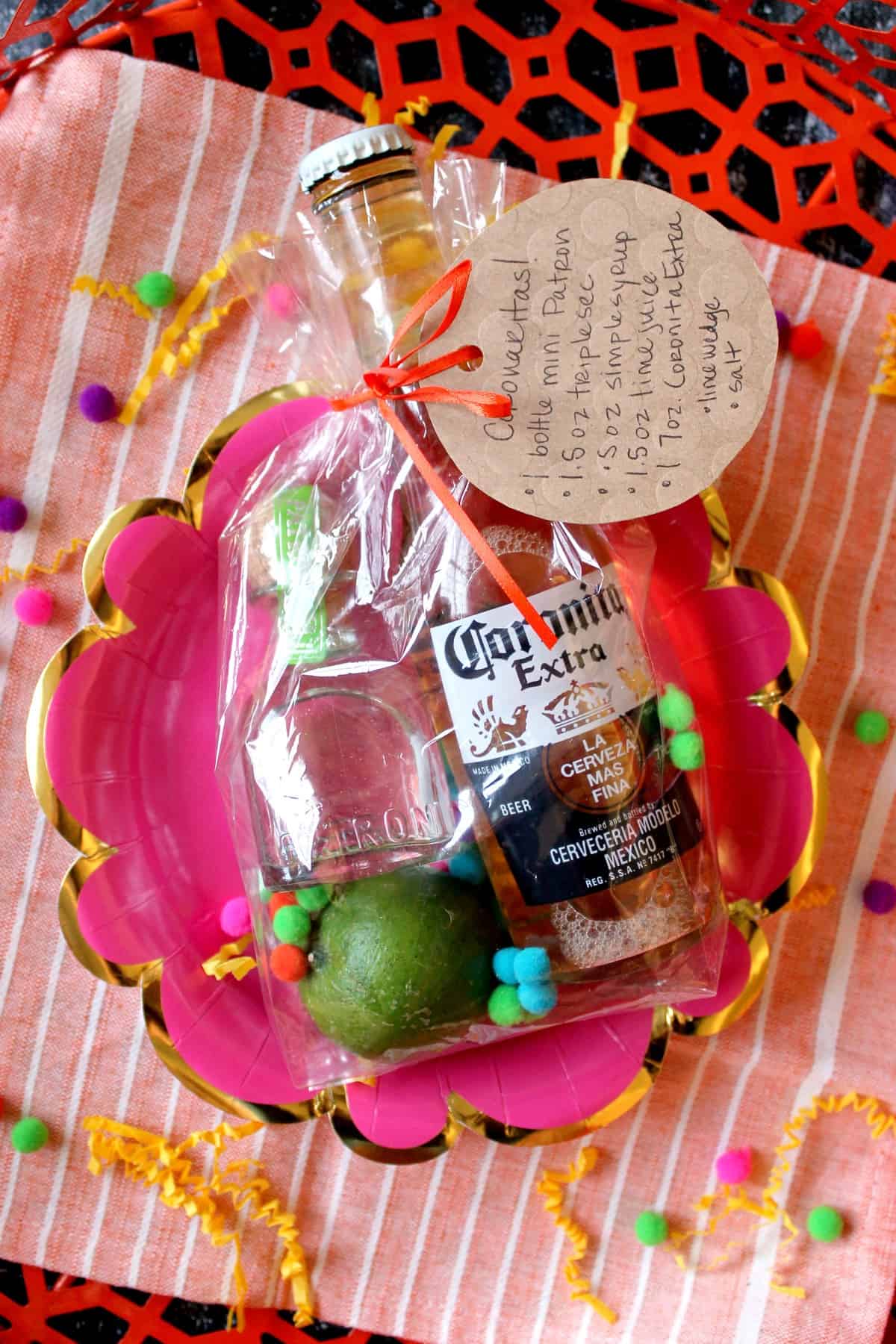 Maybe, "I made you a bag with a few ingredients for a drink." is more accurate. But it's also very cute. 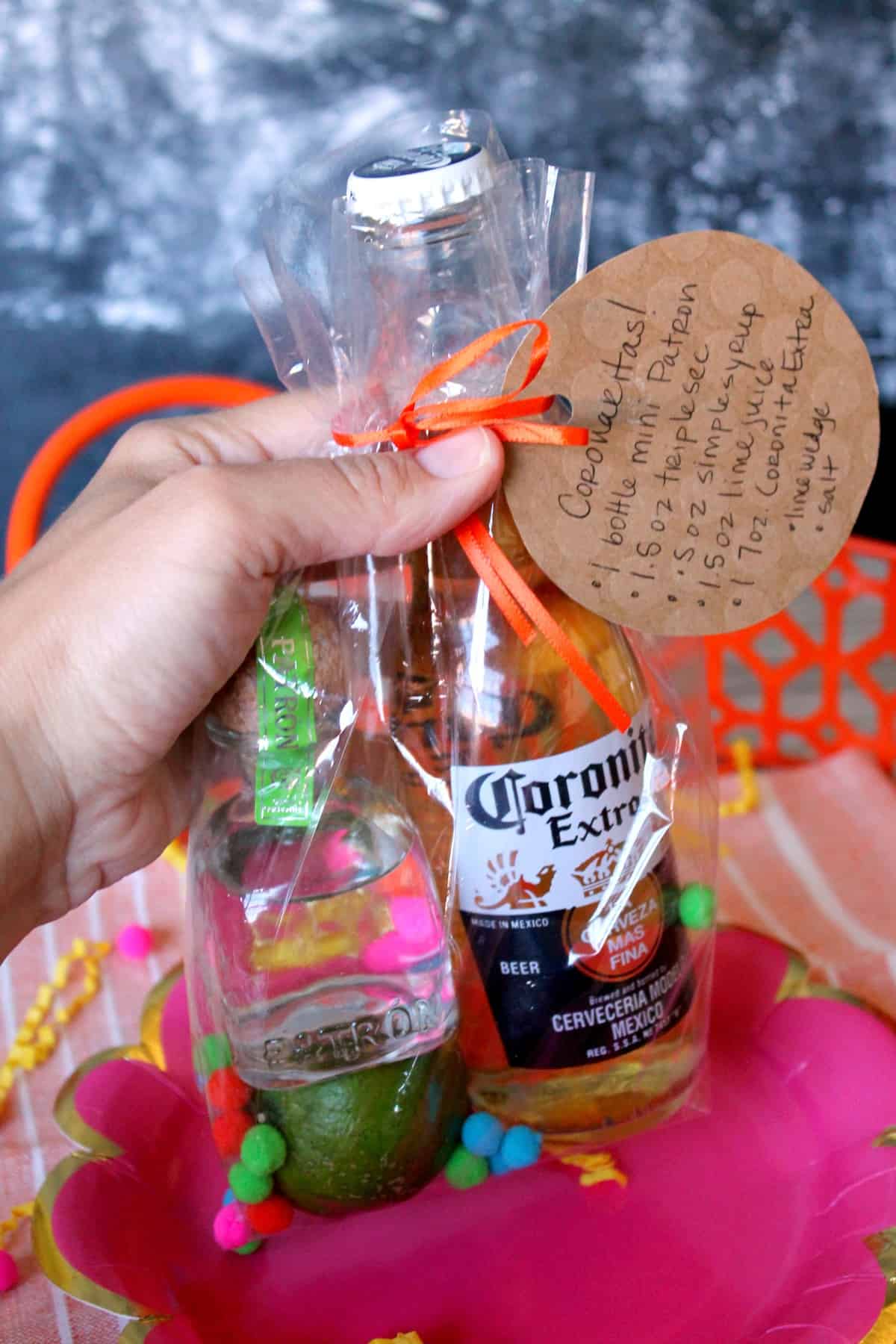 Just a few craft store supplies and a trip to the liquor store is all you need to make these nonintoxicatingly adorable goodie bags! A cellophane bag, mini bottle of your favorite tequila, baby Corona and a lime are tucked into each bag, giving the recipient a head start on mixing up a classic "CoronaRita." {Recipe courtesy of Corona.}  Add a few mini pom-poms from the craft store for a festive pop of color, tie each bag off with a pretty ribbon and a recipe tag, and you've got the perfect party favor.

{As a side note, I didn't even realize until a few weeks ago that baby Coronas existed! As the guy at Total Wine said to me as he handed me the 6-pack, "I'm glad these little guys found a home." Ha!}

So celebrate something or nothing -- but celebrate it with these margaritas! 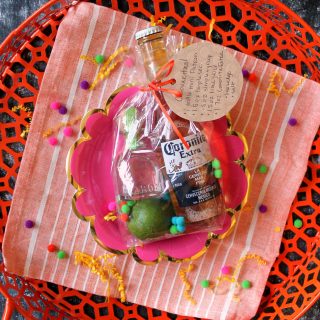 The Kitchen Prep
Let party-goers take the fiesta “to go” with these adorable Margarita Party Favors! A few margarita-making essentials all bundled up in a festive little bag. Bust them out at your Cinco de Mayo party or summer barbecue and there will be “cheers” all around!
Print Recipe Pin Recipe
Prep Time 5 mins
Total Time 5 mins
Course Drinks
Cuisine American
Servings 1 drink