Last week, I kicked off my Motherhood Monday series with the beginning of my birth story. But, much like the actual event itself, it was waaaay too long! So, here's Part 2!

By the time I was officially in "active labor", it was late afternoon on Thursday. We got set up in the room and I felt amazing. The adrenaline rush of knowing that I was really in labor was enough to dull the strong contractions. I got in bed and tried to get comfortable, turning on my HypnoBirthing affirmations and trying to relax.

The nurse assigned to us was absolutely wonderful. She was completely on board with everything we wanted to do and so sweet and helpful. {Thank heavens it wasn't nurse "What makes you think you're in labor?" Whew.} Over the next few hours, I spent time on the birthing ball, waddled walked around the room, tried to watch TV, had my mom and in-laws drop by for a visit and spent time in the jetted tub. Meanwhile, Steve just stayed by my side doing anything and everything to make me more comfortable {and also taking video of how much more subdued my contractions were when I was practicing my hypnobirthing techniques, which he got quite a kick out of}. Just having him there was the biggest help. Aside from squeezing my hips really hard during contractions for the better part of an hour, there wasn't much he could actually do.

Several hours later {I think. It all gets pretty hazy from here.}, close to 3 a.m., my doctor stopped by to see how I was doing. I was barely hanging on to sanity, not so much because of the pain, but because of not being able to rest. {Remember, we were going on day 3 of no sleep.} He brought up the big question: Pain relief.

We had talked at length about keeping things as natural as possible, but I had also let him know that if things got extreme {read: I was in labor FOREVER}, I wasn't opposed to an epidural. For that reason, I had met with the anesthesiologist when we pre-registered so that I could be cleared ahead of time in case I opted to go that route.

The doctor asked me how I was feeling {um.} and asked if I wanted to be checked and have my water broken to speed things up. The only downside would be the intensifying of contractions, which I was fairly certain I couldn't stand right then. He said he figured I felt that way and asked if I had thought about an epidural. Why, yes. Yes, I had. Several times. But I didn't want to do it. I was trying to avoid it as long as possible, but after 2 days and 12 hours of what I had experienced, I wasn't sure how much longer I'd last without hurdling myself out the window.

It was at this point that I was so glad that I switched doctors at the 11th hour and that I found someone who was so understanding. We talked over the pros and cons of the epidural and he asked me {in my delirious state} why I didn't want one. I was honest and said that I wasn't a fan of the thought of needles in my spine, numbness or strong medicine in general. I don't even take Advil unless my head feels like it's about to explode. He expressed his concern about my pain levels continuing to exhaust me to the point of rendering me useless when it was time to push -- a place you definitely don't want to find yourself in the tiring process that is labor.

After talking it over with Steve, we decided that without knowing how much longer I'd be laboring, an epidural was the best course of action for getting some rest before the big moment. I was relieved, but terrified... and frankly a little disappointed at that moment. But good ol' Hypnobirthing affirmations popped into my head: "I am prepared to meet whatever turn my labor takes." Maybe it wasn't the path that I hoped for, but by the time the anesthesiologist came in and administered the epidural, I was at peace with the decision.

{By the way, it wasn't as bad as I thought it would be. I barely felt a thing, though I'm pretty sure I squeezed the crap out of the nurse who let me hold onto her while the whole thing was going down. The anesthesiologist -- let's call him, "Mr. Personality" -- was super quick and impressed with my getting to 6 or 7 centimeters without meds. I wasn't interested in trophies or chatter.}

As it turns out, labor with an epidural is a cake walk. Had I not been exhausted to the point of lunacy, I probably could have gone back to baking. {Except, of course, for the fact that I was numb from the armpits down and couldn't stop shivering for some reason.} Incidentally, not everyone goes completely numb when they have an epidural -- but I did. From my chest down I didn't feel a thing. I could slightly move my left leg but not my right. It was dead weight. A few times it fell off the bed and I had to ask Steve to pick it back up because I couldn't lift it myself. So weird.

The rest of the night went by slowly... but with no pain; just a strange sensation that remains when your belly contracts.  4 a.m... 5 a.m... 6 a.m... Still progressing ever so slowly.

The sun rose on Friday morning, and I was still waiting to be fully dilated. On the positive side, I'd gotten to rest a tiny bit {as did Steve, poor guy}, and I was feeling more capable of putting together a sentence, not to mention pushing out a baby. Did I mention that my parents-in-law, brother-in-law and mom had all stayed in the waiting room overnight?? I felt terrible that they were sitting out there exhausted, but no one wanted to have news of progress more than I did.

Our doctor came in and chatted with us in the morning. There was progress, but I STILL wasn't at 10 centimeters. I asked him how pushing would go if I didn't have any way to feel contractions and he assured me that my body would know what to do. If you say so!

Around 10 a.m., I was checked one last time and the doctor announced that it was time to have a baby. I was excited, but the nurse kept telling me that I was about to start a process that was no picnic. Anything seemed easier than what I had just been through in the past 3 days!

I had hoped to push the baby out in a comfortable position, but because of the epidural, I was stuck with the typical "hold my legs" stance. As I had imagined, pushing was not the easiest without any way to feel when a contraction was coming or any other sensation besides pressure. But I went with it. Because, you know, I wanted to get the kid out before his first birthday.

Meanwhile, the doctor, nurse and Steve chattered away as I huffed and puffed trying to find a rhythm and catch my breath. It was such a strange thing to be somewhere but feel like I was outside the situation. I remember staring at one part of the pattern on the wallpaper with such focus that I thought I might bore a hole into the wall with my eyes. Steve kept on leaning in and whispering words of encouragement and letting me know that I was almost there. {I didn't believe him.}

After just under an hour of pushing {it didn't seem that long... time sort of does weird things when you're in that kind of scenario}, at 10:53 a.m., Cole Thomas made his way into this world and finally graced us with his presence. After THREE DAYS! 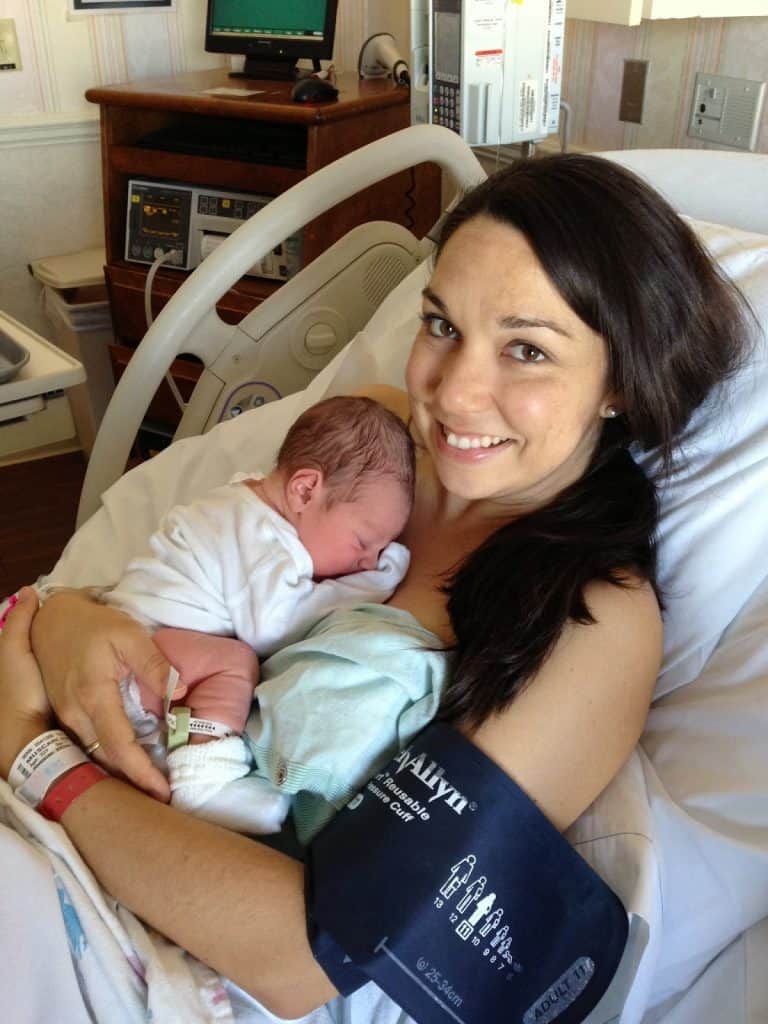 They plopped him on top of me and I looked at him in disbelief -- I couldn't believe I did it. That he was finally here. That this was the little tot that was kicking me and doing somersaults in my belly for 40 weeks. That we had a son. 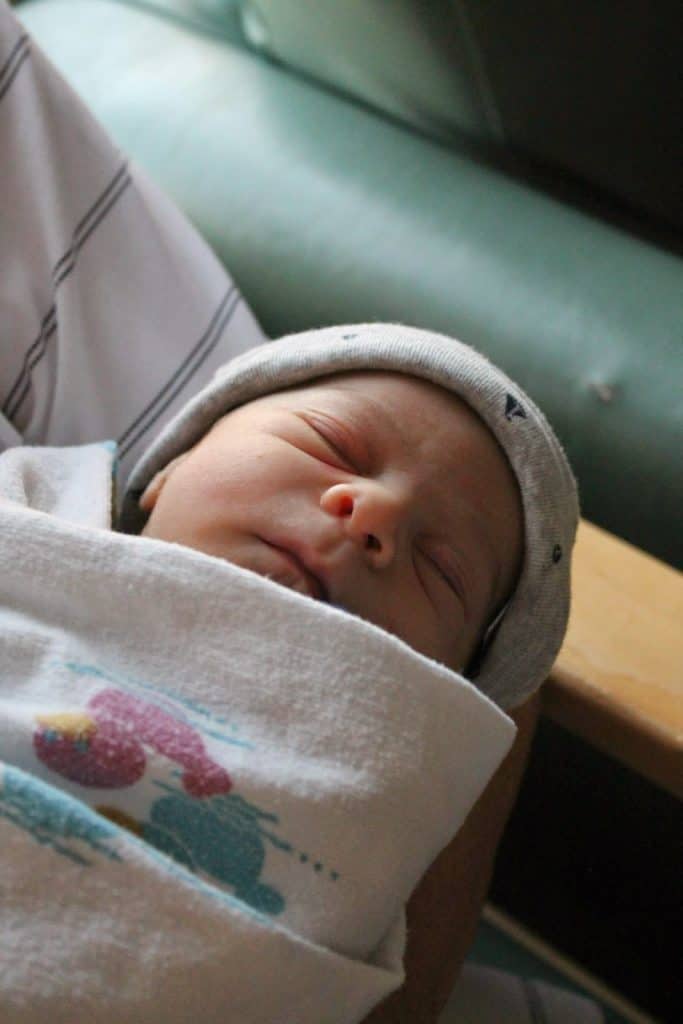 It is true that no matter how tired you were before, the adrenaline you feel after such an experience makes you feel like you could jump up and run laps. That is, if your legs aren't limp noodles. But, more likely than not, you'll opt to stay exactly where you are and stare at your baby like you've never stared at anyone else before because suddenly there is another person in your family.

Cole was healthy, strong and very squished. Three days of being wedged in a pelvis will do funny things to your face. {I'm happy to say his face has now returned to normal.} He weighed 6 pounds, 13 ounces. The perfect little peanut.

So, that's how my labor went down. The thing I'd been thinking about for months on end. It was pretty incredible and I'm so thankful that even though things didn't go exactly how I had imagined {does anything ever?}, the end result was more than I could hope for. Getting through slow labor wasn't easy, but I give all the credit to my amazing husband, my incredible doctor, a fantastic nursing staff and HypnoBirthing. I can't imagine what this experience would have been like had it not been for the strong support I received!

And that's how I officially became a mama. The end to this chapter of the story and the beginning of a lifetime of new experiences. These past few months have been a whirlwind of happiness and tears and learning and insomnia. It's been a challenge to juggle bottles, baking, blogging and life... but we're getting the hang of it {most days}.

I have a lot to share about how motherhood has changed my life -- the good, the bad and the spells of ugly crying {mine, not Cole's}. Every day is a new adventure for sure, and I hope that these posts will be able to help other moms out there. 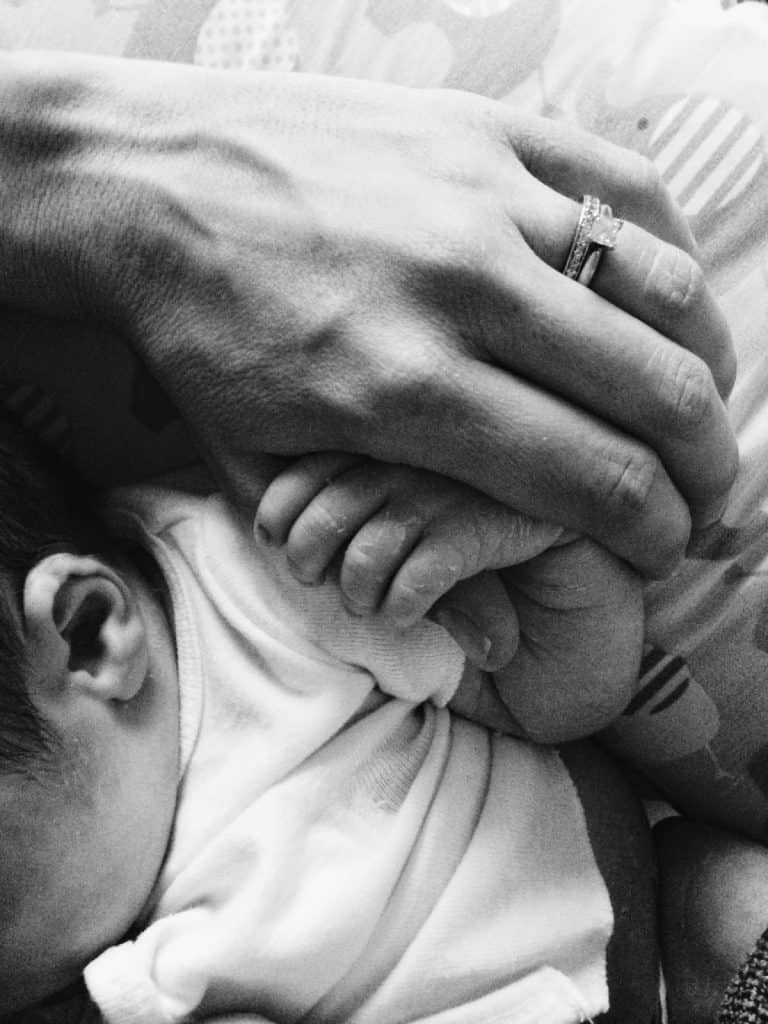 Moms: Feel free to leave me a comment and tell me about your birth experience. Was it what you hoped for?