Somehow I keep managing to attract ice cream related events into my life.

I must be sending ice cream-craving vibes out into the universe or something. No complaints here!

A few weeks ago {ugh, I'm so behind on getting these posts out. sorry.}I was invited to come check out PGA National Resort & Spa's Ice Cream Festival Weekend, and since it's practically in my backyard {and... hello... there was ice cream, people!} I found myself packing my bags for a frozen treat-filled staycation at the beautiful resort.

Steve and I are no strangers to PGA National. We like to go for drinks at iBar as a special date night from time to time and I've been lucky enough to luxuriate at The Spa at PGA National on several occasions. Having a getaway destination so close to home is a wonderful perk! 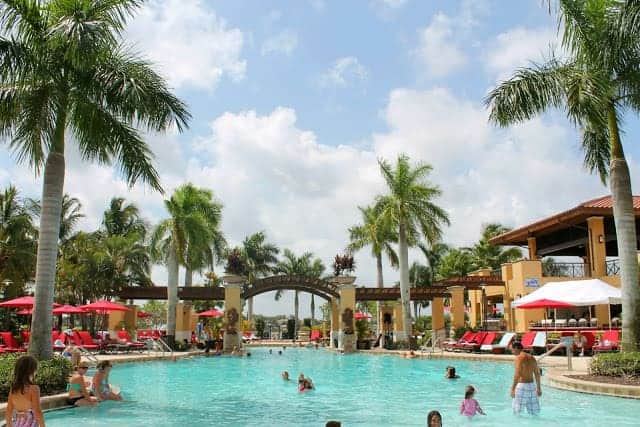 PGA National has a gorgeous pool area, and that's exactly where they kicked off the events on Saturday morning. 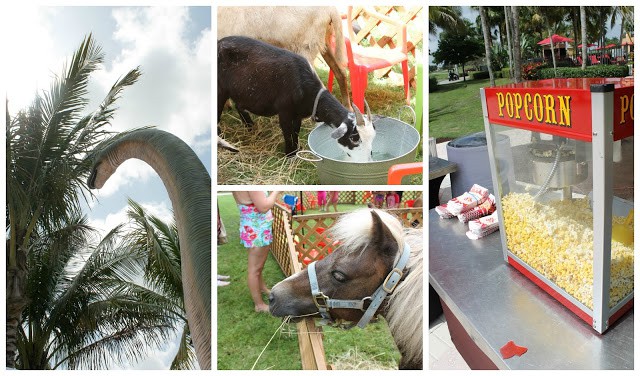 They had all sorts of things for the kiddies including a mini-petting zoo, bounce houses, popcorn & sno-cone stands, and life sized dinos set up for photo opps! {Come to think of it, those things sound pretty fun for adults, too.} But the real fun started with Face Freeze Frenzy, a five minute ice cream eating contest featuring local celebrities and even a few of the hotel's top dogs. 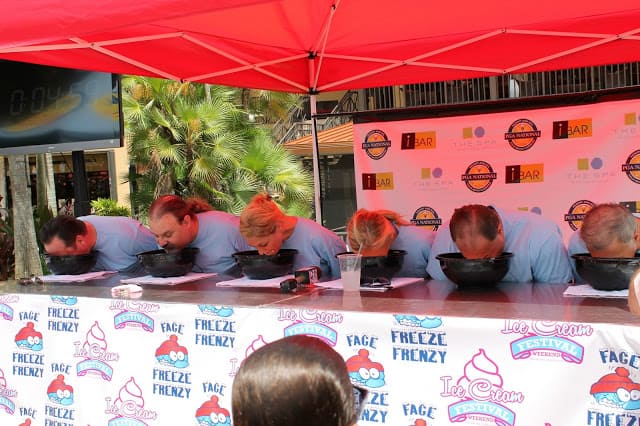 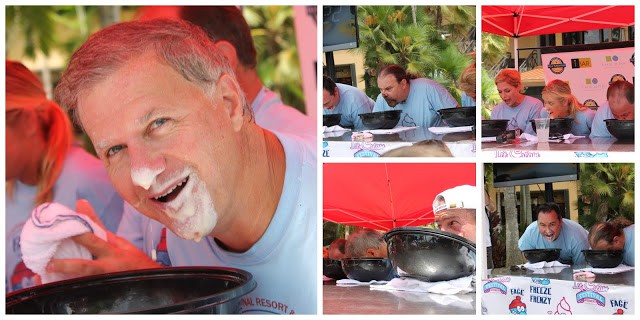 For the record, Michael Lohan {yes, Lindsay's dad...} won the competition, though there was a very valiant effort put forth by all of the contestants!

Soon after, it was time for everyone else to get in on the ice cream action by getting to sample over 30 different ice cream flavors at The Big Taste. There were some fan favorites like Ben & Jerry's Phish Food present, but I made sure to try out some local brands like Luke's Ice Cream, and even some unique frozen desserts like Lifeway's Frozen Yogurt Kefir. 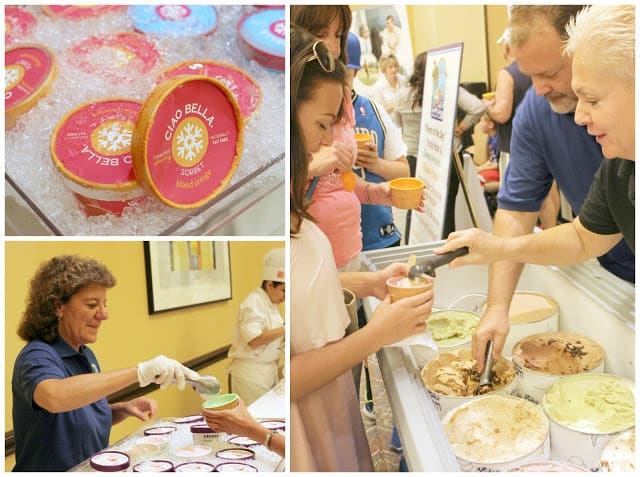 In case some of the wacky flavors being served weren't enough to entice taste buds, there was also a huge toppings bar ready for those who preferred to design their own creative combinations. 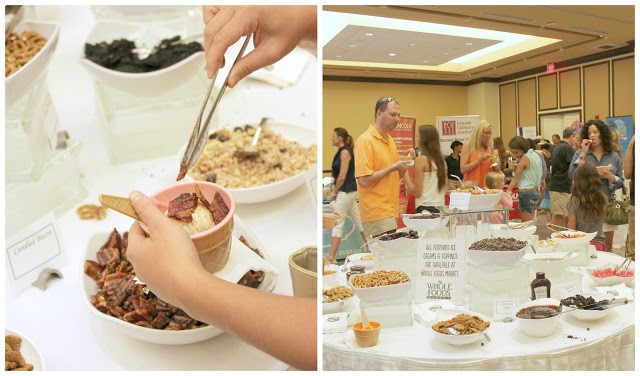 But the old fashioned fun was nowhere near over... that night, a Sock Hop was happening for people of all ages. Classic tunes, poodle skirts, and ice cream floats transported the Palm Terrace restaurant back in time to the 1950's. Everyone had a blast! 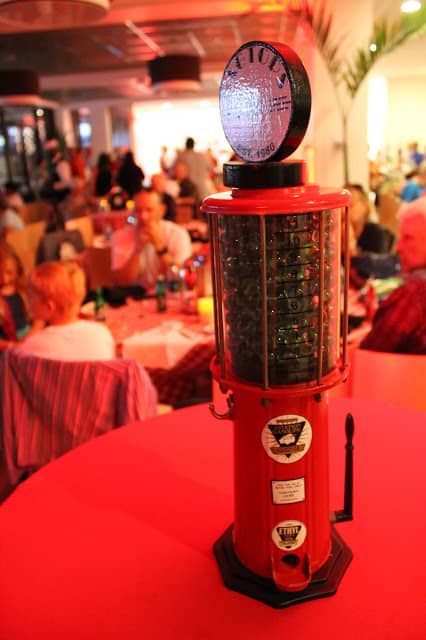 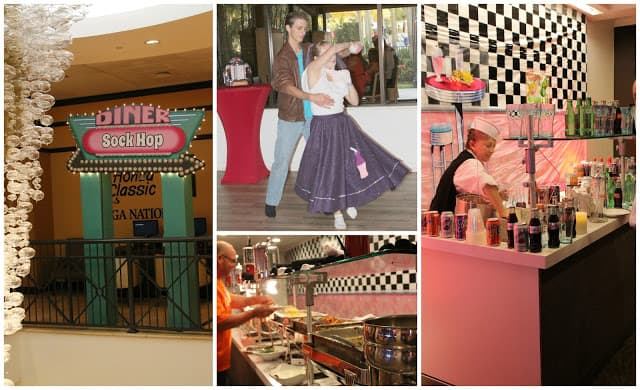 It was the perfect way to wrap up a day of frozen fun.

The following morning, the lobby was all a-buzz with people on a sugar high vendors, families, and ice cream fanatics waiting to take part in creating the World's Longest Ice Cream Sundae. 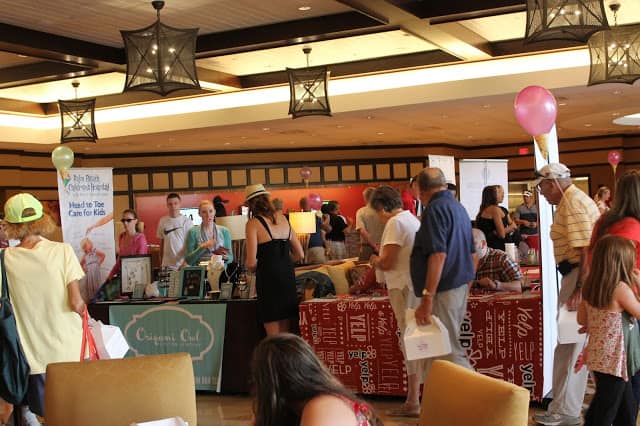 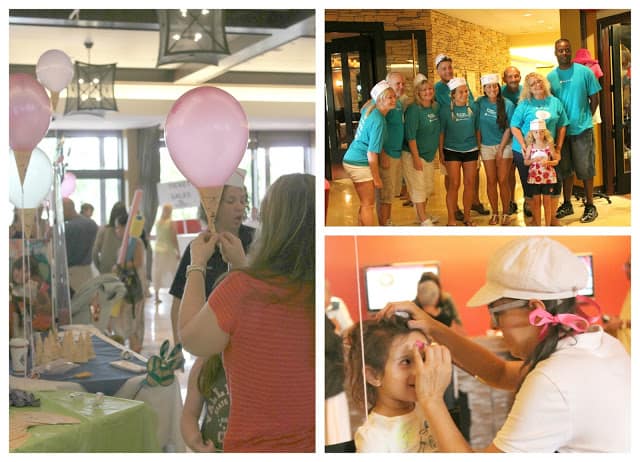 This event was legit, guys. 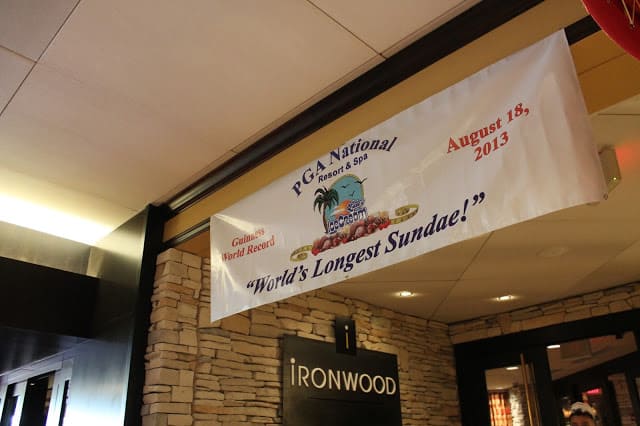 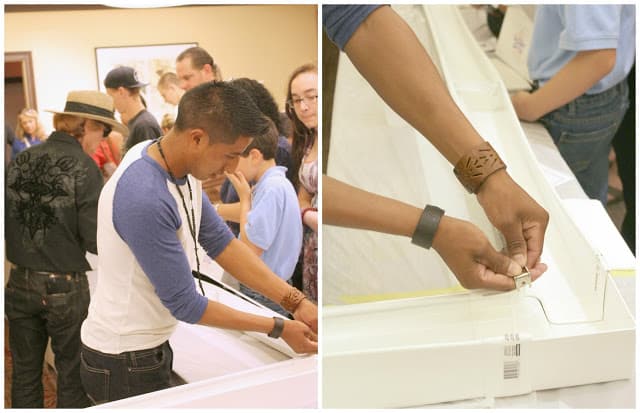 The people from the Guinness Book of World Records were there and everything. They busted out their tape measures and recorded every.last.inch of the winding ice cream "trough" that spanned several hallways and ballrooms,where folks would be scooping and topping their portion of this sizable sundae. 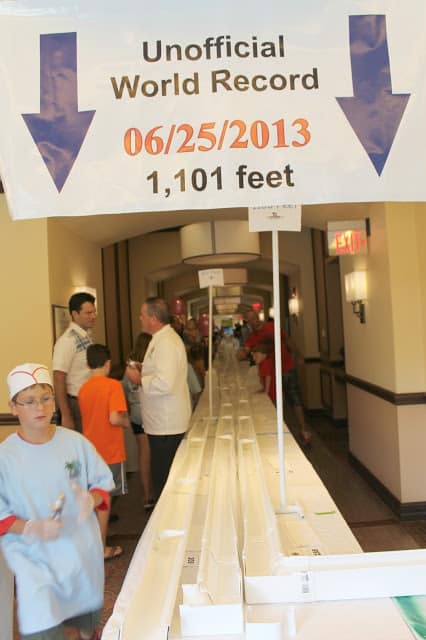 There were some strict rules. Like the the fact that the scoops of ice cream have to touch. And let's not forget that there must be more than 3 types of toppings to fit into the sundae category. {Who knew?} 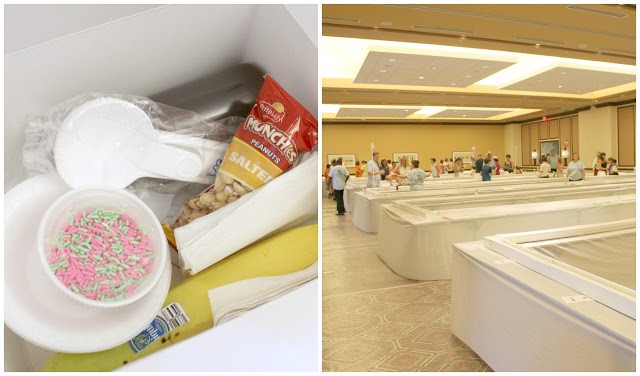 I think they had that covered. 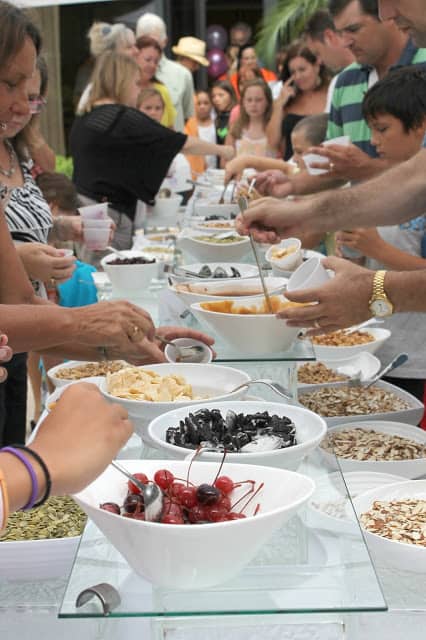 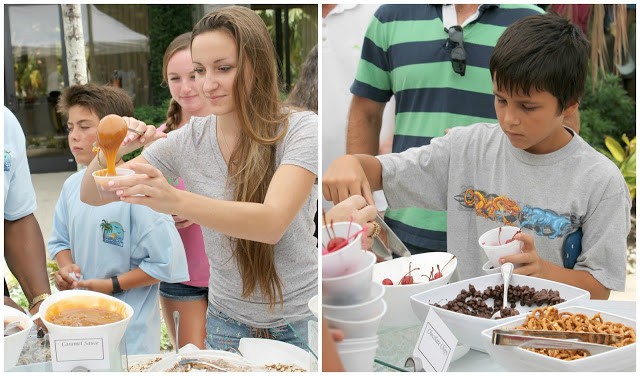 In the end, PGA National went down in the record books with their official sundae measurement coming in at 1,249.9 feet. It took over 1,000 scoop-wielding people, and 350 gallons of frozen goodness to complete the task. 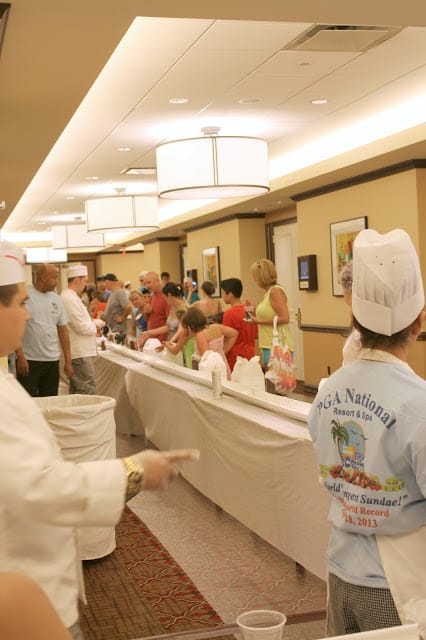 Aside from the record-breaking recognition, there was evidence that the festival was a sweet success: Smiling {and sticky} faces and families who no doubt created some amazing memories.

A big thanks to PGA National Resort and Spa for inviting me to take part in the festival fun!

Suddenly got a hankerin' for a scoop? Check out these fabulous recipes that you can make right at home, or hop over to my "Guess Who Got an Ice Cream Maker?!" Pinterest board for even more ideas. 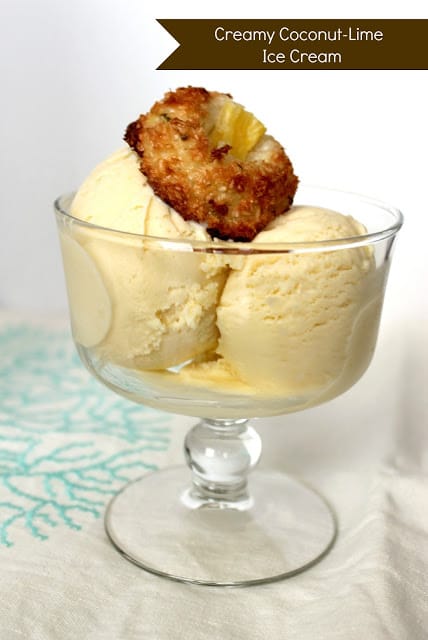 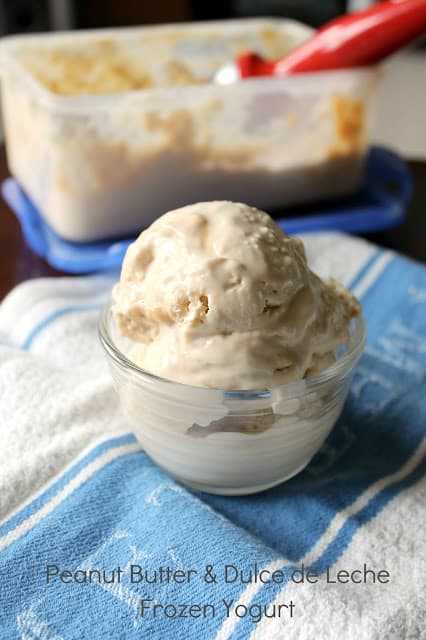 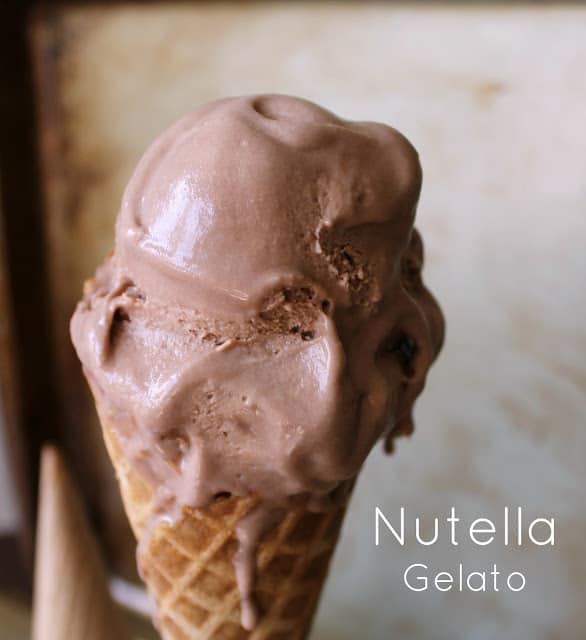 Disclosure: I was given a complimentary overnight stay at the resort and tickets to the events mentioned in this post. As always, the opinions here are all my own!