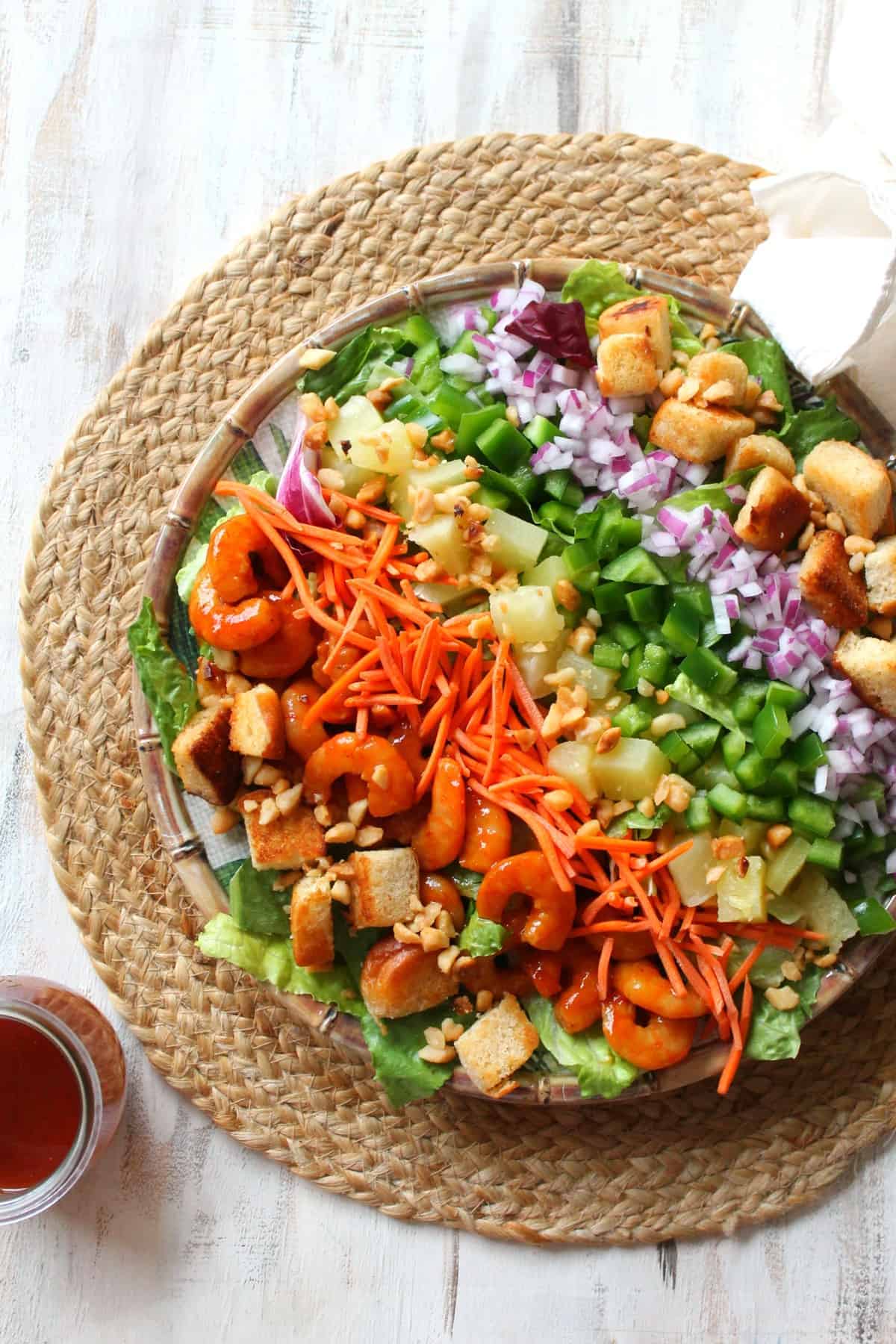 Hawaii has its own gravitational pull. I don't know if it's because of the islands' natural beauty, the warmth of its people or the mystery of its exotic culture, but I can't think of one person who would turn down an opportunity to visit. {Including myself!} Some would say it's Hawaii's "Aloha Spirit" that draws in visitors from around the world to this magical place!

As is the case with many other cultures, food is a big part of the Hawaiian way of life, and it's cuisine -- which comes from a unique blend of flavors from French Polynesia, China, Japan, Portugal, Korea, the Philippines, Puerto Rico, Samoa and more -- is gaining recognition throughout the U.S. In fact, as of May 25, 2016, the second week of June was officially declared National Hawaiian Foods Week by the U.S. Senate!

June 11 marks the beginning of this week-long celebration honoring "Hawaii’s contributions to the culinary heritage of the United States", helping to spread the word about the many edible delights we've gained from Hawaii. King's Hawaiian has partnered with a host of other brands to get us all in a Hawaiian state of mind so we can properly celebrate this occasion, and today, I'm sharing a recipe that includes some of Hawaii's signature flavors in a colorful way!

Since summertime {and potential island getaways} are on the horizon, I've got light, refreshing recipes on the brain. It's no wonder that a bright, bountiful salad was the first thing I thought to make with the ingredients in my Hawaiian Foods Kit. With Israel "IZ" Kamakawiwoʻole's beautiful ukulele rendition of 'Over the Rainbow' as inspiration, I brought all the colors of the rainbow to the dish in my own twist on a Cobb salad gone Polynesian.

I started off with a crisp bed of greens and created rows of flavor and texture using different Hawaiian-inspired ingredients. A saucy row of King's Hawaiian barbecue sauce-glazed shrimp is followed by crunchy carrots, sweet Del Monte pineapple chunks and salty Mauna Loa Macadamia Nuts. Fresh green bell pepper and diced red {or purple, I suppose!} onion continue the produce-filled prism. The entire salad is flanked by homemade croutons made from King's Hawaiian Honey Wheat Rolls and then drizzled with a quick & easy dressing made from a mixture of BBQ sauce and pineapple juice for a touch of smoky sweetness. 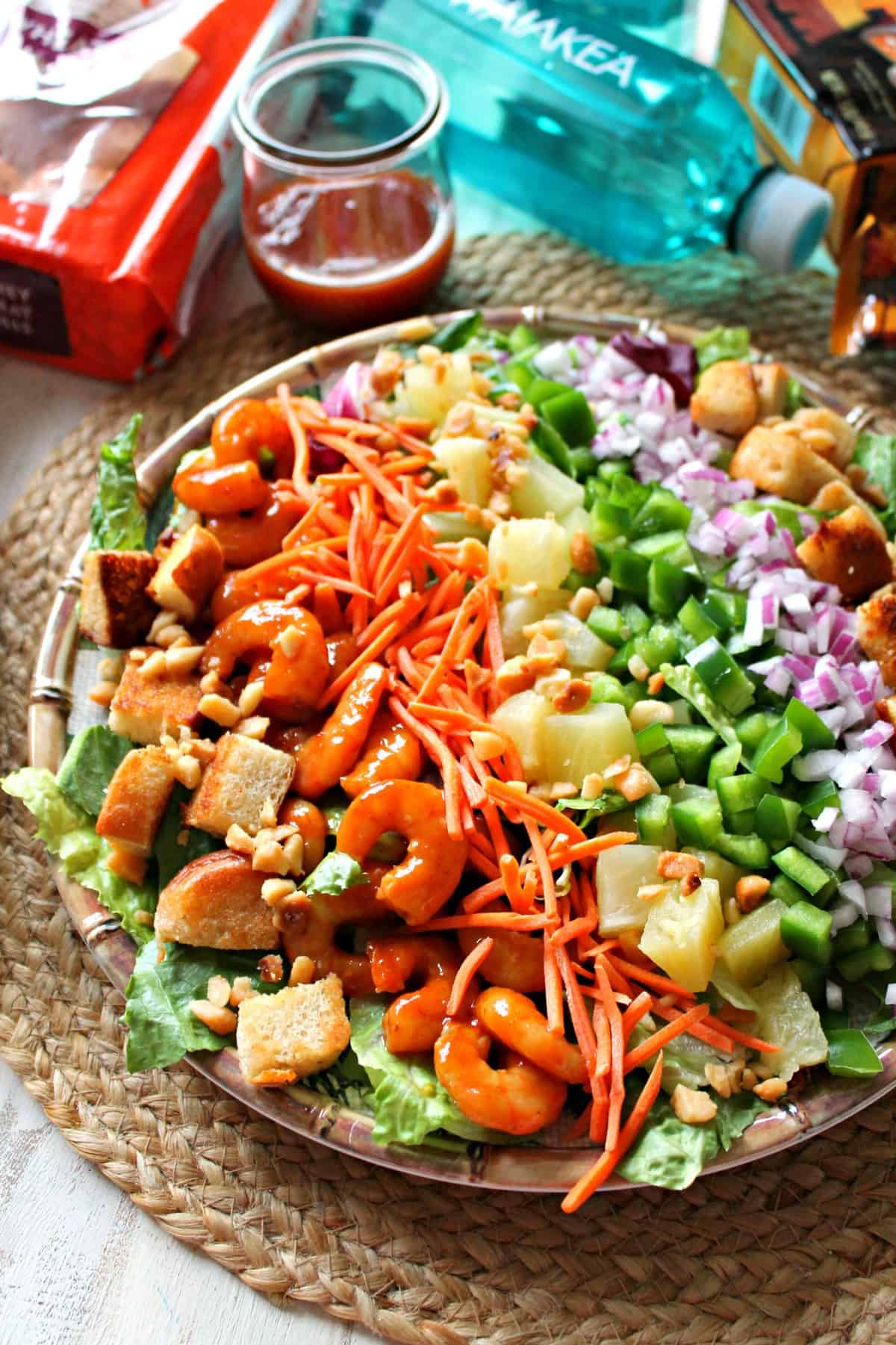 This salad couldn't get any easier to put together, but the presentation is show-stopping enough to make for special summer celebrations. Serve it up as an individual or shared dish, or double the ingredient amounts and present it on a large platter for guests to serve themselves, and don't forget to set out bottles of Hawaii's own Waiakea volcanic water and Hawaiian Host chocolates to sweeten up the soiree!

Even if you can't hop a plane to the islands, the "Aloha Spirit" is easy to capture when you create Hawaiian-inspired dishes with these Hawaiian Week partners! Celebrate Hawaii's inviting food and culture and host your very own tropical feast with the people you love!

For more ways to "Hawaiianize" your meals, head over to the Hawaiian Foods Week page!

I was selected for this opportunity as a member of CLEVER and the content and opinions expressed here are all my own. 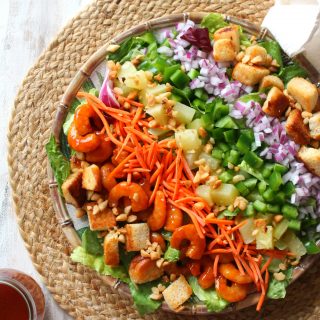