We had an uncharacteristically fun Tuesday this week! Our Gator baseball team was practically playing  in our back yard, so we broke free from the weekday routine and went to the game with a bunch of friends. Lots of fun!

Since the game was going to be around dinner time, I decided to pack a snack to take with us to the stadium and share with our friends. After taking inventory of what we had going on in our kitchen cabinets, I decided on making some delicious sounding cookies from FineCooking.com. I must {sheepishly} admit that I ate more than my share before thinking to give anyone else a taste. 😉 But they were just that.stinkin'.good.! I did get around to sharing with a few of our friends, and they were gone in a flash. I'd say they were a hit (hence the cliche & predictable title post). 😉

Like I said, I happened to have these ingredients on hand, and omitted what I didn't have (pecans). After giving it some thought, I've decided that these would make a great "tropical" cookie by swapping out the pecans for macadamia nuts and omitting the cranberries. No matter what combo of add-ins you choose, these cookies won't disappoint!*

Enough of this blabber... Here's the recipe! Enjoy! 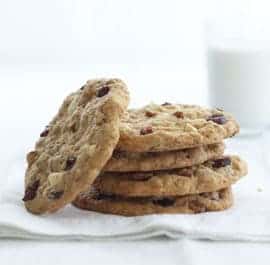