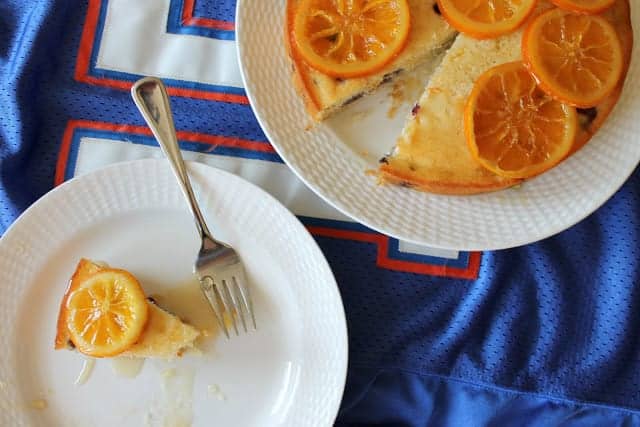 So, in case you didn't already know this... I'm a Gator fan. Have been about as far back as I can remember, when I didn't even know that being a Gator was rooted in some deep, football-watching tradition. {I grew up in a household of non-football watching women, and even my dad was never into the sport. Blasphemy, I know.} Mostly, I just knew that getting to be a true Gator would be a privilege I would have to earn.

When my older sister {who is 7 years my elder} got accepted to the University of Florida, I knew right then and there that I, too, would one day make my own journey to The Swamp. And I did.

My Gator college experience was, in short {for the sake of time and incrimination energy}, amazing. I emerged even more of a Gator than when I entered, if you can believe it.

And then I married a fellow Gator {he was actually my neighbor during my first year in Gainesville}, and our Gatorness grew exponentially. It's true. We can be "those people", especially during football season.

Lately, the nation has been swept away - whether off their feet or into a frenzied fit of rage, you decide - by a former Gator who has become pretty well known for his unbelievable ability to turn completely rational human beings into stark raving lunatics by simply throwing a football and, well, being pretty darn cute.

My husband has a man-crush on Tim Tebow. My Facebook news feed is swamped {no pun intended} by ranting Tebow lovers and haters alike after any given Broncos game. Pictures of people "Tebowing" all over the world have become the next idiotic big thing to post. Those who have never picked up a Bible in their life have flipped through the pages {ok, or Googled} to read the verse good ol' Timmy has displayed on his eye black.

Whether you swoon at his "Aw, shucks" disposition and die hard faith in God, team, and country, or gag at the phenomenon that he has become, I think it's safe to say that Tim Tebow, our humble little Gator, has made a mark on the world.  And it just so happens to be an Orange & Blue one, even after hanging up his Florida jersey. 🙂

So, as cheesy as it may be, today's recipe is in honor of Tim Tebow, man of the hour. 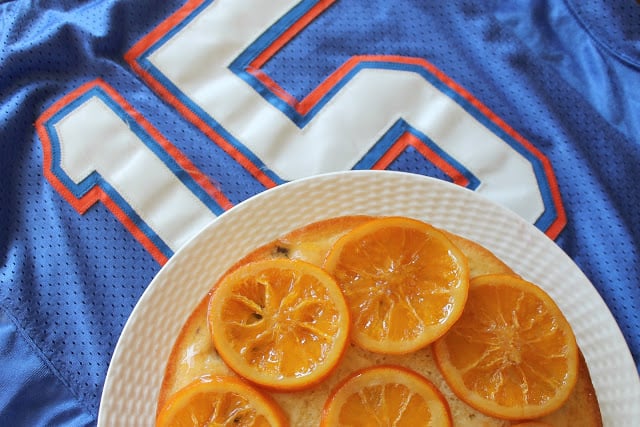 ⅔ cup milk {I ran out and used Half & Half}
2 tablespoons olive oil {Yes, olive oil. Just go with it.}
2 tablespoons butter, softened {I actually forgot this when I made it. I was a mess in the kitchen today.}
1 egg
1 teaspoon vanilla
¼ teaspoon almond extract {optional}
½ cup blueberries {fresh or frozen}
3-5 Candied Orange Slices, finely chopped - I'd say this is optional if you don't feel like doing the candying. But I'd replace with some orange zest.

1. Preheat oven to 350 degree F. Lightly grease and flour a 9 x 1 ½-inch round baking pan; set aside.
2. In a large mixing bowl combine the flour, sugar, baking powder, and salt. Add milk, oil, butter, egg, vanilla and almond extract if using. Beat with an electric mixer on low speed until combined. Beat on medium speed for 1 minute. Gently fold in chopped Candied Orange Slices {or orange zest} and blueberries. Pour batter into prepared pan.
3. Bake for 25 to 30 minutes or until a wooden toothpick inserted near the center comes out clean. Remove and cool in pan on a wire rack for 10 minutes. Remove cake from pan. Cool completely.
4. Place cake on a serving plate. Arrange Candied Orange Slices on top of cake. Drizzle with 1 tablespoon of the orange syrup. Makes 8 to 10 servings 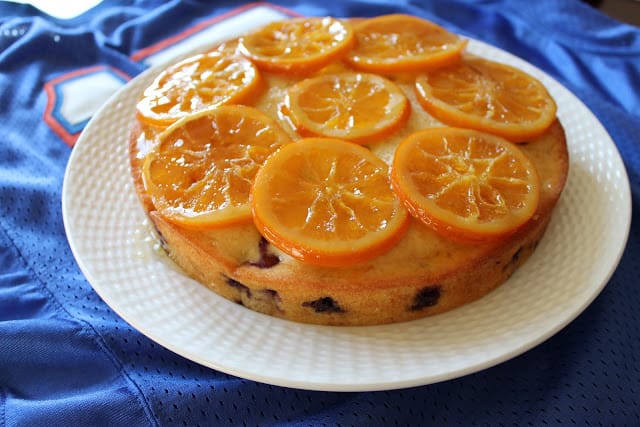