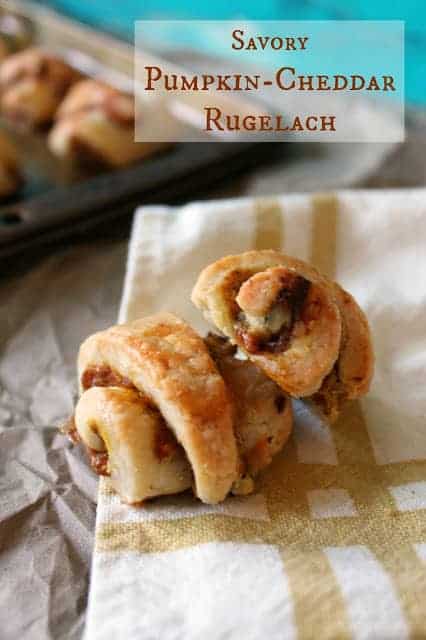 I know, I know. More pumpkin. I can't seem to help myself.

A few things have finally happened around here that suggest fall might actually be on its way:

1. According to my dashboard, the temperature dipped down to a *crisp* 69 degrees this morning. Woo!

2. I have seen/heard of several roadside pumpkin patches {and just about every other picture on my Facebook feed shows little ones posing with said pumpkins}.

3. There was only one can of pumpkin puree left on the shelves at Target.

I totally snagged it so I could make these. Score. 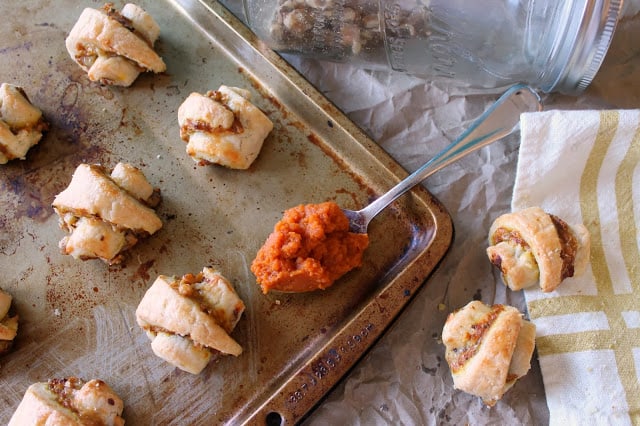 Have you ever tried rugelach? I remember my mom would buy them sometimes when I was younger. They came in a clear plastic cylinder, giving me a clear view that the contents were nothing to be excited about. Though I knew they were considered a "treat" I couldn't quite understand the appeal... probably because, while they were sweet, they were usually filled with fruit & nuts. And in my kid-brain, fruit & nuts equaled adult food. Therefore, yuck. {Very logical.}

It wasn't until I was a bit older that I started to appreciate them. Tender, flaky, melt-in-your mouth crust. Delicious filling all tucked and rolled into each swirled little cookie. {And I discovered that they can sometimes contain chocolate, too. That might have helped my change of heart.} What's not to love?

As much as I love rugelach with a sweet filling, this recipe for savory rugelach caught my eye immediately. In fact, I pinned them as soon as I saw them shared by King Arthur Flour... and then promptly forgot about them.

I'm really glad the thought of these popped into my head again this week. Because They.Are.GOOD.

Like, "Maybe I won't tell anyone I made these and I'll just eat the whole tray" kinda good.

{Though I don't recommend doing that or anything.} 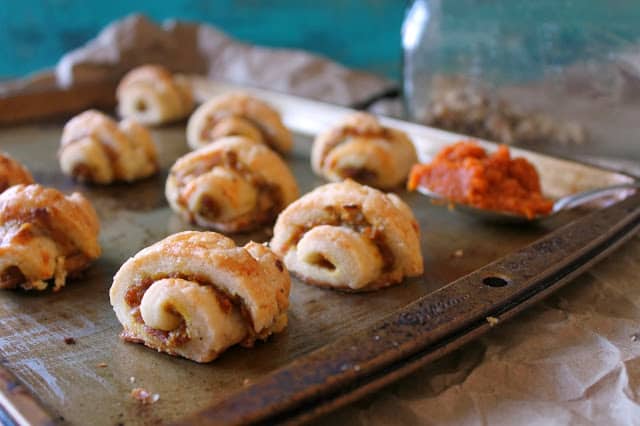 You know what these would be perfect for? {Besides devouring, of course.} A little wine night with the girls. Or as a savory little appetizer to hold over hungry stomachs before Thanksgiving dinner. Or really, for no other reason than to have a delicious snack to nibble on any day.

While the original recipe called for the combination of pumpkin and Parmesan, I decided to use some Cabot Farmhouse Reserve Aged Cheddar, mostly just because it sounded like a good idea. {It was.} The addition of sage and onion give the pumpkin an even warmer, more inviting flavor.

So, are you guys all pumpkined-out yet, or what? What other types of fall recipes are you hoping to see around here... I'm open to suggestions! Leave me a note in the comments or hop over to my Facebook page and let me know what you're thinking. 🙂

3. Meanwhile, heat 1 tablespoon of oil in a small skillet over medium-high heat. Add onion and stir, cooking until translucent and tender, about 5-7 minutes. Sprinkle with ground sage and chili powder and cook, stirring, for about 1 more minute.

4. Add pumpkin puree, salt and pepper. Stir together with onion and cook for about 5 minutes, or until the pumpkin has lost some of its moisture.

5. Remove rolled pastry circle from refrigerator. {Make sure that it is able to be removed from the surface you have it on, then dust with flour and set down again.} Spread pumpkin mixture onto the circle, leaving about ¼ inch border. Sprinkle cheese and walnuts over top of pumpkin.

6. Using a pizza cutter or very sharp knife, cut the dough into 16 wedges. {The easiest way to ensure they're equally sized is to cut in half, then in half again, and proceed until you have 18 long triangles.}

7. Starting at the wider end, roll each triangle up, then place on prepared baking sheet. Continue until all pieces are rolled. Brush each with egg wash.

8. Bake for 20-25 minutes or until the rugelach are lightly browned.

Remove from oven and place on a cooling rack to cool down. {Be careful, they're sort of fragile when they first come out of the oven.}