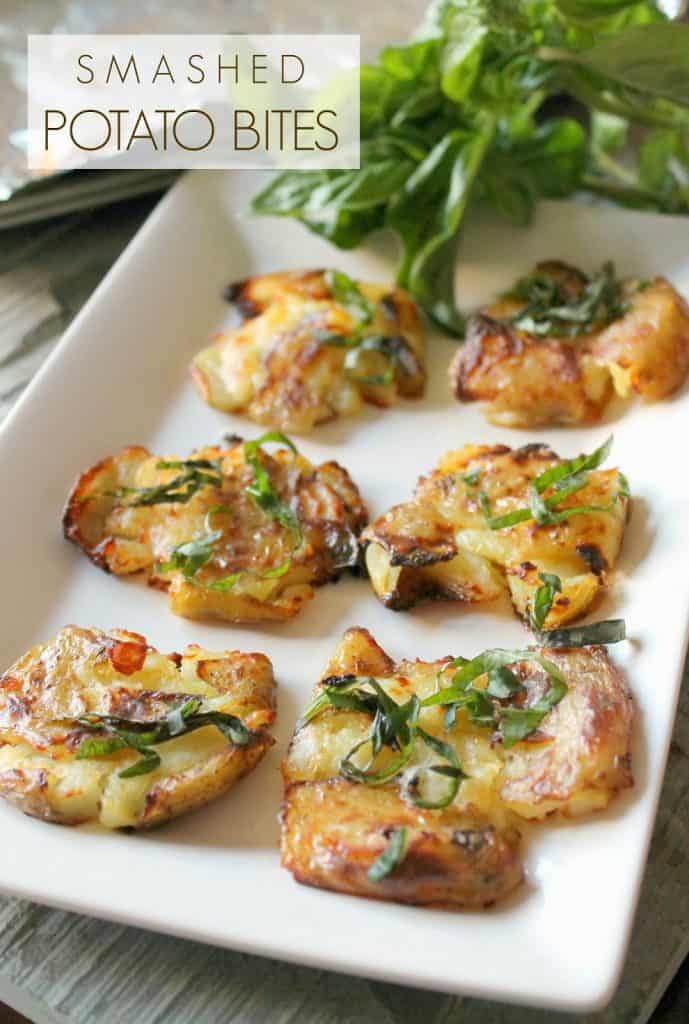 Let's celebrate the little joys of this week, shall we?

1. We have made it to Friday. {Hooray!}
2. I have a new cutting board after the untimely demise of the one we've had since my bridal shower 5 years ago.
3. This.
4. Ten of my photos were accepted to FoodGawker this week. TEN! I attribute 98% of this to the fact that their new uploading/cropping function has made it so much easier to submit pictures. And maybe about 2% to my pictures not sucking quite so much anymore. Baby steps.
5. I've survived Day 2 of no caffeine in the morning {without attacking anyone}.

I've been wanting to switch to decaf/herbal tea in the morning for a long time, but the times I've tried before haven't been completely successful. Have you ever had a caffeine withdrawal headache? Yeah, it's not pretty. I tried the no caffeine thing once during my days as an elementary school teacher. I highly advise against working with 30 loud little people so very early in the morning without caffeine as a buffer.

Though I limit myself to just one cup in the morning {none throughout the day} I've still managed to become hooked on that early morning jolt. I'm once again determined to find a new routine that brings me as much joy as my morning cup, minus the buzz. In preparation, I went on a little tea shopping spree, buying some yummy-sounding decaf flavors by Stash Tea. I cannot wait for them to arrive. {Hurry up. Did I mention impatience is another side effect of caffeine withdrawal?}

So far, so good, I guess. Aside from feeling like I'm in a zombie-like state in the afternoons, all is going well. Except, of course, for the fact that it's very hard to motivate oneself to do anything but stare at the wall during those first few hours of the morning. Or that post-lunch lull. Or while you're supposed to be working on new recipes in the late afternoon. 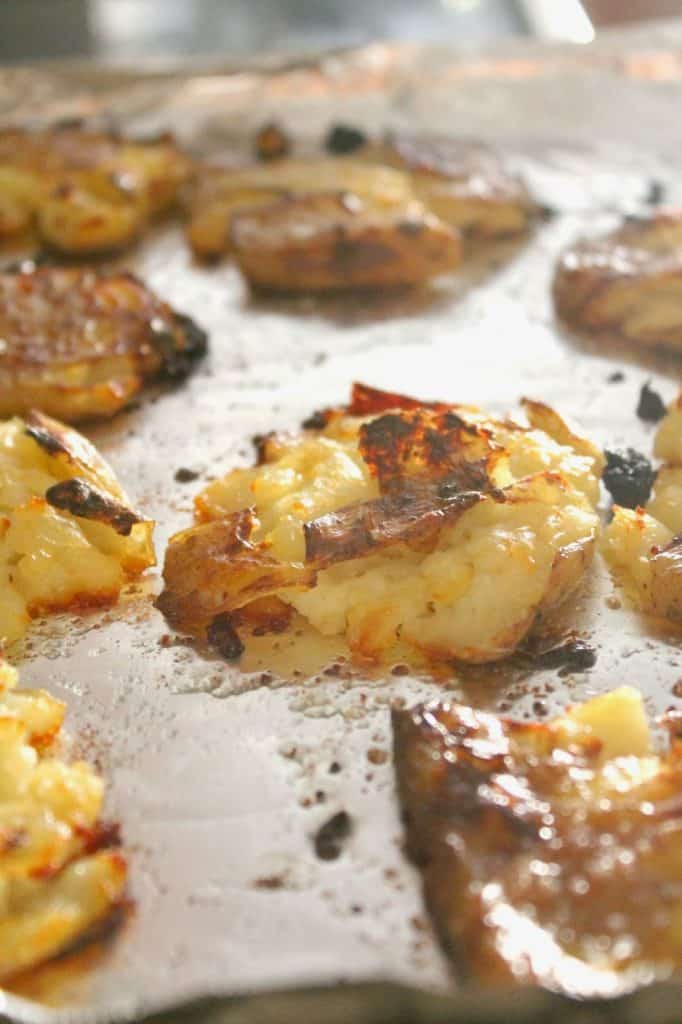 That might explain why I'm calling these a "recipe." Please forgive me. Actually, make these first and take a bite, and then forgive me. Because though they are not a mind-blowing technique or cutting edge flavor combo, they are good. So, so good. 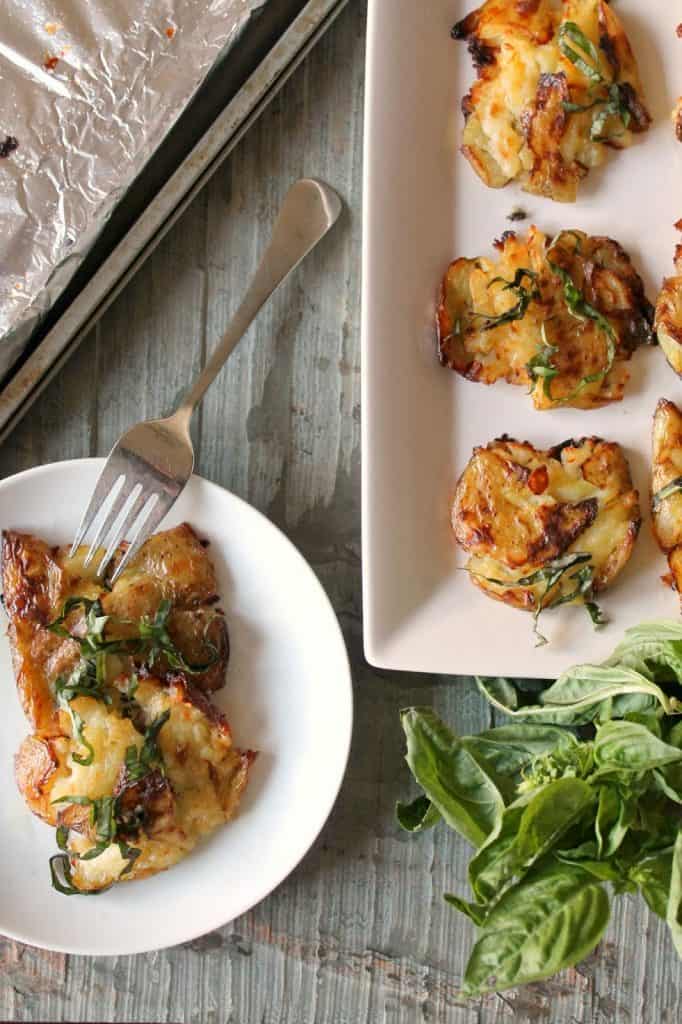 Dainty little potatoes are boiled until they're softened, then smashed {you know, to relieve some of that aggression} and roasted until golden and crisp around the edges. Garlic-infused olive oil gives them a hint of savory flavor. Topped with a sprinkle of sea salt and fresh herbs, these are the easiest dish you'll want to make over and over again. 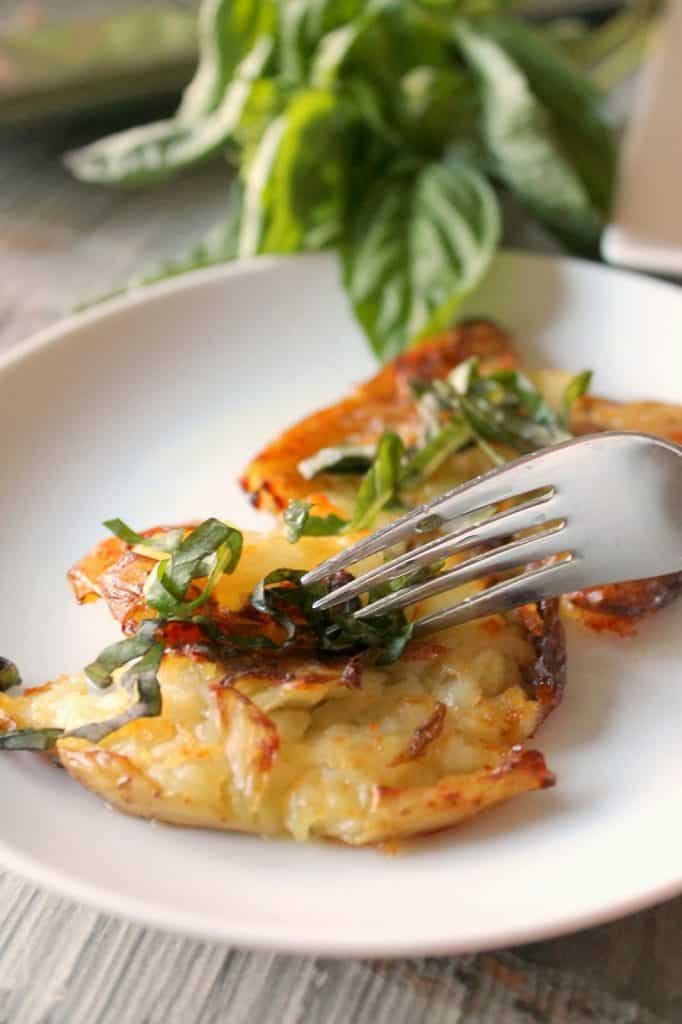 Those of you who have weaned yourself from the death-grip of caffeine, please tell me how you've accomplished this feat. I beg of you. And tell me it gets better. {Even if you're lying.} Otherwise, prepare yourself for my next post: How to boil water.

1. Preheat oven to 450 degrees. Place the potatoes in a large pot and fill with water until they're just covered. Bring to a boil over high heat, then reduce heat slightly and simmer for about 20 minutes or until the potatoes can be pierced with a fork but still have a little resistance.

2. Meanwhile, place the smashed garlic clove and oil in a microwave-safe cup {I use a measuring cup with a spout for easy pouring} and cook for about 40 seconds on high or until the garlic is fragrant.

3. Carefully drain potatoes. Using a clean kitchen towel or parchment paper, cover each potato and give it a light "smash" with a heavy bottomed pot or the bottom of a drinking glass. Don't smash too hard, you want it to somewhat maintain its shape.

4. Prepare a baking pan by drizzling a little bit of infused oil on the bottom and rubbing to coat. Place smashed potatoes onto the pan. Pour about 1 teaspoon of oil over each potato. Sprinkle with sea salt.

5. Roast for about 20-25 minutes or until the potatoes are golden and crisp around the edges. Remove from oven and top with fresh chopped herbs.